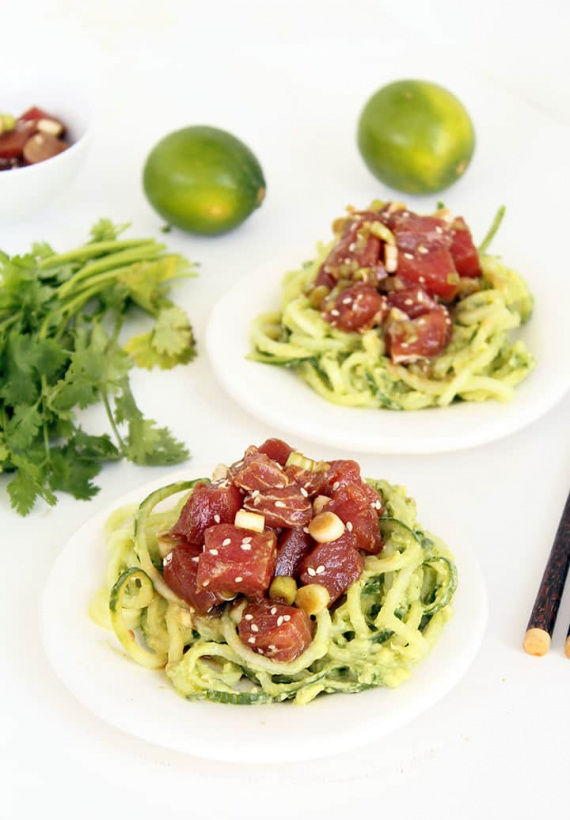 Recipe by Vegetables, Noodles, Seafood, Cucumber
I used to visit California a lot. I would go for work trips and then...
jump to recipe
share this recipe 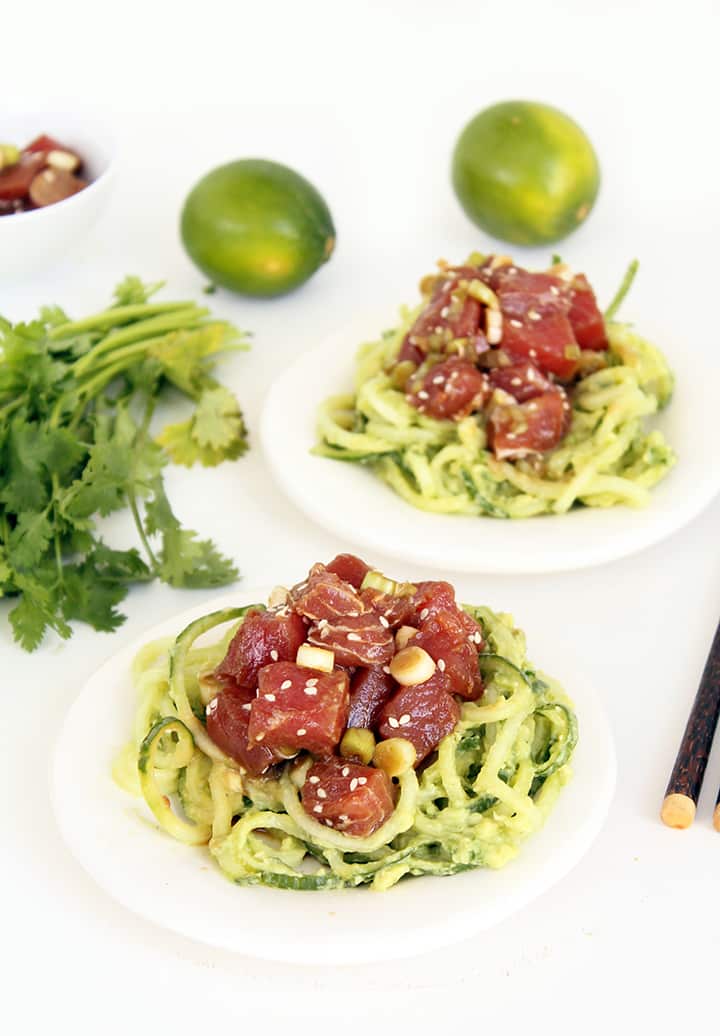 I used to visit California a lot. I would go for work trips and then also, I’d go to visit one of my best friends, Cassidy, who now lives in Brooklyn (she moved here earlier this year!)

One of the things I loved most about California (aside from the year-round perfect weather and picturesque, Amalfi-coast like views) was the various cultural influences on their cuisine. 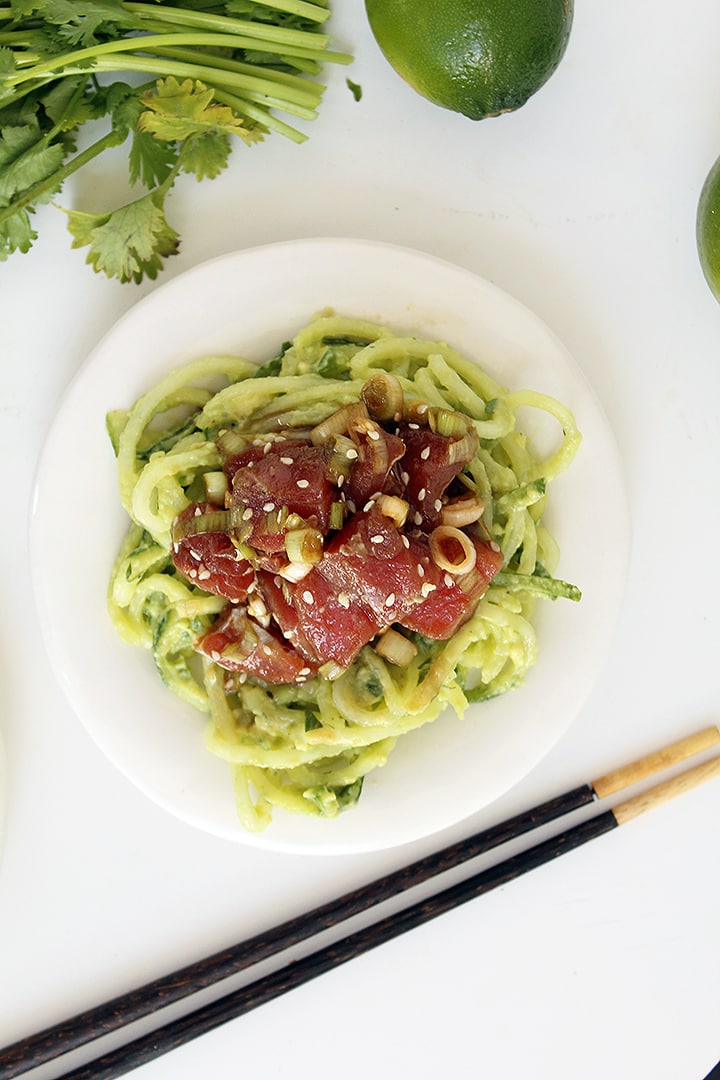 Due to California’s proximity to Hawaii, Asia and Mexico, there’s a lot of variety in flavors happening over there. One day, while visiting a friend in San Clemente, in Southern California, I went to this gorgeous restaurant on the pier. As we watched surfers by the beach, we had quite the eclectic meal, full of crispy fish tacos, sushi and ahi-tuna poke with avocado. We ate it all.

What? I was on vacation!

What impressed me most out of all of those mini-meals was the ahi-tuna poke. Tuna poke is basically marinated bite-sized pieces of sashimi grade ahi tuna (typically marinaded with sesame oil, soy sauce, sesame seeds, scallions and some sort of spice.) 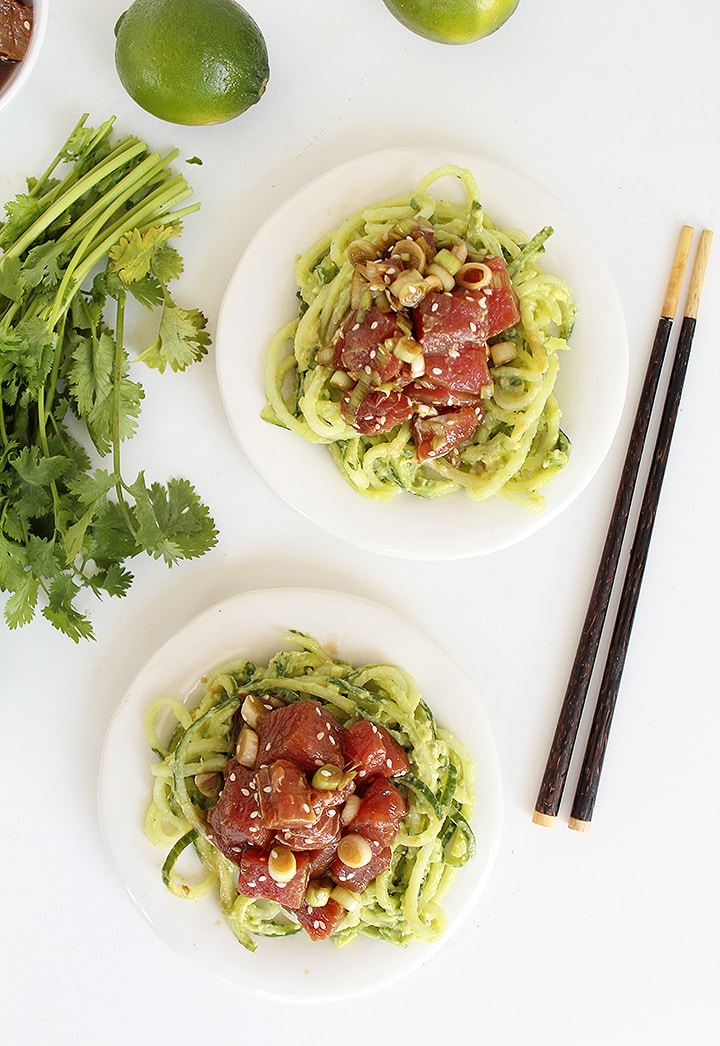 The tuna poke wasn’t what impressed me, though – it was that it was sitting on a bed of cubed avocado and cucumbers with a cilantro drizzle. I mean, what sounds better than that? California, you’re killing it!

However, this recipe wasn’t brought on by that experience – although afterwards, I said to myself, “Oh yea, this is just like that time in San Clemente……”

This recipe was brought on my quest for the perfect honeymoon destination. Yes, I’m already thinking about my honeymoon! I’m getting married on June 20 of next year (mark your calendars!) and will be honeymooning with my soon-to-be-husband Lu right after. 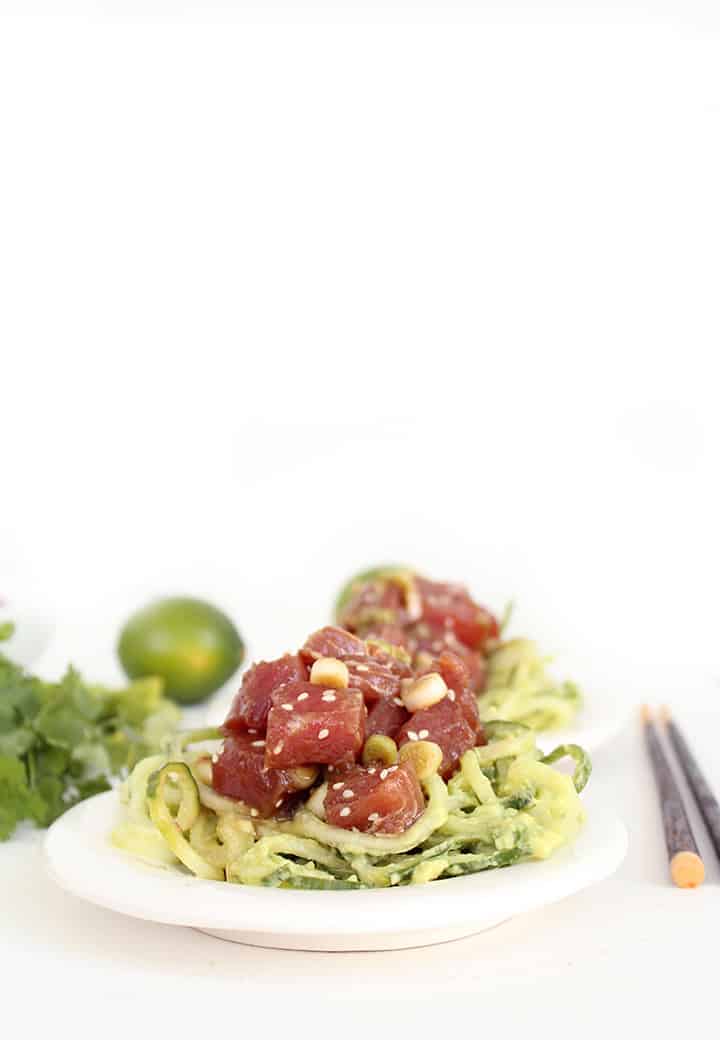 Every night, we Google “Honeymoon destinations” hoping to find something new, only to be brought back to the vicious cycle of “well, what if we just go back to Greece?” We went to Santorini and Mykonos last year and it was the best trip of my life, so now, it’s going to be hard for us to beat.

Top contenders (aside from Greece) are:

4. Napa Valley and then Hawaii

While I was looking into hotels in all of those places, I checked out each spot’s menus (duh – the food’s the best part!) and stumbled upon a poke dish (at a Hawaiian hotel) not much different than the one I had that time in San Clemente.

The next day, I ran out to the store, bought the ingredients and whipped up my own spiralized version – which is even better than the California version (but lacking the gorgeous veranda, sunset and amazing breeze.)

You’re going to love this recipe – it’s easy to make, it’s flavorful, it’s eclectic and of course, it’s healthy. The dressed cucumber noodles make this poke a complete meal (typically, poke is served as an appetizer or salad.)

So… where should we go on our honeymoon? Help! 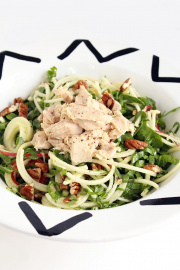