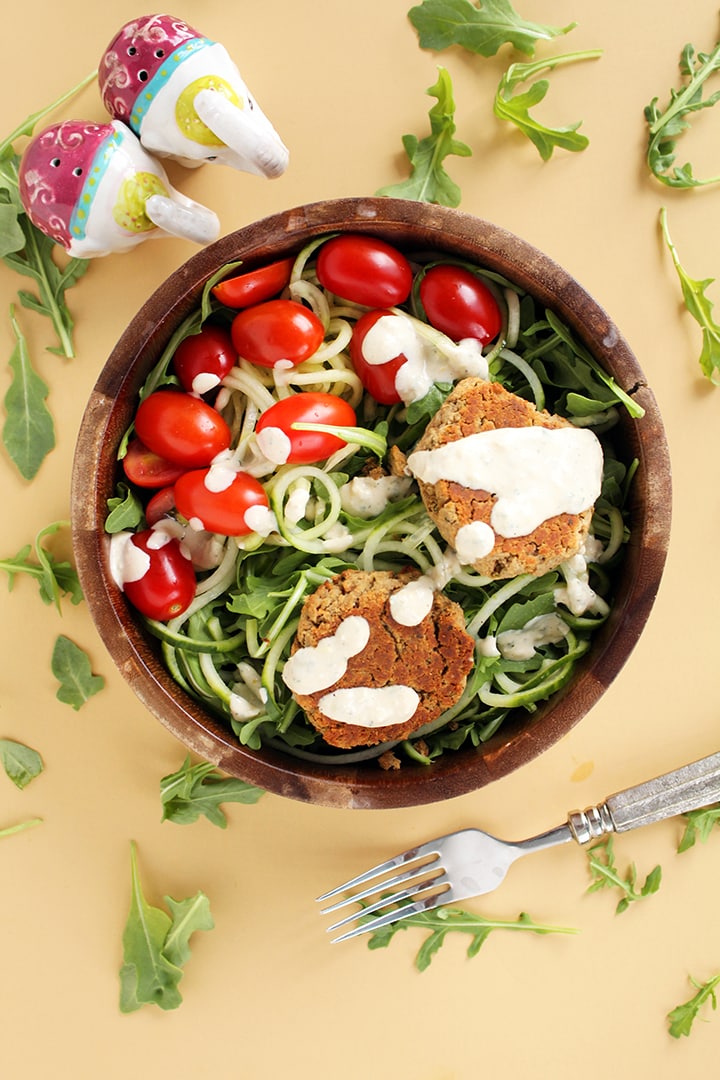 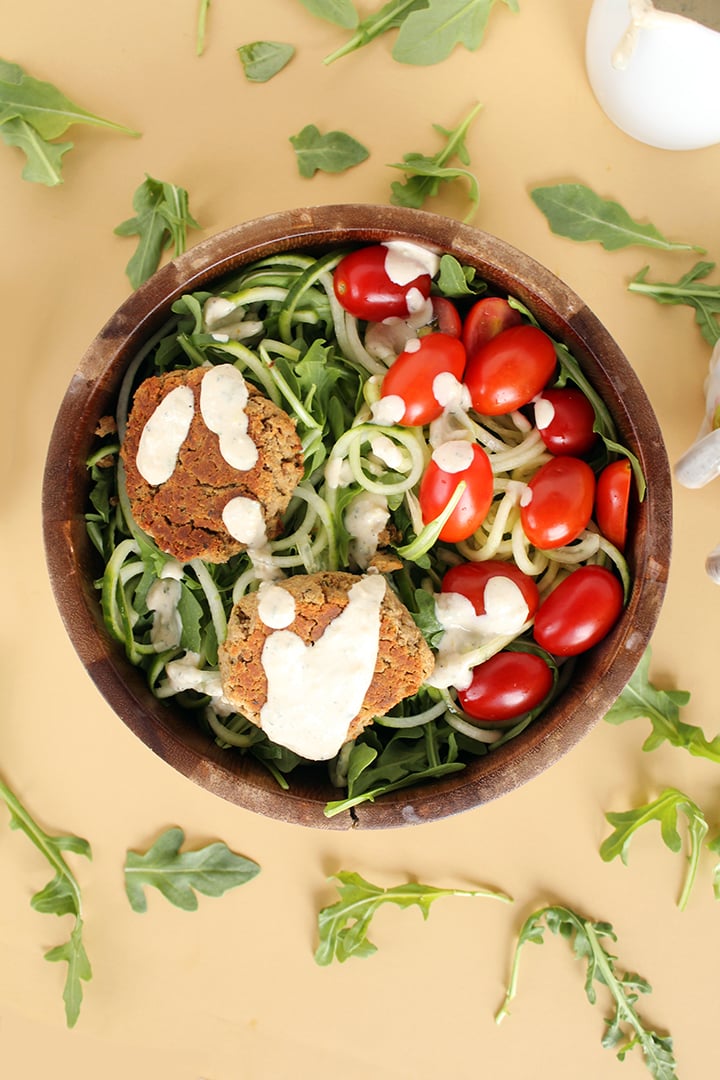 This was my first time making falafel. I had to try it twice before I got the seasonings right. However, the process itself is so easy, I can’t believe I haven’t tried this before (because I love falafel!)

Basically, you place a bunch of clean ingredients into a food processor and pulse until its a “paste” that you can mold with your hands. Then, you pop them in the oven – et voila, falafel patties! 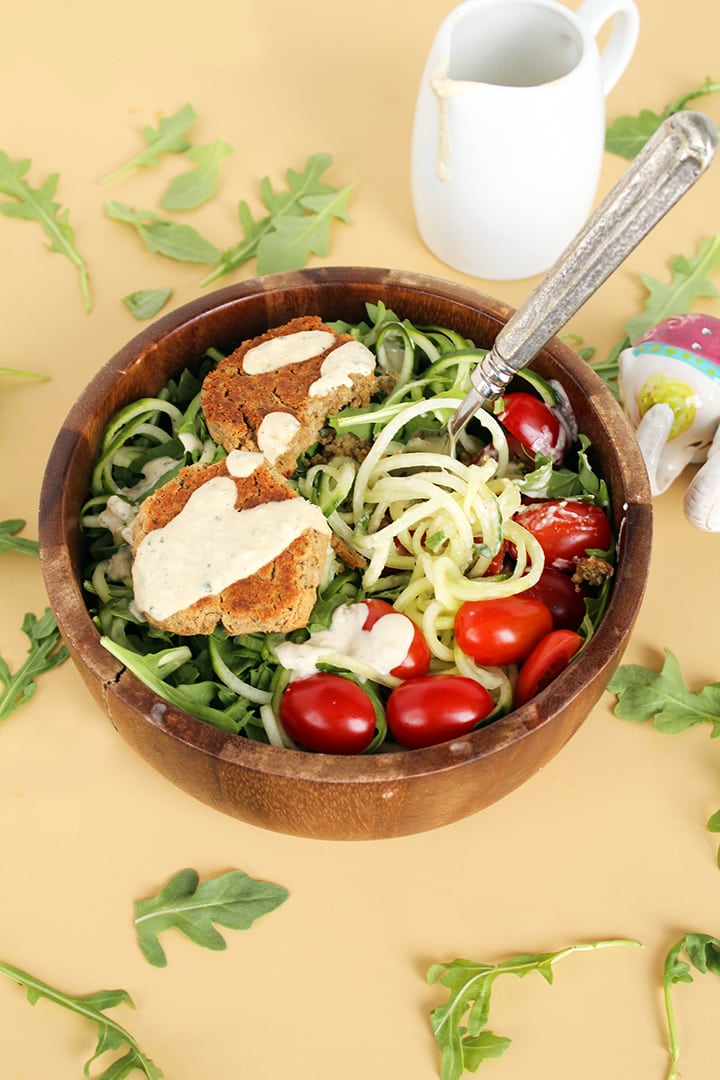 When I graduated college and moved in on my own, I discovered falafel. Being in my early 20s, I’d leave the bars late at night in the city and want something to nosh on – ideally healthy… but also filling and delightful.

I’d always get a falafel salad – with extra tzatziki sauce (skip the pita!) The next day, when I woke up, I wouldn’t feel gross (like you do when you eat two $1 slices of pizza – or three.) 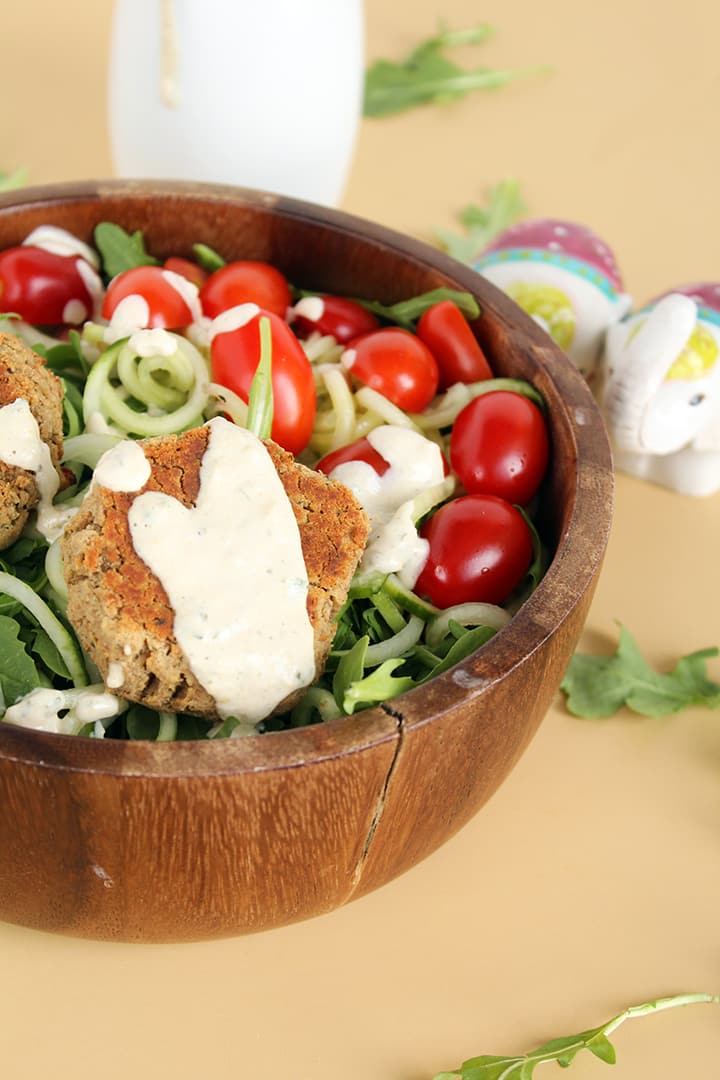 Falafel is wonderful – garbanzo beans are a gluten-free, vegan, lean protein source. I mean, who doesn’t love hummus (made of garbanzos) and veggies?

Oh and this sauce. I didn’t want to go with a traditional tzatziki/yogurt sauce that typically accompanies falafel, so I went back to the drawing board and thought back to those crazy NYC nights and remembered hummus… and then, tahini.

Tahini is made from ground sesame seeds. You can usually find it in hummus. It’s wonderful. 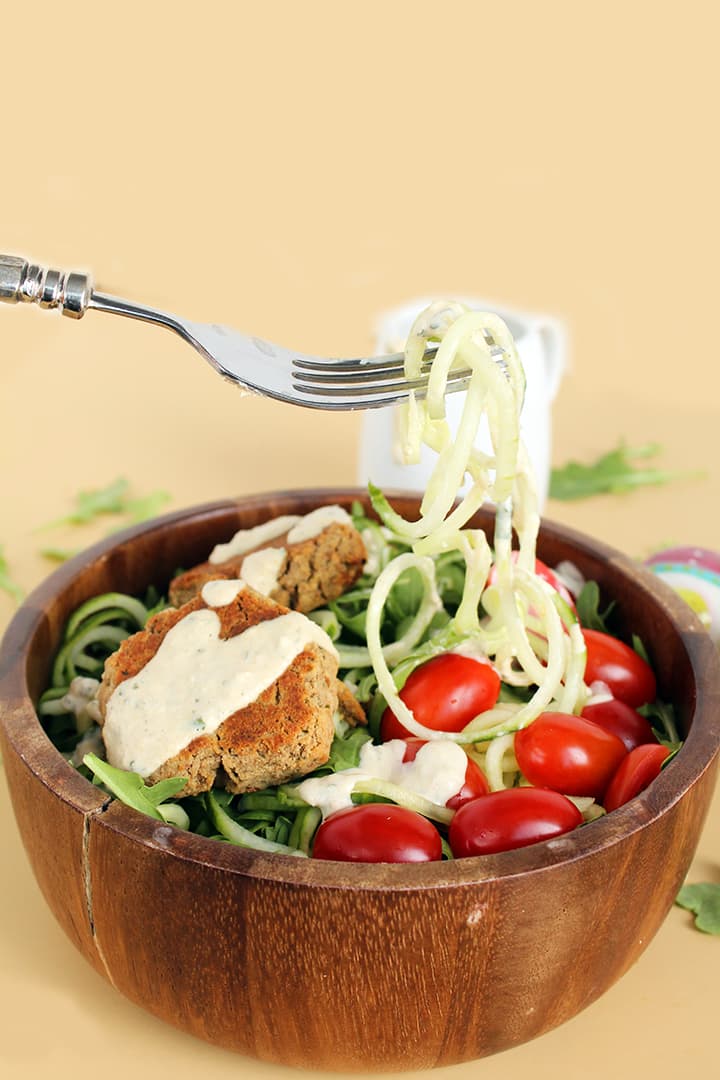 So instead of using yogurt, I started with tahini and added mint for some freshness, which pairs really perfectly with the cucumber noodles. 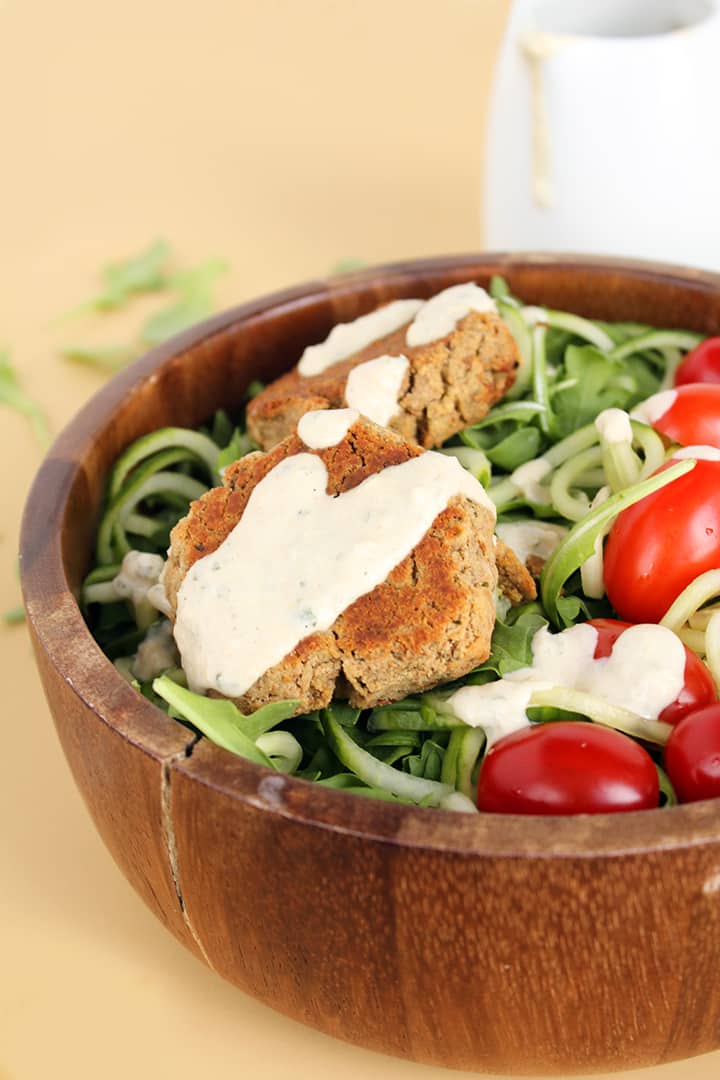 Plus – baked falafel has significantly less fat than fried falafel. Instead of frying these chickpea patties, we place them in a cast iron skillet coated with olive oil, which adds flavor, healthy fats and a pretty brown color as it bakes.

Needless to say, the falafel I was having in the city wasn’t baked. Definitely fried. So good. 🙂

What are your thoughts on falafel? 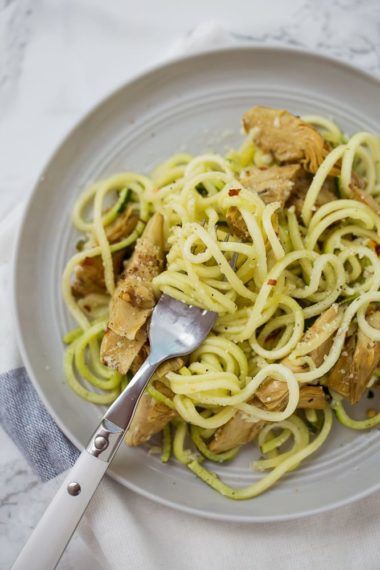 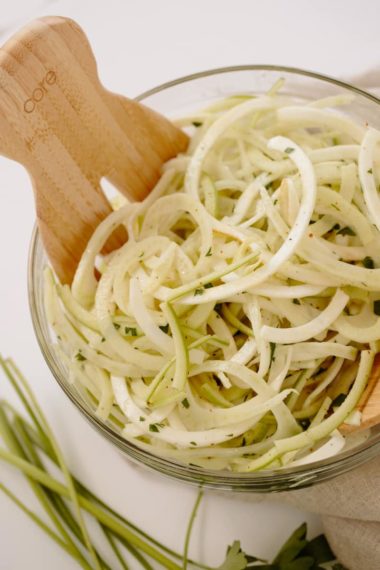 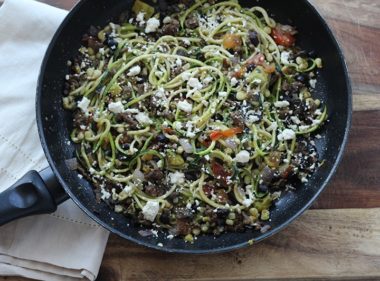 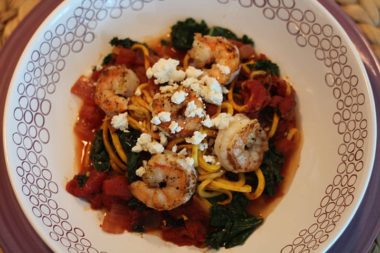 How I Weaned My Toddlers Off Breastfeeding

I'm a total emotional eater. 🤡🙋🏻when I'm feeling sad, mentally tired, or just 'off,' I eat. to me, food is therapeutic and cooking is cathartic. and while yes, I often reach for something chocolatey or a literal bag of bread 🍞, I usually want a long therapy session in the kitchen and since I don't bake, it usually ends up some sort of pasta, an epic sandwich, or like today, with this flavorful salad. 🥕⁣
⁣
I woke up in a little bit of a funk and I decided to make a fancy salad for lunch and this Roasted Carrot & Beet Farro Salad with goat cheese, pecans, cranberries, and frisee lettuce was born. 30 minutes later, I feel much better, and now I'm waiting to digest so I can hop on the @onepeloton, squeeze in a quick workout and end my day early to spend it prepping for Luca's birthday festivities tomorrow. 🎉 🎈 ⁣
⁣
speaking of - anyone have any tips for building a balloon garland??? 😅 ...

Open
want to know how to make pasta without boiling wat

want to know how to make pasta without boiling water? cook it in the oven! 👩🏻‍🍳⁣
⁣
continuing the #firstdayoffall festivities with the recipe for this NO-BOIL PUMPKIN & SAUSAGE BAKED ZITI 🎃 yes, you don't boil any water! 🙅🏻‍♀️ the pasta goes into the dish raw and it's baked in the oven until cooked. and if you don't eat meat, just omit the sausage! all the details are in the post, on the blog, now!⁣
⁣
have you tried this method yet? it's LIFE changing! 👏🏼⁣
⁣
#noboilpasta #pastabake #pumpkinrecipe #pumpkinrecipes #fallrecipes #easydinner #onepotmeal #onepotmeals #healthyrecipes #pastarecipes #pastarecipe #easymealideas #easydinners #easydinner ...

LOADED CAULIFLOWER SLABS 🥑🧀🥓 okayyyy I’m not saying these are meant to replace the loaded baked potato 🥔, but if you’re like me and just love getting creative in the kitchen with veggies, you’ll LOVE this spin! 🙌🏼 plus, it’s got the best part: the loaded fixings! bacon, avocado, and cheddar cheese 💁🏻‍♀️⁣
⁣
bonus: they’re cute to serve on game day 🏈 link in profile! ...

Open
every night, I have this ritual where I scroll thr

every night, I have this ritual where I scroll through the photos taken from the day on my phone and pick a favorite, posting it up on my stories with the hashtag #favoritepicoftheday. it’s a fun, sometimes therapeutic way to end and reflect on the day. as I was going through it tonight, the TV was on and I heard the news. ruth bader ginsburg passed away tonight. immediately, I felt sadness and a bit of worry. a worry of the implications politically of her passing. there’s so much at stake in this upcoming election and you all know I don’t get political on here very often, but seeing roma’s little smiley, silly face made me realize that if I’m not being a good role model and using this platform to make the world a better place for her, what kind of mother am I? so VOTE, VOTE, VOTE. 🇺🇸 and as the late RBG said, “real change, enduring change, happens one step at a time.” here’s my step. 💕 #rbg #ruthbaderginsburg ...