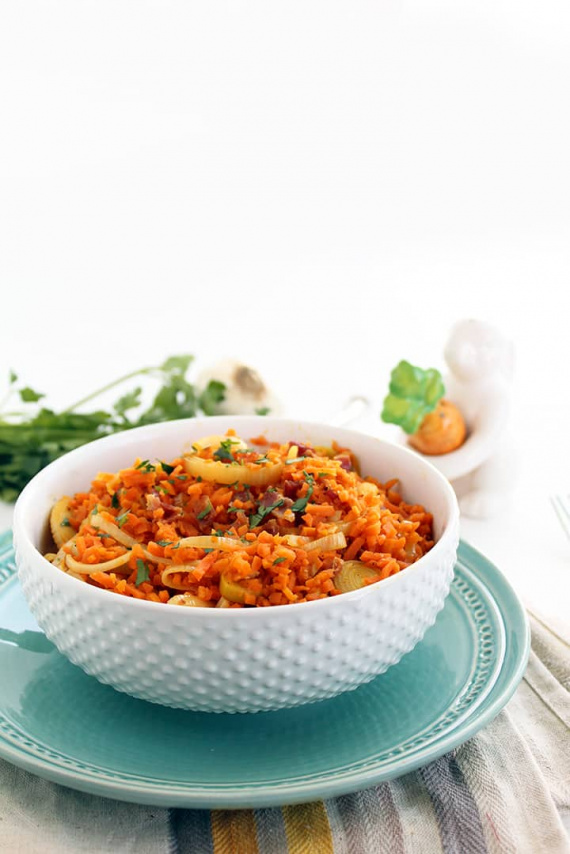 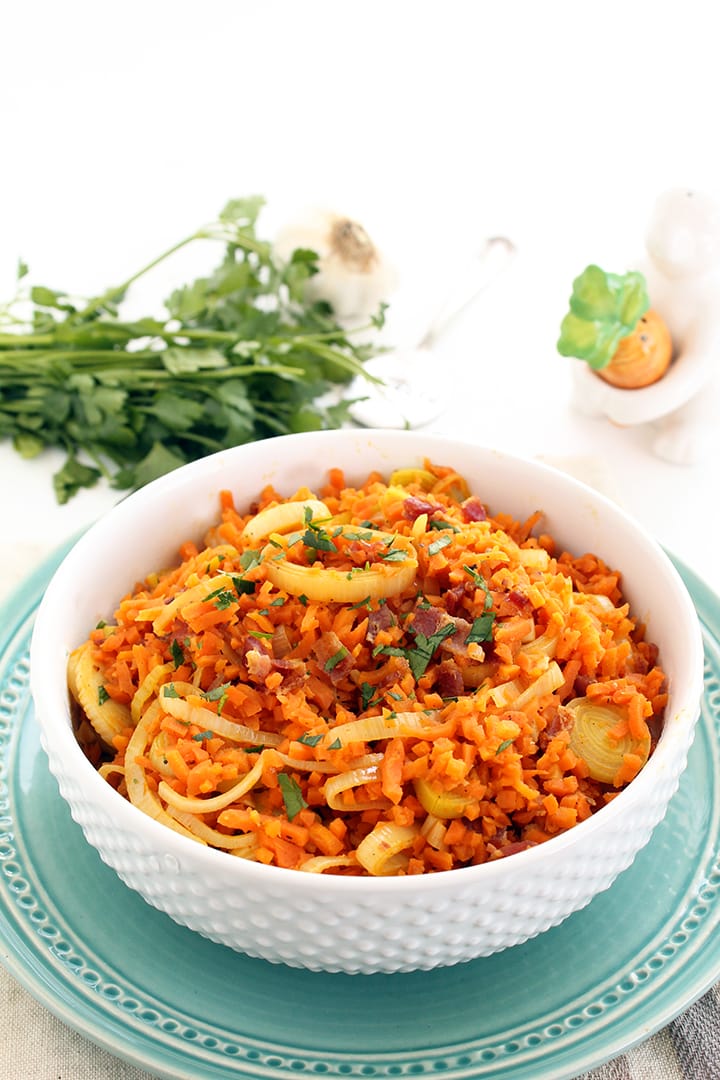 Last week, Gina from SkinnyTaste.com was kind enough to let me hog her blog for the day and post up a recipe.

What did I choose? A true “bang for your buck” kinda meal. This risotto made of carrot rice has so much flavor (thanks to the leeks and bacon) that you truly won’t realize that you’re eating one of the most mundane vegetables out there: carrots. 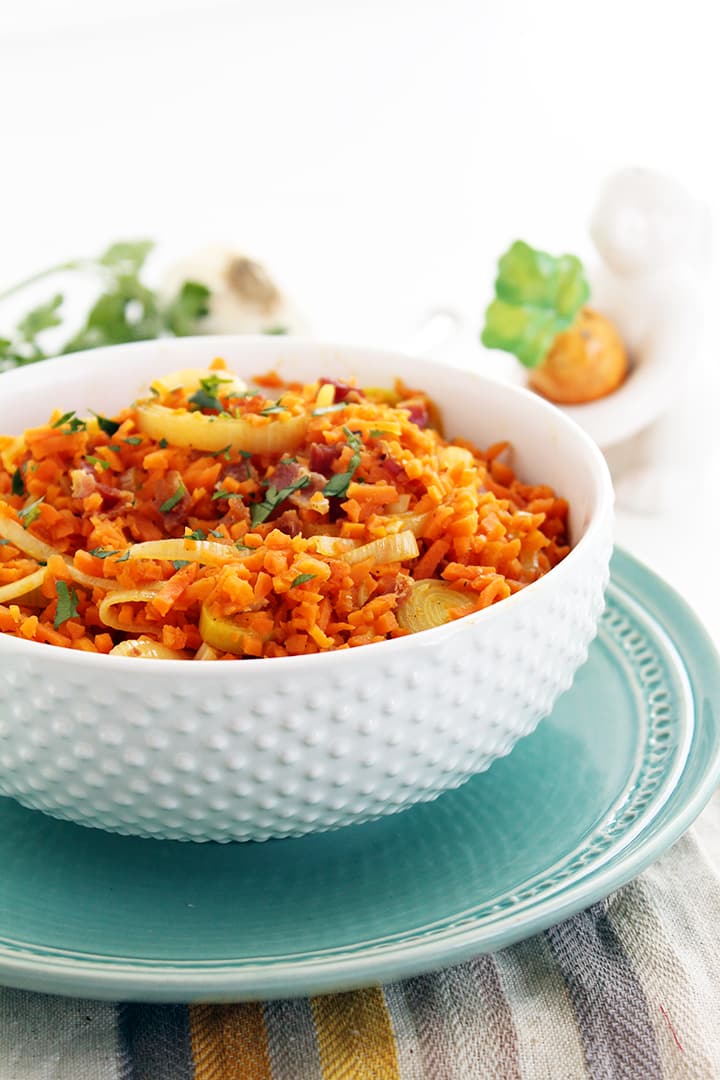 I don’t mean to bash carrots – I eat them a lot! I love dipping carrots in guacamole and hummus. Actually, Dos Caminos (a Mexican chain restaurant) offers crunchy veggies instead of chips with their guacamole, which I really dig. It’s tough to pass up chips and guac.

Otherwise, carrots are kind of a second thought – chopped in a stew, sliced over a salad or floating as cubes in a soup. 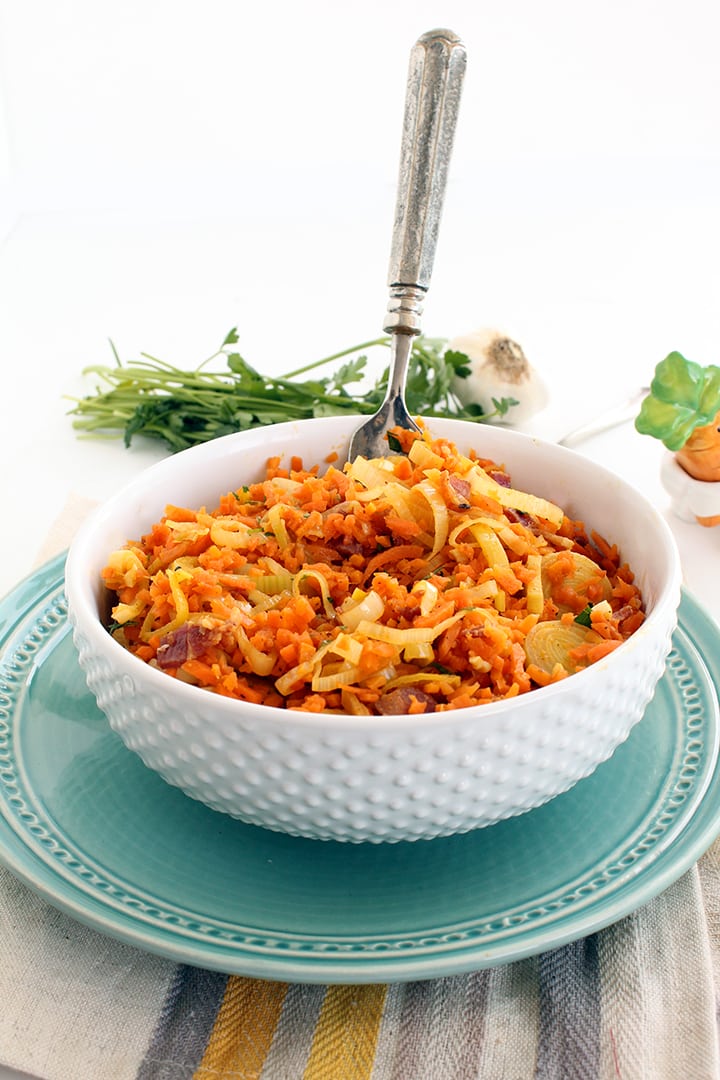 But, I think carrots are going to make a comeback. It’s too bad that carrots are in their prime season during late summer and early fall. Luckily, carrots are such a staple veggie that they’re available year-round at farmer’s markets!

I love what Marc Forgione does with his carrots at his steakhouses (American Cut) – they’re giant and baked for a while so that your knife slices through it like butter – soft and almost creamy. Such a decadent way to enjoy a carrot. 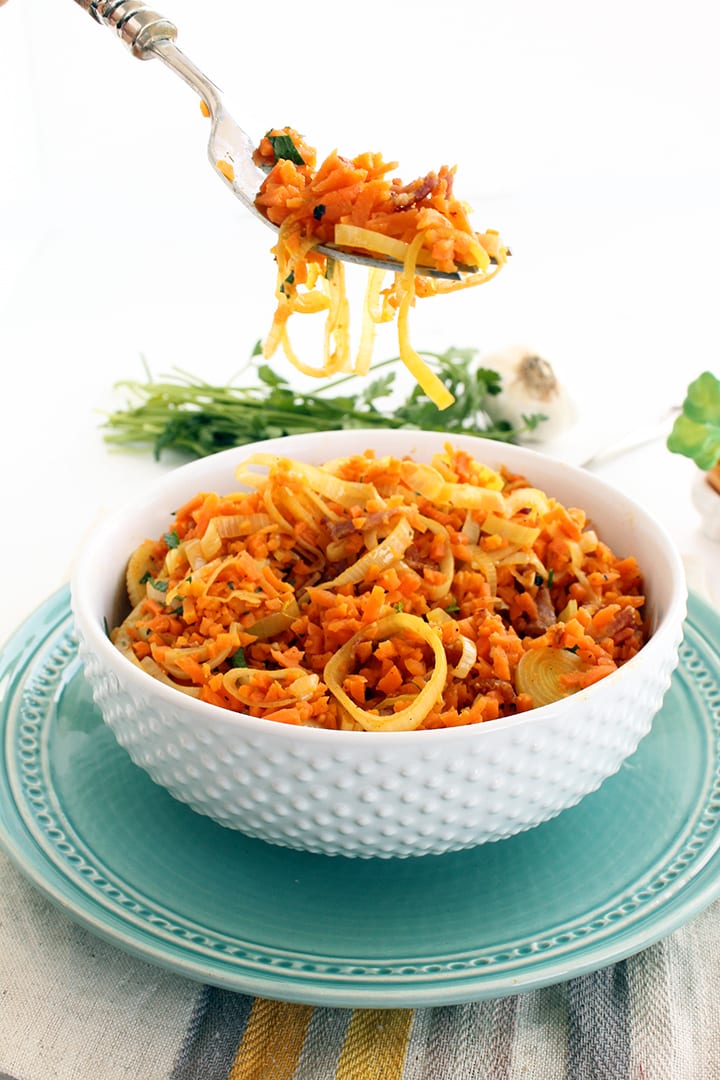 This carrot rice is spring-friendly with the fresh leeks and hearty with the bacon. The bacon allows us not to have to use added oil – the fats from the bacon are enough to cook the rice with.

Side note: lately, I’ve been going light on the olive oil and preferring vegetable or chicken broth instead. It saves some calories and feels better on the tummy (I get an upset stomach from eating too much oil!) 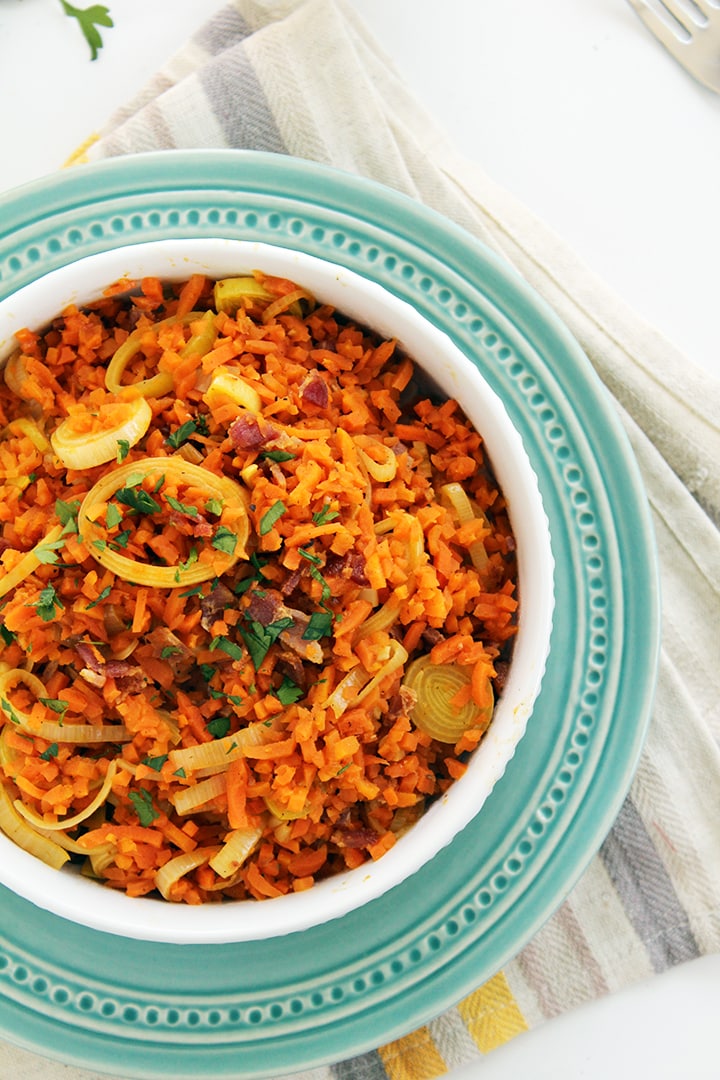 I enjoyed this as leftovers, too! It keeps its flavor and doesn’t get soggy. I actually tried some with breakfast (alongside some eggs) and I was in heaven. Veggies for breakfast? That’s kinda my jam.

You can find this recipe over at SkinnyTaste.com! 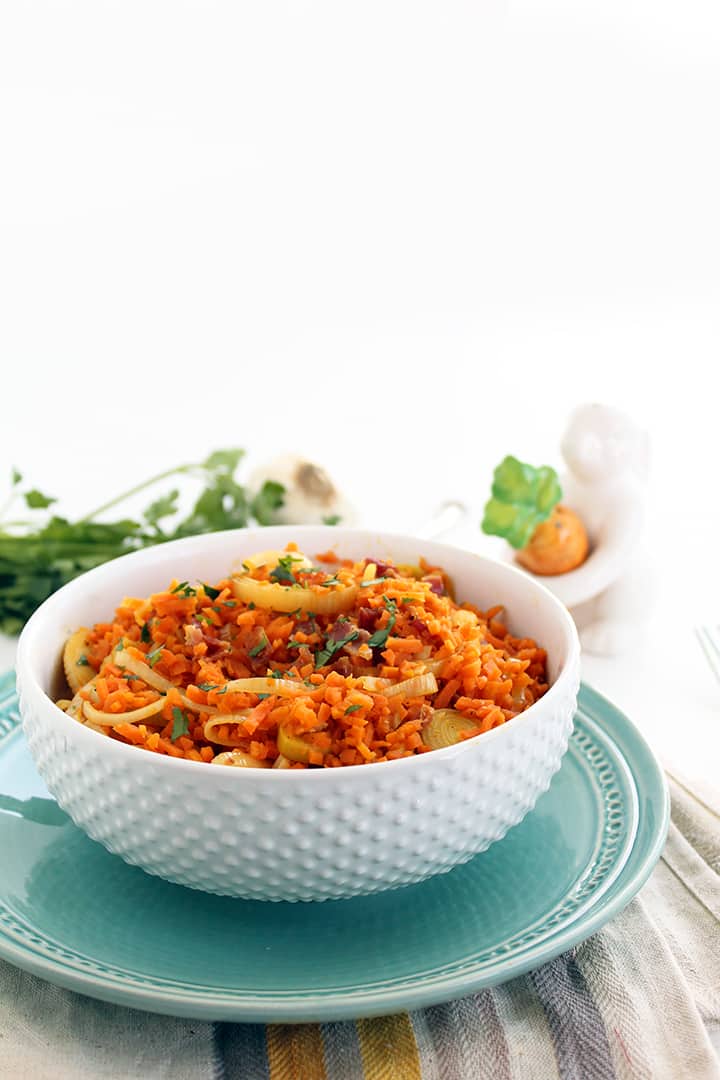 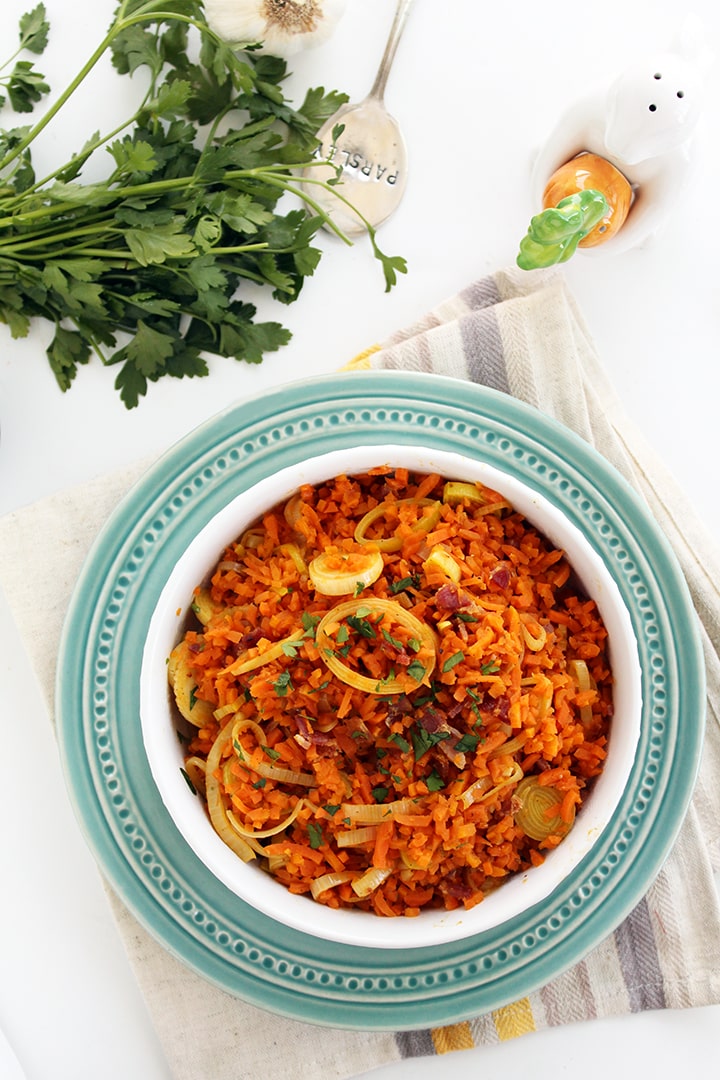 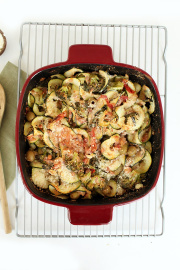