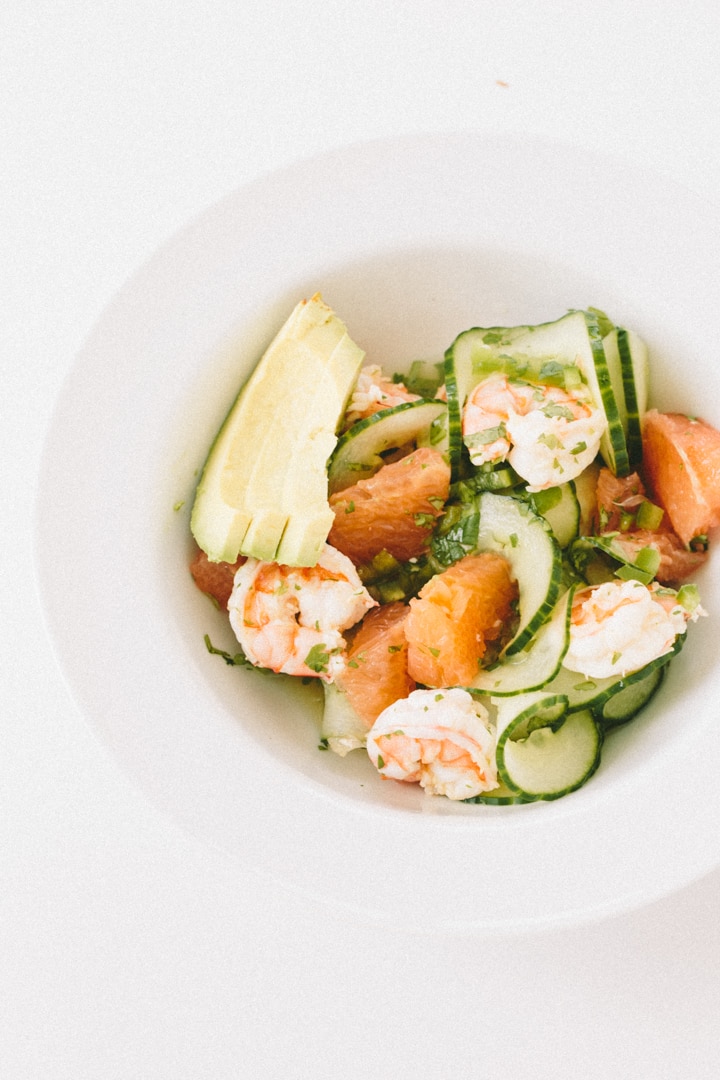 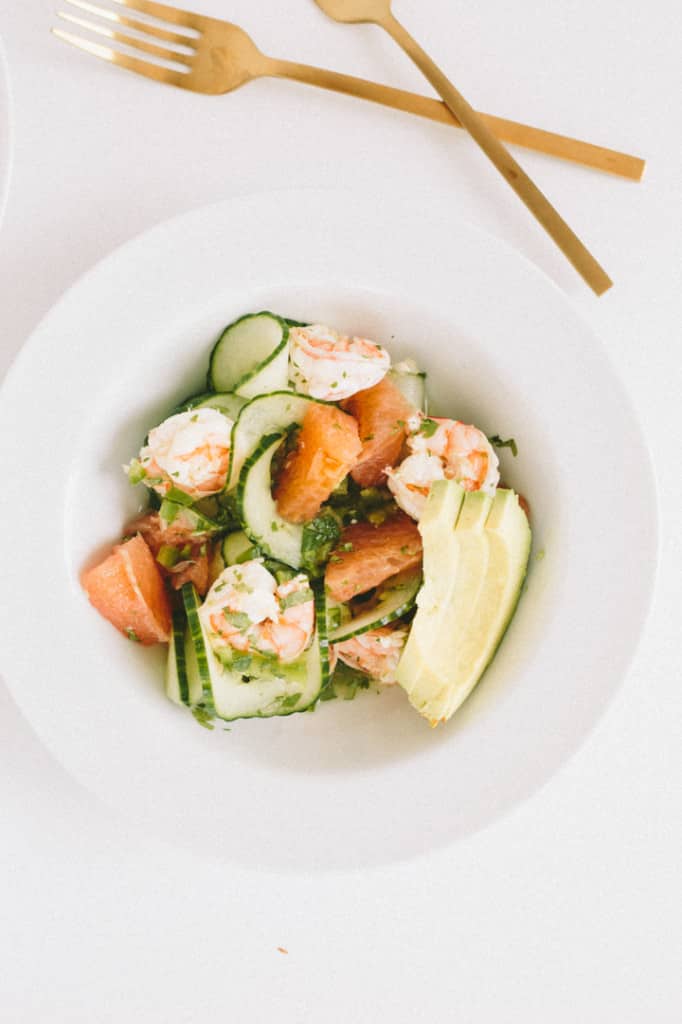 How exciting was that game last night? I couldn’t be prouder of our ladies! Gosh, I remember how it used to feel to win one simple in-season game of lacrosse in high school, I can’t even imagine how incredible it must feel to win The World Cup.

I should probably be sharing an American-themed recipe today to celebrate, but, due to poor planning, we’re going Mexican. 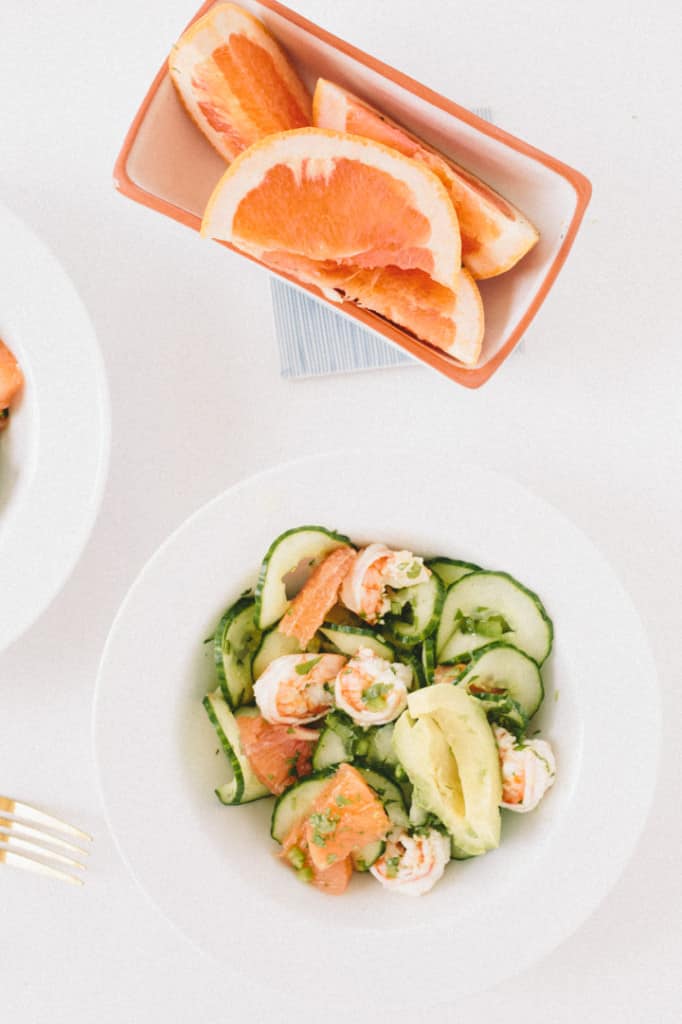 Here’s the story behind this recipe: I tested the recipe as a ceviche (raw fish cured in citrus juices), but when I went to make it and photograph it, I didn’t plan well and thus, had to boil the shrimp to save on time.

Thus, the photographed recipe uses boiled shrimp. In case you don’t have the time to cure the fish in juice either, I’ve given you the recipe with boiled shrimp. If you’d like to make a tradition ceviche, just add the shrimp to a medium-sized bowl and add in enough lime juice to cover the shrimp. Let that sit in the refrigerator for about 4 hours or until the shrimp are opaque (I started checking after 3 hours.) It’s time consuming, but worth it – if you have the time. 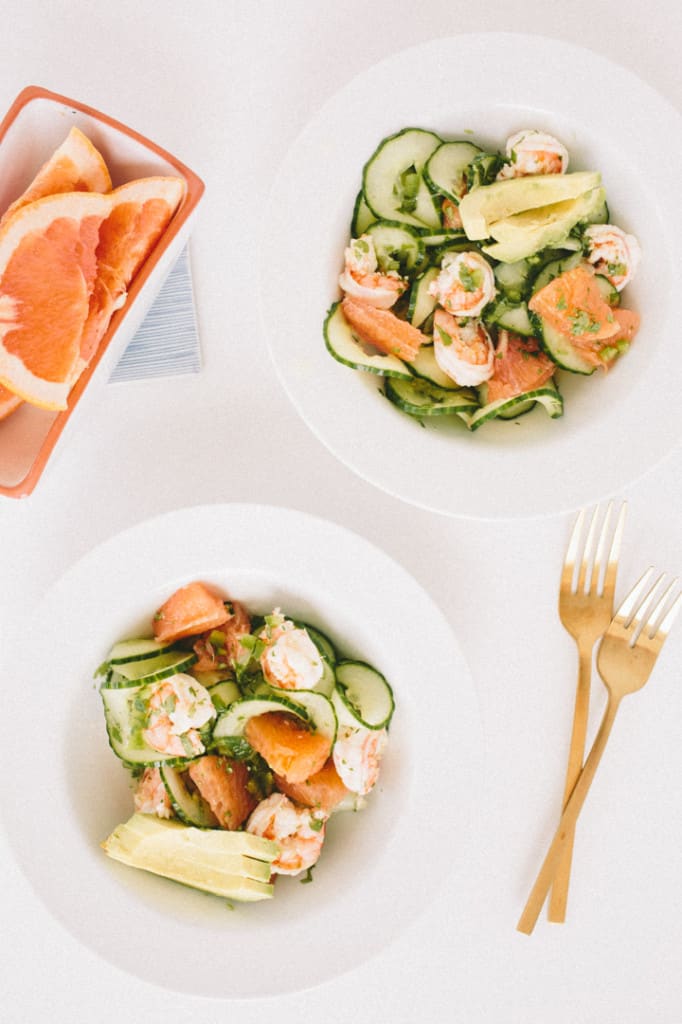 Both are delicious. Both are easy to make.

The inspiration from this recipe comes from something Lu and I ordered almost every day on our honeymoon when we were at the hotel. This was their “Citrus Ceviche” which had thinly sliced cucumbers, grapefruit slices, shrimp, octopus and cilantro.

Of course, their version was much more enjoyable, since you’re lying on a beach chair with sandy feet and sun-kissed cheeks, but heck, life’s back to normal and I’m bringing this dish to you all! Using spiralized cucumbers makes this dish heartier and gives the dressing something to cling to, so you’re not left with a bowl of juice and nothing to “dunk” it in. I love the flavors of this dressing – the pineapple juice gives it that Caribbean flavor and adds the perfect amount of sweetness. 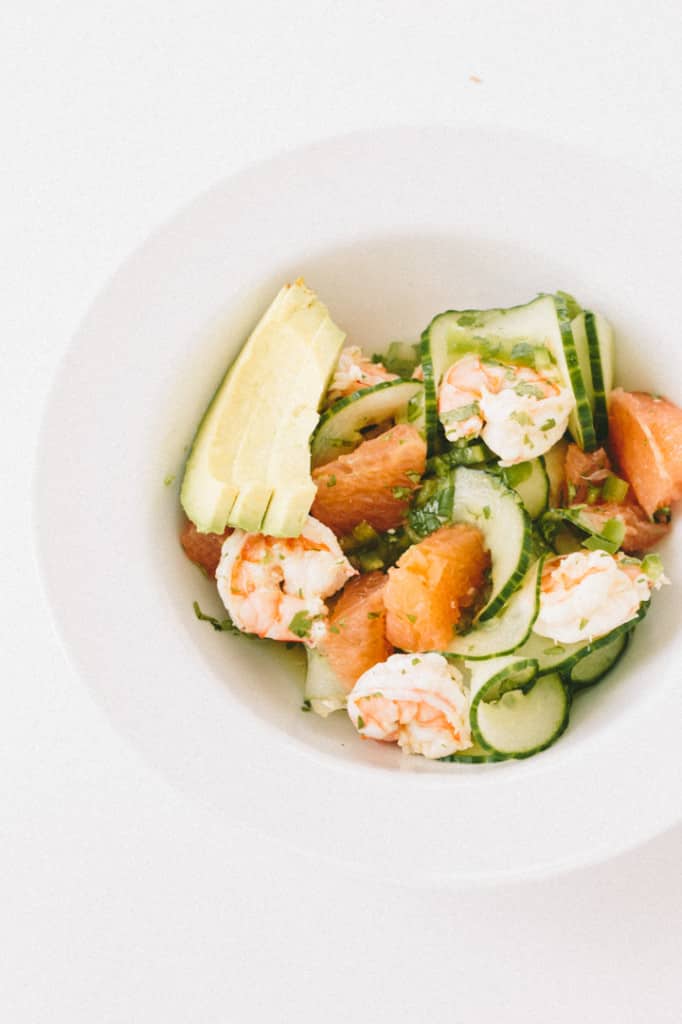 This is best served alongside guac and chips of course, but if you’re trying to be a bit more bikini friendly, opt for celery sticks and guac! It’s all about compromise, without giving up what you love most. Oh, and I didn’t skimp on the chips on the honeymoon 😉

Speaking of, the honeymoon was hands-down the most romantic and meaningful vacation I’ve ever been on. I really did feel special, like I was starting a life together with the man of my dreams, the future father of my children. It’s a hard feeling to explain, but every step we took together felt exciting – like life just began. 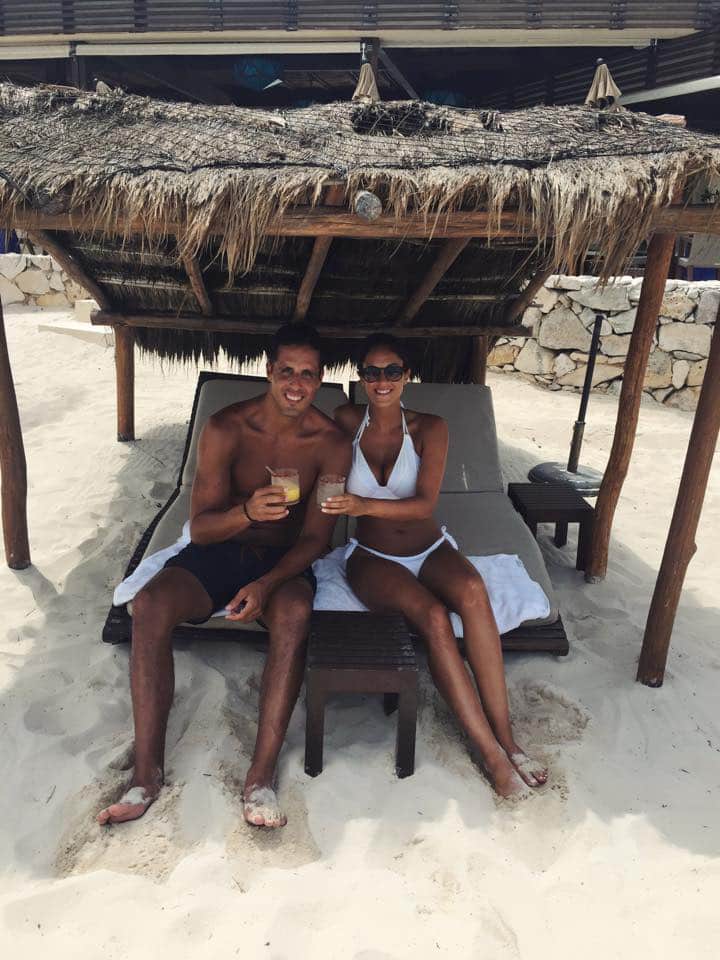 I’ll save the corniness and do a mini-recap instead. We stayed at The Viceroy Riviera Maya in Mexico, which was about a 45 minute trip from Cancun Airport. Now, you may be thinking “wow, that’s a swanky, expensive hotel.”

Well, here’s our little secret: we booked our honeymoon on Cyber Monday and got 40% off each night. 40% off. So, we stayed at this luxurious and plush resort for almost half the price. We’ll definitely be booking future vacations on Cyber Mondays moving forward. 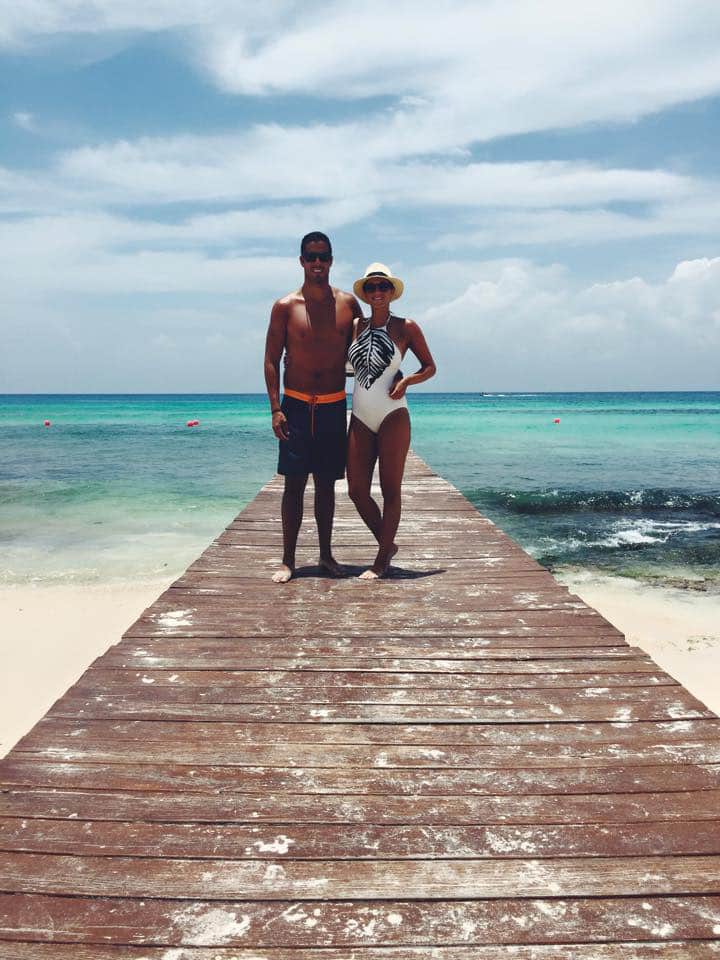 Not only were the grounds incredible (you felt like you were walking through a Mayan jungle every time you went somewhere), the service was impeccable. Everyone went above and beyond for us and made our “luna de miel” the most special trip of our lives. From making sure we had the best cabana on the beach to bringing almond milk onto the premises for us, they were there. 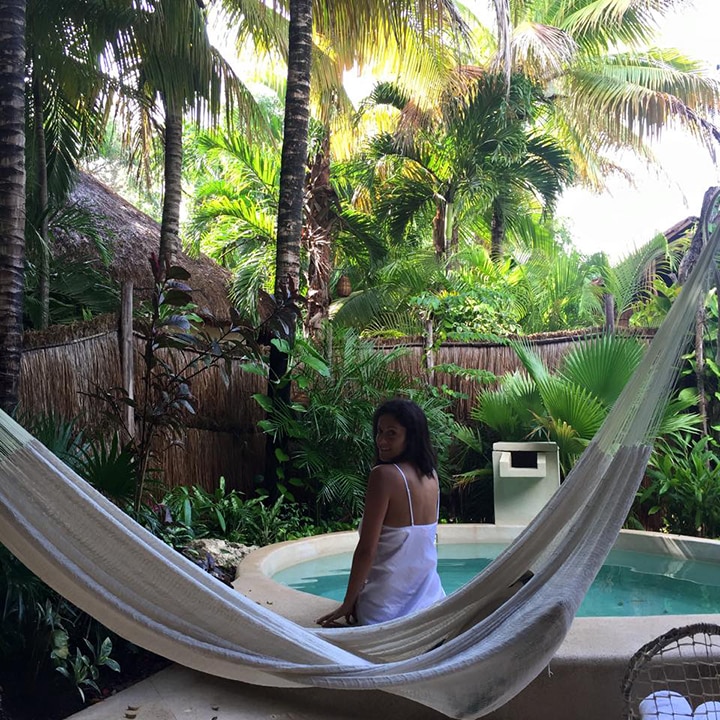 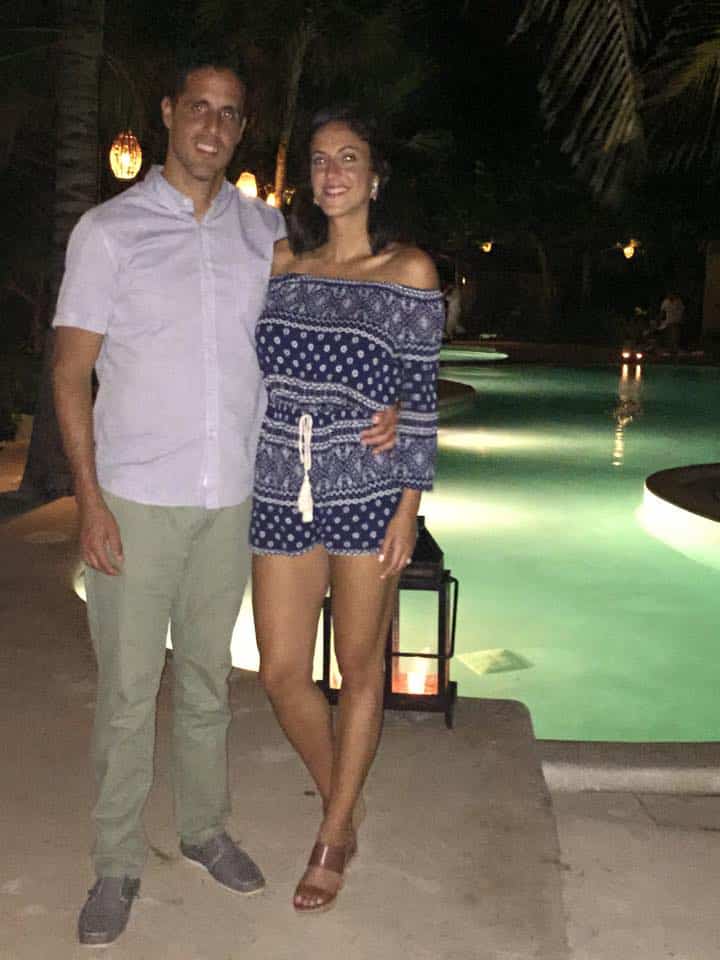 The food was the second best part – every meal we had was delicious, fresh and surprising. Even the chorizo bread basket was undeniable! My favorites were the Valencian paella, the tuna tartar stuffed chile peppers and the pork carnitas on “Mexican street food night.”

Every day, we woke up, ordered coffee (and/or breakfast) to the room and laid outside by our plunge pool, put on some Xavier Rudd, read our books or played rummy 500. 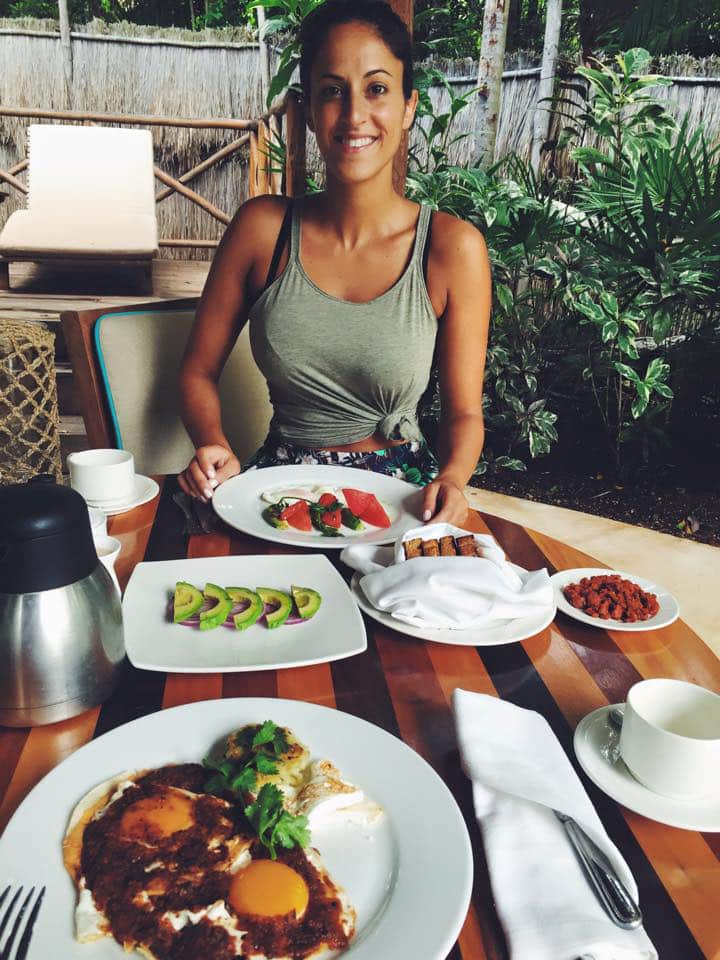 A few days we took day trips or went out for dinners. We saw the ruins at Tulum and Chichen Itza, which were incredible. 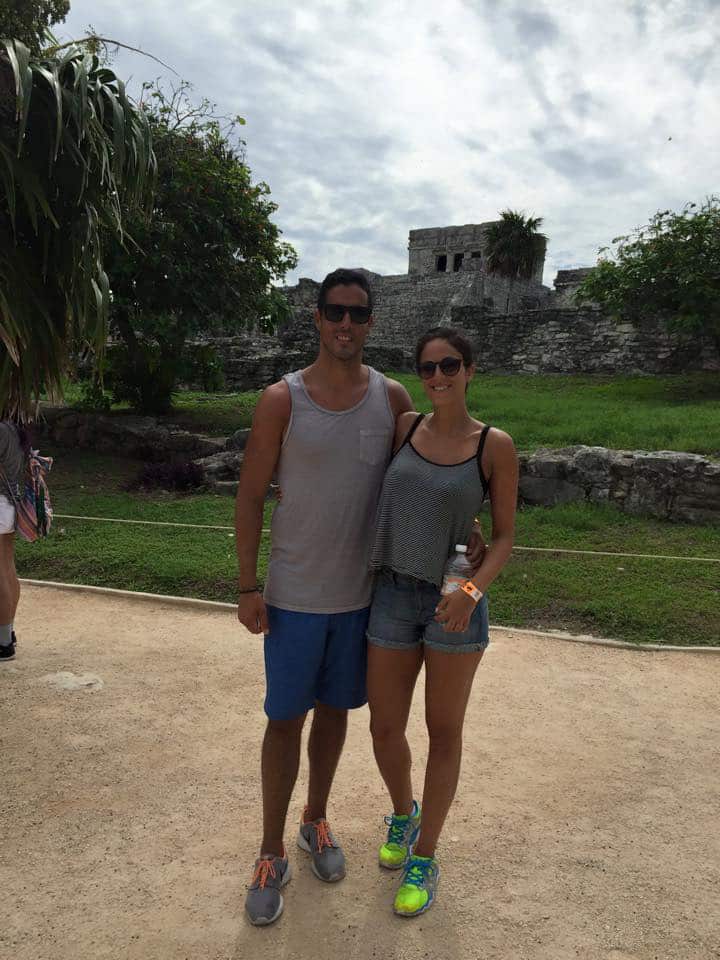 We went jumping and snorkeling in cenotes, saw a Cirque du Soleil show (called Joya) and spent a couple nights in Playa del Carmen, walking in and out of shops and stopping at a couple places for a glass of wine before settling into a restaurant for dinner.

The rest of the time we jumped in the ocean, paddleboarded, got massages and just relaxed by the pool or beach. One day, I even painted on the beach! 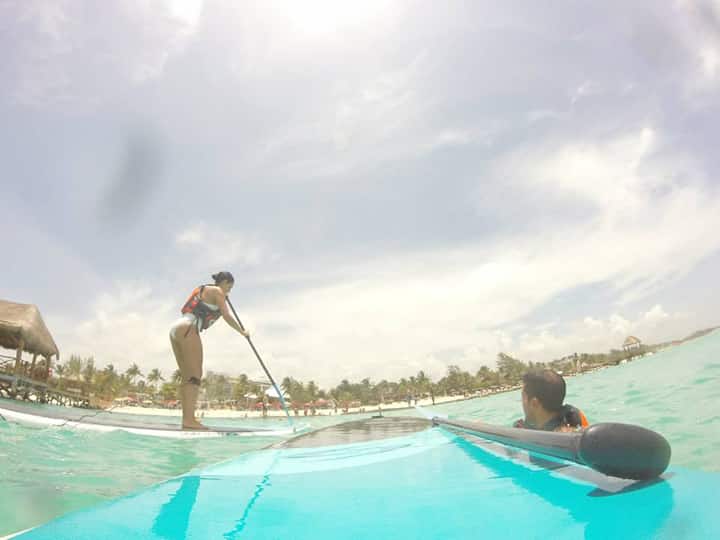 I miss it every day. I mean, how can you not miss drinking out of a coconut, on the beach?

However, I have to say – I’m excited to be back in the kitchen, spiralizing. 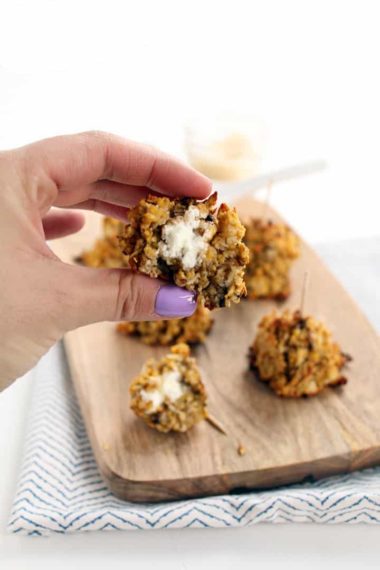 Scenes from my grandparent’s table 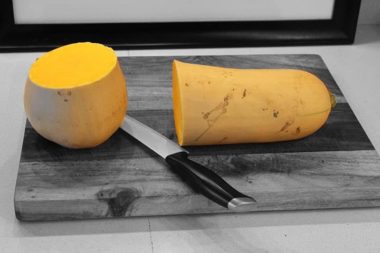 How to Spiralize a Butternut Squash

Carly says:
July 6, 2015 at 9:35 am
I really don't know how you could be excited to be back in the kitchen spiralizing after all of that! What a perfectly blissful honeymoon in paradise! I guess you have to come back to Earth sometime, but why? But the recipe does look phenomenal - juicy, fresh and tropical!
Reply
Shelbi says:
July 6, 2015 at 9:39 am
Your vacation looked absolutely stunning! And despite it being summer here the weather has certainly left a lot to be desired so you cut out at the right time! Do you think you could use grapefruit juice in lieu of the orange juice to enforce the grapefruit flavor, or would it lack sweetness that the orange juice has more of? I prefer grapefruits over oranges for whatever reason so I was considering going that route. This months Food Network magazine had an insert on 50 zucchini recipes and I can't wait to turn many of them into spiralized recipes :-)
Reply
Anonymous says:
July 6, 2015 at 12:23 pm
Wow! I may have to buy that issue of the magazine. I bet Ali will appreciate it, too. My zucchini are growing like weeds! I should have some fresh ones from my garden, soon. Thanks for posting, and letting us know that.
Reply
Shelbi says:
July 6, 2015 at 4:27 pm
No problem :-)
Amber says:
July 6, 2015 at 9:46 am
Welcome back! Your honeymoon looks amazing and so do you! Definitely good inspiration for this post-holiday Monday morning.
Reply
[email protected] says:
July 6, 2015 at 10:09 am
Ali, your honeymoon looks like a dream! There is nothing I find more relaxing than spending time with the sun and sand. This dish looks like the perfect way to relive it too.
Reply
Erin @ Her Heartland Soul says:
July 6, 2015 at 10:13 am
What an awesome honeymoon!! Your resort sounds fabulous! My husband and I went to Puerto Vallarta this year and had the best time! We definitely want to go back!
Reply
jan says:
July 6, 2015 at 12:19 pm
My husband can't have grapefruit ok to substitute oranges instead?
Reply
Ali Maffucci says:
July 6, 2015 at 1:50 pm
Yes, of course!
Reply
jan says:
July 6, 2015 at 2:16 pm
Thanks. The recipe sounds delicious and your pictures beautiful!!
Elise Holland says:
July 6, 2015 at 1:53 pm
Gorgeous honeymoon photos! Thanks for sharing! This recipe looks amazing too! I actually created something similar here - http://www.ambitiouslyhealthy.com/2015/04/spirlaized-cucumber-and-grilled-shrimp.html
Reply
Terri says:
July 8, 2015 at 1:19 pm
So, poor planning means Mexican? I know you did not mean to say that, but with Mr. Trump remarks against Mexicans, it just hit me hard
Reply
Ali Maffucci says:
July 8, 2015 at 3:38 pm
I meant I should have shared something BBQ/American, to honor the US Women's National Team winning the World Cup!
Reply
Kim Bartram says:
July 9, 2015 at 1:16 pm
As always the recipe looks delish - your photos are breathtaking and I couldn't agree more, I would want to be back there too on the beach. I do have a question about Cyber Monday, did you go to the resort site specifically or somewhere else? Because, you totally have me wanting to book a vacation on Cyber Monday.
Reply
Judith says:
July 9, 2015 at 7:20 pm
Best of Luck for both of you in your married life. Everything looks just wonderful, especially both of you!
Reply
Barb says:
July 21, 2015 at 5:06 pm
Hey there- Congrats on your published book, and wedding! this recipe looked so amazing. I made it tonight and it is so good. I didn't have grapefruit, but subbed an extra orange, or a pepper so added a bit of flakes, OMG! It is to die for. I live in Palm Beach, FL and this is a TRUE Floridian tasting recipe! Can't wait to share with my book club tonight!!
Reply
Pingback: Teriyaki Pineapple Shrimp with Bell Pepper Noodles | Inspiralized
Pingback: Eat the Seasons | July - Designs of Any Kind
Jill Roberts says:
August 2, 2017 at 7:25 am
This citrus shrimp ceviche with spiralized cucumbers a honeymoon recap looks yummy and healthy. I found your post from Pinterest! I'm also gonna pin this post on my Pinterest board my followers will love it. Thanks for sharing!
Reply
Zach Davis says:
May 1, 2018 at 3:55 pm
This citrus shrimp ceviche with spiralized cucumbers recipe looks so amazing and yummy at the same time. Found your post so easy to follow along when preparing them yesterday. So mesmerized by this. Thanks for sharing!
Reply
Carly Glazer says:
May 2, 2018 at 11:30 am
Hi Zach! Glad you enjoyed! Let us know what you try next!
Reply
Yashar says:
May 28, 2018 at 4:32 pm
Just ran out of cilantro :( I will have to try this next time I go to the grocery store.. looks heavenly!
Reply
Julia Stearns @ Healthirony says:
March 13, 2019 at 5:59 am
I'm ashamed to say that I've never had citrus shrimp ceviche! This recipe looks great though so hopefully that will change! Thanks for posting it!
Reply
Carly Glazer says:
March 21, 2019 at 4:40 pm
Let us know if you give it a try!
Reply

A letter to my daughter on her first birthday