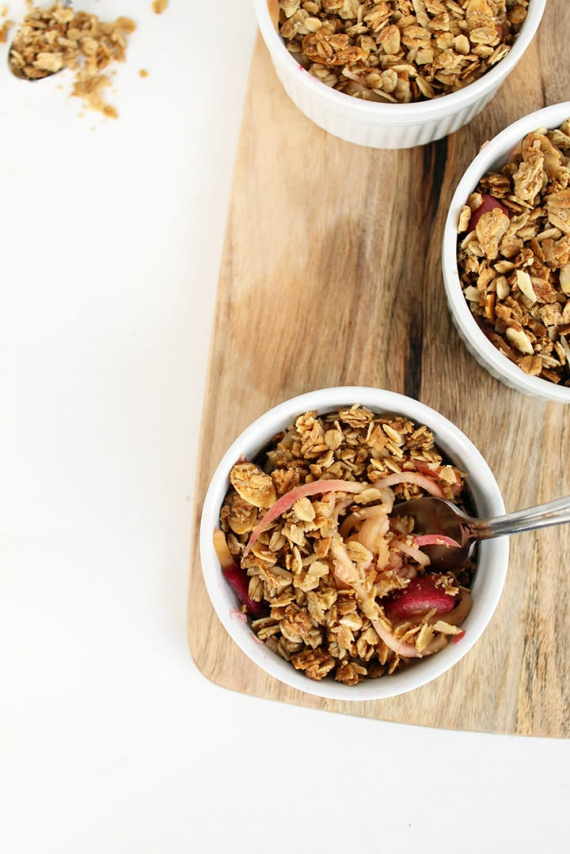 Recipe by Vegetables, Gluten Free, Vegan, Vegetarian, Dessert, Apple
After seeing an uncanny amount of rhubarb recipes, I decided to order and try some...
jump to recipe
share this recipe

After seeing an uncanny amount of rhubarb recipes, I decided to order and try some rhubarb. Yes, up until a few days ago, I had never tried rhubarb.

What’s rhubarb like? It’s tart and savory. Paired with a sweet apple, you’d never imagine something so simple looking (a stalk) could taste so good. 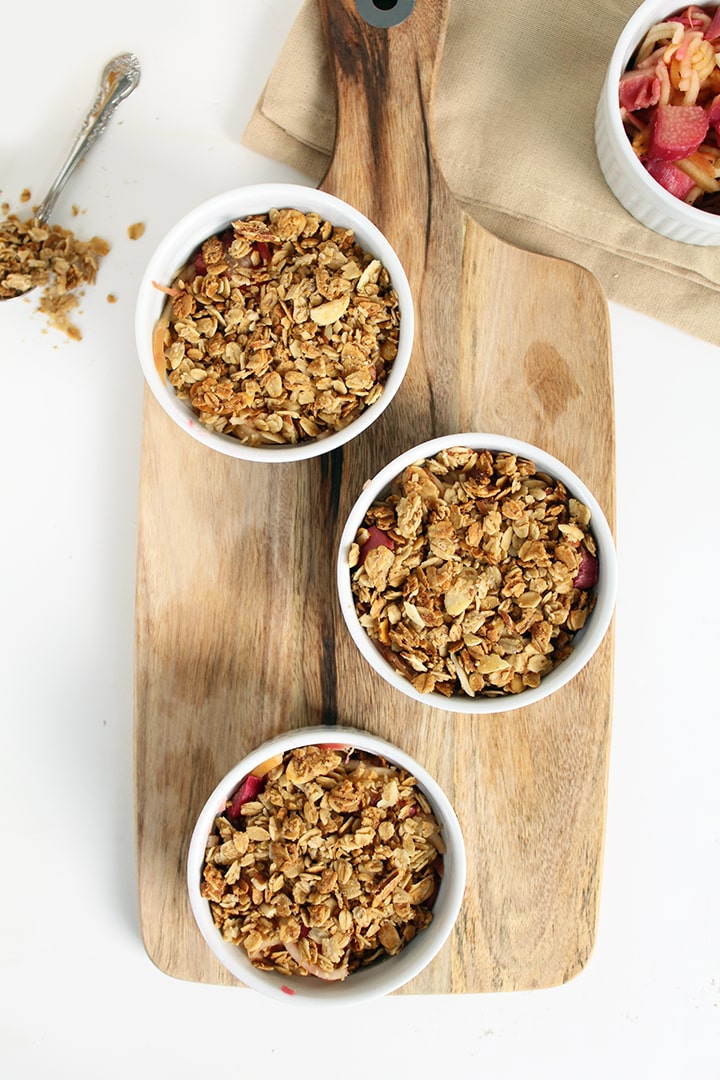 Aside from incorporating one of springtime’s most popular ingredients, I’ve made an apple crisp that’s so ridiculously easy to make, you’ll be making it for dessert on a whim for the rest of spring.

Apples are probably tied with zucchini for “easiest vegetable to spiralize.” You literally just load them on the spiralizer – no prep required. Have you seen this video?

Just remember to take off the sticker (if you’re buying a grocery store that labels their produce) – I made that mistake and was really confused when I was chewing on adhesive.

I love these crisps because they apple and rhubarb do all of the work. As they roast slowly, they soften and their juices release and sweeten the crisp. 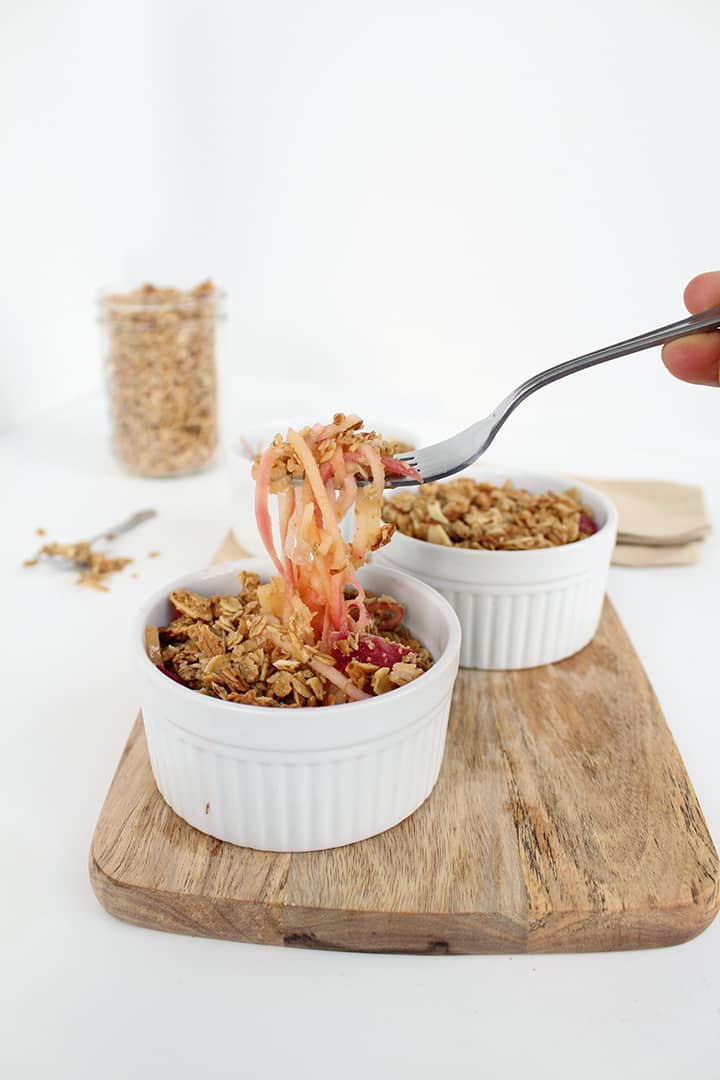 There are so many yummy and healthy granolas out there, so pick your favorite and sprinkle it on top of the apples and rhubarb at the end, roast for another 5 minutes and voila – a gourmet crisp, using only four ingredients (granola, apples, rhubarb and honey)!

I chose  Udi’s Gluten Free Vanilla Granola, which I had never tried before and it worked so well – vanilla with the apple and rhubarb is the perfect amount of sweet. 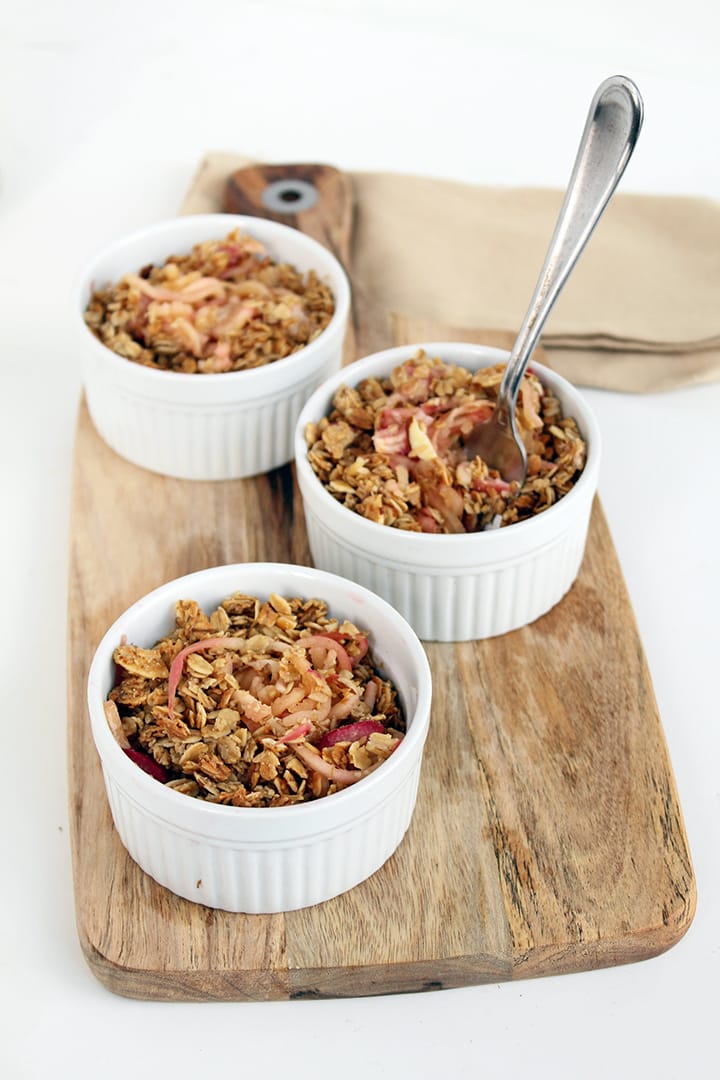 The granola heats up in those five minutes and completes the crisp. Instead of mixing flour with sugar and oats, choose a healthy granola (with recognizable ingredients!) and use that instead.

These crisps are perfect for a spring picnic or just a night in to treat yourself. And who doesn’t love a treat?

Have you tried rhubarb? What do you think? 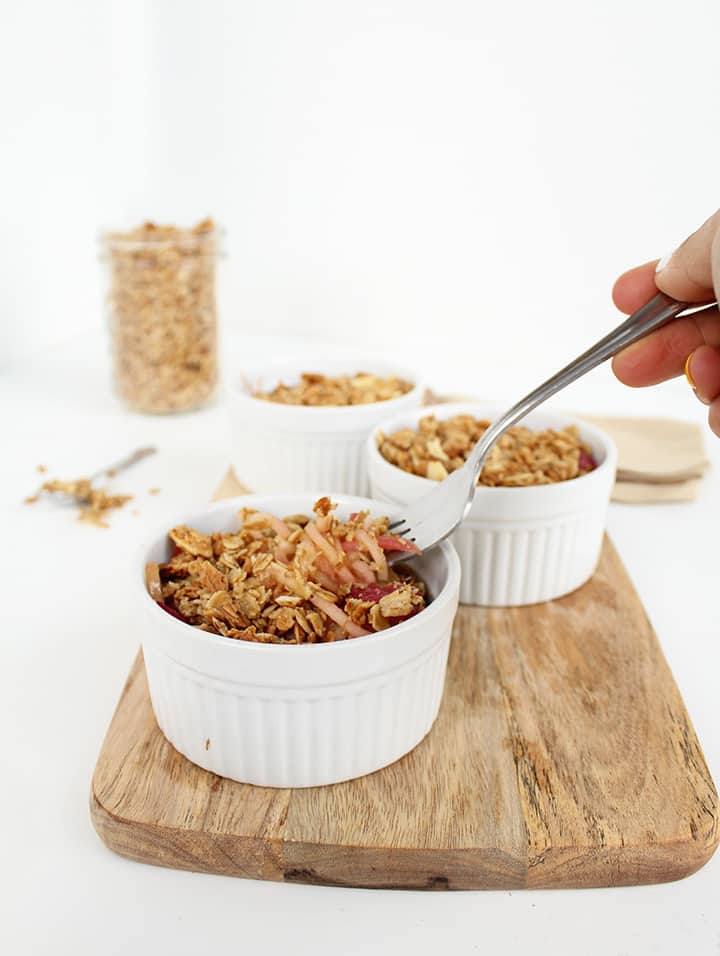 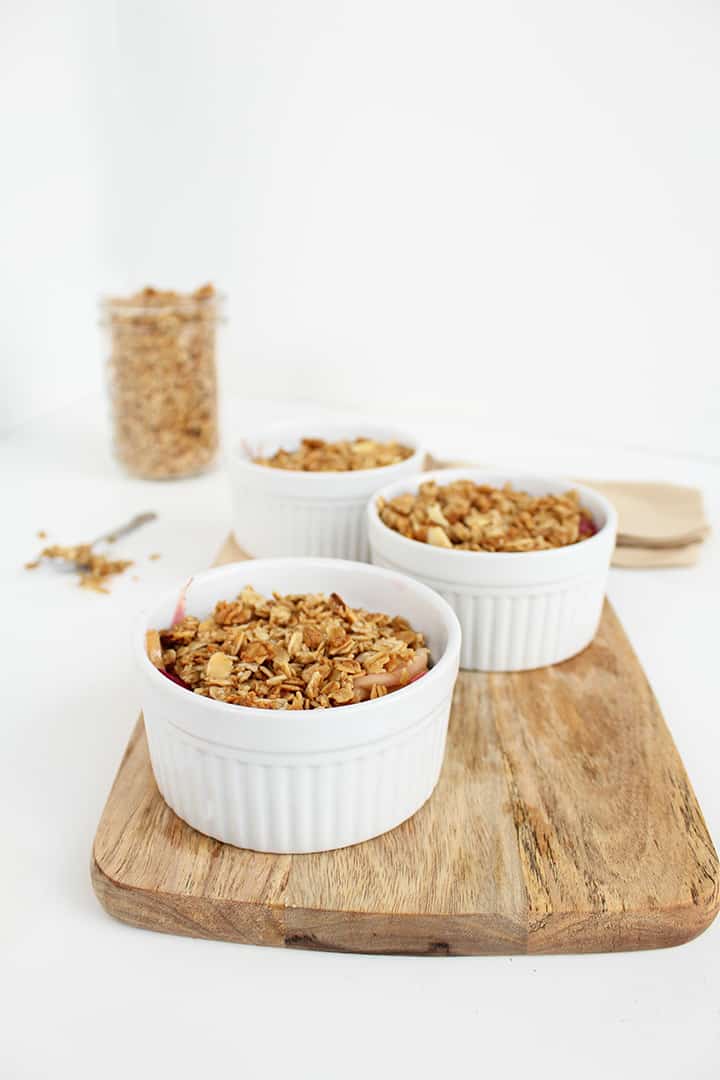 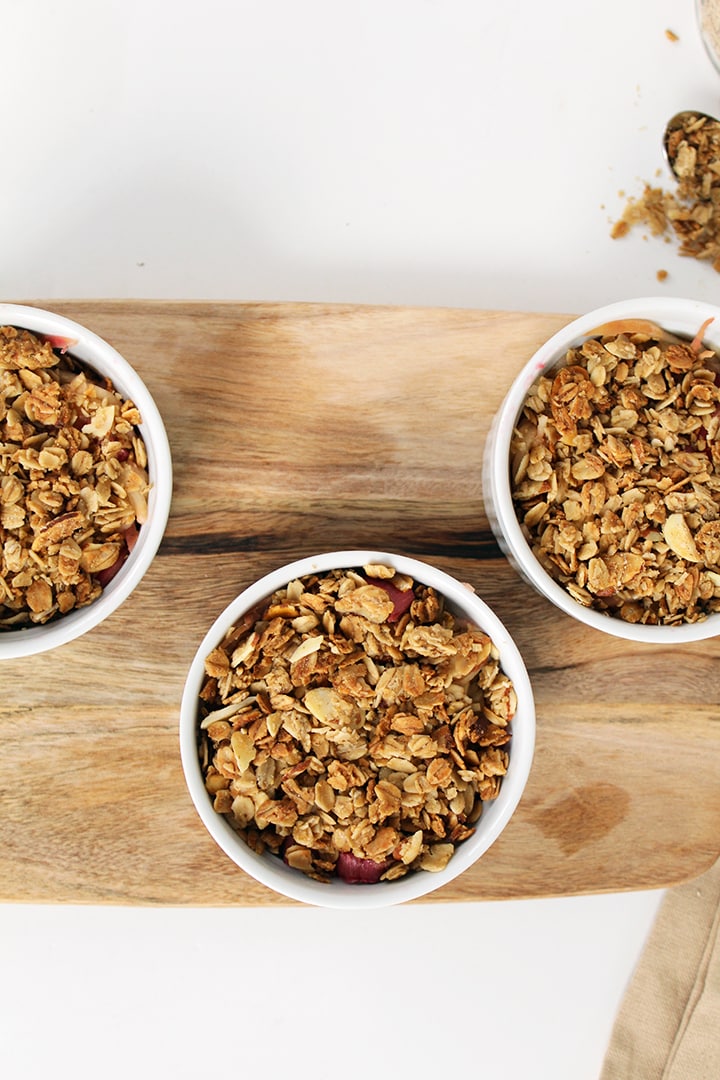 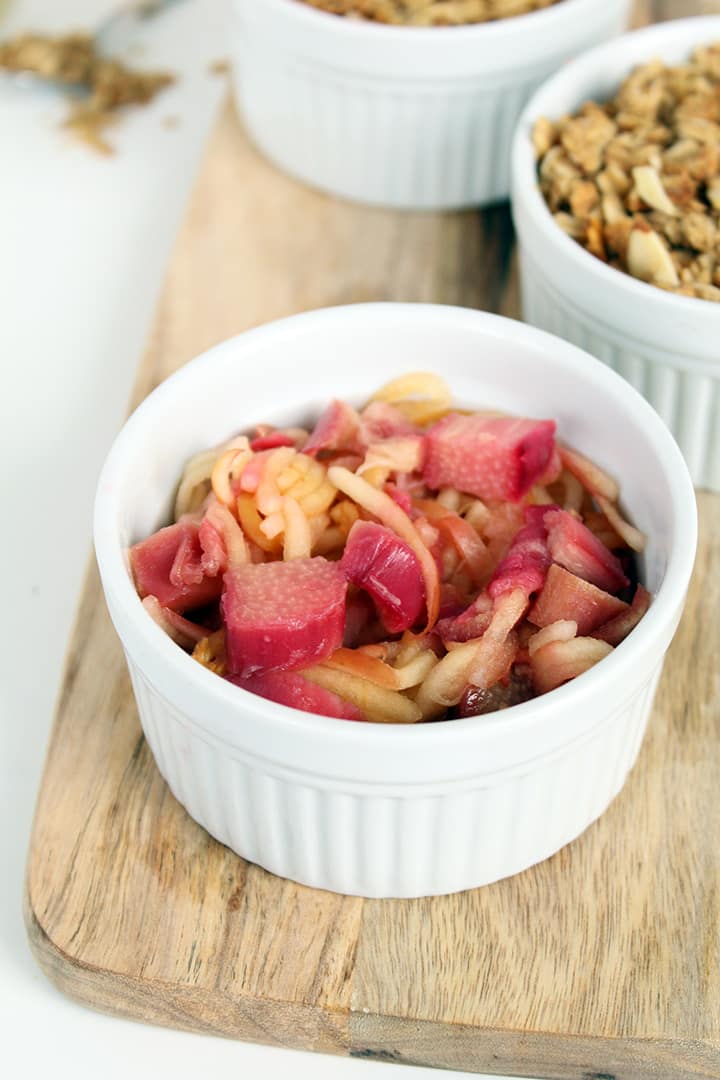 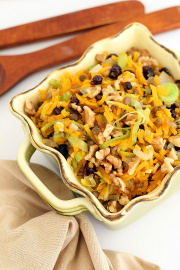