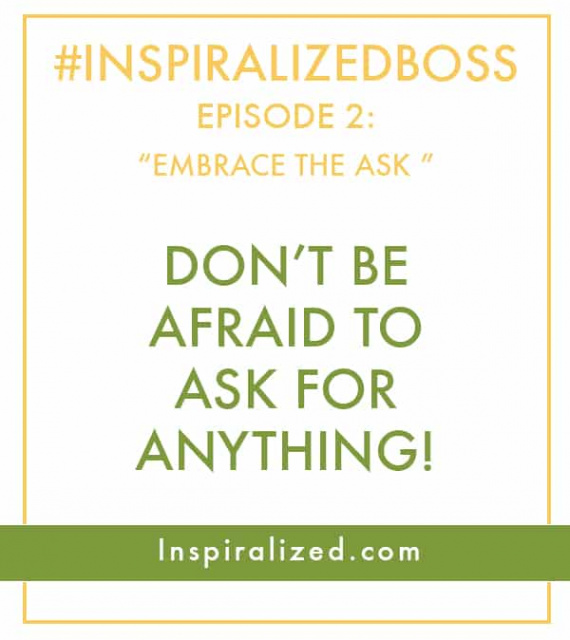 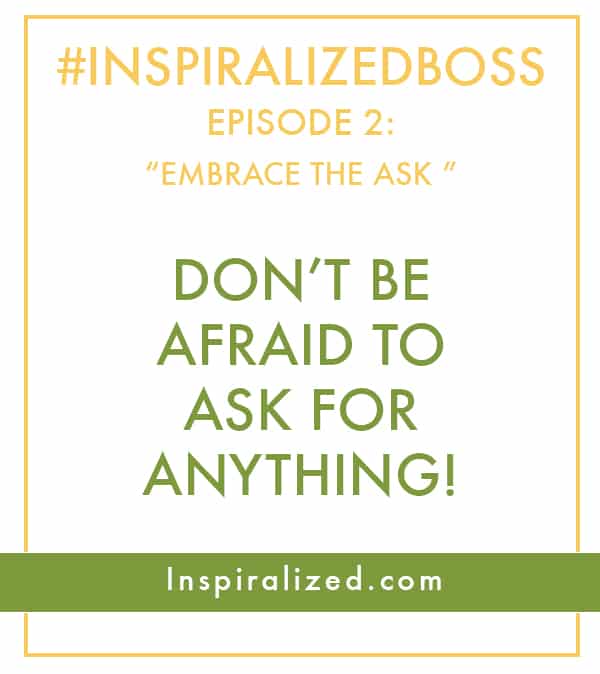 Every Friday, we’ll be posting short and quick business stories, tips and resources that have helped us grow Inspiralized. The series will be called #InspiralizedBoss and we hope they inspire others!

FROM THE DESK OF ALI MAFFUCCI, FOUNDER, INSPIRALIZED:

Asking is easier said than done.

I used to have a hard time asking for things. I hated inconveniencing people and putting them on the spot. I’d also feel anxious whenever I knew the time came to do the asking.

It could be anything from asking a friend, “Hey, can I borrow your cute sweater?” to closing a business deal.

So, you’d think it’d be in my blood and my nature to be sales-y, but in fact, I don’t have that natural gift. Thus, I’ve had to do a lot of “growing up” with Inspiralized, because if something doesn’t get asked for, it won’t happen.

[bctt tweet=”If something doesn’t get asked for, it won’t happen. #inspiralizedboss via @inspiralized”]

How did I overcome my fear of asking? Honestly, once I started Inspiralized I immediately came over that fear, because my livelihood and the success of my business depended on it. When you have absolutely no one to lean on or do anything for you and it’s all dependent on your actions, you become empowered. It’s like a fever that takes over your system and you become a confident, powerful person! I think most entrepreneurs feel this way – it’s exciting to see your hard work turn into success stories.

If anyone’s hesitant to “take that leap” into entrepreneurship because of their lack of confidence, shyness or inexperience, I’m here to tell you that you will be surprised at your “business instinct” (like a maternal instinct) that snaps into action when you need it most.

My most notable example: When Williams Sonoma first starting selling a spiralizer in their stores (about December 2013/January 2014), I immediately took notice (because I set up Google Alerts for every possible term relating to Inspiralized/spiralizing.) I knew I wanted to work with them (who wouldn’t?!), so I looked up the Chief Marketing Officer online, guessed the e-mail cadence and sent the e-mail.

I hope this message finds you well. My name is Ali Maffucci and I am the blogger behind Inspiralized, the food blog dedicated to cooking healthy and creative meals with the spiralizer, a new product that you carry online and in stores.

Inspiralized is the only resource out there dedicated to the spiralizer exclusively.

I started my blog on June 26, 2013 and have already grown a sizeable readership. I have attached my media kit for your review, but I am currently receiving around 7,500 average daily page views. I have over 6,300 Instagram followers and 2,930 Facebook fans.

I was elated to learn that Williams Sonoma is now selling the spiralizer, and I even have a link on my blog to direct readers towards your store.

I look forward to hearing from you. I am based in Jersey City, NJ.

From this simple e-mail, a lot has changed in my journey with Inspiralized. I have been featured on Williams Sonoma’s blog, I’ve had their support in-stores (their sales people tell almost everyone about the blog!), I’ve written a cookbook (see story below,) I’ve done an Instagram takeover with their marketing team, I’ve visited their offices multiple time sand now, the Inspiralizer is sold online at Williams-Sonoma.com.

All from ONE single e-mail with a simple ask to collaborate!

In November 2013, I decided to self-publish a cookbook to offer my readers something to gift along with the spiralizers they were buying for friends and family. I published this and after being connected with Williams Sonoma for a few months (via that e-mail!), they took notice and offered me a cookbook deal. I’ll never forget the moment – I was sitting outside on a patio at my parents’ place in Singer Island, Florida and I got a random call from a San Francisco number. I didn’t take it, it went to voicemail. When I opened the voicemail, it was Williams Sonoma offering me a cookbook deal!

Long story short, this accelerated my quest to be an author, I got a literary agent the next day and the rest is history. Well, still history in the making!

Furthermore, from this original connection made, it eventually led to me asking the head cookware Buyer at Williams Sonoma, “Can you carry the Inspiralizer at Williams Sonoma?” THAT was the biggest ask I’ve ever had to do. That full story is for another #inspiralizedboss post.

Now, if I had just thought, “Who am I? Why would Williams Sonoma want to work with a nobody?” and hadn’t sent the e-mail and had the courage to ASK, where would I be today? There’s a great chance I wouldn’t have a cookbook or it wouldn’t have come at as quickly as it did after starting the blog. I probably wouldn’t have my product sold online at Williams Sonoma, either. Now, Williams Sonoma is one of my strongest partners and I’m so honored to be a brand they support.

Thank you for tuning in, and I hope you learned something new from this week’s #InspiralizedBoss post. 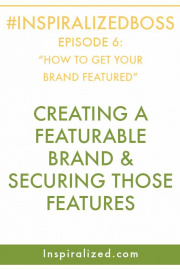 #Inspiralizedboss, Episode 6: How To Get Your Blog Featured