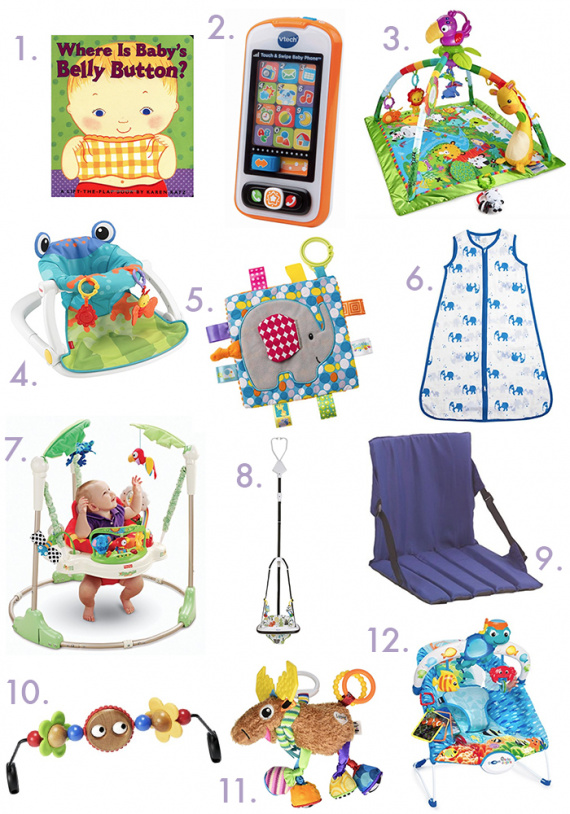 this series is a LONG time coming: BABY FAVORITES. things that my baby (and me!) are loving at this stage. I should've done this for month 1, 2, and 3, but alas, it's better late than never, right? for this series, I'm just going to list the things that made month four great!

this series is a LONG time coming: BABY FAVORITES. things that my baby (and me!) are loving at this stage. I should’ve done this for month 1, 2, and 3, but alas, it’s better late than never, right? for this series, I’m just going to list the things that made month four great!

and of course, you can check out newborn favorites.

1. books: Luca loves bright colors, large images, and nothing too fancy (ie no watercolor or painted books.) his patience is also short, so long books haven’t worked well. our favorites are the Karen Katz books (Where Is Baby’s Belly Button? is his fav!)

2. light up toys: Luca started really enjoying toys that light up (battery operated) with music. he goes wild over his first cell phone and his piano keys.

3. play yard: Luca started really engaging with play yards – actually spending time with the toys instead of just laying there and staring. it’s adorable to watch. he outgrew his first Fisher Price mini play mat (I loved it for the first three months!) and now he’s onto this one – it lights up and he even loves tummy time more because it’s so brightly colored on the bottom.

4. floor seat: this was a God-send. seriously. Luca loves sitting it and watching Mommy walk around the kitchen and cook. if he gets fussy, there are little toys on it that I’ll put in his hands or I’ll sing to him as I cook. it enables me to be hands free and get more done. sometimes I put him on it on the floor and fold laundry. it’s amazing!

5. crinkle toys: he has always loved crinkle toys, but now he’s starting to really love them, because he can crinkle them himself! it’s adorable to watch.

6. sleep sacks: Luca has slept unsaddled since about 6 or 7 weeks. once we started sleeping him on his tummy (around 5-6 weeks), we noticed he didn’t need to be swaddled to sleep. during the daytime, we just put a blanket over him (because we’re watching him on the monitor), but at night time, we LOVE these Aden and Anais sleep sacks. they’re great especially when we’re down in Florida, because they’re lightweight so they don’t make him sweat. he seems to love them and he looks so adorable in them! he wears a size Small right now, but we’ll probably start using a Medium in a month or two.

7. jumperoo: I crack up hysterically when Luca is in this. he jumps around like crazy! he’s probably a few weeks too early for it, so I don’t put him in it for that long (maybe 10 minutes max), because he doesn’t have the ability to sit up unassisted, so I don’t want to stress out his spine (I read too much on the Internet, haha.) he LOVES it and there’s so much for him to look at!

8. graco door jumper: when I’m in my bedroom cleaning or putting on my makeup or getting changed or just want another activity for him, he loves this door version of the jumper. it lets him look more around less than on toys and he seems to be able to hold himself up easier in this. we started on it just about when he turned 4 months. he loves this one and I love that it has bumpers, because he hits the door moldings and there’s a buffer between him and the wall (and it won’t wreck our door frames!)

9. coleman stadium seat: now that Luca’s playing more with toys, I couldn’t live without this. it basically creates a little seat for you so you have back support. I can sit all day long in this thing, it’s comfortable and allows me to rock back and forth. sometimes I read him books in it on the floor or play with a toy and he’s in my lap and I don’t have to hunch over.

11. moose toy: don’t ask me why, but he’s OBSESSED with this moose. he can literally play with it for 20 minutes. you have to of course play with it with him, but it keeps him occupied – maybe it’s the colorful feet or the fact that it squeaks, but he loves it.

12. baby Einstein chair: what I love about this one is that the baby can entertain himself alone! he grabs at the little dangling toys. he loves the lights and music. when he gets a little antsy, I take off the bar that holds the toys and it’s just a great bouncer chair to seat him in. I always use this one first thing in the morning when I have to pump, because I need him to entertain himself!

and that’s pretty much it!

let me know if you like this “baby favorites” series and I’ll continue to do them! 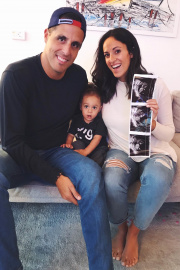