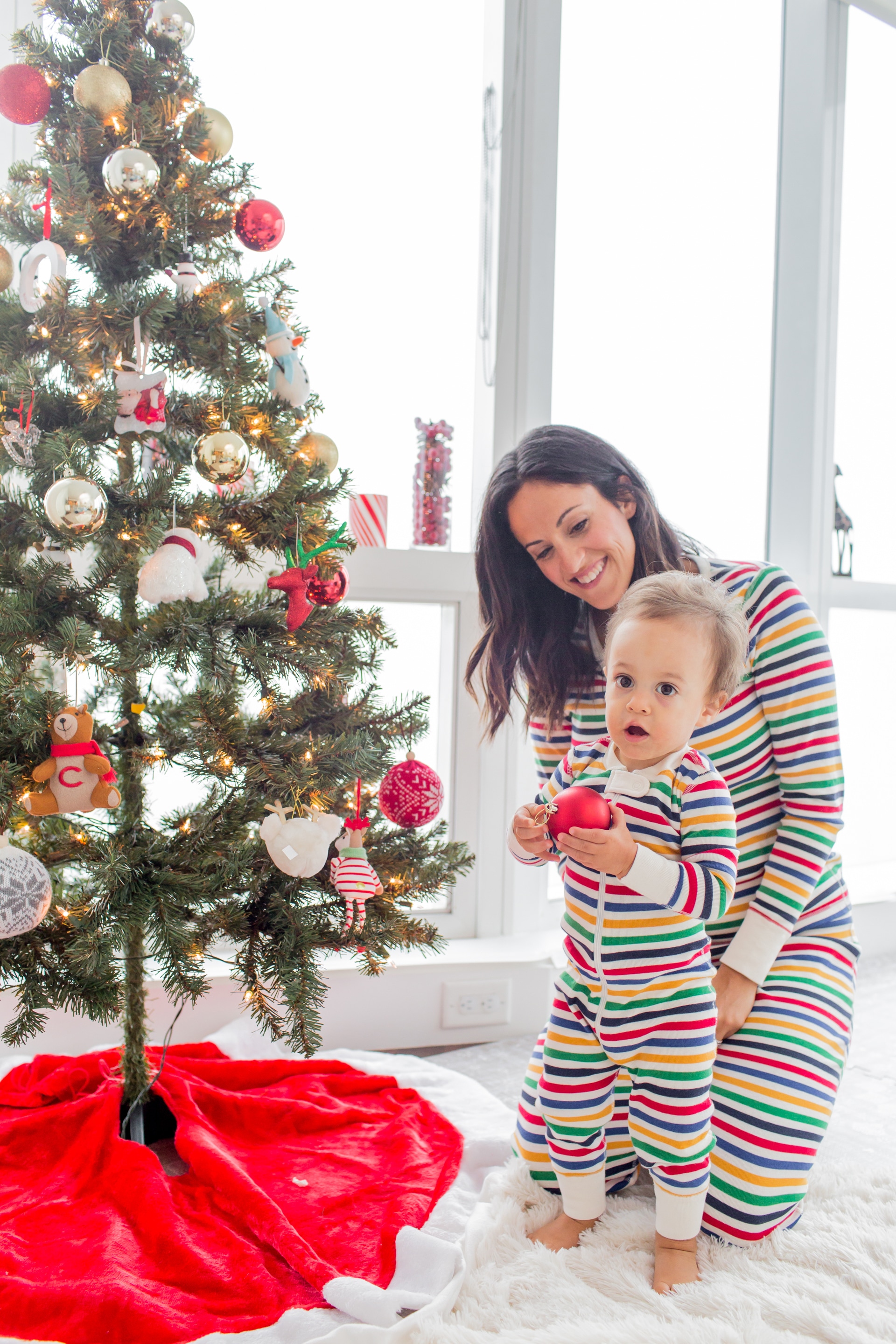 When Luca was 5 months old, I decided it was time to go back to work full-time and so we hired a nanny (more on how we found her and our thoughts on the whole thing, here and our 3-month nanny update, here.) Our nanny has become a part of our family, and I couldn’t imagine life without her! She’s amazing with Luca, reliable, trustworthy, dependable, understanding, and has honestly helped me through many stages of infancy and toddlerhood with her expertise (not only having 3 children herself – including twins!, but having nanny-ed for several other families, she has a lot of experience.)

Finding the balance between working full-time at home and having a nanny at home definitely has its challenges, but we’ve found a groove that works, and I’m sharing that today. And one thing that is super important is constant communication with your childcare provider (whether that’s a nanny or a daycare teacher!) We have a very respectful, understanding, and friendly relationship, and I’m very thankful for that.

Breastfeeding has a lot to do with this. When the nanny (I’ll call her Mrs. S for privacy’s sake) started, I was nursing Luca on demand, 4-5 times a day. Needless to say, my day was broken up, and I had 15-20 minute blocks with Luca at least twice a day (mid-morning and mid-afternoon.) Therefore, I didn’t leave much during the day, or if I did leave, I planned my ‘outings’ around my nursing sessions. One of the main reasons I chose nanny over daycare is so I could continue to nurse Luca.

Nursing Luca made it difficult to be productive, to be honest. Between making him meals (once he turned 6 months old) and nursing him, I felt like I was only working 3-4 hours a day. It was difficult to find a balance. In retrospect, I probably should have pumped for one of those feedings and let Mrs. S give him a bottle so that I could find my work flow a bit better. You live and you learn!

Once we got down to 3 nursing sessions a day, that meant only one nursing session (ours was in the morning), which gave me the entire late morning and rest of the day to focus on work. It was very liberating, and I found myself being much more productive. Now, we’re down to 2 nursing sessions (morning and night), so I don’t nurse at all during working hours, which has been a game changer. I’m able to get a full work day in!

And when I was nursing him, it was hard to pass him off to Mrs. S, he’d cry a little bit (you know babies – just for 30 seconds or so), and I’d immediately feel guilty. Knowing that we had these 15-20 minute sessions together, though, did make me feel a bit less guilty, because at least I was able to have that time with him. But in return, I was less productive and got less done for work. The balance was off until we got down to two nursing sessions a day!

Another way I’ve made things harder on myself, haha! I cook every single one of Luca’s meals and snacks and sit down with him at almost every single meal. Since food and cooking is kind of my thing, I really enjoy these times together, though. However, it’s definitely taken time away from my main work.

If you’ve been following Luca’s food journey, you know that we are doing baby led weaning. It’s a non-traditional way of introducing solids to babies and there’s a learning curve (not only for me, but for others around Luca- like the nanny, my parents, etc.) Thus, I wanted to make sure Mrs. S saw the process, saw how Luca ate, the philosophy behind BLW and how to properly serve and encourage Luca during mealtimes. I even found a baby led weaning guide in Spanish and gave it to her. She was very, very nervous in the beginning and almost couldn’t handle it at times – she even told me later on that she was so scared, she didn’t know if she would make it through meals!

So, for the first 7-8 months of Luca eating solids, I sat down at every single meal and snack time. Crazy, I know. At first, I was even helping cleanup, but then I realized that that left me very little time for work (especially because I was still nursing him, cooking his meals, etc.)

For the past month or so, I only sit down with him for breakfast until Mrs. S arrives (she gets to our apartment at 8am) and then if I feel like I need a break or have been really productive on a certain day, I’ll take the 15-20 minutes and sit down with Luca for lunch and the occasional snack. It’s a much better balance, and it builds up Mrs. S’s confidence with solo feeding Luca at mealtimes.

I’m so happy I did this (sat with her at mealtimes), because while I was gone for a couple of trips for several days, I was confident that she could offer Luca his meals appropriately. There’s no spoon feeding or cajoling in baby led weaning/this food philosophy, so it’s important that everyone understands.

Luckily, I have Inspiralized Kids now, so a lot of the meals I’m making for him I can document into content  and inspire other mamas and papas to cook healthy meals for their little ones. Thus, I’m kind of working while I’m making Luca’s meals! 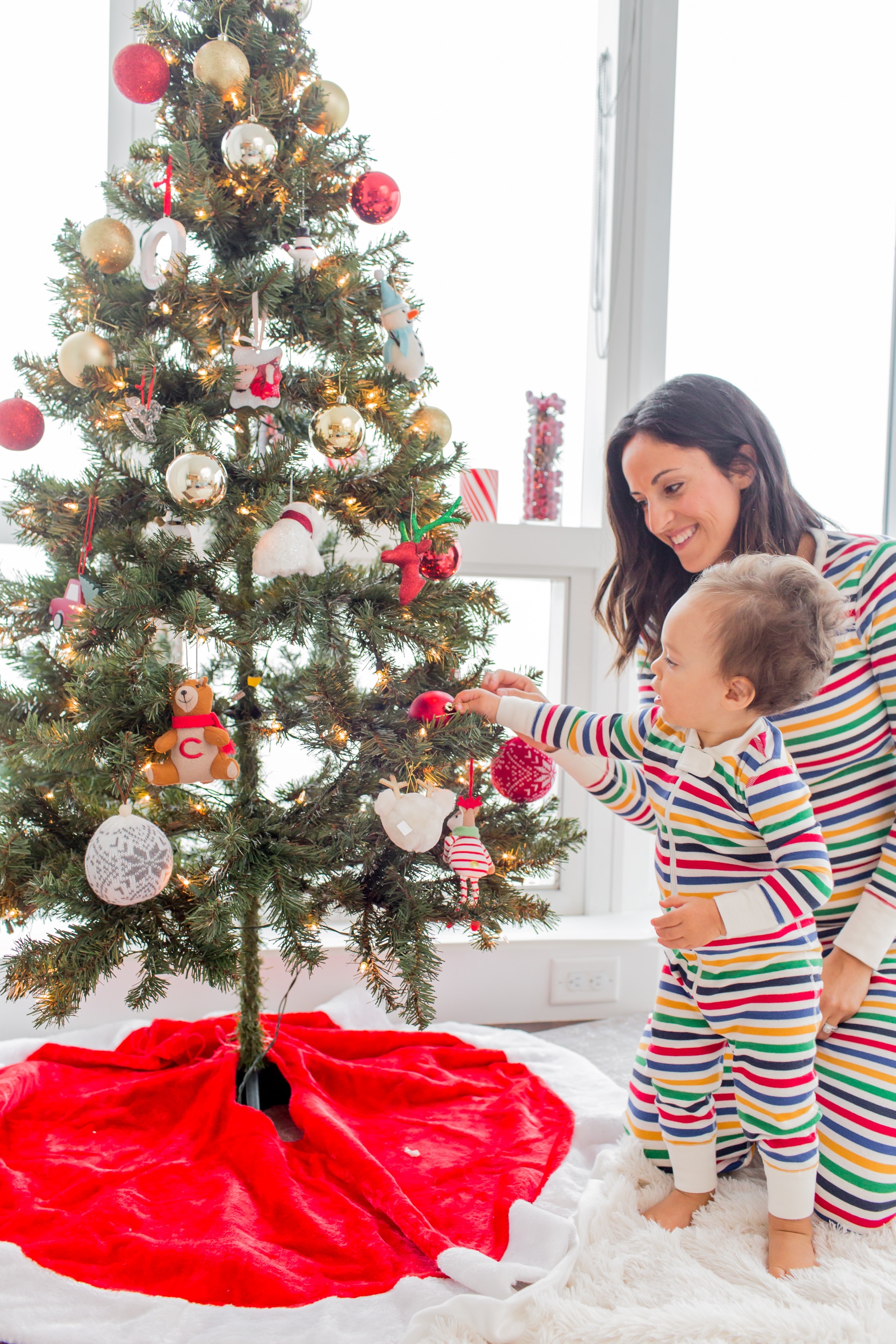 Being home with the baby home

Mrs. S is exceptional at finding activities for Luca and being outside of the apartment. Luca’s actually rarely home, only for mealtimes and naps! She takes him on stroller walks, to the nearby parks, to the waterfront and sets up a little play area with a blanket and toys, to nearby indoor buildings (with shops, spaces to play and walk around), has play dates with other babies in the building (we also have a kids room in our building and he loves it there), and attends gym and music classes in town.

So, as you can see, he’s not home much, aside from meal times and naps. We’ll see how the winter goes, since Mrs. S has mostly worked in spring, summer, and fall so far, where the weather hasn’t been an issue!

When Luca is inside for whatever reason (maybe it’s raining outside or he’s just happily playing inside at the moment), I try not to be in the same room as him. My office is a little den when you first walk into our apartment, so it’s not separated by any doors, so Luca can walk right in, but if he’s in the living room playing, there’s a baby gate and he can’t get out and he can’t see me.

I plan all of my cooking for the blog around his nap times and when he’s out of the house with Mrs. S, because our apartment is small and an open floorplan and the kitchen is right there. If he sees me in the kitchen, he won’t want to play with Mrs. S or he’ll cry for a little bit and want me to be with him, which is heartbreaking. So, the best way to manage this is build my work around times when he’s not home or napping. It has worked really well so far! 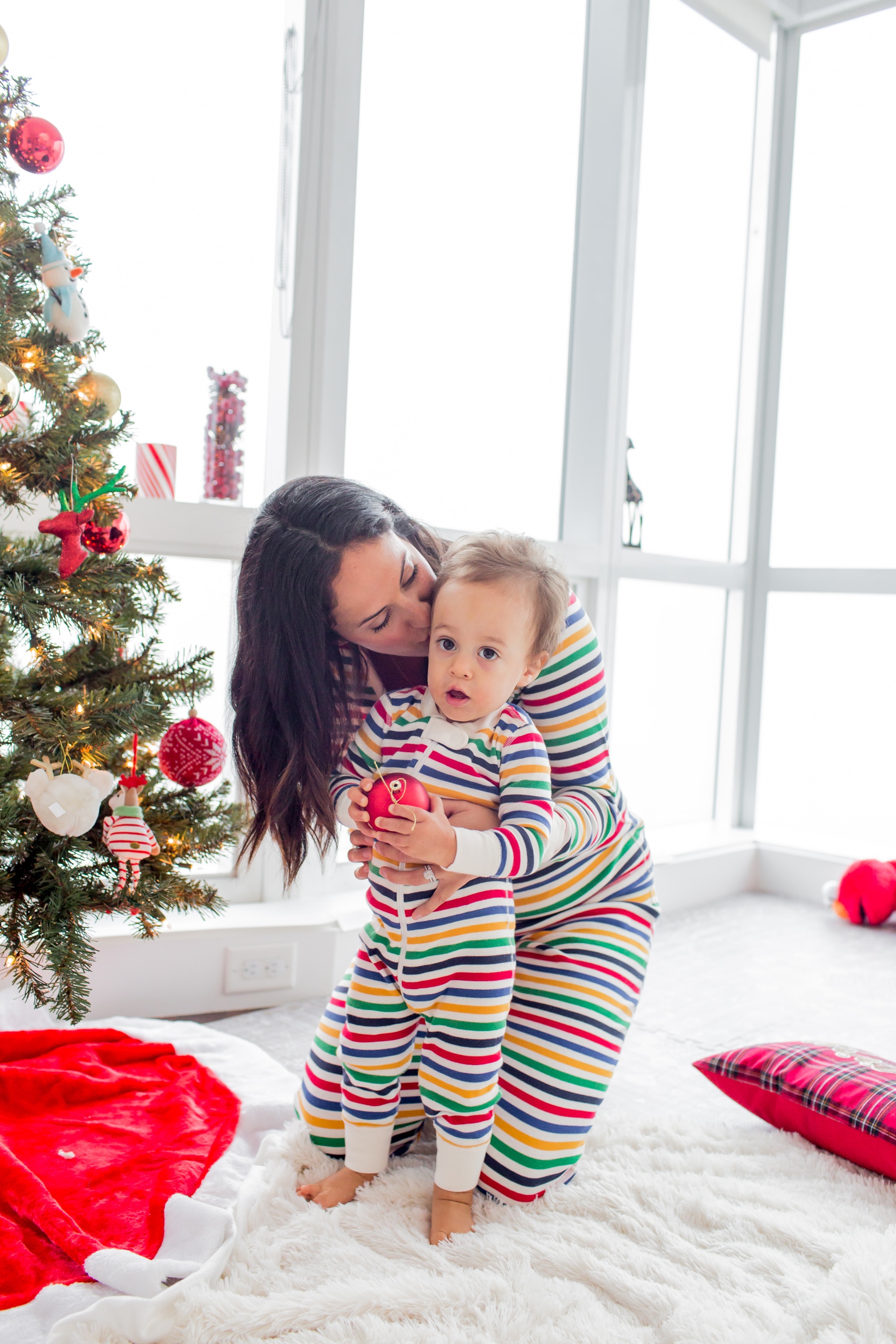 Even though it may seem that I could see my baby whenever I want to because I work from home, I still feel guilt ridden and maybe moreso than someone who works out of the home. You see, just because I physically can spend time with Luca whenever I want, doesn’t mean that I can. Just like someone who works in an office outside of the home, I have deadlines, calls, meetings, and work to do. I’m an entrepreneur, if I’m not present, work doesn’t get done. I can’t just go play with Luca for an hour, because I have a lot of work to squeeze into my day.

Having said that, there’s guilt there because I could be spending time with Luca instead of working. Like, physically, I’m home, you know? That’s where the guilt sets in. If I start to get distracted and in a non-work-related YouTube binge or something, and Luca is out with the nanny or even home playing in his room, I can get really hard on myself. I think, “You should be spending time with Luca instead of wasting your time right now!” It’s like, if I’m not 100% productive 100% of the time, I feel really guilty.

Another way I feel guilt is through social media. When I post something on social and it doesn’t perform well, doesn’t get a lot of clicks, likes, comments, etc, I ask myself, “Why the heck am I spending time on this when no one cares? I’d rather be with Luca!” It’s really tough to live in a world where a lot of your success is based on analytics like that.

So yes, I feel guilt ALL THE TIME, even though I work from home and can give kisses and hugs to Luca every time he walks out the door (granted I’m home at those times!), spend some mealtimes with him, and hold him when he is sick that day. We all feel guilt as mamas, whether we work from home, work outside the home, or are full-time mothers! It’s normal and to be expected.

How do I manage this? Being super productive during the day and not spending time with Luca means that when Mrs. S leaves for the day at 5:30pm, I am all Luca’s and can fully give my time to him. I actually stop my work day at 5pm to cook him dinner so that when the nanny leaves, at 5:30pm, dinner is ready and I don’t have to spend anymore time away from Luca. We usually aim to eat together (I have a small portion of whatever he’s having) between 5:30-6pm. We play nonstop until bath time around 6:45pm and then it’s books, boob, and bed!

I hope this answers everyone’s questions about balancing working from home and being with the baby! Let me know in the comments if you have any other questions, and I hope it helped some of you mamas who work from home. 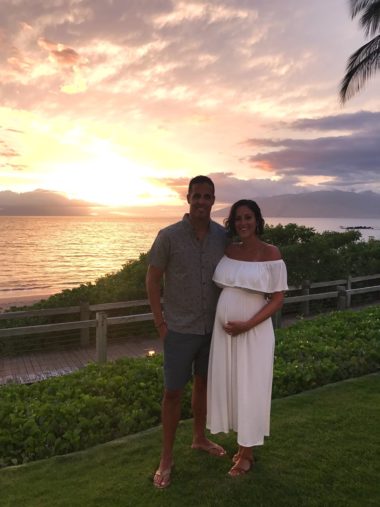 our babymoon in hawaii 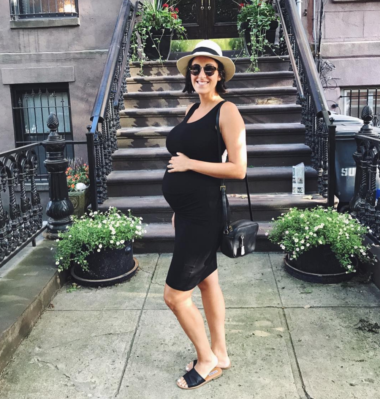 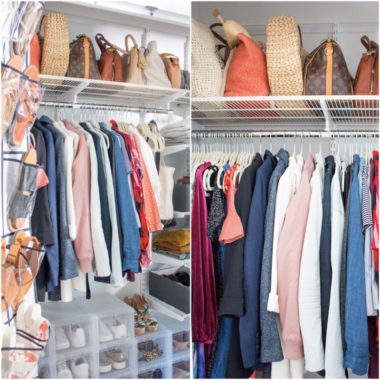 Wardrobe and Bedroom Closet: Before and After 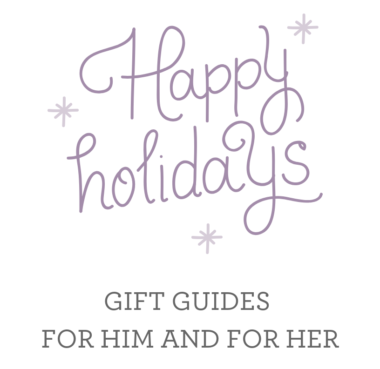 Holiday Gift Guides For Him and For Her 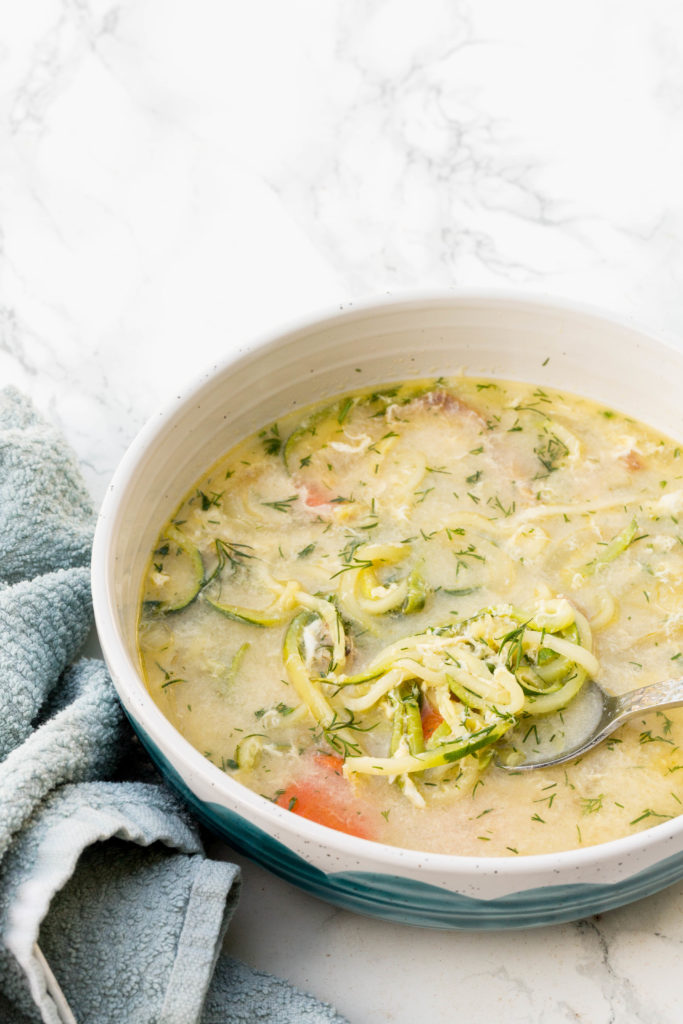 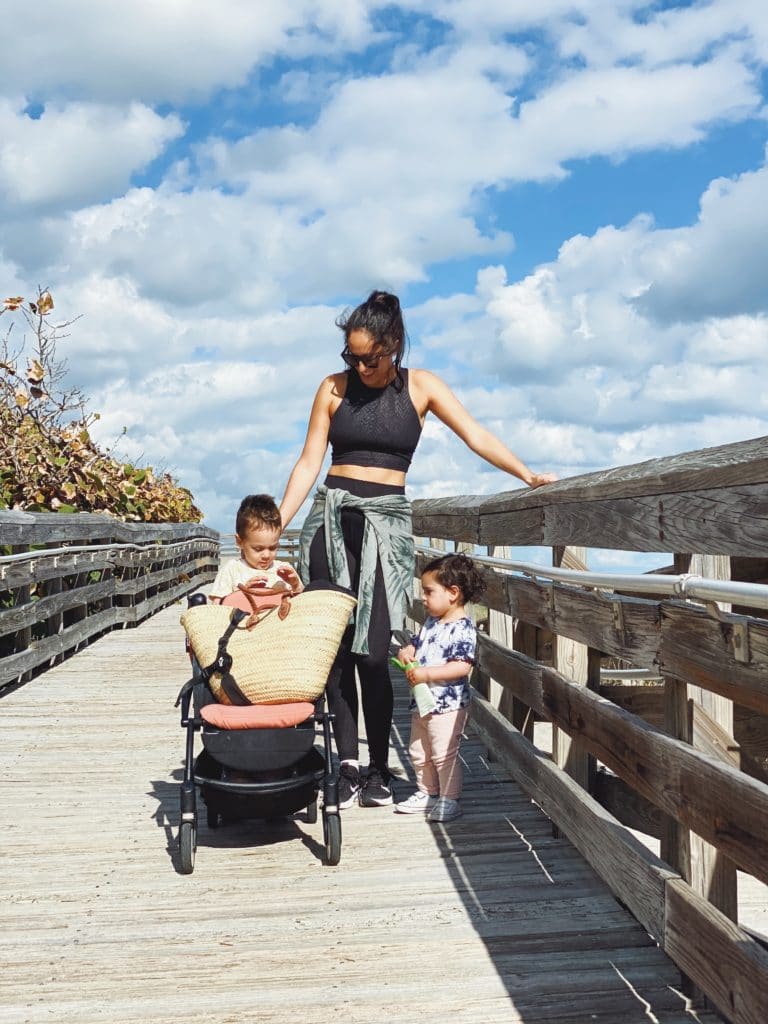