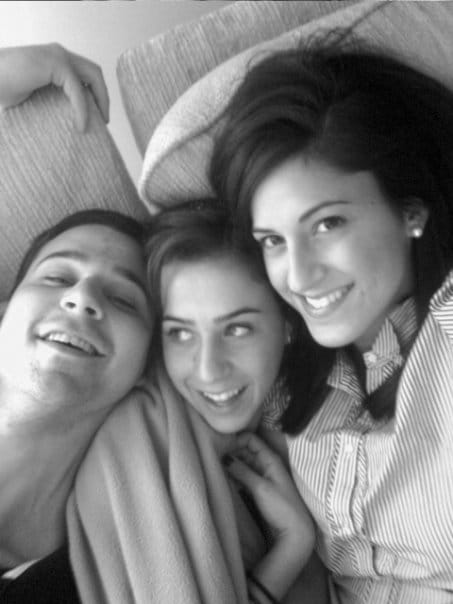 so, I have a brother

whenever I talk about my family, I only ever speak of my parents, grandparents and my sister. but, I actually have an older brother named David, who is 34 years old.

whenever I talk about my family, I only ever speak of my parents, grandparents and my sister. but, I actually have an older brother named David, who is 34 years old.

now, let me back up. there are a few reasons why I wanted to open up about this to you all. first, I always hope my content helps someone else out there struggling with the same thing. second, I’ve never openly discussed my brother and I hoped it would be therapeutic and after I wrote this post, I was right: it was. lastly, social media and blogging is truly just a highlight reel, and I think it’s important to open up about the tough parts of our lives. bloggers put our lives out there for others to watch, but we often avoid sharing the more sensitive topics or not-so-glamorous bits.

I recently received a DM on Instagram where someone said, “you just have the perfect family! #lifegoals!” While this is a totally sweet thing to say, I immediately thought of my brother and how perhaps sharing my story about his part in my family will bring me closer to all of you, show you that every family has its issues and hardships.

growing up with david

my brother David suffers from Bipolar Disorder, which is a type of depression characterized by extreme lows and highs. one week (or day, month, year, etc) he’s going to conquer the world and the next week he’s contemplating suicide. it’s a horrible mental disorder and I’ve seen him struggle with it for my entire life. he refuses to take medication for it (but he’s tried most of the anti depressant medications after his diagnosis.)

growing up in middle and high school, Dave was your classic “trouble maker.” he got in fights at school, he got arrested, refused to acknowledge laws and rules, and he would disrespect my parents by doing things like coming home in the middle of the night drunk with friends and starting chaos. he refused to get out of bed to go to school. he smoked pot, drank underage, did typical rebellious teenage stuff.

he went through a big punk stage at one point, a very “thug” phase (these are his words), and many other “phases” where he was clearly just trying to find his way. and his mental disorder made that hard.

he ended up going to an alternative high school, because he needed special attention and to be in a different environment. he graduated from high school and never went to college. after high school, he continued struggling to find his path. he worked odd jobs, tried working for my father (a disastrous combination), and found sketchy ways to make ends meet.

the only thing he’s ever kept consistent on is his musical gift: guitar playing. he is UNBELIEVABLE at the guitar. he can play any song after just hearing it a couple of times, he rips through Jimmy Hendrix and blues music so well you’d think you were at a blues club. he’s very, very talented – and has been playing the guitar for about 20 years. and you can tell that when he plays, he’s genuinely happy. it’s beautiful to see. 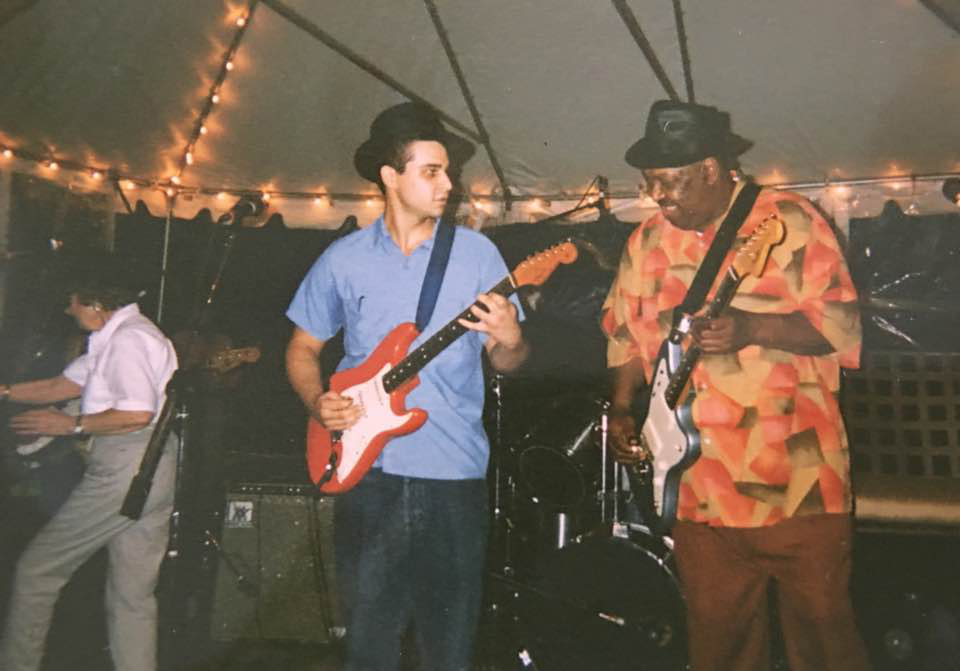 turn for the worse

finally, he decided to use all of the money he had saved up and buy a house in a very bad part of the west coast of Florida where drug use was prevalent (he did not know this at the time). this is where his life took a bad turn and he hasn’t pulled himself out of it yet. he became a product of his environment and this is when his severe drug addiction began. which led to other bad behavior leading to a criminal record and scary close encounters. from steroids to heroin to pills, he’s been in and out of drug addiction for the past few years. he’s been to rehab, he’s done detoxes, and he can’t pull himself out of it.

there have definitely been certain periods of time when we’re hopeful that he’ll turn his life around, but for the most part, we worry about him. we worry he might hurt himself intentionally or accidentally.

Dave and the family

it’s so sad to see Dave like this, because he is an extremely intelligent, sensitive, and loving person. I know he wants out, but he keeps getting in his own way. my mother offers him all the help in the world, but he continues to not accept it. my mother and my brother talk very often, sometimes every day (especially when he’s in a very low point in his depression.) he comes to her with everything.

my sister and I barely ever talk to him, because when we do reach out, we never get a response. after a few years of this, we gave up on trying to maintain a relationship with him. of course, if he needed our help to get sober and turn his life around, we’d be there for him. sadly, the only person he communicates with in our family is my mother, because she’s his lifeline. she bails him out of jail, she lends him money when things are really bad, and she listens to him.

otherwise, he has pushed away all of his family. he didn’t come to either of our weddings, he never even sent me a text message to congratulate me on having a baby. but my sister and I keep telling ourselves that it’s his mental illness, not him as a person. we know he loves us and wants to be part of the family, he just can’t get out of his own way. and that’s part the depression and part the addiction to drugs.

during middle and high school, I really resented Dave. I resented him because he was crumbling my parents marriage. the stress that David put on my parents was something I hope I never have to experience with my children. they fought and fought and fought and fought. they weren’t happy for a very, very long time. once David left the house, things got a lot better, but it was scary – my sister used to run into my room because they’d be screaming at each other so loudly that she would get frightened. he used to get in fist fights with my father.

so, for a very long time, I really, really resented Dave. now, with his drug addiction, the way he treats us (and especially my mother) is so disrespectful, inconsiderate and hurtful, that I can’t talk about it. I don’t talk about it, because when I do, I get really worked up about it and I just feel bad for my mother, that she has to deal with this. and no one knows how to deal with it.

dave’s influence on me

in middle and high school, my mother used to always say to me, “you keep me sane.” now, that’s a lot of pressure for a child, but I lived up to it. I wanted so badly to be NOTHING like my brother, that I became the exact opposite of him. I wanted my parents to be proud of me.

I excelled in school, getting straight As, volunteering, signing up for every extracurricular activity, playing sports and captaining, not having a sip of alcohol all throughout high school, and in general, being a straight laced kid. I’ve smoked pot but have never tried any other drug and have no desire to, ever. 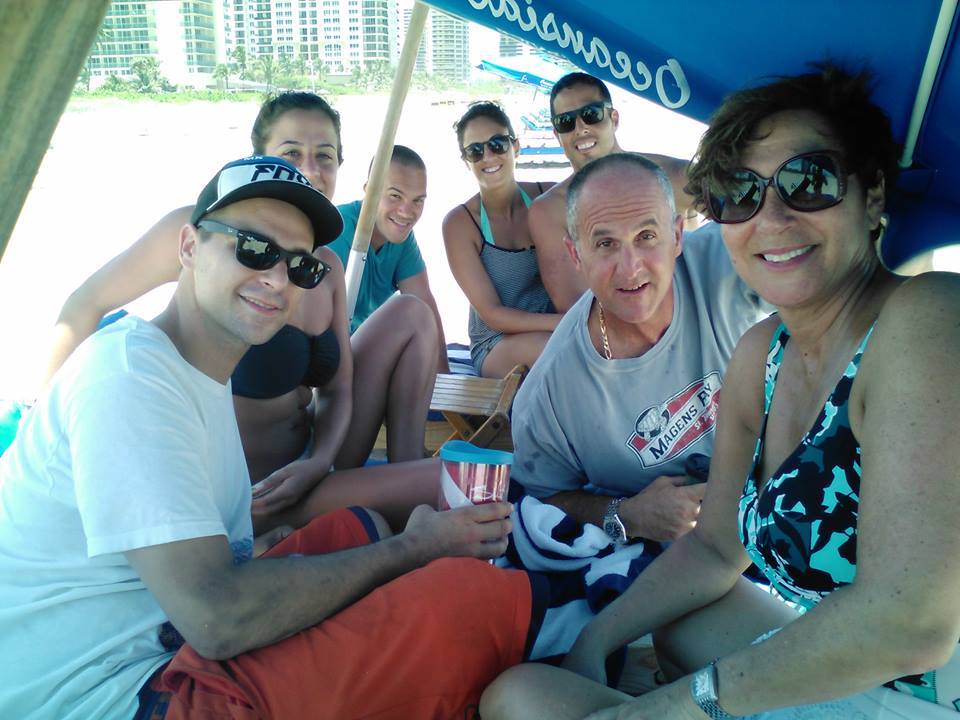 now and the future

I saw Dave for the first time in several years a couple of weeks ago while I was in St. Petersburg for HSN. he moved to St. Petersburg in an effort to get away from the area he was living in (the temptation to do drugs was just too hard) and unfortunately, he hasn’t been able to escape it.

it was of course good to see him (and he was sober) and it broke my heart when he met Luca for the first time. Luca gave him a smile, held his hand, and I could see how much it meant to Dave.

he really seems to want to get his life back on track and my mother is trying to help him find an apartment near her and my dad so they can help him. so, we’ll see. this happens all the time and it never ends up panning out, but we never lose hope. it’s hard to keep up the faith with Dave, but I know we have to, because if we don’t have hope, how can he have it?

my hope for Dave is that he deals with his demons, his depression, gets off drugs for good and starts fresh. his family is here and we’re all ready to help him when he’s finally willing to accept the help. hopefully that will happen.

I hope you enjoyed this post – it was cathartic to write, and I encourage other people out there struggling to talk openly about it. the more open we are and the more we share, the more we can help others. thank you for taking the time to read this! 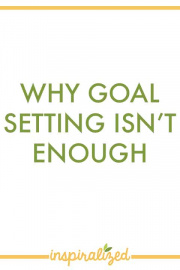