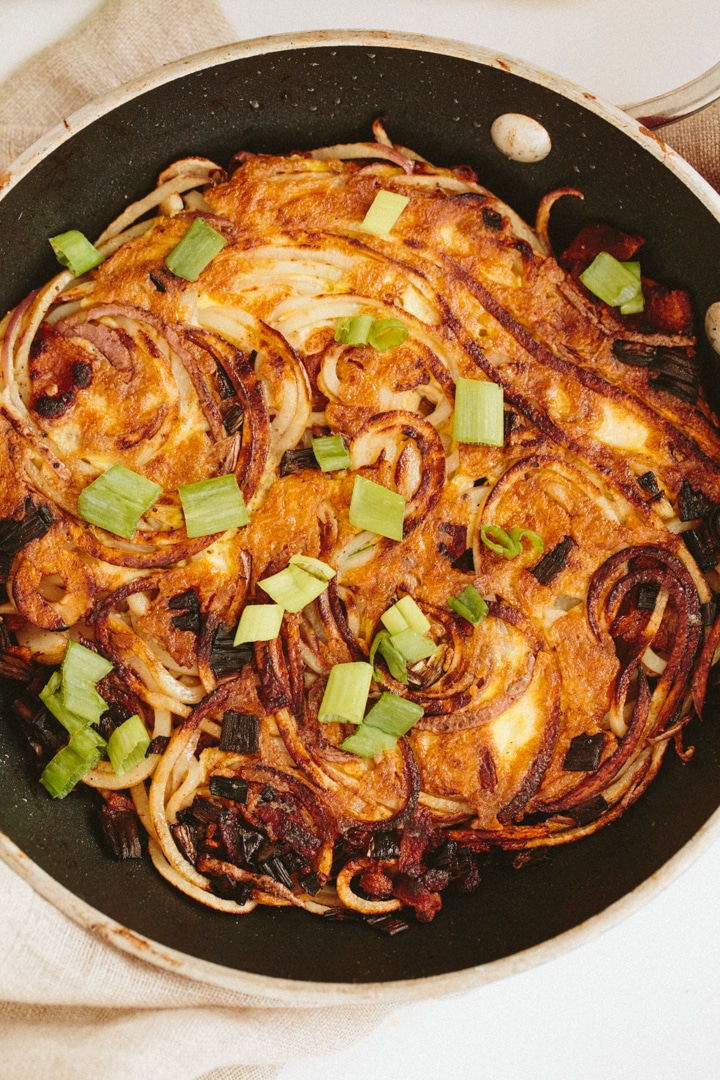 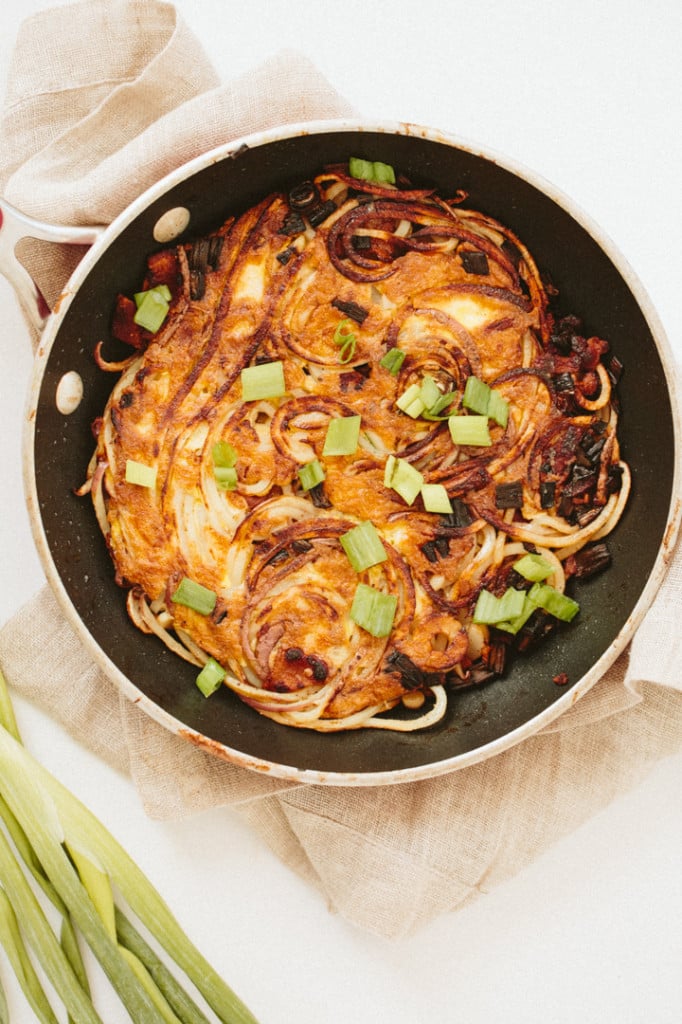 If you follow me on Snapchat, you saw that I attempted to cook a rosti from Bon Appetit.

Let’s just say that the name for the folder that holds the pictures for this post is labeled “rosti fail 2015.”

I think some things are better left for the pros, ya know? 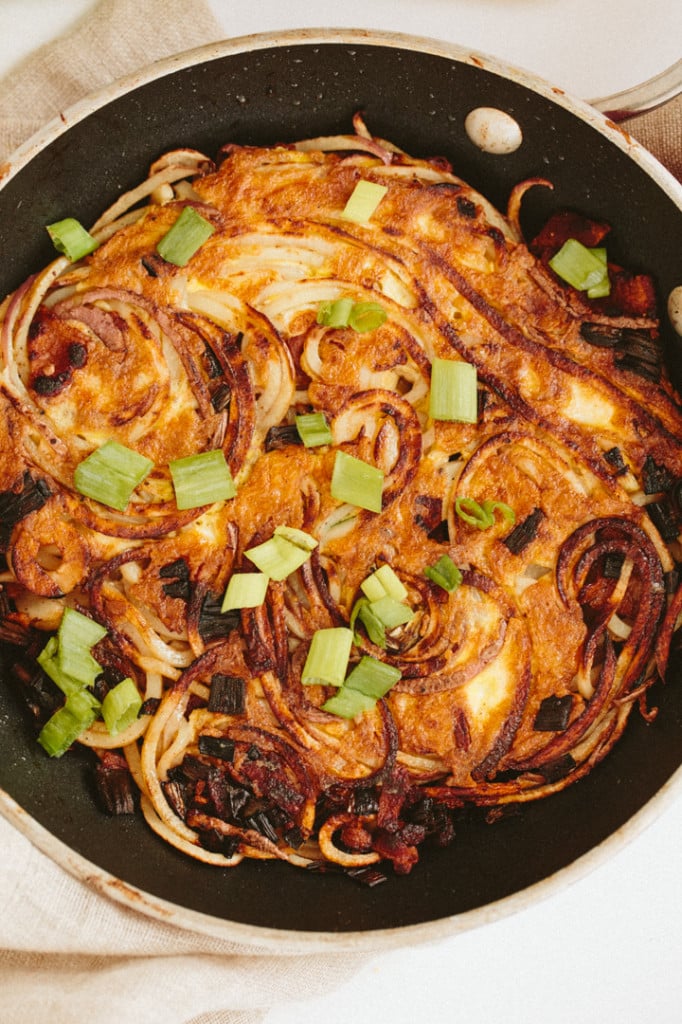 A rosti is like the Swiss version of hash browns. I was very excited to make the recipe, but it was too darn hard to flip – I kept burning myself and screaming expletives, so I gave up.

Here’s the fail picture (yes, I fail a lot in the kitchen!) 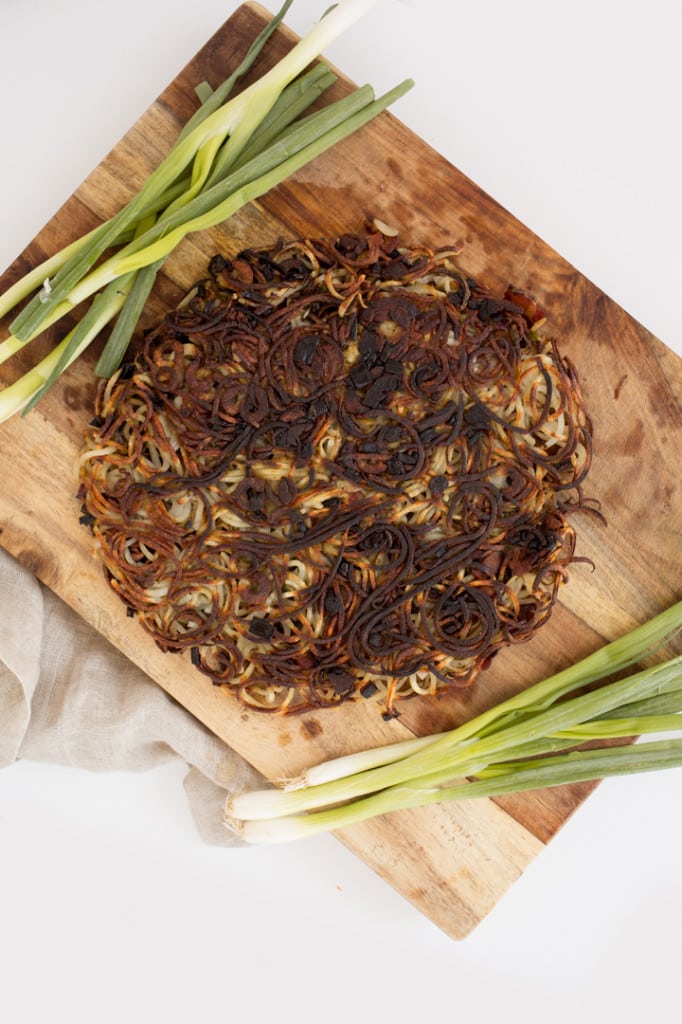 Instead, I decided to make a mini version (perfect for two!) This way, you don’t have to deal with inverting anything into a plate and then transferring it back into the pan and blah, blah, blah.

This recipe is easy and quick – and doesn’t require any pre-cooking of the potato noodles- simply add the noodles, bacon and scallions into a skillet, pour over the egg and let cook for 15-20 minutes until the potato noodles are cooked through. 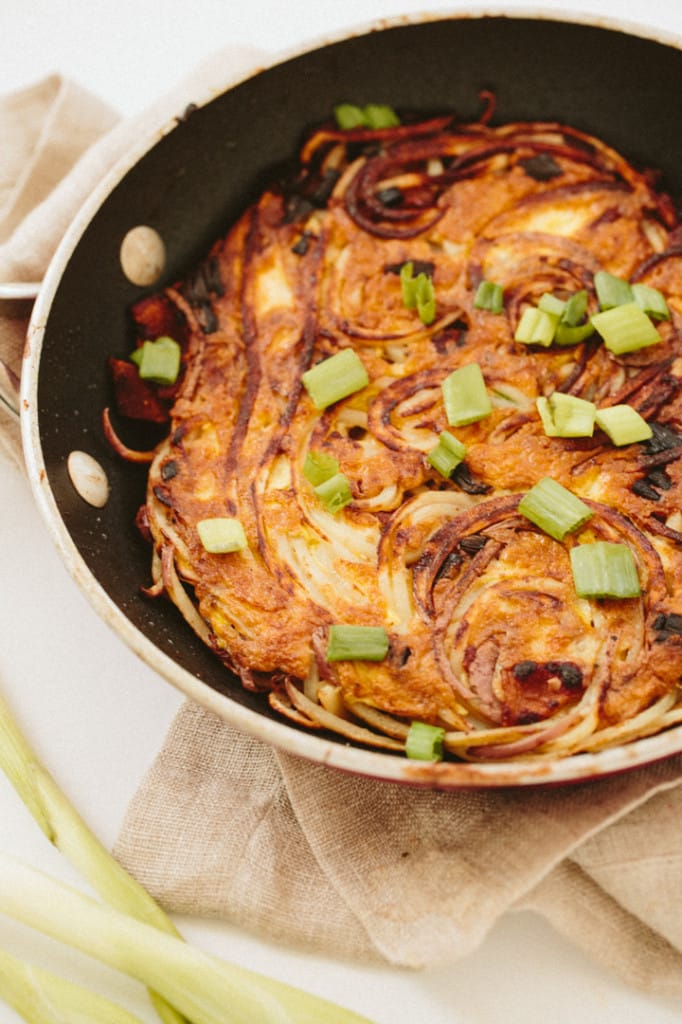 I’m a big hash brown gal, but I hate that when you go to a restaurant, hash browns are usually always cooked with butter and they leave that greasy taste in your belly. 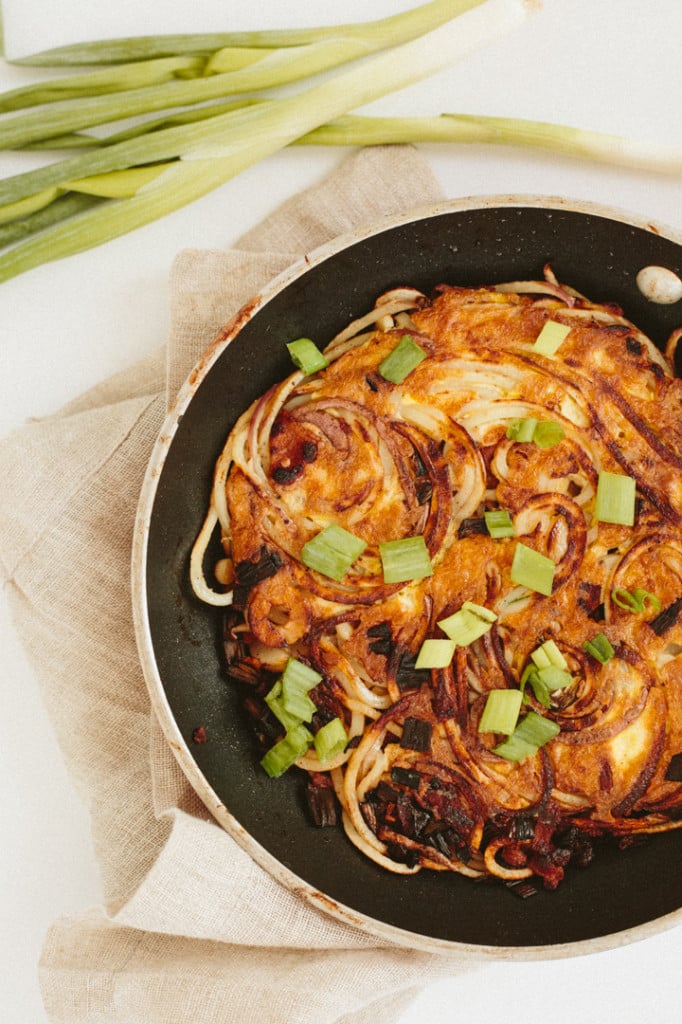 This mini hash brown cake gets all its fat from the bacon, so there isn’t much extra cooking fat needed.

Serve this alongside scrambled eggs, baked beans, breakfast sausage or even some sauteed spiralized apples for a diner-quality meal! 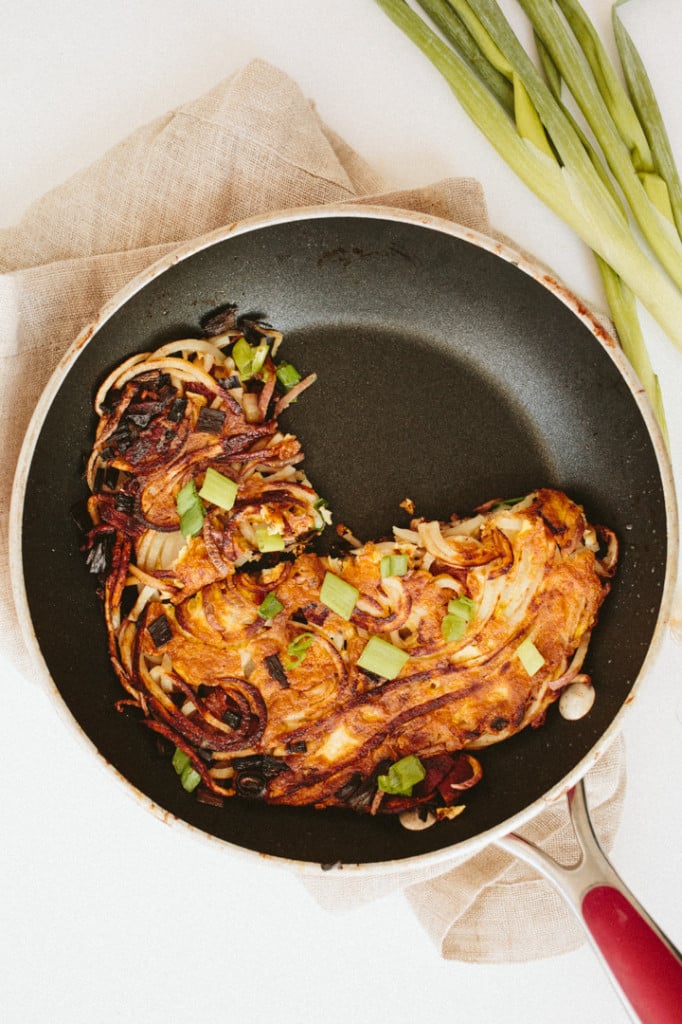 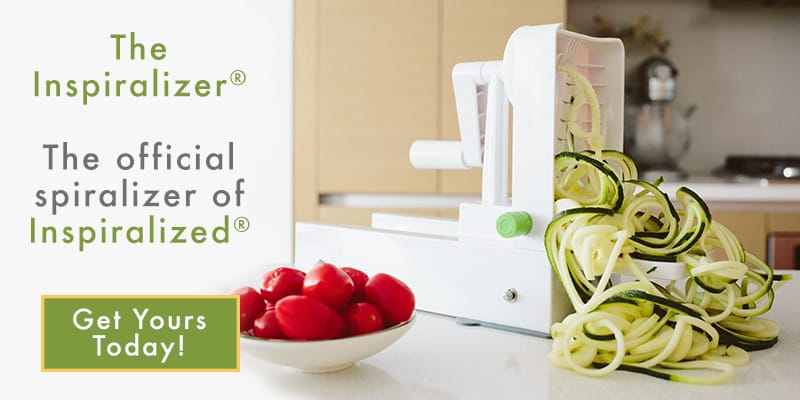 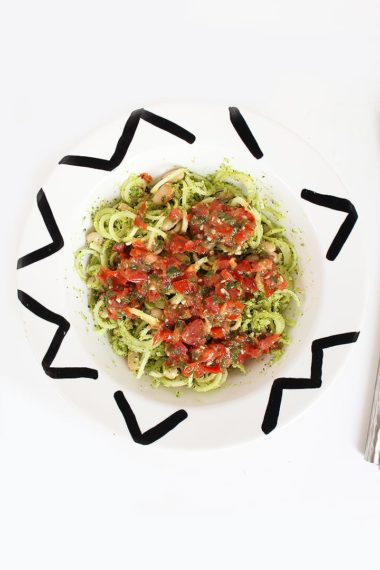 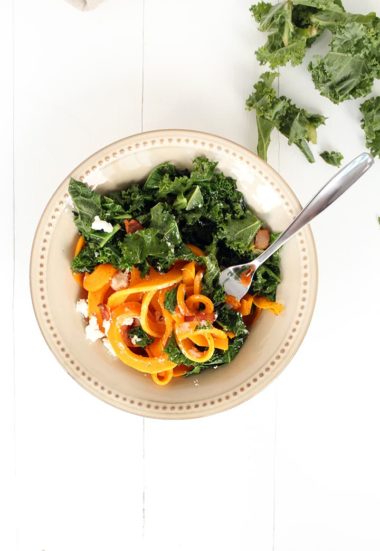 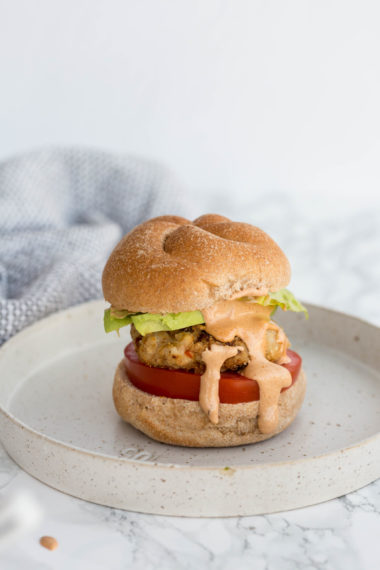 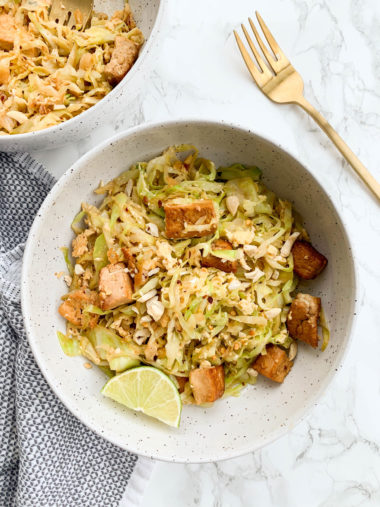 Abby @ The Frosted Vegan says:
September 15, 2015 at 8:56 am
A giant potato cake is something I'm TOTALLY on board with! I saw your snaps yesterday, it looked like it was quite..challenging, haha!
Reply
SK says:
September 15, 2015 at 9:09 am
It says this: "This recipe is easy and quick – and doesn’t require any pre-cooking of the potato noodles- simply add the noodles, bacon and scallions into a skillet, pour over the egg and let cook for 15-20 minutes until the potato noodles are cooked through." But there is no egg listed in the recipe. Is the description for a different recipe? Thanks!
Reply
Ali Maffucci says:
September 15, 2015 at 9:19 am
I updated the recipe! Sorry about that!
Reply
Barbra Watkins says:
September 15, 2015 at 9:16 am
Also wondering about the egg listed in the recipe, but not in the ingredients. Is it to help brown the potatoes?
Reply
Ali Maffucci says:
September 15, 2015 at 9:19 am
I updated the recipe! Sorry about that!
Reply
Susan says:
September 15, 2015 at 10:10 am
This recipe sounds wonderful, but I can pretty well guarantee you that I would not be up for cooking it for breakfast. It would be for lunch or dinner, when I have the energy to cook.
Reply
Sarah says:
September 15, 2015 at 10:30 am
I've done something very similar and used it as a pizza crust. Was delicious!
Reply
Florie says:
September 15, 2015 at 10:53 am
This sounds amazing and something my husband will LOVE!! However, as a 'Weight Watcher', I'm not sure your Nutritional numbers are correct. I ran a WW calculation to see what the "Points' would be and I think your numbers are if this is made as 4 servings??
Reply
Jan Ashworth says:
September 15, 2015 at 11:07 am
Thanks for sharing your "rosti fail" but I have a pan that would have helped the process. My pan is a fritata pan from Williams and Sonoma and I love it. That being said, I'll still try your mini hash brown cake and I printed on the back of your Spiralized Potato Noodle Kugel that was yummy.
Reply
Janet T. says:
September 15, 2015 at 1:51 pm
I'm chuckling about your adventure with rosti. We loved them when we were visiting Austria. Then we went to a cafe that had a rosti bar like we've seen omelet bars; with all sorts of toppings to be added. When we saw how rosti is made we knew why we thought they were so good. They had at least 1/2 inch of butter in the bottom of the pan and just cooked those shredded potatoes and grated onion until it was browned into a solid patty on the bottom, like one huge french fry. Of course then it wasn't hard to turn. No wonder we thought it was so good. Yours will be much better.
Reply
Anita says:
September 15, 2015 at 2:08 pm
Hi, this looks delicious but I'm vegetarian, you think it would be worth trying without the bacon? Any subs you recommend?
Reply
Ali Maffucci says:
September 15, 2015 at 2:18 pm
Anita - definitely, I think it would be great! However, you'll need to add in a cooking fat - like olive oil, instead of bacon. Try 1.5-2 tablespoons when you cook the scallions!
Reply
Anita says:
September 15, 2015 at 4:41 pm
Lovely thank you :) I'll be back with a picture shortly! Tomorrow's lunch: zucchini noodles with tomato mascarpone sauce :)
Kerry says:
February 9, 2016 at 1:15 pm
This would be a great dish for a "breakfast for dinner" night! I'd add a dollop of sour cream or some really good shredded cheddar cheese.
Meaghan says:
February 9, 2016 at 2:42 pm
Sounds fabulous, Kerry! Great idea.
Erin @ Her Heartland Soul says:
September 15, 2015 at 5:44 pm
Sending this recipe to my husband! Thank you! Her Heartland Soul http://herheartlandsoul.com
Reply
Katie says:
September 15, 2015 at 6:58 pm
This recipe definitely has some great possibilities! I sometimes like to make a egg Florentine quesadilla for breakfast, with an over-easy egg, creamed spinach, and a little Parmesan in a tortilla shell. I bet this hashbrown would make a very tasty bottom - and no tortilla shell! Thanks!
Reply
Melisa says:
September 15, 2015 at 8:29 pm
Made it tonight, with red onions and olive oil, great recipe and very versatile!!!! Definitely will be a regular on my dinner rotation.
Reply
Tara says:
September 16, 2015 at 11:04 pm
to get it to flip easier, try a Scan Pan! It will change the way your food comes out. I own one small one (9 inch) and its and investment ($80-100) but it seriously is amazing for flipping hash cakes, eggs etc. hope this helps :)
Reply
Deborah B says:
September 17, 2015 at 1:39 pm
Ali I just made this with Sweet Potato and it was soooo good! Thanks for all you do, you are amazing. Didnt change anything but subbed the potato, and put a tiny bit of organic maple syrup on at the table (about 2 tsp). It was so wonderful! I love my spiralizer and I read your site every single day.
Reply
Pingback: 60 Best Whole30 Paleo Recipes of All-Time | Paleo Grubs
Pingback: 60 Best Whole30 Paleo Recipes of All-Time - Your Herbal Health Shop
Pingback: 60 Best Whole30 Paleo Recipes of All-Time | PaleoRecipe24.Com
plasterer bristol says:
May 31, 2016 at 12:42 pm
Sounds delcious. great recipe. Thanks for sharing. Simon
Reply