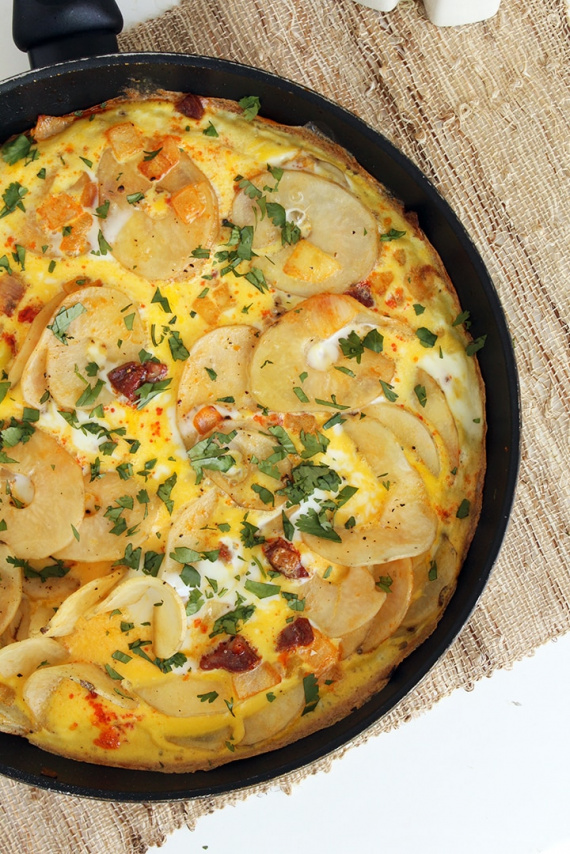 Recipe by Vegetables, Gluten Free, Breakfast, White Potato
The Internet is really a beautiful thing. People living all over the world, from Australia...
jump to recipe
share this recipe 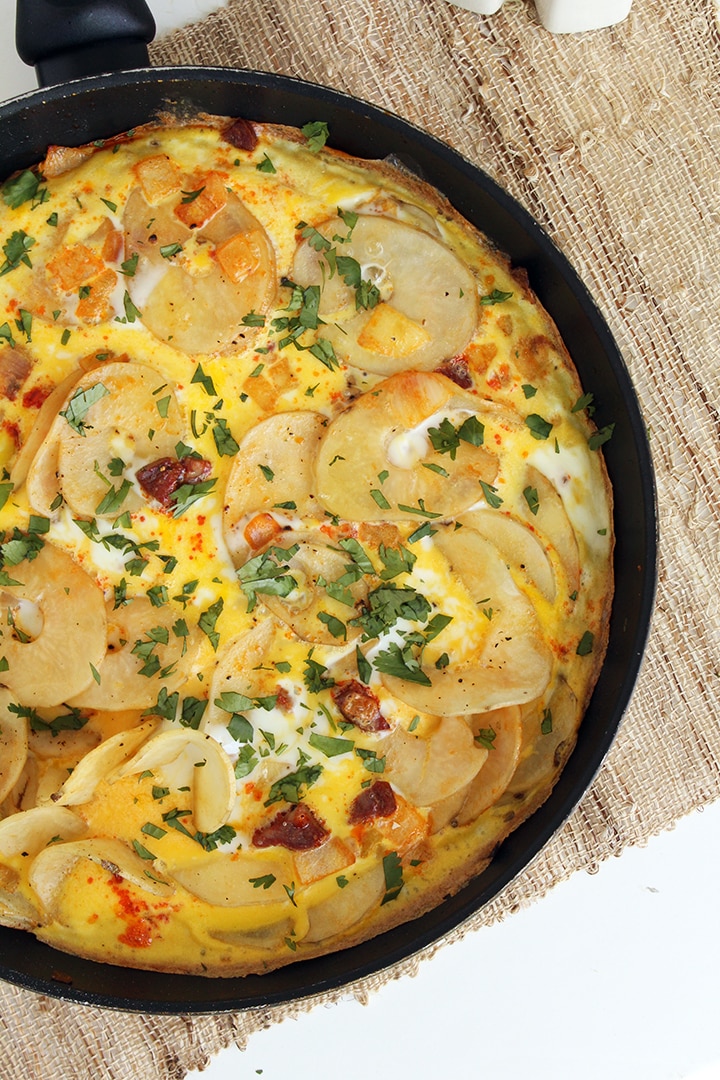 The Internet is really a beautiful thing. People living all over the world, from Australia to Florida are brought together through the ‘net. Every day, I’m humbled and amazed by how far-reaching the spiralizing movement has become.

Whether I receive an e-mail from someone in Australia, California, London or even good ‘ole New Jersey, I’m in awe. It makes me so happy that people have adopted the spiralizer into their homes and are “cleaning up” their diets with healthier meals.

Imagine my happy surprise when a Williams Sonoma manager in Frisco, Texas e-mailed me and told me they’ve been following my blog and recommending Inspiralized to all their spiralizer customers! 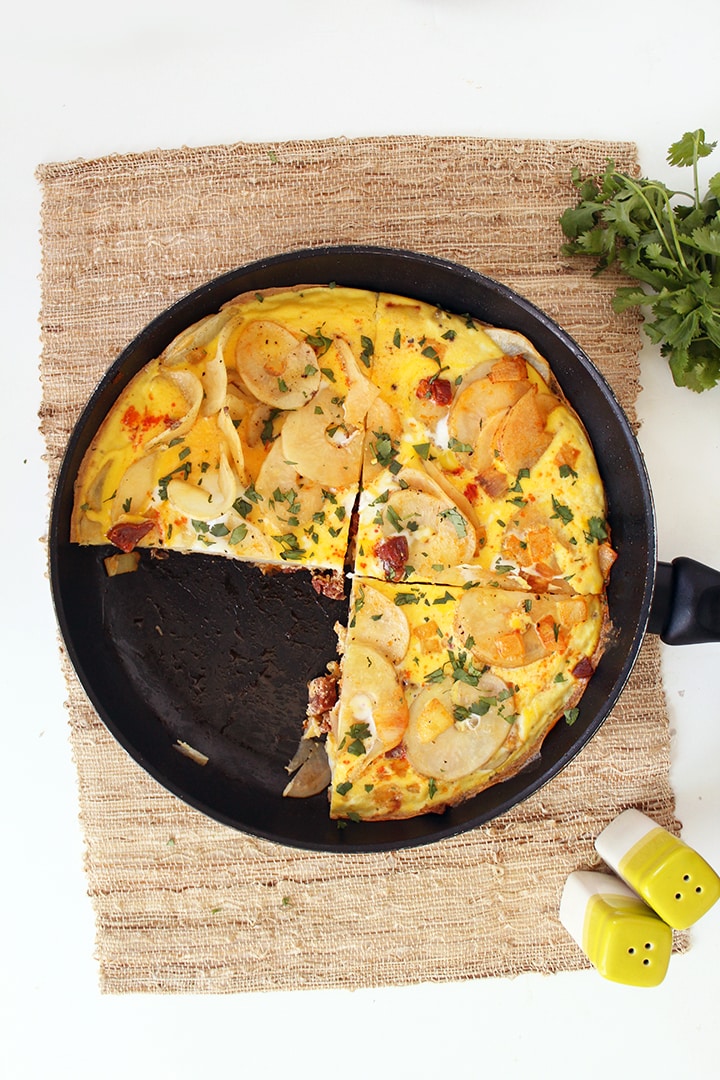 Totally awesome! This manager from Texas sent over a recipe that their store’s chef Tessas developed. The recipe was for a brunch menu using the spiralizer. It was a “Tortilla Espanola.”

This chef was from Mexico City, so her recipe was certainly authentic- onions, potatoes and eggs. While I didn’t use her exact recipe here on the blog (I received some Imperial Chorizo in the mail and just HAD to use it), this dish is inspired by that e-mail.

The Williams Sonoma store manager even sent some pictures over. Totally drool-worthy, right? 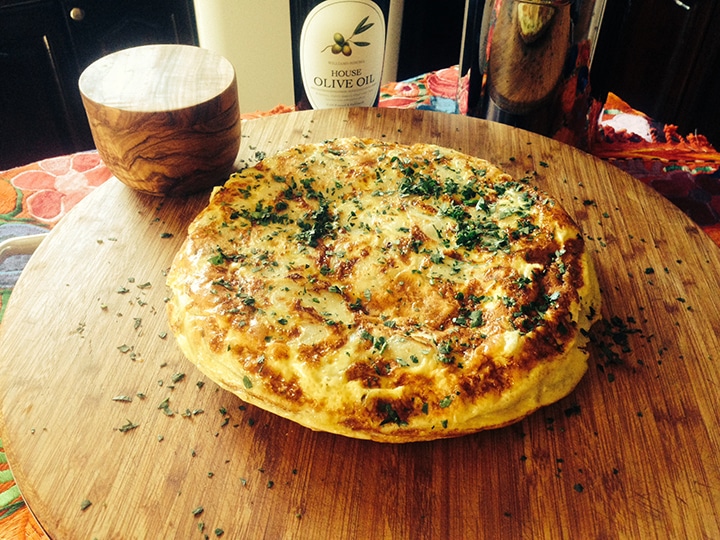 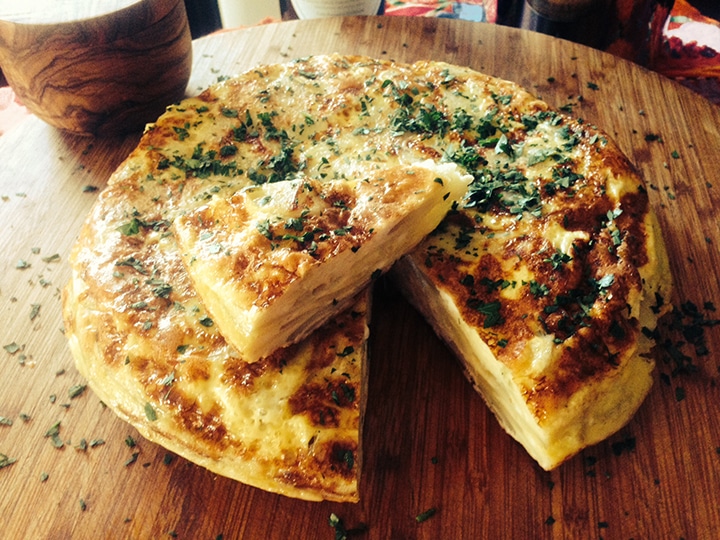 What I love most about this Tortilla Espanola is that it’s thick – just like it should be.

My recipe is a bit lighter, with less layers of potato (therefore less potato, less calories and less carbs). The spicy chorizo gives this Spanish omelette a beautiful savory and salty flavor.

Actually, Lu’s mother served a “tortilla” the first time I met her. It was gorgeous, fluffy and enhanced with some extra flavorings – she’s Colombian, so who knows what was in there – but it was sure tasty. 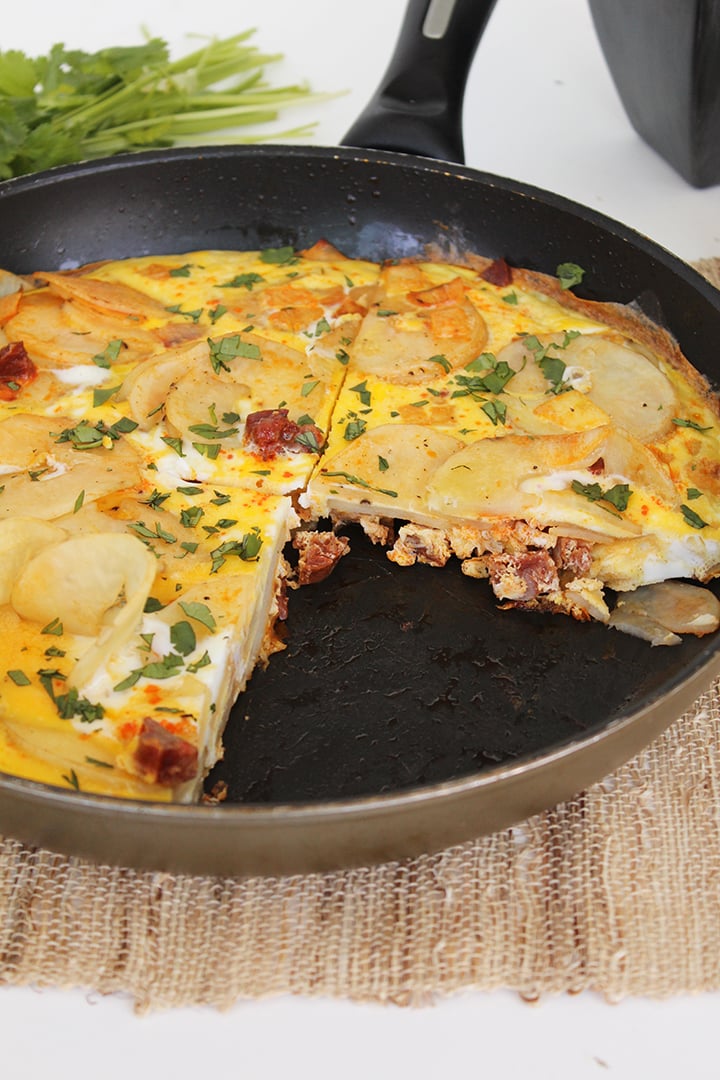 This recipe makes four big triangular pieces OR you can cut it into 8 individual pieces. If you cut it into eighths, serve it alongside a salad or some crusty bread. 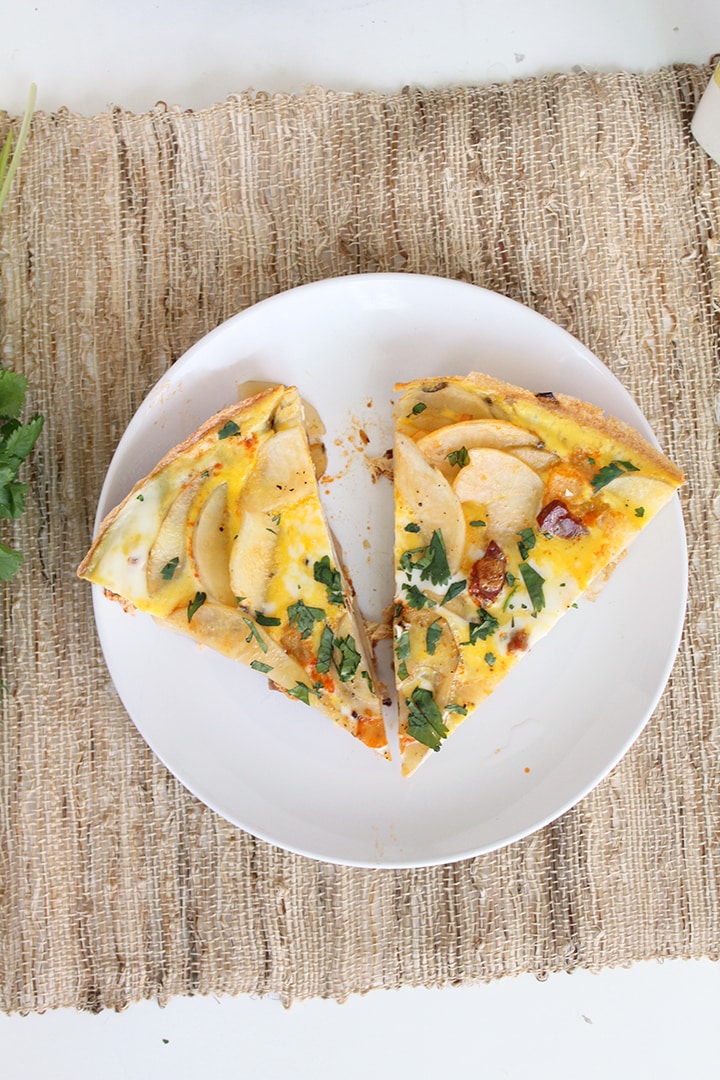 Truth be told, I made this over the weekend and placed it right in the freezer. I defrosted and warmed it up a couple days later and it was just as luscious.

The spicy chorizo makes this omelette suitable for “breakfast for dinner” – just grab a glass of Spanish red and make a side vegetable and voila – an exotic and easy meal!

Also, might I add, it’s an impressive looking dish with the curly potatoes sticking out at the top. Can a mandolin do that? I think not! #spiralizerforthewin

Thanks again to Williams Sonoma in Frisco, Texas for the original inspiration!

What do you think of adding chorizo to this traditional Spanish dish? 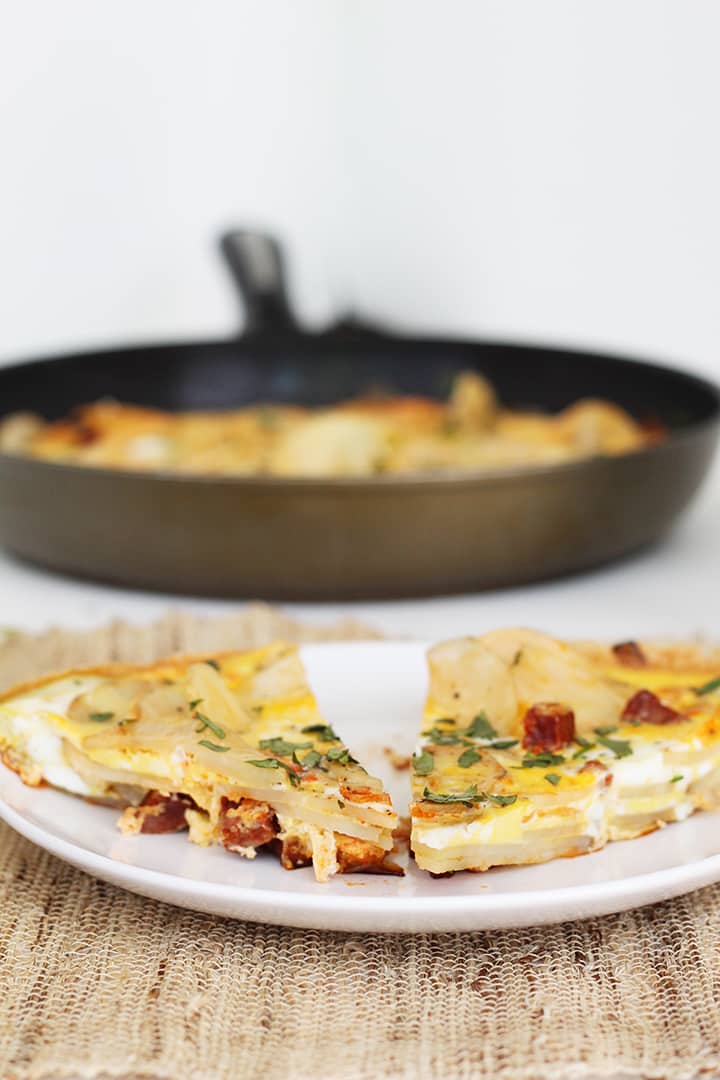 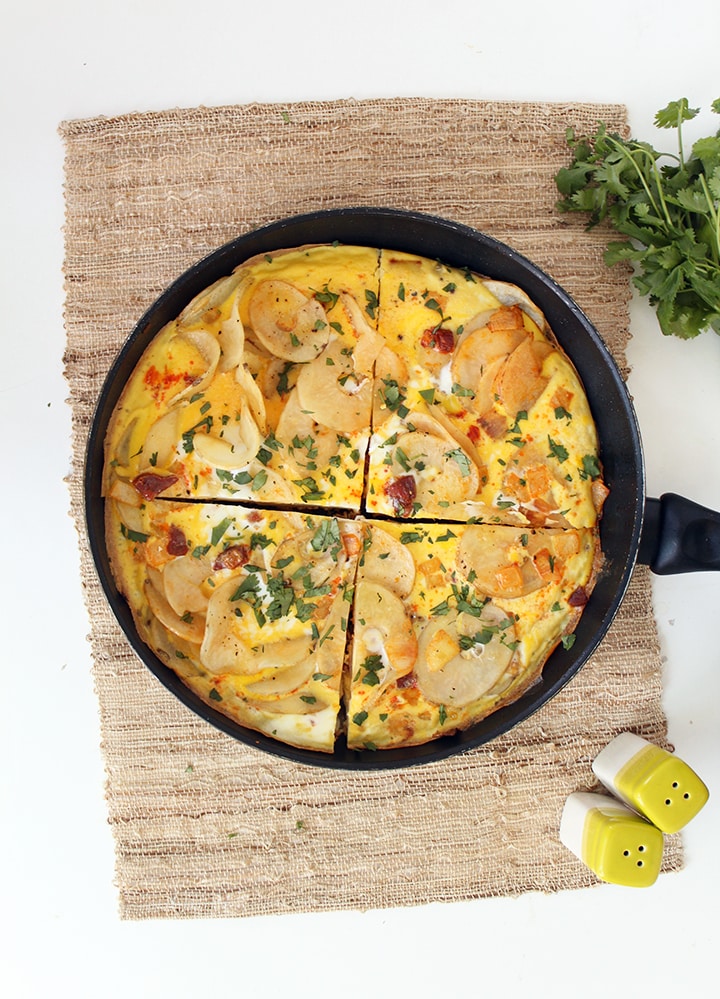 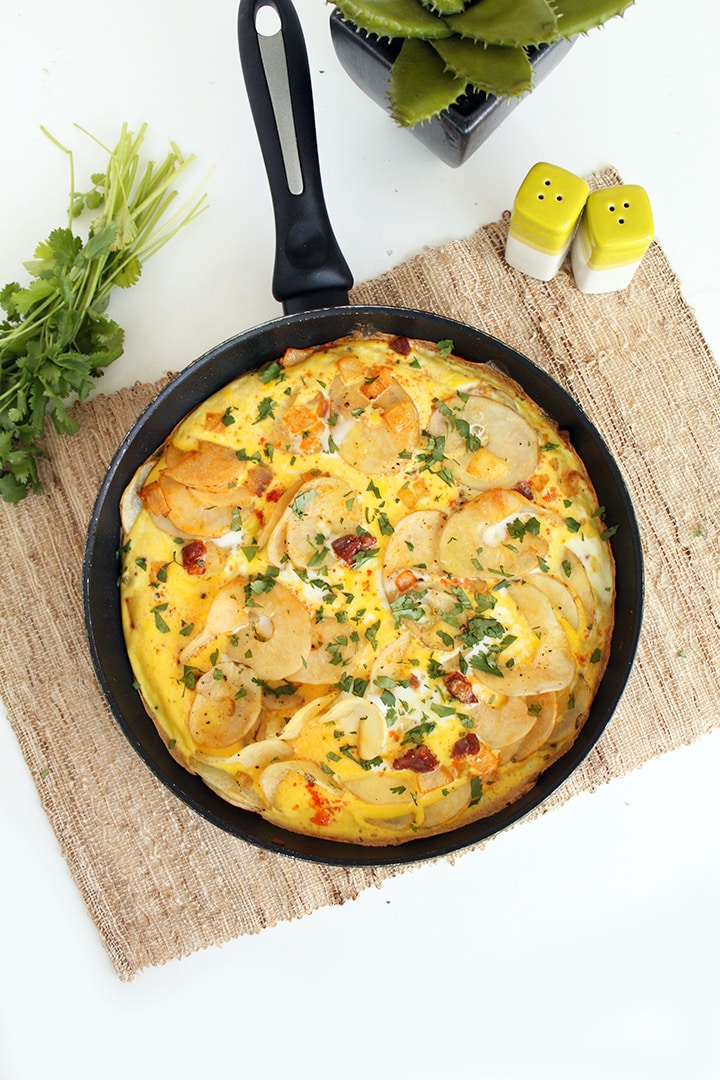 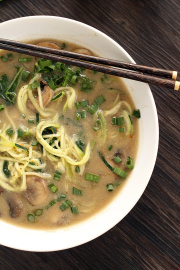