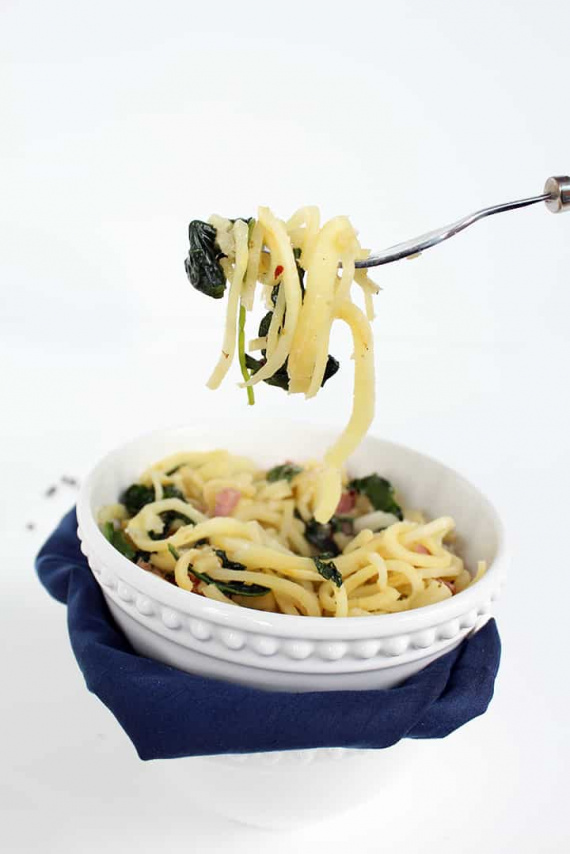 Recipe by Vegetables, Gluten Free, Meat & Poultry, Pasta, Parsnip
I know what you’re thinking: she used real spaghetti in this picture and is calling...
jump to recipe
share this recipe 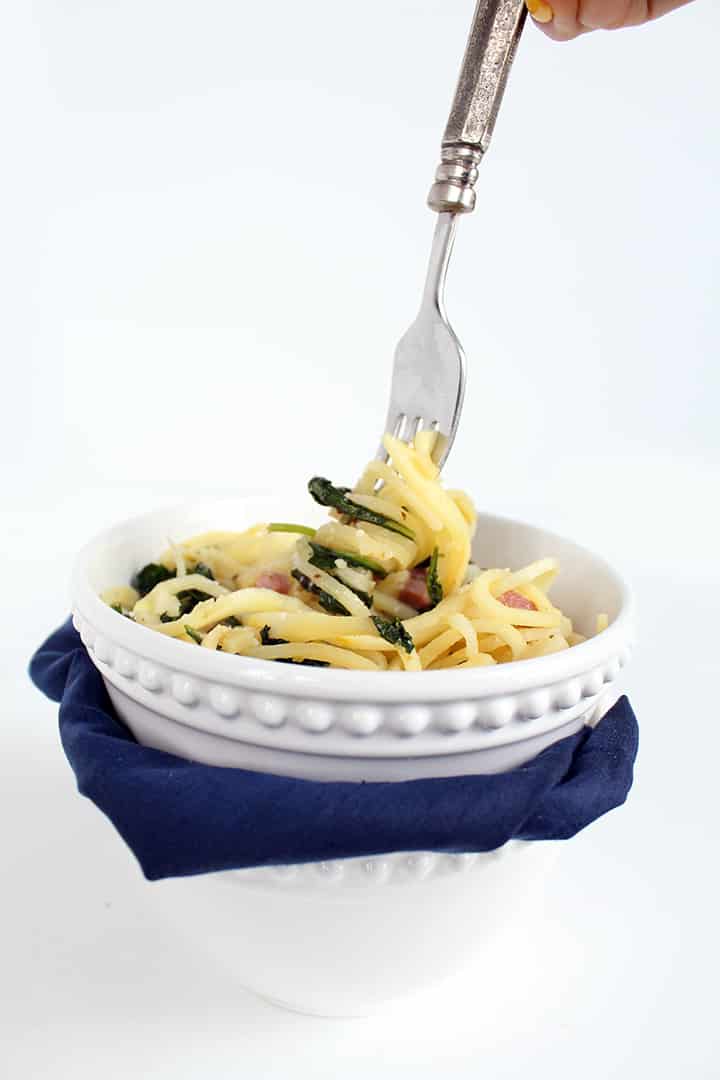 I know what you’re thinking: she used real spaghetti in this picture and is calling it parsnip noodles.

Well, I’m here to tell you that these are actually parsnip noodles. The key to such perfect spirals? Find the largest parsnip possible and once you do, peel it and spiralize it, adding a lot of pressure to get even noodles.

This recipe is actually inspired by my Garlic Sweet Potato Noodles with Pancetta and Baby Spinach which has apparently been making it onto many of your dining tables this past week. Instead of reinventing the wheel, I’ve made some slight adjustments for a similar idea, but a whole new scrumptious flavor. 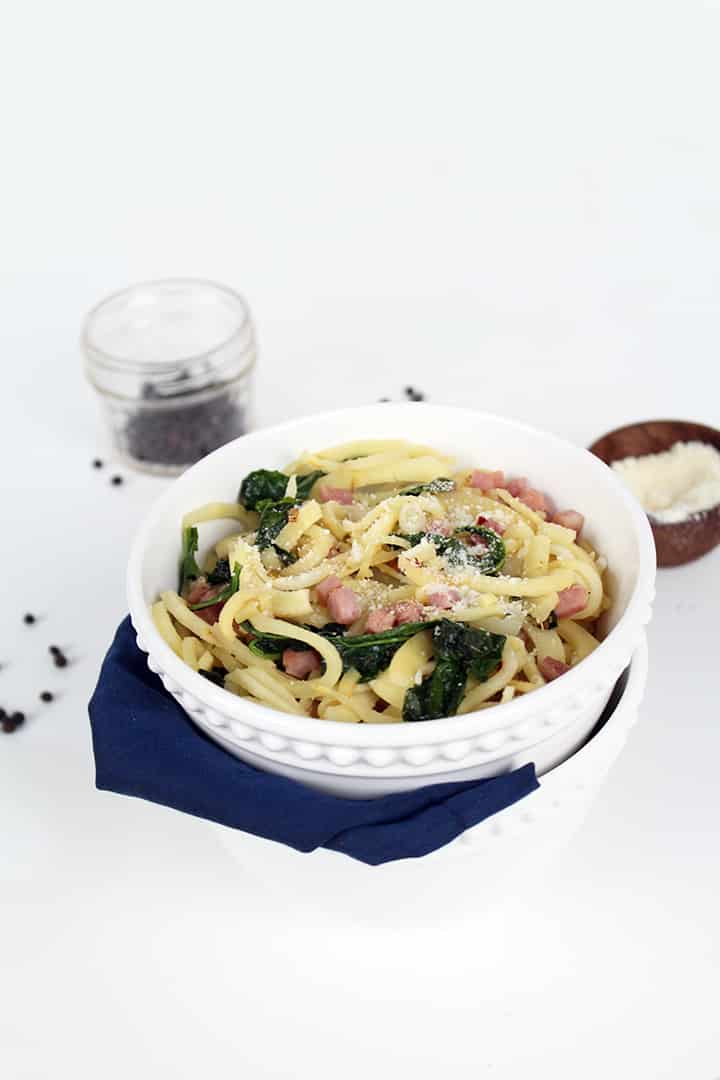 Last Saturday, Lu and I were roaming around Jersey City on our bikes and stopped at a farmer’s market that we didn’t know had already opened. I can’t tell you how giddy I get when the farmer’s markets open up in our neighborhood.

Then, I spotted them. The most monstrous parsnips. They measured 2.75 inches in diameter! I know I’m geeking out right now, but spiralizing small vegetables, as you may already know, is difficult. Therefore, when I spot a large version of a typically small vegetable, I get excited.

I obviously bought a bunch (including a few giant carrots) and didn’t do anything with them until the end of the week. I had leftover ham from some cookbook recipe testing and a bunch of ramps that I ordered on a whim on FreshDirect. Since “the weekend = no cooking,” I decided to clean out the fridge and make this pasta dish. 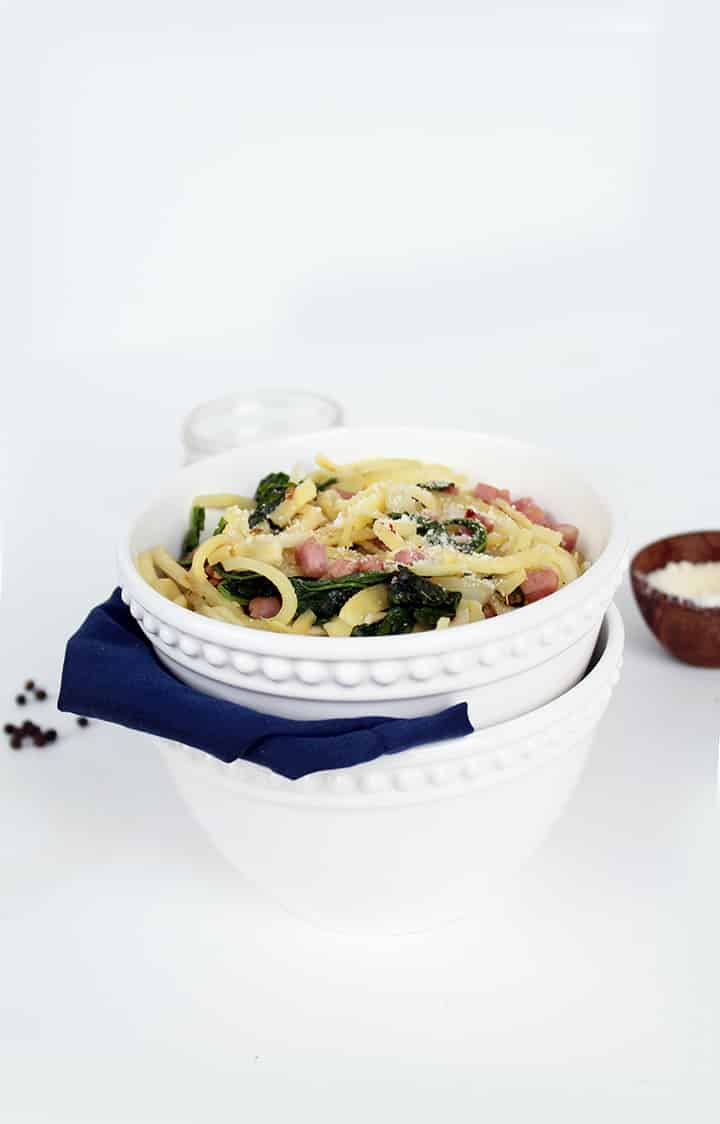 Oh, and the baby kale – I asked Lu to pick me up kale one night on his way home from work and that’s “all he could find.” But that’s alright because a) I love him and b) baby kale is cute and more manageable.

That’s a long story on how I arrived at this recipe, but I’m glad it happened the way it did.

Parsnip noodles have a very distinct taste, unlike zucchini noodles (which I find are plain, making them ideal for turning into big, luscious bowls of pasta!). That beign said, if you don’t like parsnips, you may want to give this dish a try. 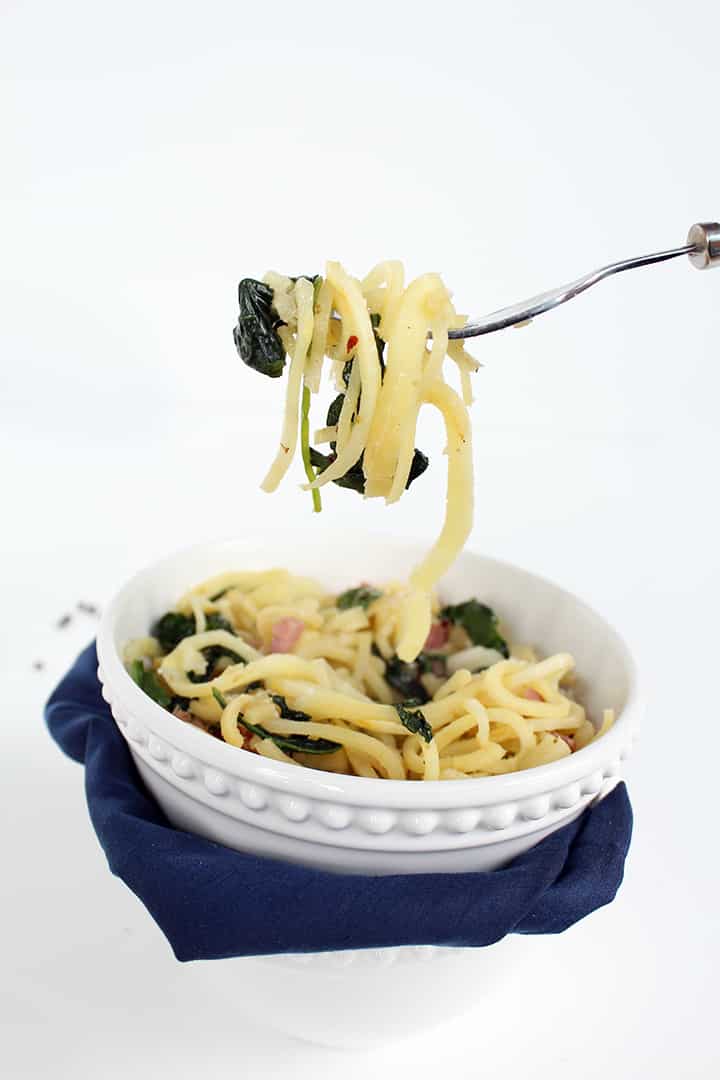 By spiralizing a parsnip, the taste isn’t as strong, but it’s still distinct. The warmth of the ham and the onion-garlic taste of the spring ramps gives the parsnips a luxurious, buttery taste (without the butter, of course!)

Why the kale? Not only did I want to use it before it expired, but because I like to get in my greens any way I can and the kale here is strong enough to soak up the flavors of the other ingredients and offer a savory taste and silky texture to the bowl of noodles.

I finished the pasta off with a couple teaspoons of parmesan, but if you’re Paleo or dairy averse, skip it. But, if you can keep it, keep it. The cheese is the total cherry on top in this situation and adds more depth to the meal. 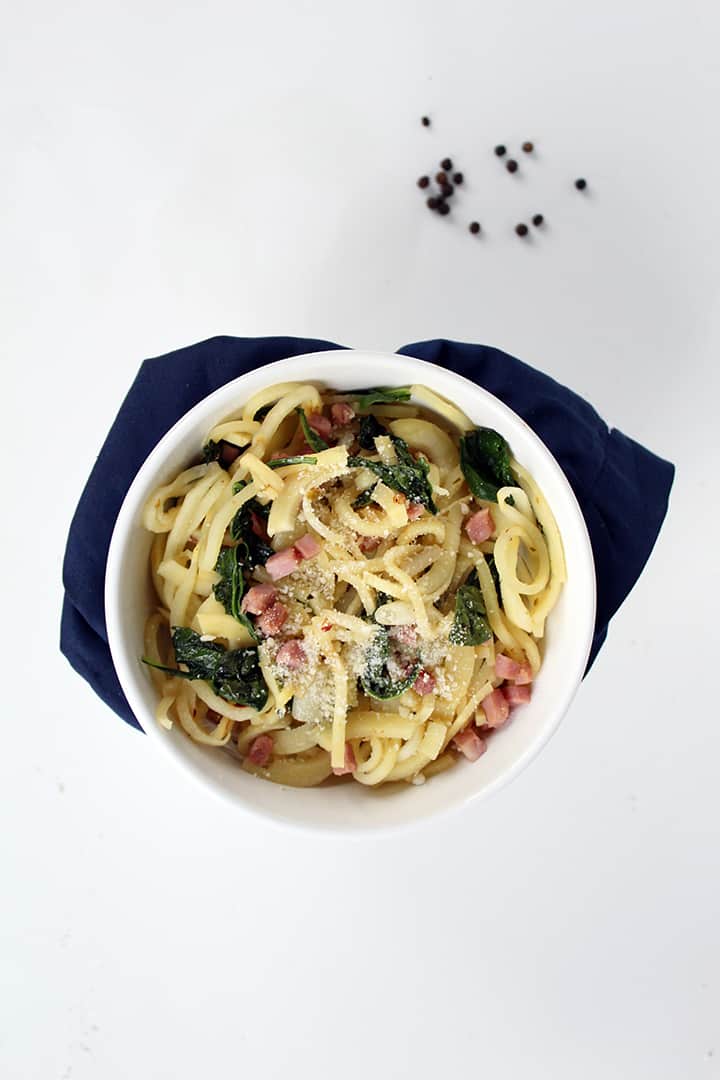 Based on the success of this pasta, I can’t wait to pick up more veggies this weekend at my local farmer’s market here in the JC. You know, this JC.

How do you feel about parsnips? 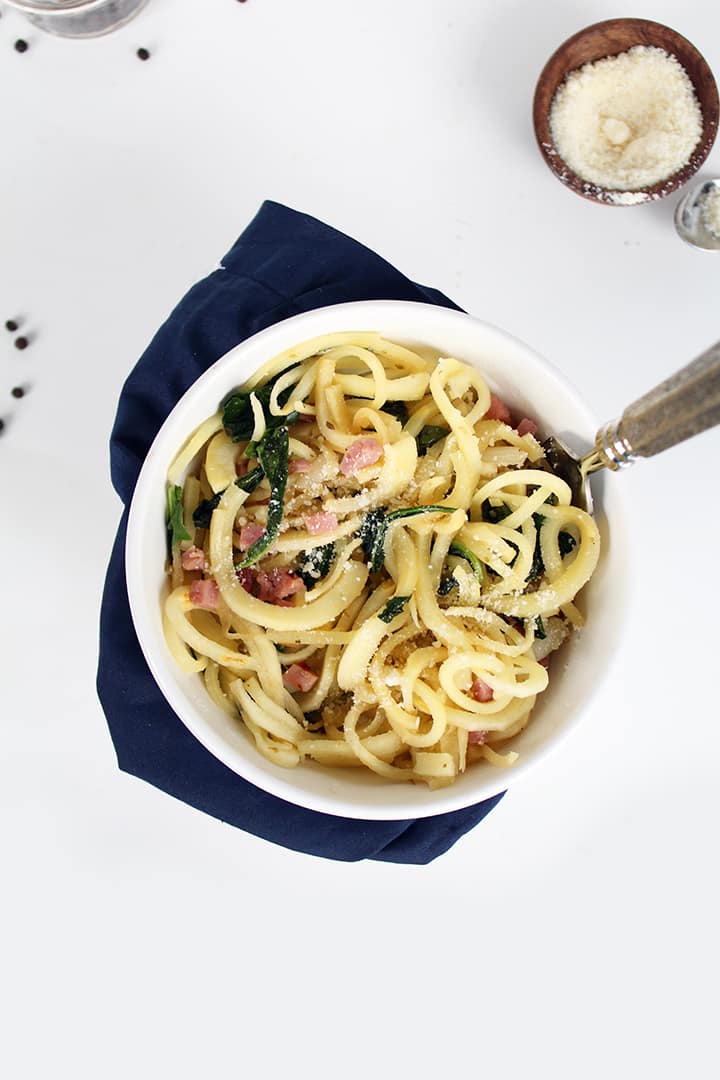 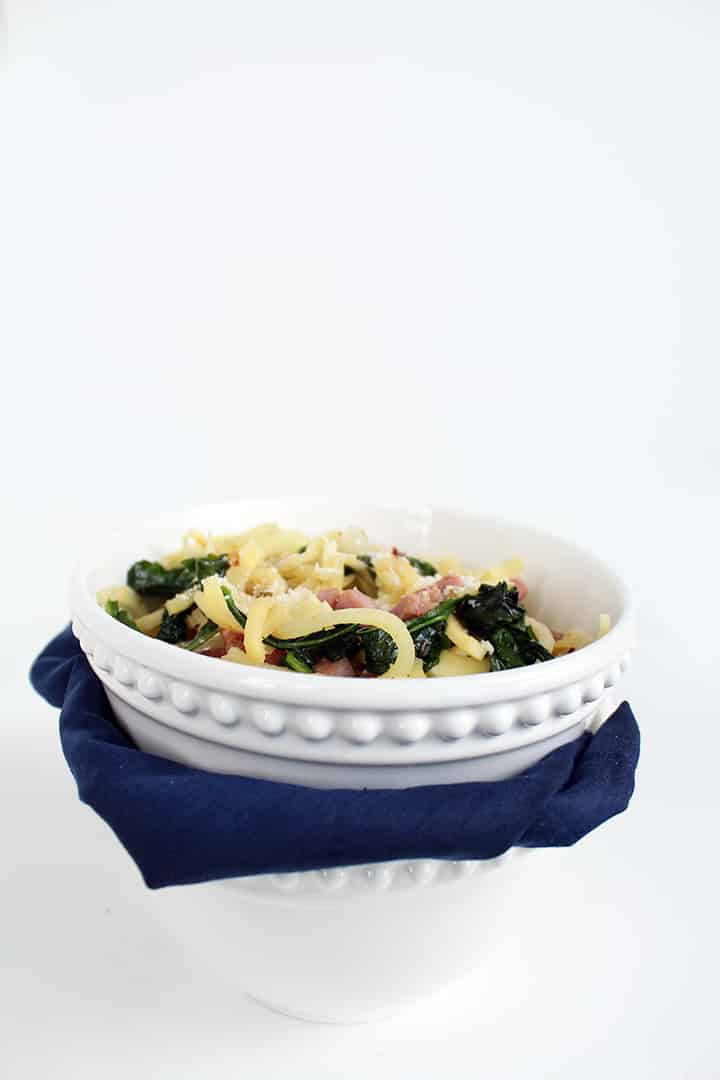 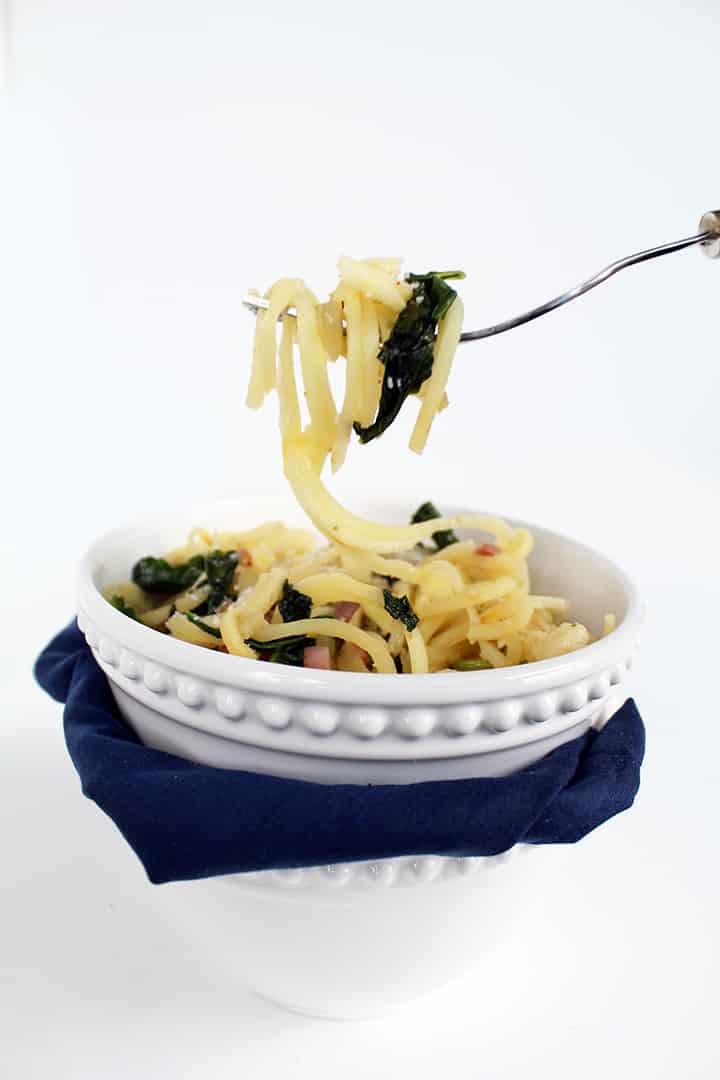 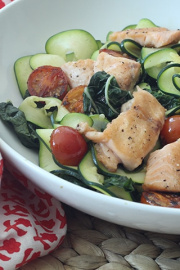