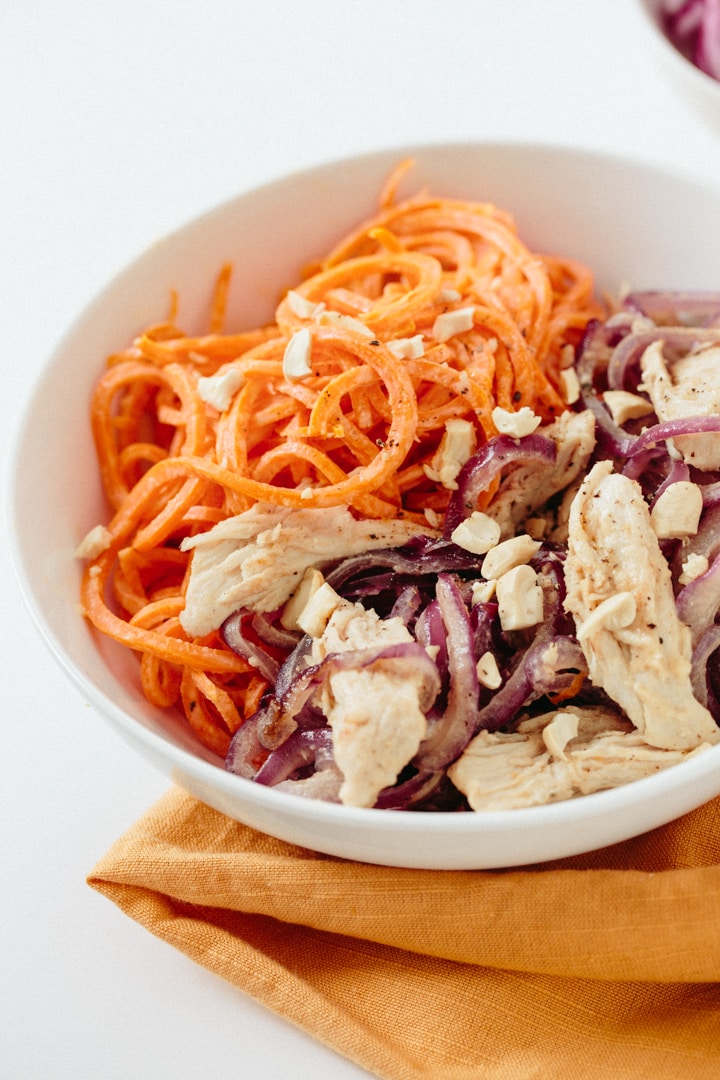 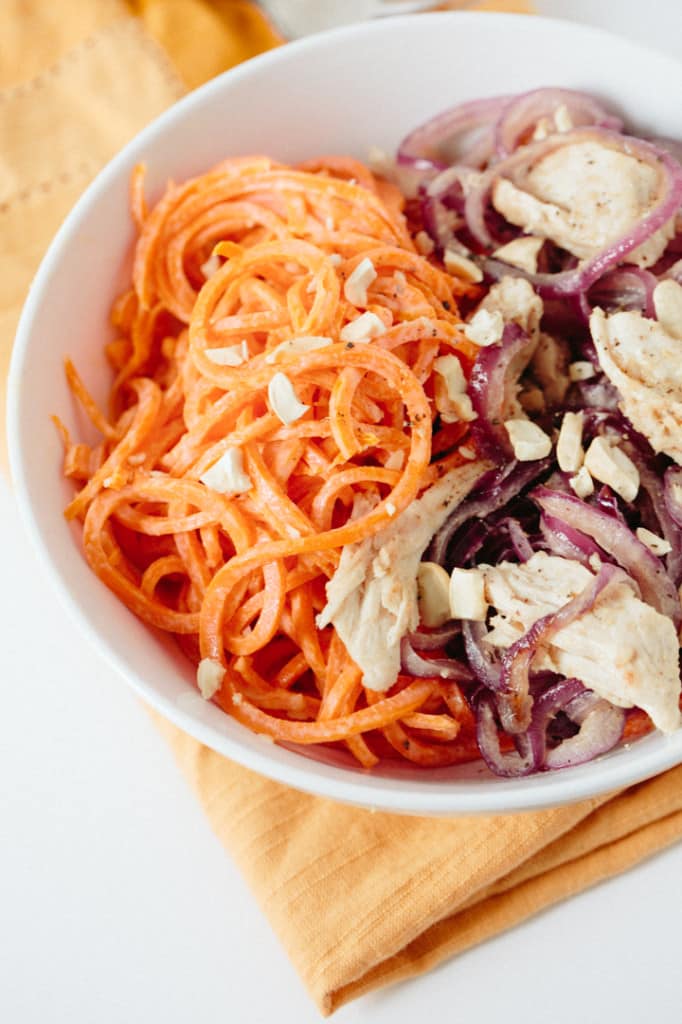 You can slather anything with tahini and it will taste great – that’s my new motto.

I mean, tahini is part of the world’s greatest spread (hummus), so no wonder it’s the best.

Who knew carrots and a little tahini dressing could be so satisfyingly delicious! 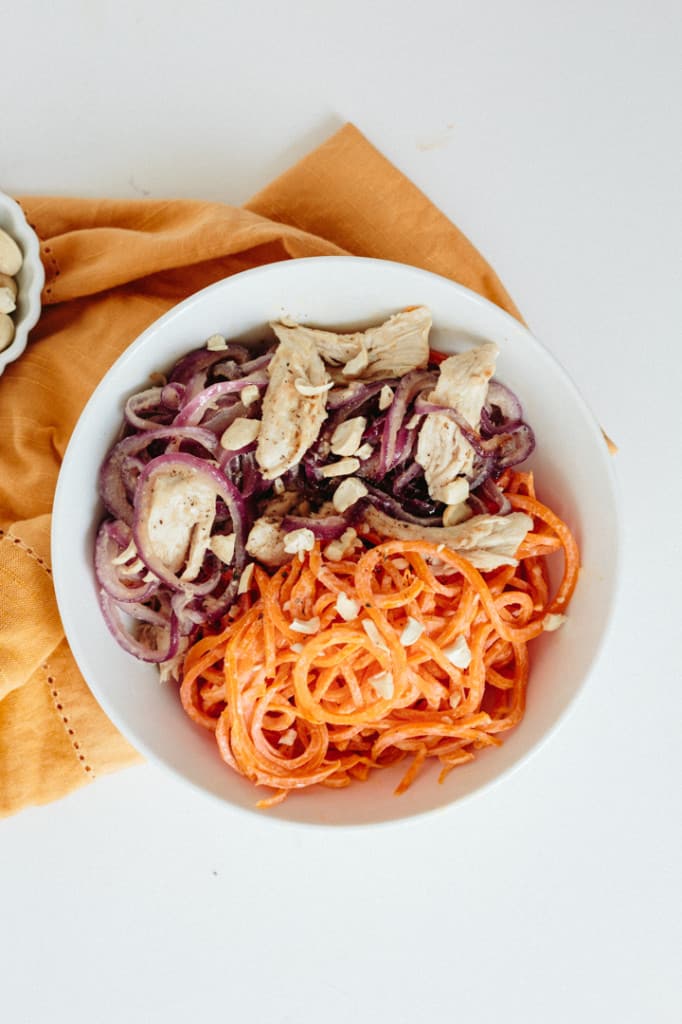 Making tahini dressing is crazy simple – you pulse tahini, water, garlic, lemon juice, honey, and olive oil together in a food processor until creamy. That’s it. If I were you, I’d triple the dressing recipe and keep on hand for dinners later in the week – it goes with seafood, meat, poultry and of course, veggies.

As you know, boiling carrots is my favorite way to prepare spiralized carrots – they fluff up and taste like whole wheat pasta, with a slight sweetness that works phenomenally with the tahini dressing (picking up hints of honey.) 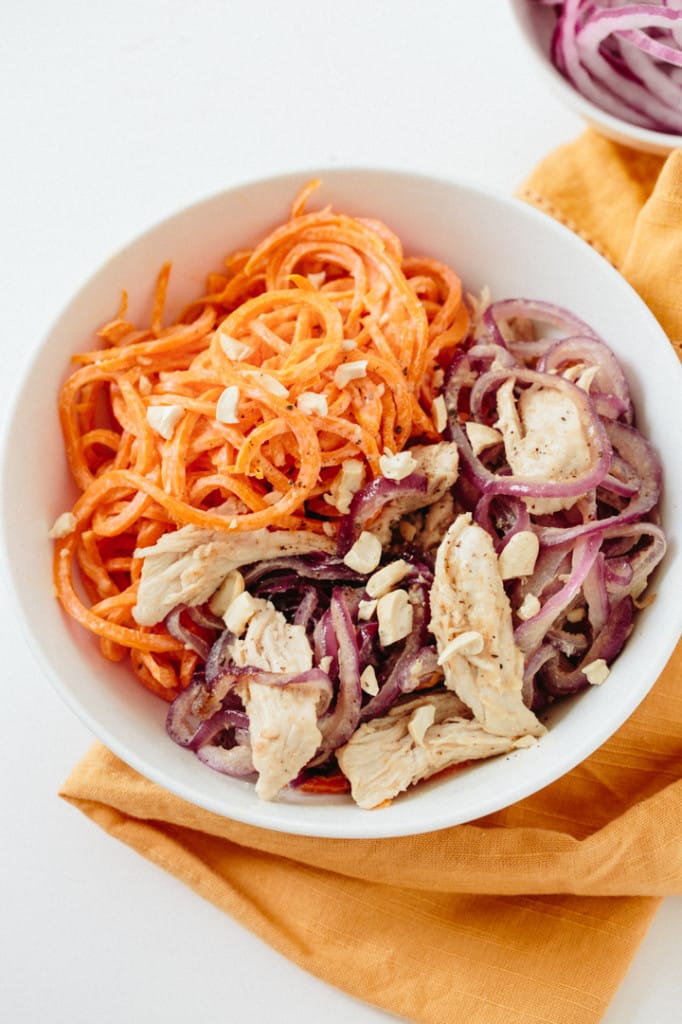 Another essential to this recipe is the onion. These spiralized onions caramelize beautifully with a simple salt and pepper seasoning and give the chicken an added savory flavor. Caramelized onions also give a nice velvety texture, bringing this pasta dish together.

I’ve never cooked chicken this way on my blog before – boiling it in water and then shredding it. Actually, I’ve never cooked it this way in “real life,” but now, it’s becoming my favorite way to do so – it’s quick, it’s simple and it results in succulent chicken. Chicken can easily dry out, but this method avoids that. 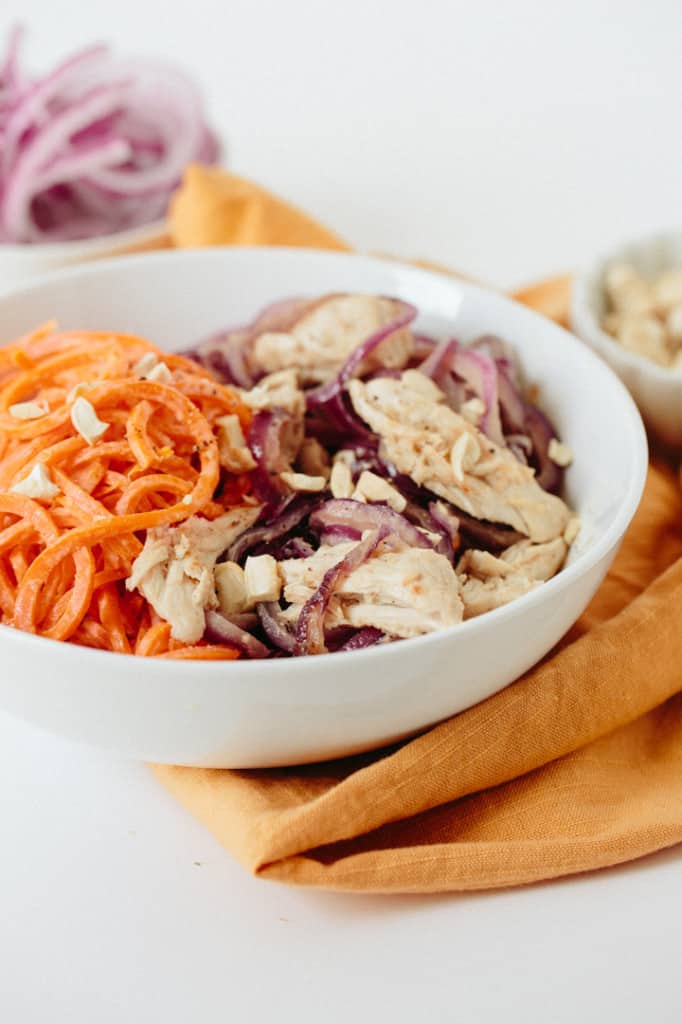 PLUS, who doesn’t love a little shredded chicken atop a bed of greens, pasta, in a sandwich, or even in an omelette?

Spoiler alert: tomorrow’s recipe is going to use extra shredded chicken from today’s recipe (because, hey, I don’t want to waste!) 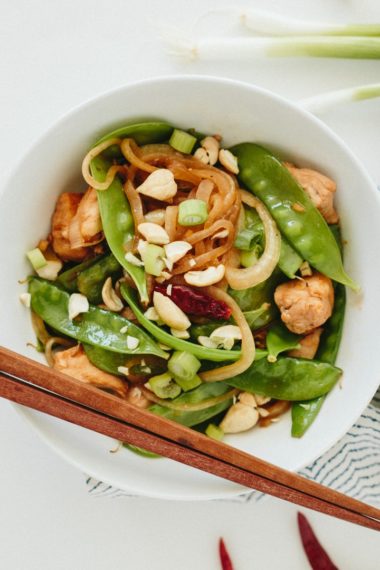 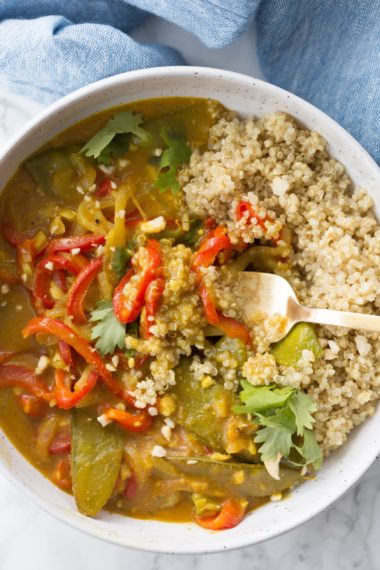 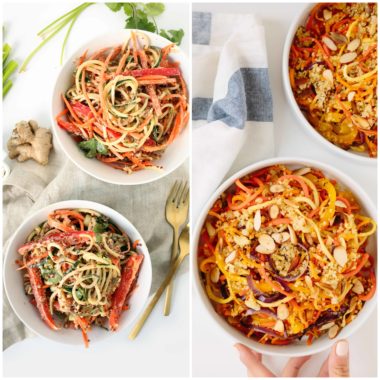 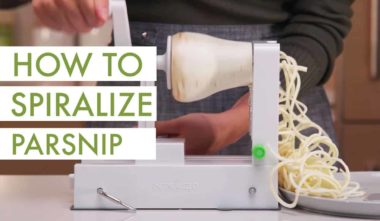 How to Spiralize Parsnip (video)

Kim V says:
July 21, 2015 at 9:21 am
This looks yummy, Ali, but I need your help. I've never been able to find a tahini that I really loved and ended up just adding toasted sesame oil to recipes as a substitute. Do you have a favorite that you could recommend?
Reply
Anonymous says:
July 21, 2015 at 11:28 am
Not Ali here, but just want to say that tahini is very easy to make yourself with a food processor. Just as peanut butter is made with peanuts, tahini is made with sesame seeds. http://www.food.com/recipe/homemade-tahini-73859
Reply
Erin @ Her Heartland Soul says:
July 21, 2015 at 10:40 am
Oh yum! I LOVE tahini!
Reply
Karen says:
July 21, 2015 at 11:23 am
Ali, from the photo, it appears that the onion you used is a red onion. Am I correct in assuming that that's your intention for this recipe? Certainly, the red would complement the hint of sweet you mention in the carrots and tahini-dressing mixture. I'll be trying this dish for sure!
Reply
Ashley | the Pike Place Kitchen says:
July 21, 2015 at 9:14 pm
This looks SO good! I've never boiled my chicken either, i'll have to try it!
Reply
Peg Adams says:
July 21, 2015 at 11:11 pm
Ali I have been cooking chicken this way for years--when Martha Stewart still had her Everyday Food magazine I saw it in there. I cook it in a pan that has half water and half Imagine brand low sodium free range chicken broth. I love the taste of the broth....very chicken-y ! I freeze the broth for later after removing the cooked chicken. I use the broth in Chicken Marsala, homemade chicken noodle soup, a Stir Fry or whatever I need it for. Yum and thanks for this recipe!
Reply
Saturday Shares - Her Heartland Soul says:
July 25, 2015 at 1:26 am
[…] Tahini Chicken and Carrot Noodle Bowl <— I have a feeling this is going to become a staple lunch for […]
Reply
richard says:
July 26, 2015 at 4:17 pm
While the result was delicious, I used blade D on your spirializer but only got thin chips no noodles. Cooking the chicken with this method is a poor man's sous vide. Heat the water to 170, put the chicken in the pan and in roughly 15 minutes the chicken reaches 160, perfect for juicy and tender chicken. I just got your spirializer, getting rid of my old one, and am very happy. It holds to the counter unlike my previous one and the idea of no loose blades only rotating a knob is great. Looking forward to many more.
Reply
Ruth Detroit Area says:
November 16, 2015 at 7:26 pm
hi - This recipe tuned out real good, even tho' I made a few changes. First, I cooked some pea pods and sliced mushrooms with the onions - no carrots. Then I added 1/2 of a med zucchini, inspiralized on blade C. (I used these vegetables because that's what I had on hand). I added the zoodles at the very end, hardly cooked them at all, which leads me to my next change. I'm more comfortable fixing one-pot meals and leaving it in the oven on 'low' because my DH is starving when he gets home from work. A bowl meal is nice on the weekends, but on work nights it's better if I have the meal ready-to-go. (He can't really tell what the traffic's going to be like, and it's better just to have this ready to put on the table). BTW - I remember my grandma telling me NEVER boil chicken, even in homemade chicken soup - keep it at a nice low simmer so it won't get tough! Thanks for another winner!
Reply
Pingback: June's Healthy Eats - Nourished Sweetly
Pingback: 15 Spiralized Meals That Make Great Lunch Leftovers | Inspiralized
Pingback: Meal Prep with Spiralized Vegetables | Inspiralized
toko komputer online says:
November 8, 2017 at 8:42 am
Thanks for sharing your thoughts about tahini. Regards
Reply
Meaghan says:
November 8, 2017 at 9:56 am
You're very welcome!! Thanks for reading.
Reply
Lakeisha says:
February 1, 2018 at 10:32 pm
I'd like to find out more? I'd like to find out more details.
Reply
Meaghan says:
February 5, 2018 at 3:50 pm
We're happy to assist! What can we help you find?
Reply
Pingback: Ground Rules: Storing Spiralized Vegetable Noodles - Inspiralized
Pingback: How to Store Zucchini Noodles and Spiralized Vegetables - Inspiralized