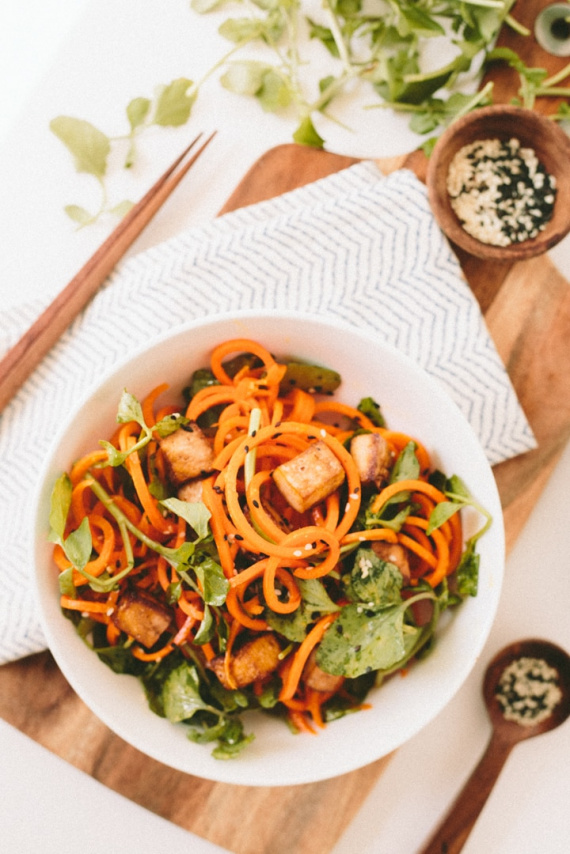 Dairy Free, Vegan, Vegetarian, Noodles, Carrot
When I first posted a picture of this dish on my Instagram, I captioned it...
jump to recipe
share this recipe 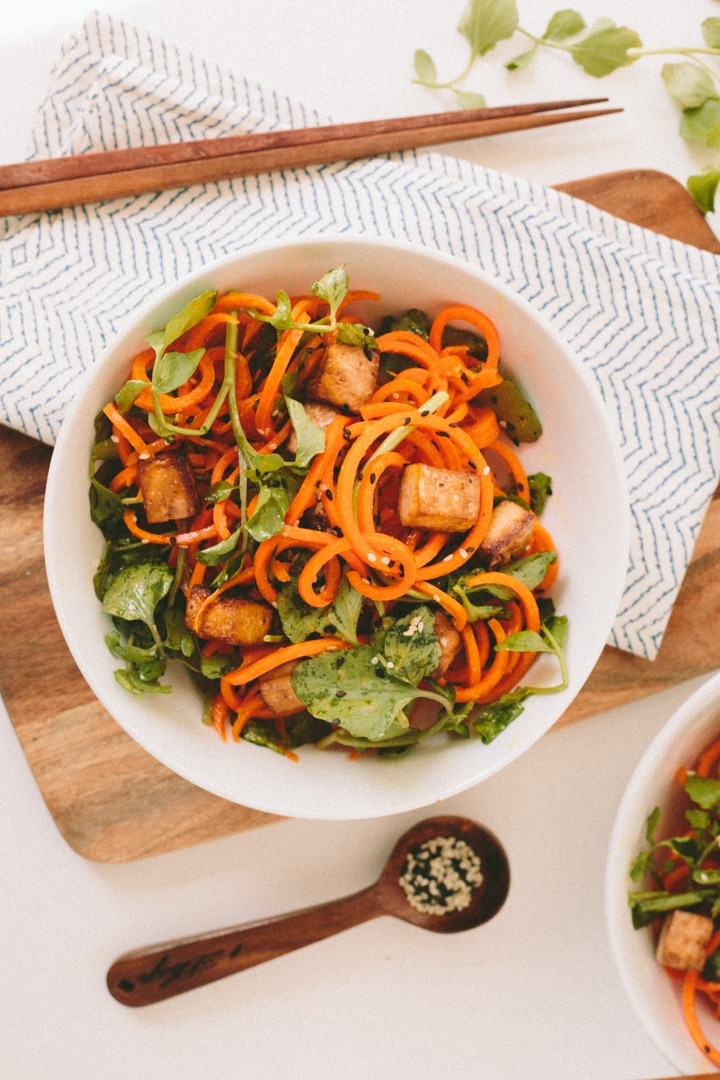 When I first posted a picture of this dish on my Instagram, I captioned it with: “meals that make me want to go back to being vegan.”

A few of you asked me why I’m no longer vegan.

So, I decided this post was a good one to address that question. 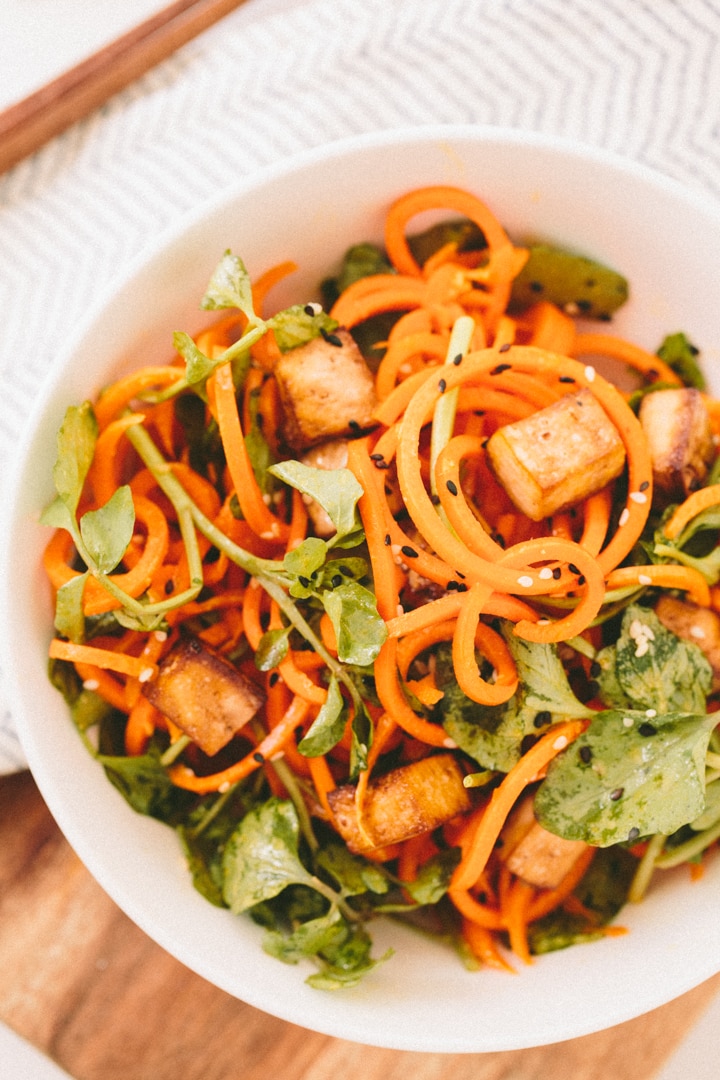 Why did I decide to stop eating a vegan diet?

For a few reasons, which I’m going to address below, but first, I want to preface everything by saying two things:

Now, on to my reasons for switching from vegan to omnivore. Keep in mind, I became a vegan at the end of the summer before my senior year of college. I had just come back from studying abroad in Europe and I had eaten my way through that continent – pastas and pizzas in Italy, fluffy curries in London and beef dumplings in Prague. I weighed nearly 190 pounds (the scale tipped to 190, but it hovered over 188. Phew.) 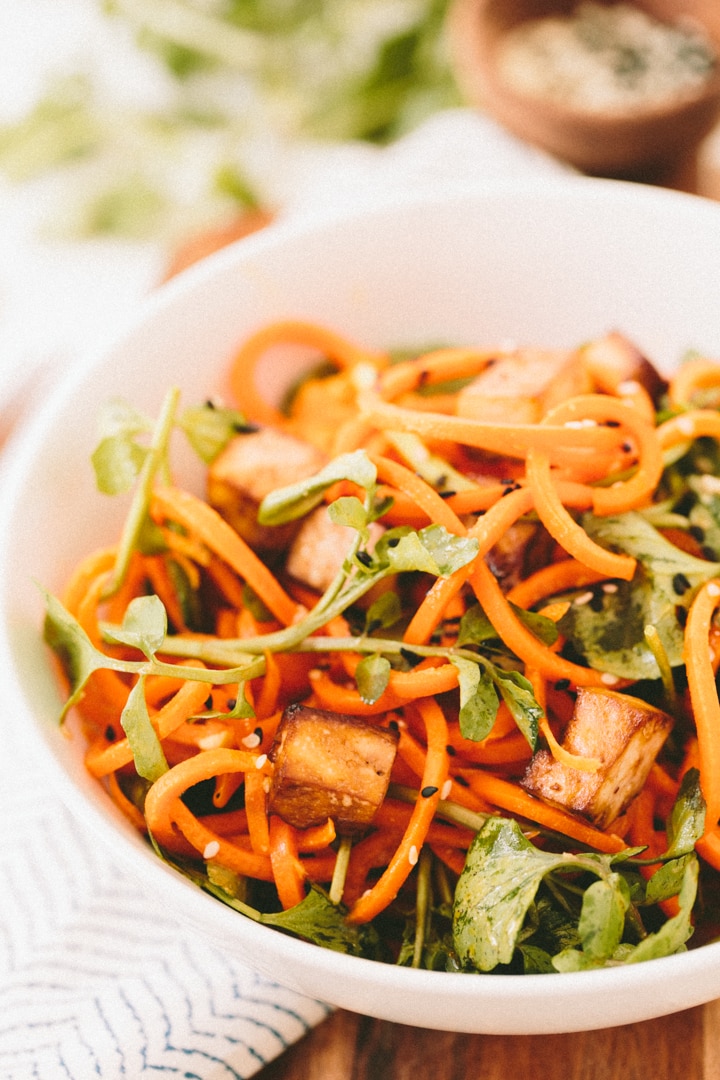 I was living in New York City, interning and was clueless about nutrition.

I was adopting that “eat as little as possible” mentality, as it seemed all girls in their early twenties were doing. I didn’t know what a “healthy fat” was or the importance of protein. I knew if it was green, it was probably good – and if it included bread or a carb, it was bad. Foolish.

This usually led to the feeling of being hungry all the time and led to binges (we all know the drill.) I’d drive home with my friends for a weekend to spend time with my parents (because they had a pool and pools are hard to come by in NYC) and I’d eat all the things. Everything. And I was never satisfied or felt good. I could never lose a pound because of the yo-yoing.

Then, my friend Sarah gave me a book about veganism. I read it all in one day – I was fascinated by what I learned. They say ignorance is bliss and it truly, truly was. I had no idea. I couldn’t believe what I had been subjecting my body to all those years. So, Sarah and I decided to “go vegan.”

So what happened after my two years as a vegan, which spanned from senior year of college to my first year in corporate America? Why did I make the choice to stop eating 100% vegan? 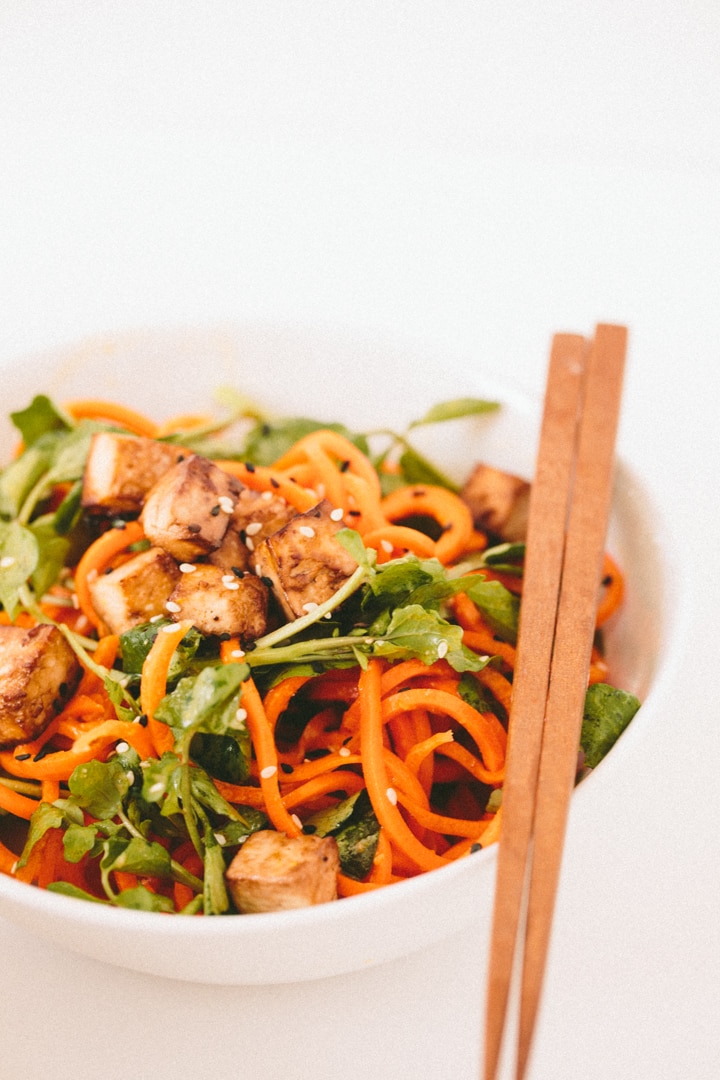 I went vegan during my senior year of college, when I wasn’t living in/around NYC, which has the most amazing restaurants, perhaps in the world (or close to it.) I was living in a medium sized city in North Carolina (during college) which didn’t exactly have world renowned chefs and cute tapas restaurants at every block. So, it was easier to make vegan choices, when you weren’t being lured by the glamorous sights and sounds of NYC’s Michelin-starred restaurants.

Going out to a sushi spot in Winston Salem, it was easy to ask for an avocado-cucumber roll with brown rice, because, frankly, the alternatives weren’t necessarily much more appealing. In short, once I moved back to the NYC area, I was sick of going out to restaurants and ordering off the sides menu and still being starving afterwards. I wasn’t nourishing myself, just for the sake of “sticking” to my veganism! I wanted to have a whole branzino at that romantic Italian spot in the West Village instead of just the side of broccoli rabe, no parmesan and a slice of bread. (Side note: if I had vegan friends, it would’ve probably been a lot easier to maintain veganism, but the men I dated and the friends I had were far from vegan.)

Also, I realized, towards the end of my veganism, I was being vegan for the wrong reasons. I wanted to “prove” to myself that I could be a vegan. Also, while a vegan, I hit my lowest at 127 pounds in December of 2008. I became obsessed with making vegan choices and working out. I worked out for 2 hours a day, every day and would say no to dinner plans with friends in exchange for a tofu stir fry at home. It became a prohibitive lifestyle, instead of a healthy lifestyle. 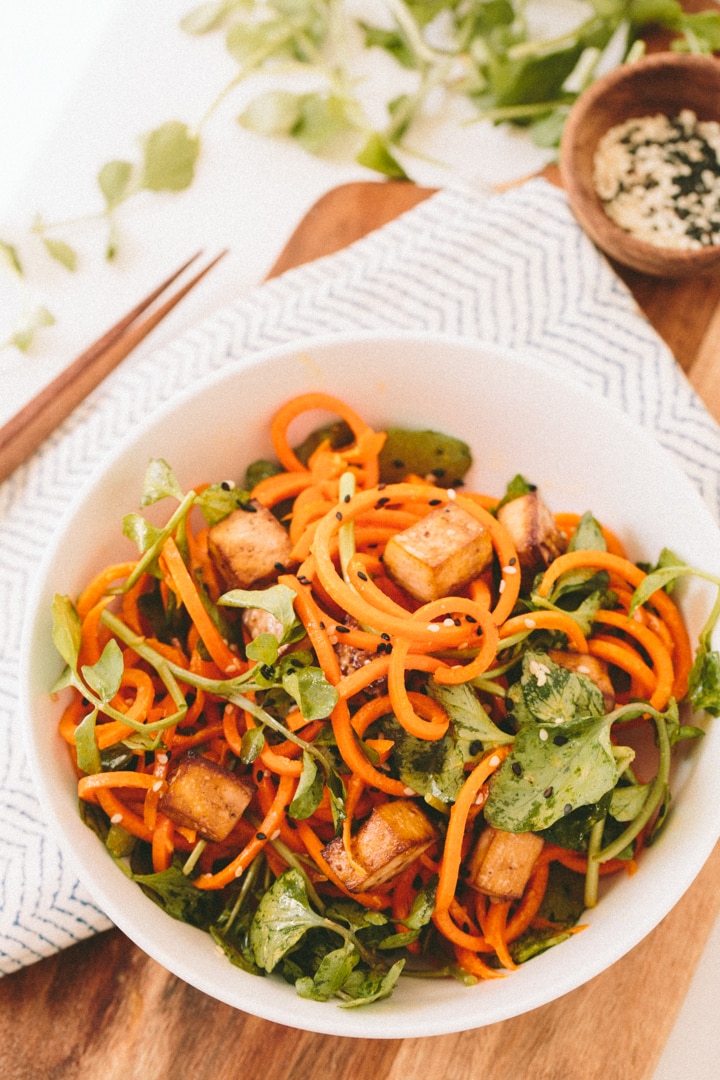 In the end, I learned that consuming animal protein can be part of a healthy, well-balanced diet, in moderation. I still believe in a primarily plant-based diet (and spiralizing makes that lifestyle choice SO much more enjoyable), but I don’t think twice about eating the “Chicken Under a Brick” at Marc Forgione’s restaurant or his chili lobster with Texas toast.

Sure, I wake up feeling super thirsty and a little tired, but I combat it with clean eating the next day and I savor every moment spent enjoying delicious food with the ones who I love the most.

Also, there’s a whole environmental aspect that comes with veganism. It takes an absurd amount of water, for example, to run a livestock farm. Plants are more sustainable. I completely agree with that and that’s been the hardest part with not subscribing to a vegan lifestyle. However, I’ve amended my life to be more sustainable by doing things like, 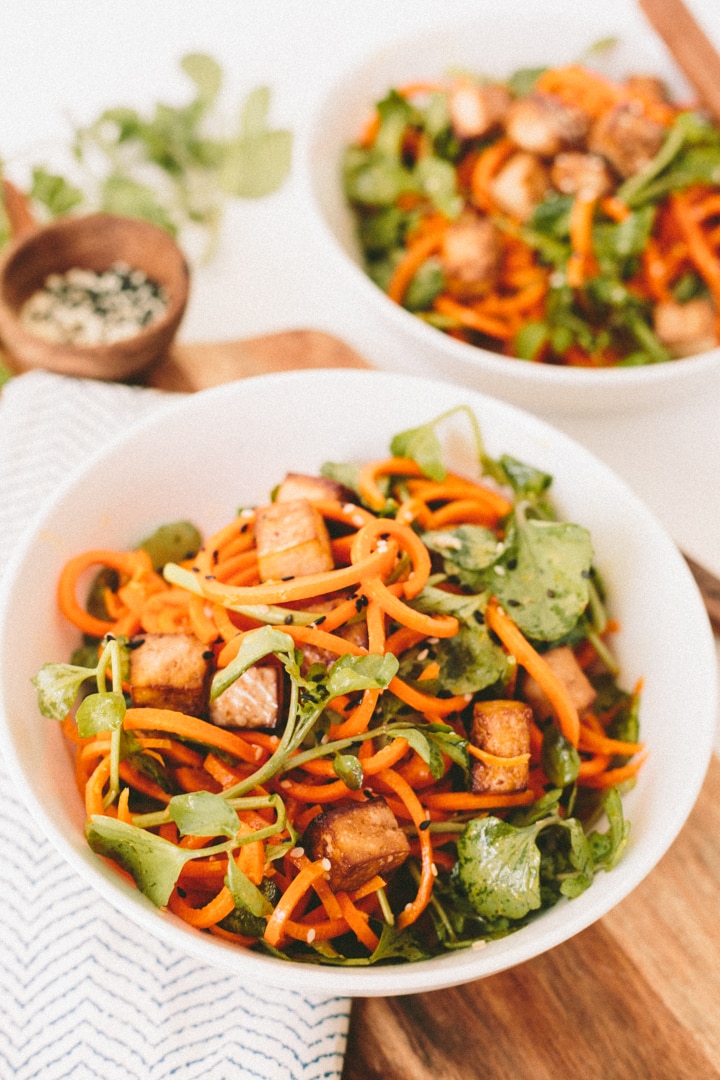 Finally, when I started Inspiralized, I was a pescatarian (I was eating dairy, but no other animal protein except for seafood.) I wanted this blog to be for everyone- vegans, vegetarians, those who are Paleo, gluten-free, dairy-free, or just plain omnivorous. Thus, I had to taste the food I was making and made the final decision to become an omnivore.

Having said that, I can’t remember the last time I ate a steak. But I can tell you, that when I was on my honeymoon, the favorite thing I ate was the pork carnitas.

All in all, being an omnivore with a vegan mindset is what works best for me. But that’s me. Everyone’s different and there are many people who believe that vegan food is just as (if not more) delicious than non-vegan food. I completely understand that, especially because there’s no better feeling than feeling amazing in your own skin, because your body is nourished to perfection. Plus, I rather have a roasted veggie sandwich with avocado over a meatball sub, any day.

Now that we’ve finally addressed it, let’s get to this vegan recipe. Watercress is simply the best, it’s my favorite summer green – and I get all giddy when I start to see it more in grocery stores and at farmer’s markets in the spring. 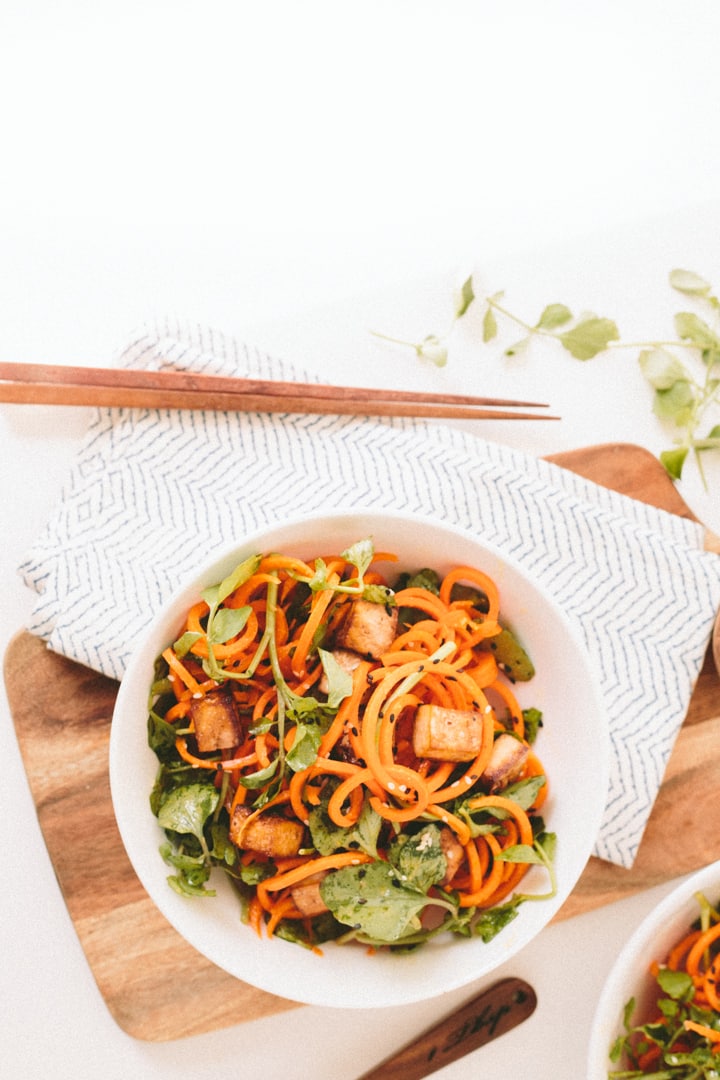 The tofu offers a savory protein and the ginger-miso dressed carrots are incredible. I love this dressing and I want to smother it on everything. This noodle bowl saves well in the fridge, it’s flavorful and it travels well – perfect for picnics and work lunches.

Thanks for listening to me today. And as I say on my About page, treat others as you’d like to be treated. :)​ 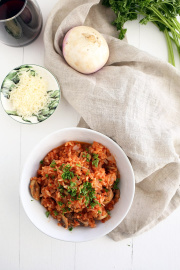