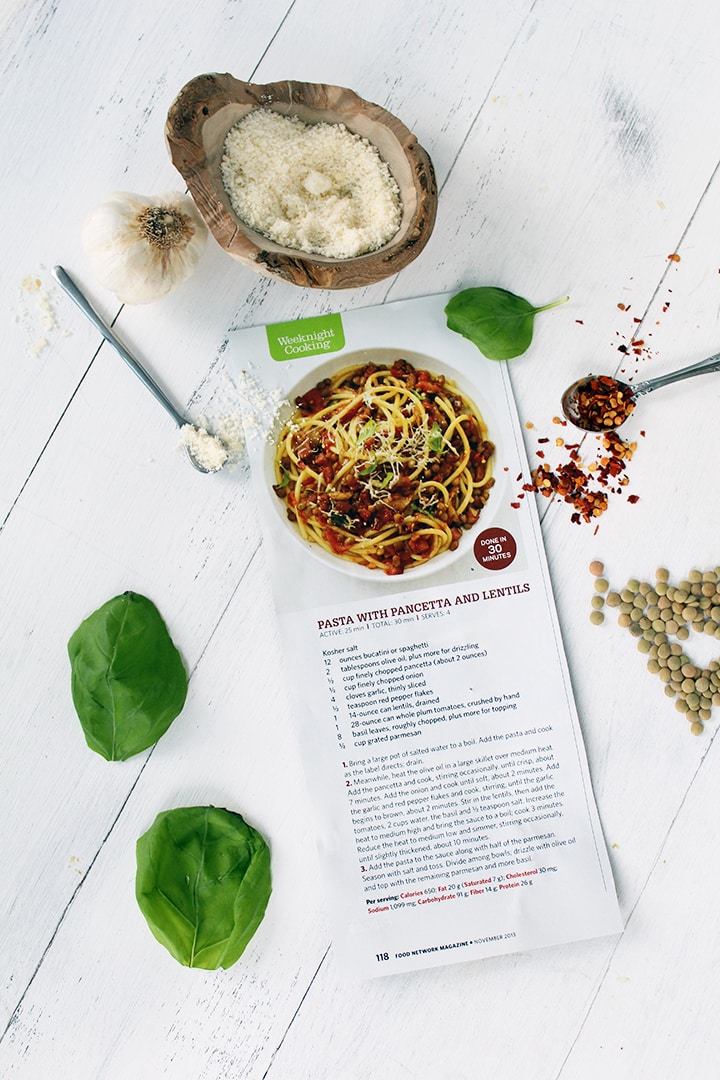 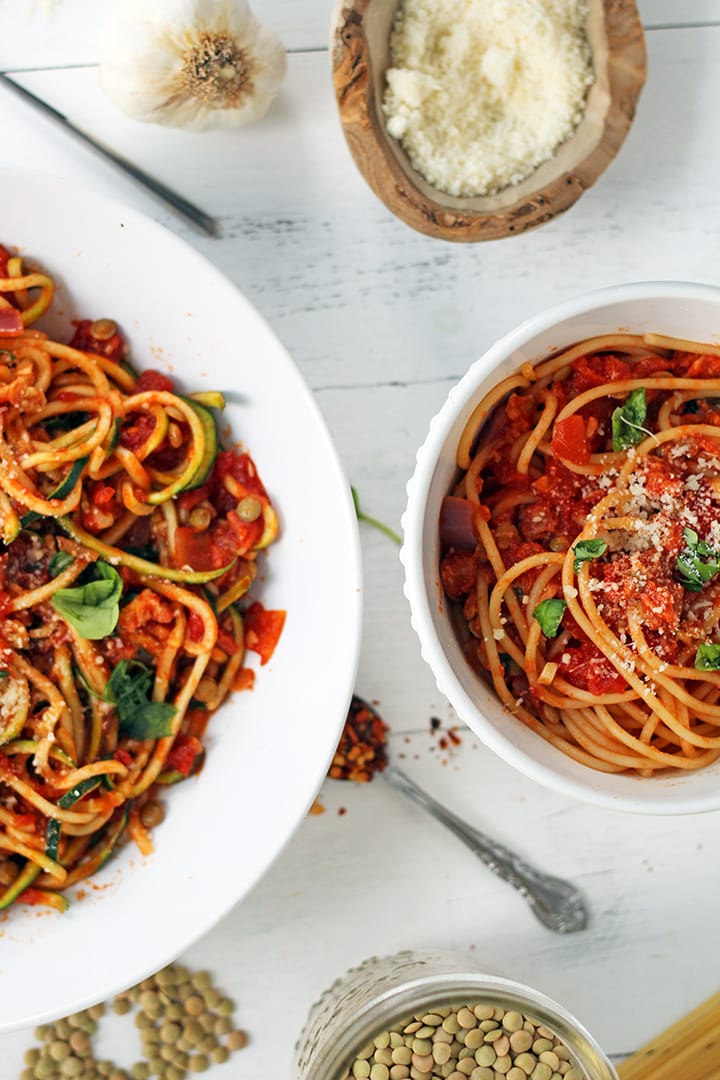 We all love to flip through Bon Appetit, Food & Wine or Saveur and drool over the recipes. Not only is the photography so perfect that you could practically lick the plate, their actual dishes always impress.

I read all the major food magazines not only to drool, but for inspiration for my own recipes. One afternoon, I was looking at Food Network magazine and I saw a divine looking bowl of spaghetti with pancetta and lentils. 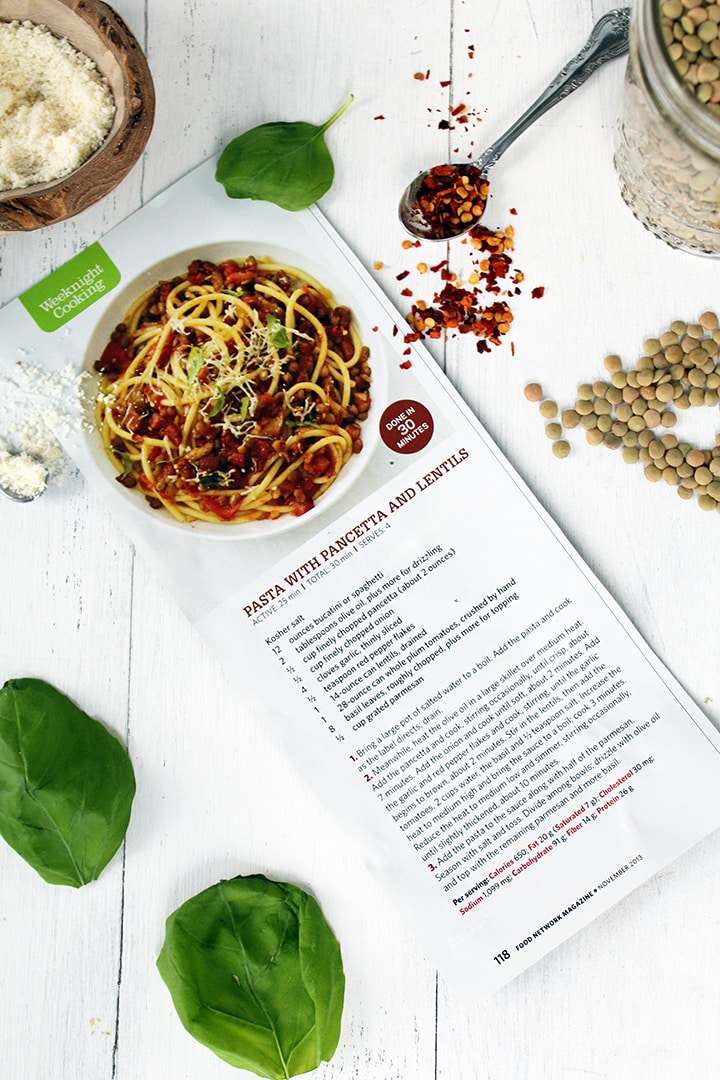 Now, don’t get me wrong: I’m not trying to rain down on Food Network magazine. In fact, just the opposite: their recipe was so mind-blowingly delicious, I had to share it with you today.

One difference, though. I Inspiralized it. This is something that’s pretty simple to do: swap out regular pasta/noodles for spiralized veggies. Thus, Inspiralizing. 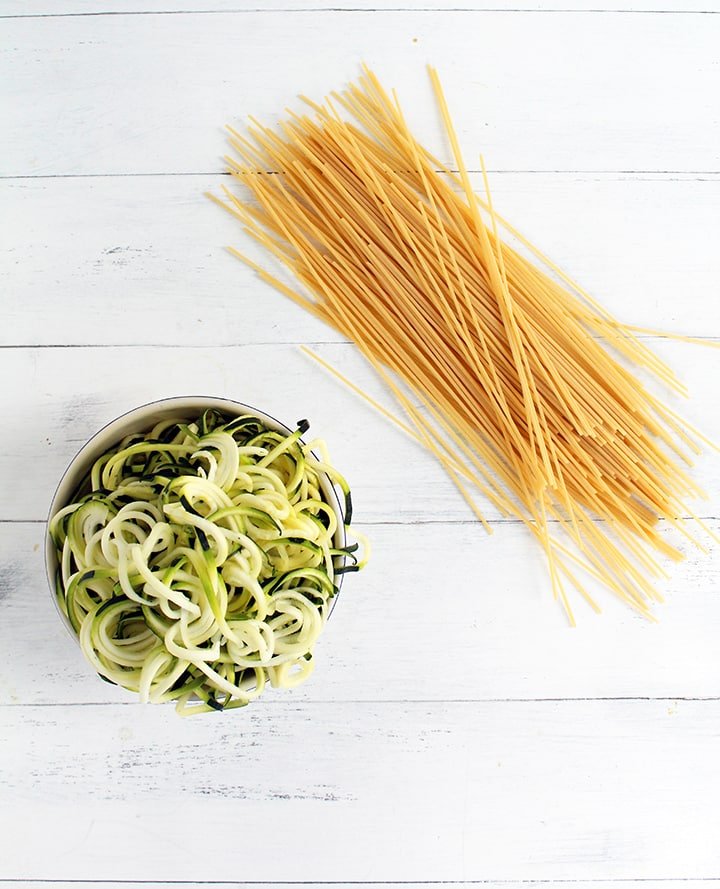 347. Phew, much better. That’s a hearty dinner. And heck, I can categorize it in my “Under 350 Calories” tab on my recipe index.

The Food Network recipe is 95.3% higher in calories than the Inspiralized version. Here it is: 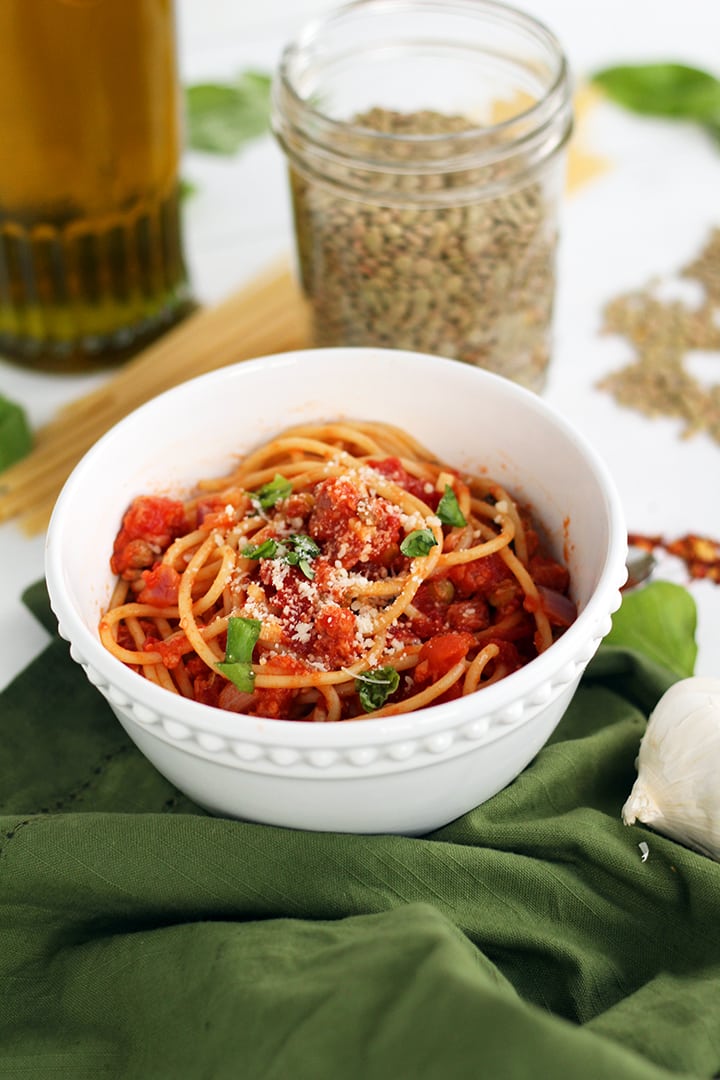 Here it is again: 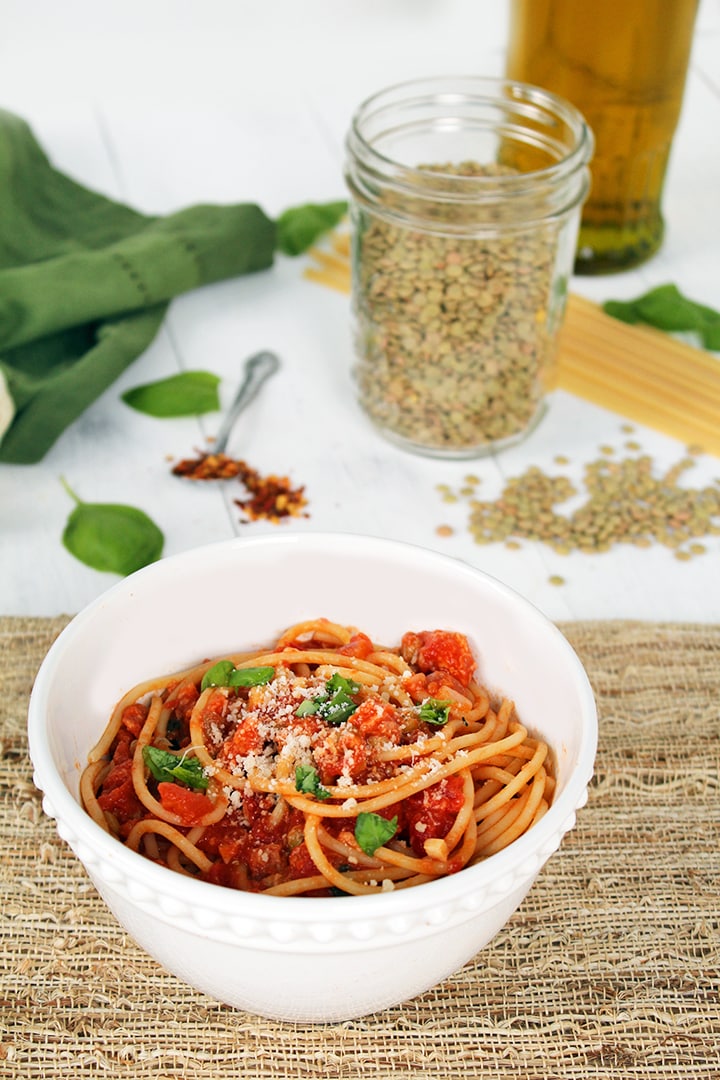 That would mean that, if you used a substantial amount of zucchini noodles to replace the Food Network recipe, the calorie comparison would then be: 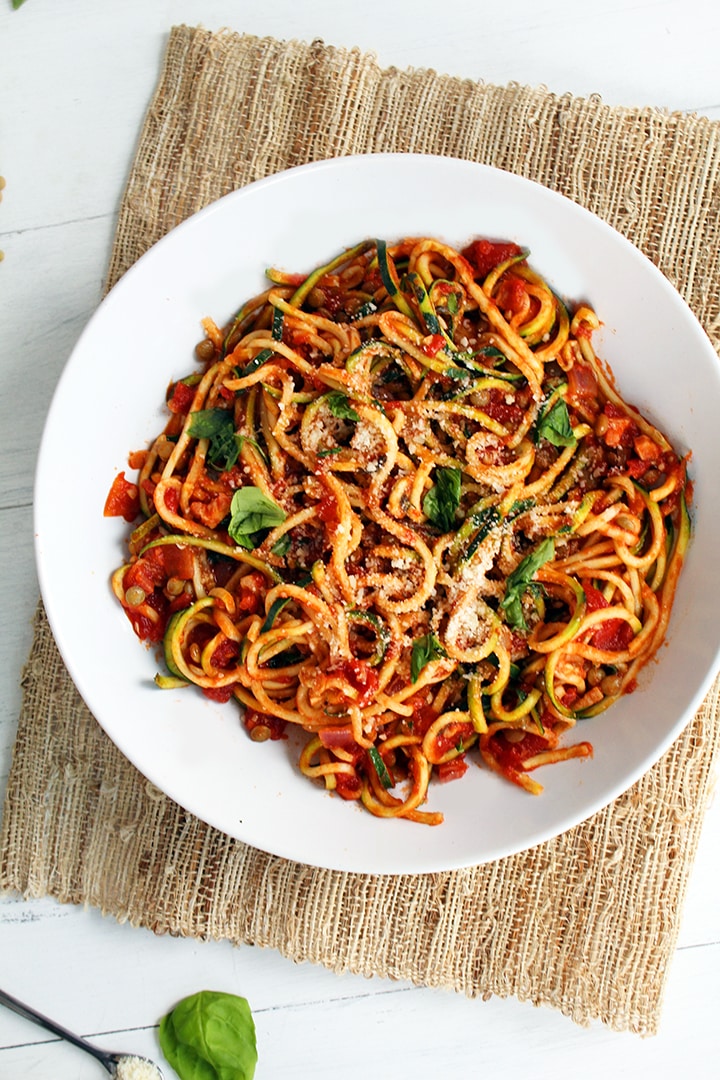 Let’s say that we’re hangry. We want a giant bowl of zucchini noodles, not just 12 oz. It’s Saturday night and we want to treat ourself. Go ahead and spiralize about 2.5-3 zucchinis.

Honestly, even Lu had a hard time eating this bowl of pasta (it’s huge!) We had a funny conversation afterwards, after he tried the regular spaghetti version (after eating the Inspiralized one). 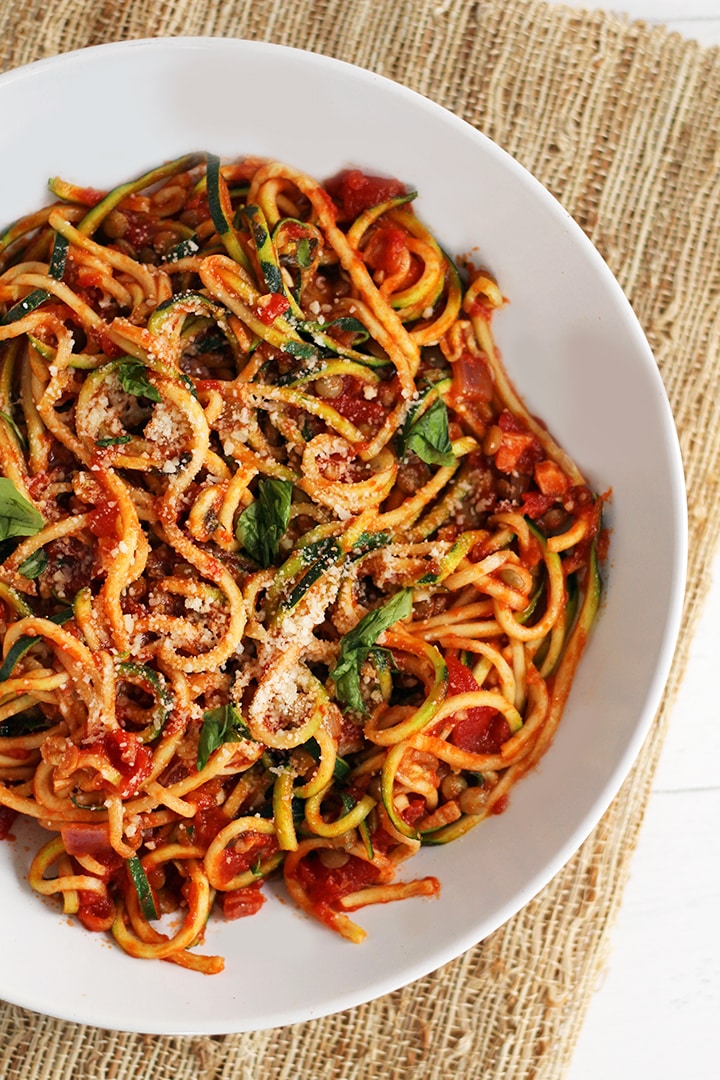 Lu takes a bite of the regular spaghetti, original recipe.

Lu: Oh. man *eyes roll in the back of his head*
Ali: What do you think?
Lu: I mean, spaghetti’s just so good.
Ali: I know, and I’m not trying to say zucchini pasta’s better, though. I’m Italian, that’d be sacrilegious!
Lu: Yea, but to be honest, I don’t miss regular spaghetti. It’s awesome, but there’s no point when you have zucchini noodles. 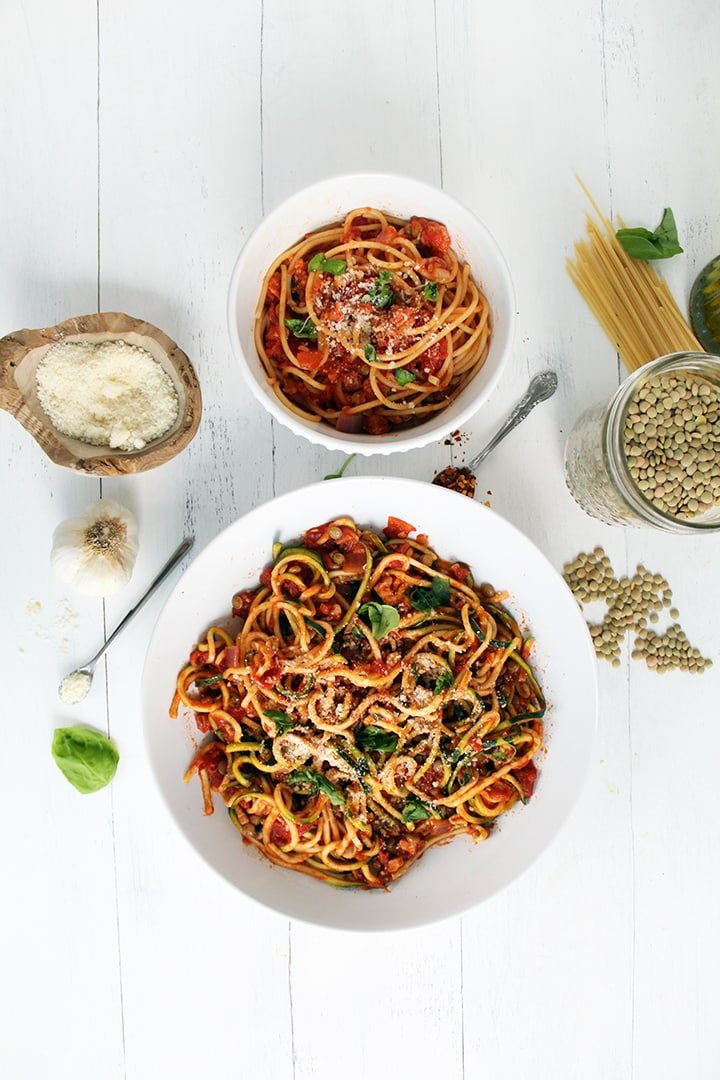 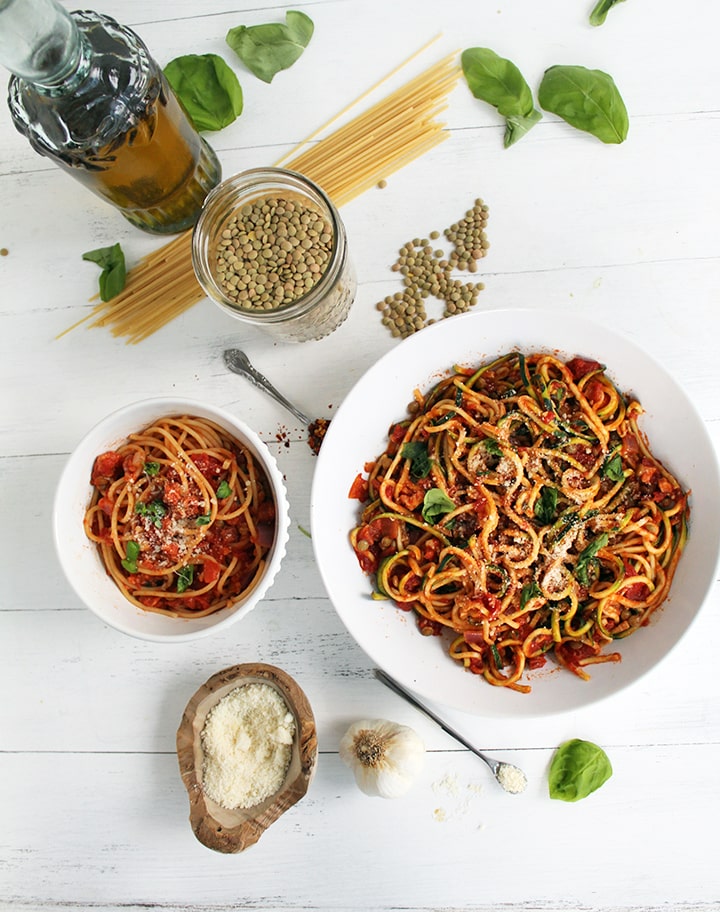 Plus, when you look down and your skinny jeans are finally fitting, you’ll be the winner. And as a disclaimer, I don’t count calories. Ever. I do it now to prove a point, but I eat clean, whole food, healthy meals without stressing over numbers or a scale. Lululemon’s Wunder Unders are often (okay, always) my best friend.

Are you convinced? What are your thoughts? 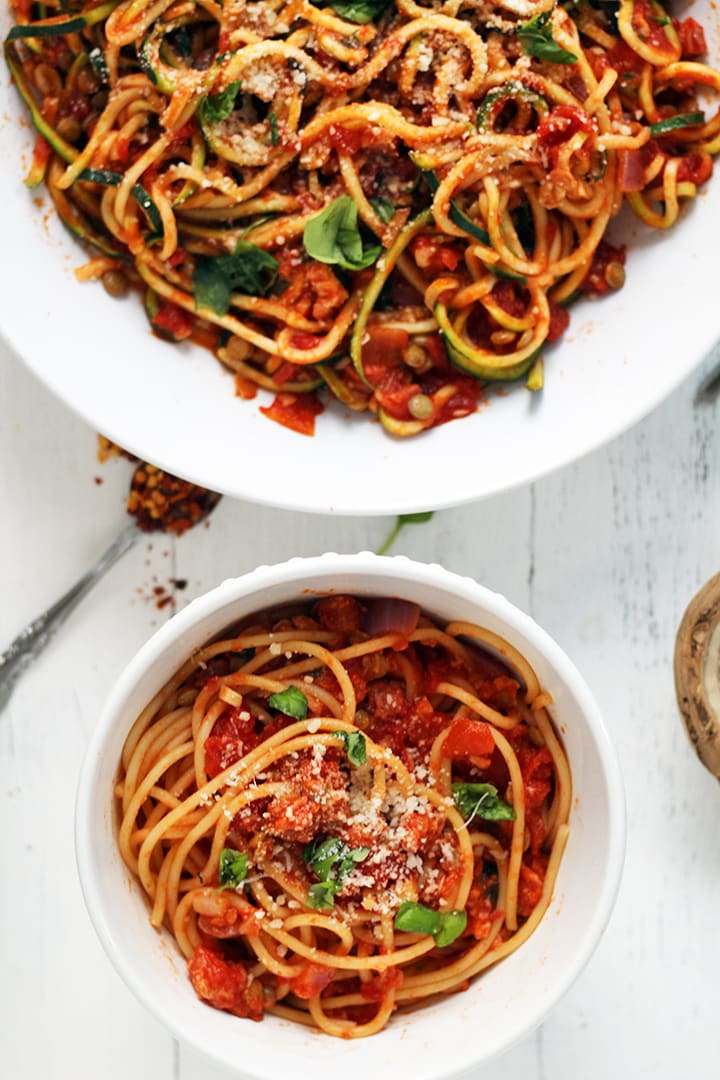 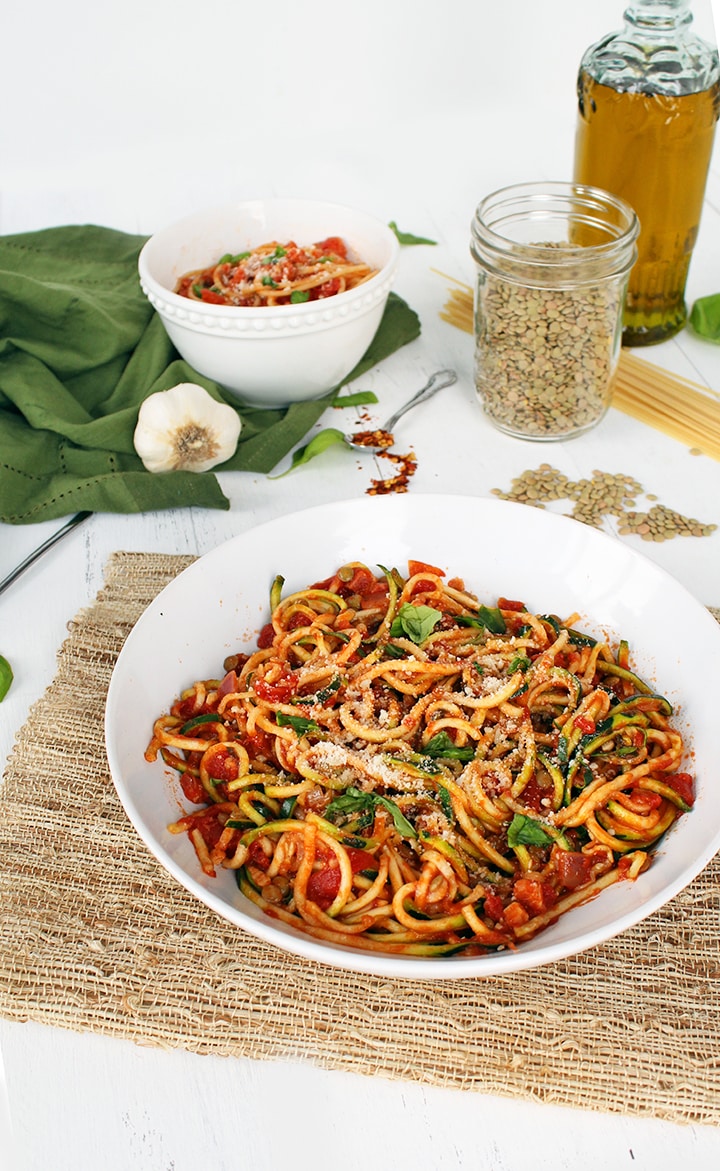 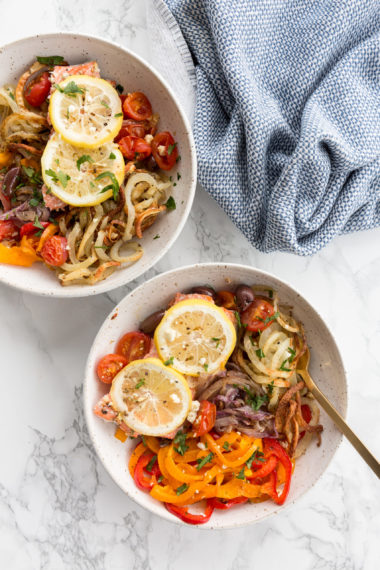 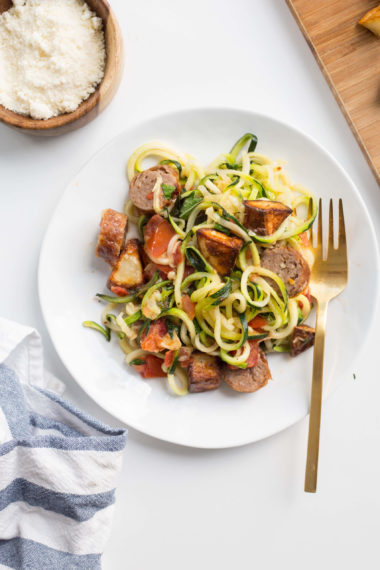 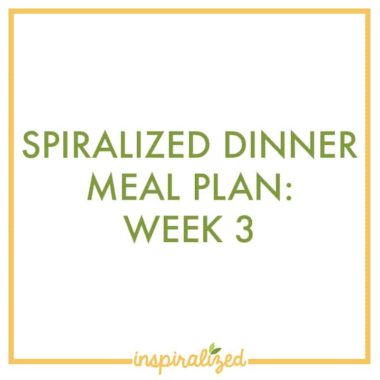 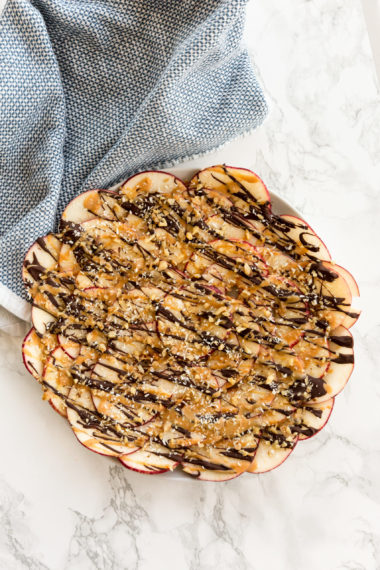 Sarah says:
January 28, 2014 at 1:08 pm
I am very happy that I found your blog - the recipes are so inspiring :) I bought a spiralizer just before I found it and I have to say, my first bowl of zucchini noodles, which was plain ol' zucchini and bottled sauce (I was hungry) :) were so - good- reminding me of my happy noodle days gone by. They may not be just like pasta noodles but to those of us not eating wheat having them was such a wonderful thing (preaching to the choir I know). I'd tried rice noodles and they just didn't work for tomato sauce. Zucchini does. Today I had no plan for lunch so I made zucchini noodles with garlic and curry powder, and popped on left over enchilada chicken - it's chilling out in my fridge at work for lunch! Can't wait to try this one as well!
Reply
Anonymous says:
January 28, 2014 at 9:39 pm
You've sooo inspired me. Can't wait for my spiralizer to arrive tomorrow. I can't decide which recipe to try first.
Reply
Alissandra Maffucci says:
January 29, 2014 at 12:25 am
Aw, yay! Thank you so much for the kind words.
Reply
Ali says:
January 31, 2014 at 2:56 am
I am SO happy I found your site (through your guest blog on Against All Grain). I bought my spiralizer a year and a half ago (tragic) and was afraid of what I'd find in the box, that it would be difficult to use or just a pain to clean. I am HOOKED and cannot wait to try everything you've posted. I can finally eat and not blend as much as I do!!! Best of luck to you, it seems like great things are happening :) I've already messaged a ton friends to follow you and buy their own!
Reply
Alissandra Maffucci says:
January 31, 2014 at 4:11 am
Thank you so much Ali - that is so sweet of you to send me this message! I'm so excited to have you on board and glad you found me through AAG! Welcome :)
Reply
Pingback: Show, then aid - Sabine - Page 373 | Mark's Daily Apple Health and Fitness Forum page 373
Meg says:
February 1, 2014 at 12:29 pm
Look Great! I wonder what the vitamin/mineral comparison is like for those of us not counting calories. :)
Reply
Alissandra Maffucci says:
February 3, 2014 at 3:41 pm
I'm sure it's just as impressive!
Reply
Pingback: Baked Zucchini Pasta with Pancetta, Olives and Broccoli | Inspiralized
Reba says:
March 12, 2015 at 8:00 am
I just stumbled upon your blog while looking up recipes for the spiralizing device that we have at home at the minute. I tried zucchini this way for the first time yesterday after the gym - it was so quick and easy adn tasted exactly the same as spaghetti to me (I have a hard time eating carbs, I gain weight easily so try to avoid them). It was delicous! I was actually so excited that when I called my Dad to wish him a happy birthday I couldn't help but mention it and also spoke with my mom about it later. It makes me excited to try all different types of recipes with it - I don't believe mine is as sturdy to do the likes of carrots, sweet potatoes, etc but I will have to purchase another one so I can just spiralize everything! Thank you for the recipes!
Reply