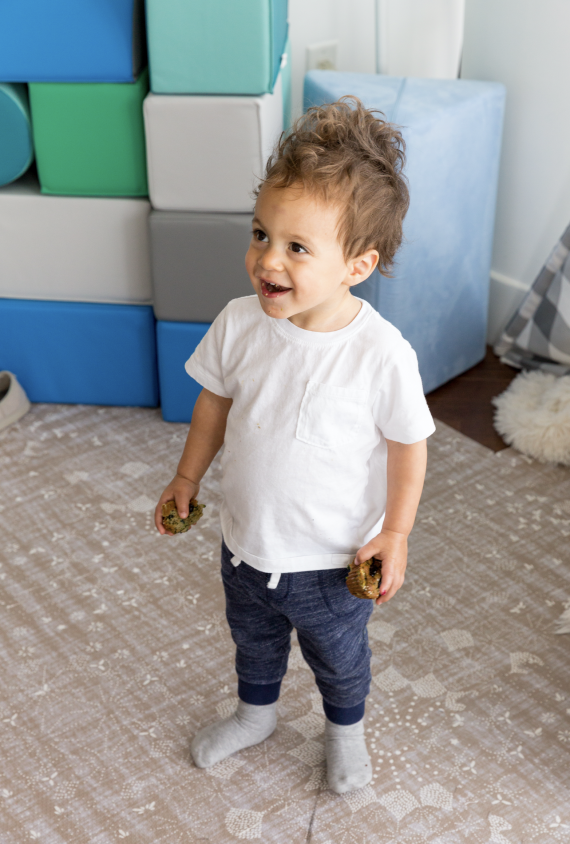 Motherhood
Before becoming a parent, you can’t help but have this preconceived notion of what you’ll...
share this post

Before becoming a parent, you can’t help but have this preconceived notion of what you’ll be like as a parent. How strict you’ll be, where your priorities will stick, and what your parenting style will be like. Along with this, you make a lot of proclamations that start with, “When I have kids, I’ll neverrrrrr [insert X, Y, Z]!!” And of course, soon enough, you’re doing X, and maybe Y, and maybe even Z!

And you know what? That’s okay. It’s okay, because you don’t know what type of parent you’re going to be until you’re a parent and most importantly, until you realize what kind of child you have. All children are different and have different personalities – and not all parenting techniques work on each child. It’s not all one size fits all. Therefore, you really won’t know if you’ll do X, Y, and Z until you are in the trenches, parenting.

I thought it would be fun to reflect back on the past 20 (almost 21) months with Luca and look to see what are some of the things I said I’d never do as parent that I actually have done and currently do. I was actually talking to my mom about this, because a lot of the things that most mothers feel guilty about these days are a) screen time, b) co-sleeping, and c) feeding their kids convenience foods.

Since my mother did all these three with me, I considered it normal, healthy parenting – you need a little bit of everything (kale and cookies, perse) for balance. Thus, I never said, “I’ll never let Luca watch TV before 2!” because I actually looked forward to the day he finally had an attention span to watch more than 30 seconds of a Sesame Street episode, haha. I gave him mac and cheese early on, hoping he’d like it, so I’d have an easy go-to meal for when I was exhausted or simply didn’t have the time to make an extravagant dinner. Sadly, he didn’t (and still doesn’t) really take to those types of foods, but he recently started loving chicken nuggets and it’s a Godsend! And as for co-sleeping, my mother said it was the only way she could sleep, so I always knew I’d have that as a fallback if I had issues, and now, I’m armed with information on how to do it safely, thanks to better educated pediatricians and of course, safe corners of the Internet!

Sometimes I think we shy away from what worked for generations and generations, because we have so much information now. So many studies. So much ‘research.’ We think we know better because we can Google. So many people telling us from different angles what we should and should not do, because there’s just so much access to information and different opinions. My parenting style is this – I want to grow from my parents’ mistakes, utilize new information that’s out there, but also repeat what they did successfully. And by talking to my parents about this, I’m able to learn a lot. Keep in mind that the way we evolved and reared children in the past was by a family or community support group (literally, a village would come together to care for newborns!) I like to incorporate some of that into my growth as a parent, while also realizing that it is 2019 and we do know a bit more. 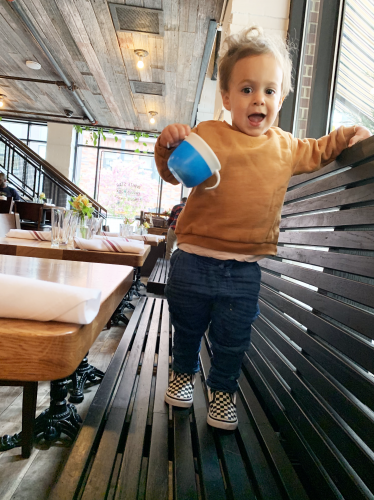 Okay, I didn’t completely give up on this, but Luca doesn’t want to be in his high chair at restaurants for too long, so I do let him out. BUT, I encourage him to stay around the table – he’s not just running freely screaming around restaurants. We try to get booths, so he can climb around the booth. OR, I’ll get up out of my seat (or Lu will) and we’ll take him around the restaurant. We don’t just let him run rampant and he’s not a screamer, so he’s not screaming. But, I definitely gave up on forcing him into a high chair for an hour long dinner. We’ve gotten creative and we take turns taking him outside, taking him around the restaurant, etc. When food’s here, he has to be at the table with us, but once we’re all done eating and we’ve exhausted everything at the table (crayons, toys, books, etc), we let him out. 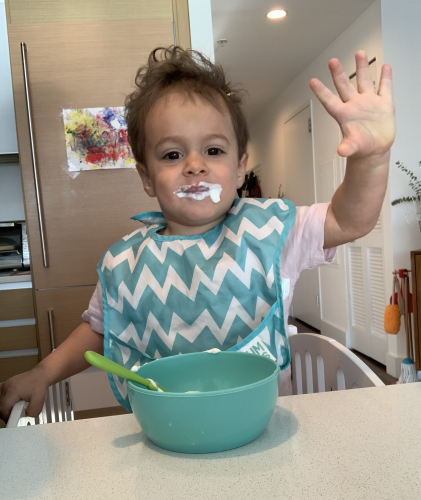 Obviously, it’s a choking hazard if your kid is running around the house with food in their mouth – God forbid they trip or fall and the food gets lodged in their throat, they can choke. It’s really scary. I had a couple of friends who did this with their children and I’d always say, “That’s terrible! It’s so dangerous!” THEN, about 1 year into Luca’s solids-eating-experience, he started changing. He was just so active, and didn’t want to be in his high chair. He’d scream to come out, but then when I’d say, “Okay, all done?” he’d cry for food and grab at his plate. I started letting him stand (supervised) around me while he ate from the plate. Sometimes, I’d sit on the kitchen floor and make him sit with me on the floor as he ate. While I still don’t let him run around with food, he doesn’t always have to be in his high chair, I’m much more lenient with that now. Often times, I’ll let him eat in his Learning Tower, because he’s more contained. When we’re out at restaurants, I don’t let him run around, but often times, the only way he’ll actually eat is if he’s standing or kneeling. And ya know what? It’s not the end of the world. As long as he’s not thrashing about, I deal with it. This isn’t every single time we eat a meal, it’s maybe 20% of the time. And that’s okay. We all need some leniency. 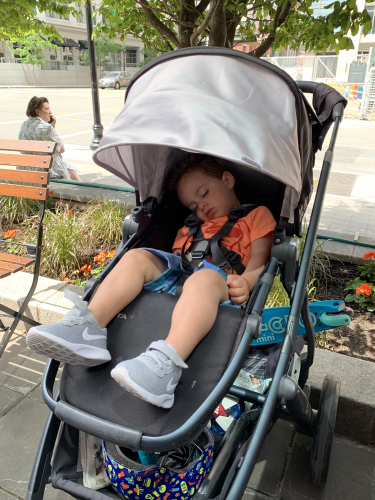 I’ll never be a slave to his schedule

There are a few mamas in my life that had no lives because they’d constantly plan everything around their babies’ nap schedules. I never wanted that to be how Lu and I did it. It seemed like a death sentence! Your baby can only nap in the crib? Not for us! And I’m happy to say that we were SO good about this until Luca moved to the one-nap schedule. As a baby, he slept everywhere – in the stroller, in the car, on the beach in a tent, in the baby carriers, wherever he needed to sleep, he slept. It was liberating, because it meant that we had a flexible schedule. We intend on doing this with baby #2 too, also!

Having said that, once Luca became a toddler and switched over to a one-nap-a-day schedule, that nap became CRUCIAL. If he couldn’t nap, it threw off the entire day. After all, it’s a good 1.2-3 hour nap, so it’s hard to have that in a car or a stroller (and we don’t baby wear him anymore.) So now, we’re a bit stricter with his schedule. We plan our days around that nap! We’re not crazy about it, but usually we’ll only flex 45 minutes-1 hour because otherwise, he gets overtired and will refuse a nap and then it’s just a mess. Sometimes he does refuse a crib nap, so we stick him in the stroller and it does the trick, but it’s rare – we really like to get that crib nap in, for our own sanity!

I’ll never use a pacifier

HA! HA! HA! How can I even make an assertion like this without ever having a baby? But yes, I thought I’d never use a pacifier. I think I was mostly afraid of sleep. I didn’t want to have to wake up in the middle of the night and have to put the pacifier back in the baby’s mouth. I also didn’t want to be THAT parent with an old toddler with a pacifier still. I waited 5 loooong weeks to introduce a pacifier to Luca. And after that, I started giving it to him to help him take naps. I’d take it out once he fell asleep. And then, he started sleeping longer with the pacifier (duh), so I stopped taking it out of his mouth when he fell asleep. And while he only got the pacifier for travel and sleep times, he was a full blown pacifier lover. We eventually weaned him and it wasn’t that bad, but I’m all admit it: I always said I would never use a pacifier, and I did! 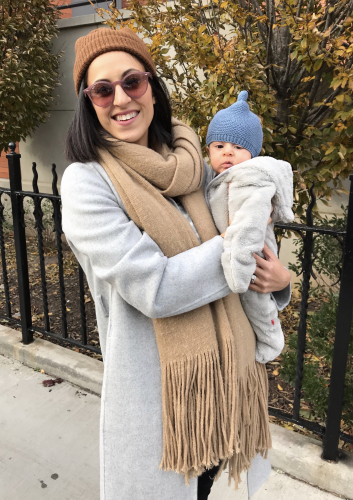 I’ll never be a germaphobe

I always scoffed at mamas (so judgy, right?!) who would disinfect everything around their children, always. I would think, “What a germ freak! Babies need germs!” WELL, another ha-ha-ha! If you see me on an airplane (I’m better now), I’m rubbing down everything with disinfectant wipes. And guess what? Aside from my immediate family, I didn’t let anyone come visit the baby until he was almost 3 months old. Can you believe that?! 3 MONTHS! Not this time… granted, Luca was born at the beginning of flu season, so that was a worry. But this summer baby is getting OUT! While I’m not a total germaphobe, I definitely surprised myself with how anal I was about people washing their hands the second they got into our apartment, etc. I’ll never forget, I agreed to meet friends out for brunch and Luca slept in the stroller bassinet and I barely let them take a peek! He woke up and I didn’t even feel comfortable letting them pick him up! I was a psycho.

As a fun exercise, I polled you in the Inspiralized Mamas Facebook Group and on Instagram to see what are some of the things you said you’d never do as a parent that you do now, and these were the most common answers:

Hope you had fun reading this – and remember, you’re doing an amazing job. We’re all first time mothers once and we’re just doing our best and what makes us comfortable. Doing our best is all we can ask for and offer. We grow everyday as people, parents, and we’re just learning together! Don’t be hard on yourself – being a parent is hard enough.

Anything I missed on these lists? 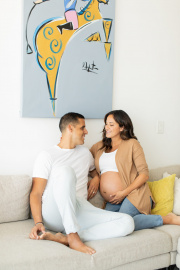