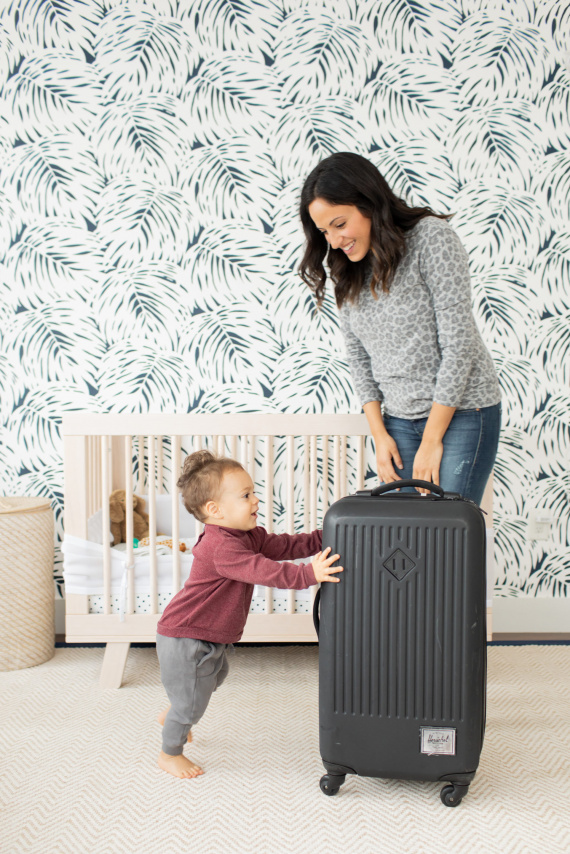 Tips For Plane Travel with a Young Toddler

For reference, my son is 16 months old at the time of this post, so he’s a young toddler. When children are older, there are more tactics for facilitating travel, but these tips are based on my experience traveling with my son. He’s taken 18 total flights since he’s been born!

Before you review my Toddler Tips For Travel, check out my post on our very first flight with Luca, as well as a what to pack for a beach vacation with a baby, which may be helpful for you as well.

From my first plane trip with Luca and this post, these tips still remain true in toddlerhood:

now, enter toddlerhood – the game is a bit different. the baby doesn’t just sleep for the majority of the trip (oh how I miss those days!) and the baby is mobile! if your child is anything like ours, he wants to touch everything, climb around, and has an unfathomable amount of energy. the biggest struggle is keeping a toddler entertained when they don’t color yet, watch movies, or do anything that requires an attention span.

Tips For Plane Travel with a Young Toddler

here are the tips we’ve picked up on the flights we’ve taken with Luca, now that he’s a toddler.

if possible, book the bulkhead seats

Lu and I have a strict “only bulkhead” policy when we book flights. Lu has always preferred those seats, because he’s almost 6’4″ and his legs are more comfortable that way, but now with a baby, it’s a game changer. before the flight, during the flight, and when we’re taxiing and almost off the flight, Luca can play on the floor. we lay down an old blanket so he has a soft (and clean!) area to play on and we wipe down all the areas around the bulkhead. he usually just likes to stand and play with whatever’s in the seatback pocket. but, he’s so squirmy that it’s nice to have a place to put him down during the flight.

book the window and middle seats

I used to think the aisle was better, but once Luca started moving around a lot (and wanting to grab people and things as they passed by the aisle), I realized the window and middle seat are the best. this is best, because Lu will sit in the middle and be the buffer between Luca (and me) and the other passenger sitting in the aisle seat. I find that I have more room to spread out with him (especially when/if he’s napping on the flight) and I can rest myself on the window. plus, Luca loves looking out the window!

book the flight around your toddler’s nap times

this doesn’t always work out, because air travel is unpredictable and delays and cancellations happen, but we try as hard as we can to book flights around Luca’s nap times. right now, he is still on two naps (one around 9:30/10am and one around 1:30/2pm.) SO, we’ll aim for a flight that takes off around those times so that by the time we get in the air, he’s already sleeping or on his way. this way, we get to just chill for the first 45 minutes to an hour of the flight, which is really nice. it also limits Luca’s cabin fever. he just sleeps in my arms. 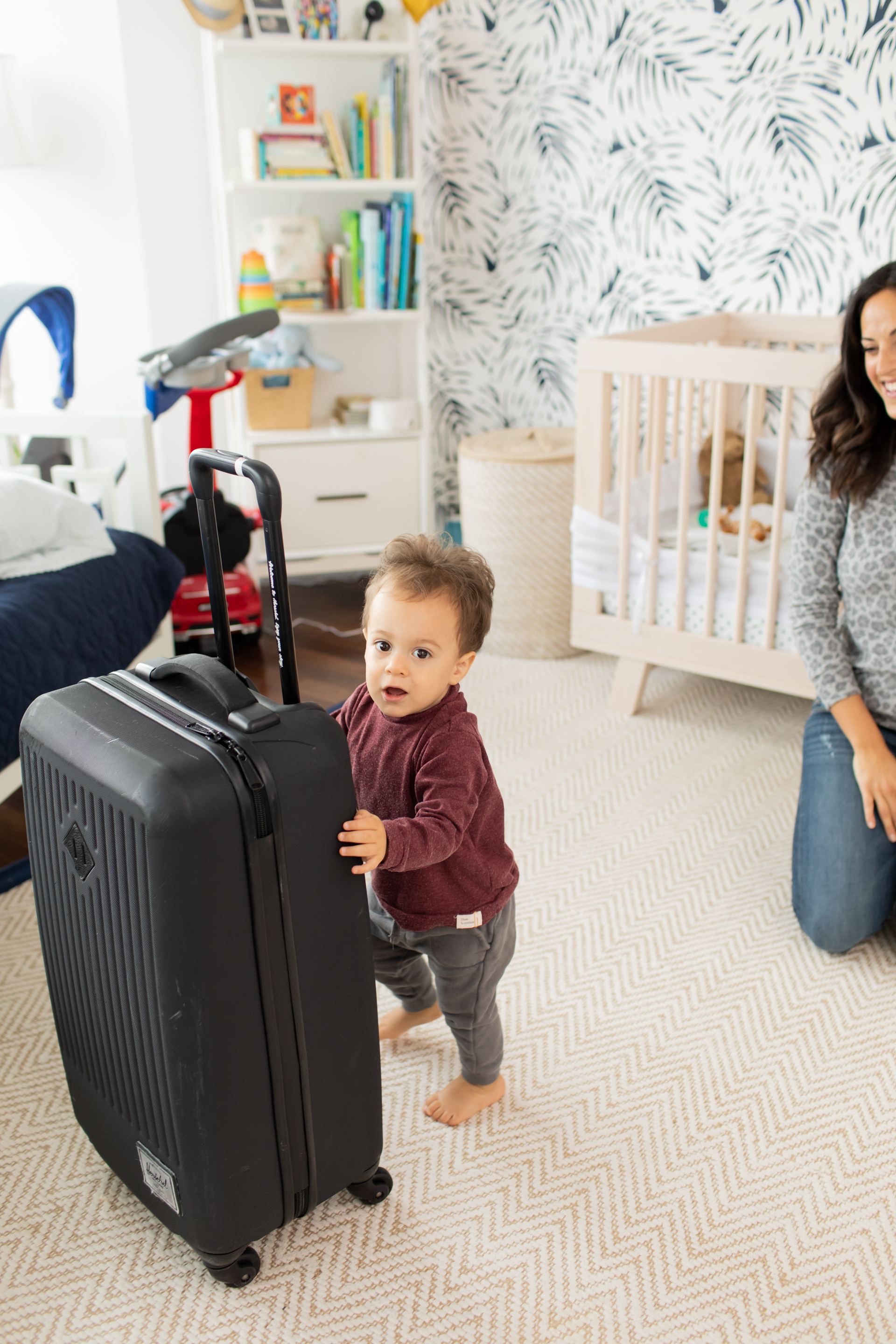 pack a little bag with all changing necessities

I wish I had heeded this advice when Luca was a baby too. better late than never! all diaper bags come with an insert for dirty clothes, right? I use this to pack the changing essentials – a couple diapers, diaper cream, trash bags, and wipes. this way, when it’s time to go change Luca’s diaper on the plane, I can just grab that instead of fumbling to find everything in my diaper bag and ultimately forgetting something.

bring toys and books that are new or favorites

this is pretty standard, but bring some ‘surprise toys’ and your child’s favorite books, so you can have something to grab their attention. since their attention spans aren’t great, it’s kind of tough to find toys that are good for this, but usually something that lights up or makes noise is helpful. for example, Luca loved this phone last flight.

I don’t use snacks as a way to keep Luca quiet, but if the flight does fall around snack time, it’s nice to have a snack to buy you 10-15 minutes. we love bringing clementines, crackers, Purely O’s, and anything that takes time to eat and isn’t messy at all.

download something on your phone, in case all else fails

Luca is usually pretty good with general games, new toys, books, and just playing on the floor (of the bulkhead seats), so we rarely give him screen time, but we’re not opposed to it at all and have whipped it out when the time has come when he’s just having a bad flight. Lu downloaded all of Sesame Streets’ celebrity songs to his phone and he’ll play those, and Luca will usually sit for 10-15 minutes and watch it. otherwise, we’ll flip through our Camera Roll and play him videos of himself, he loves that! 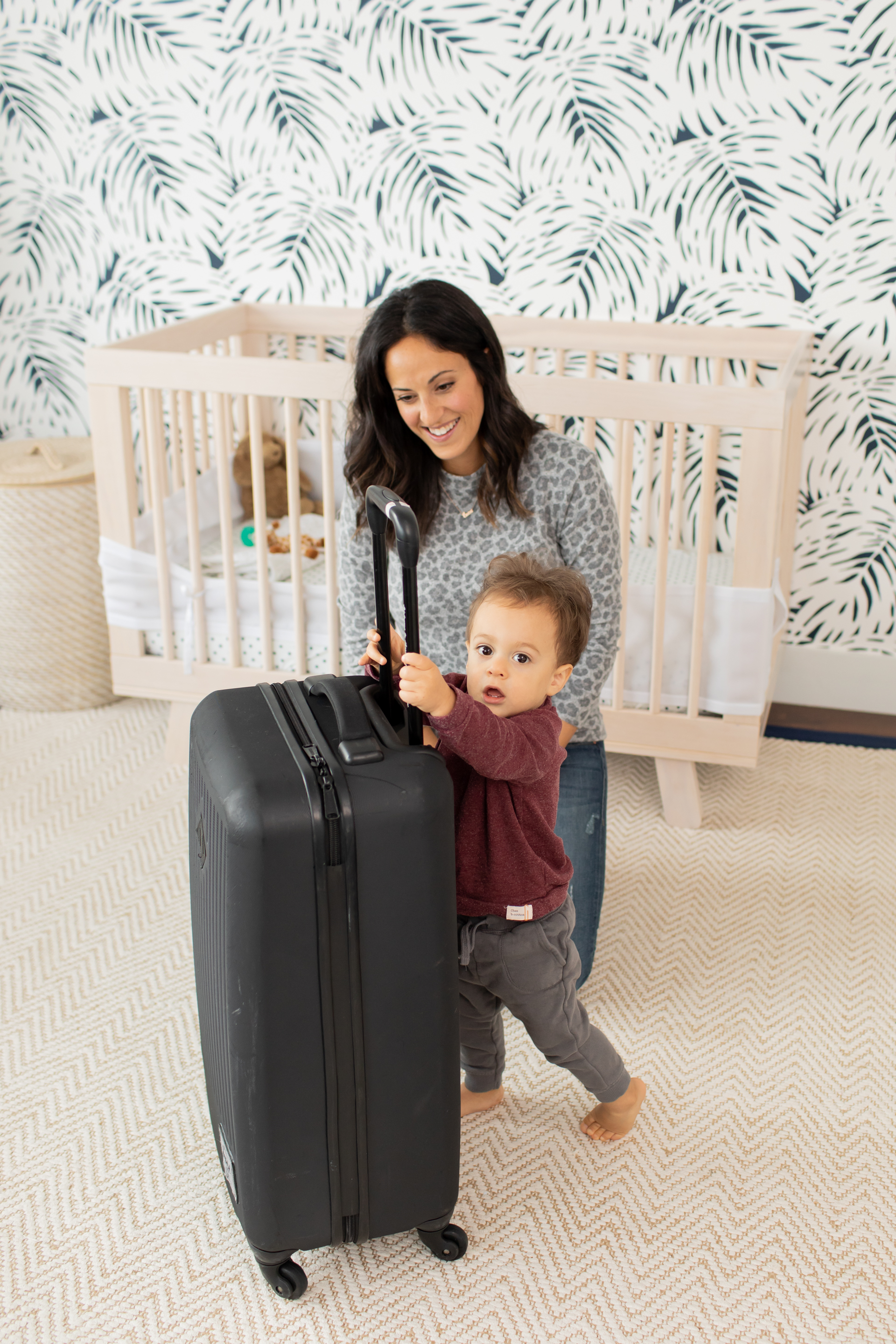 navigating through the airport and hotel

now that you have my tips for the airplane, let’s talk about the airport – what do you bring/check?! for us, we’ve got it down to a science.

at first, we just lugged Luca through the airport in a baby carrier. once he became a toddler, that became a bit more difficult, so we switched to using an amazing travel stroller called the BabyZen YoYo. It literally folds and unfolds with one hand and it fits in all overhead compartments. so, we put him in that once we get to the airport and out of security and then when we’re on the plane, we put it in a bin above our seats. when we arrive, it’s so nice to have the stroller again for the airport. it is by far our favorite baby registry gift we ever received! and then, wherever we are, this is the stroller we use on our trips!

now, you’re probably asking, “well, do you check a carseat?” and the answer is no. what we do is we call the hotel ahead of time to confirm if they have a carseat. I call the concierge and ask them to send a photo of the carseat so I can see if it’s compliant with Luca’s age and size and then I confirm that we’ll be able to use it during our stay. when we’re at the hotel and need to go off property, they set the carseat up in the taxi or, if using, the rental car for us! rental car companies also have car seats, we’ve used those as well! we have never had an issue and it limits the struggle at the airport.

and that’s it! those are my travel tips for young toddlerhood. I’d love to hear some of your tips, or let me know if you have any questions! 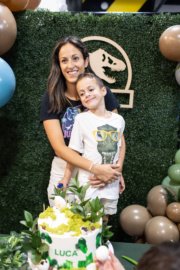