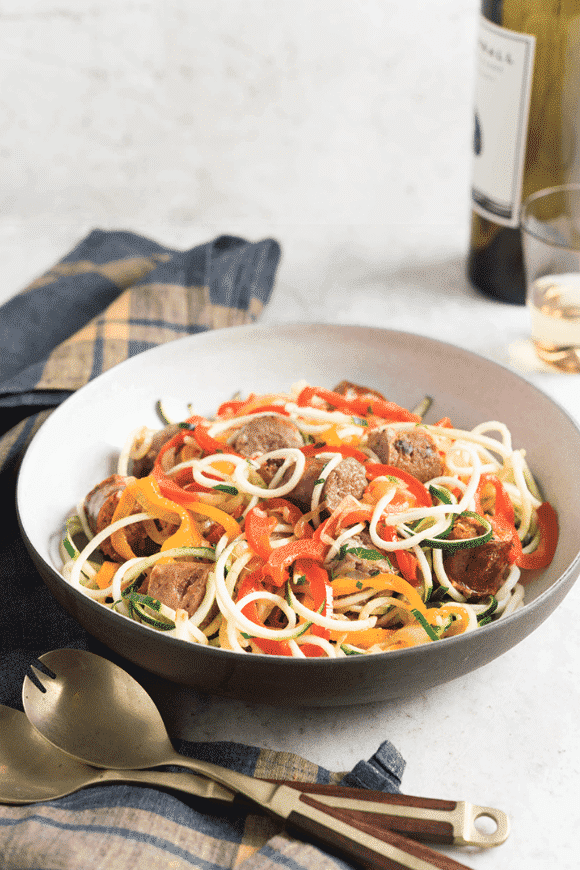 Today, I’m giving you a sneak peek into Inspiralize Everything by sharing with you one of the recipes from the “Zucchini” chapter:

Sausage and Peppers with Zucchini Noodles.

Inspiralize Everything comes out in a few short weeks (it releases Tuesday, August 16th!) and is organized differently than my first cookbook. My first cookbook was divided by meal type (breakfast, noodles, rice, soups & salads, etc). Inspiralize Everything is divided by vegetable, A-to-Z, apples-to-zucchini! Both cookbooks were photographed by Evan Sung and published by Clarkson Potter!

So what does that mean? It means that you can grab, say, a zucchini, and flip to the Zucchini chapter and find all of the recipes that use spiralized zucchini as the base.

However, like with my first cookbook, each recipe comes with a Tip box that says “Also works well with” where I denote which spiralized veggies would ALSO work well in the dish.

That’s just one of the many benefits of my next cookbook! There are over 120 recipes (my first book only had 86!) and more photos, tips, and tricks. PLUS, if you pre-order you’ll receive a bonus packet with the following:

More to come on that – and the pre-order packet will come out in August, if you ordered (no matter where you order from.) 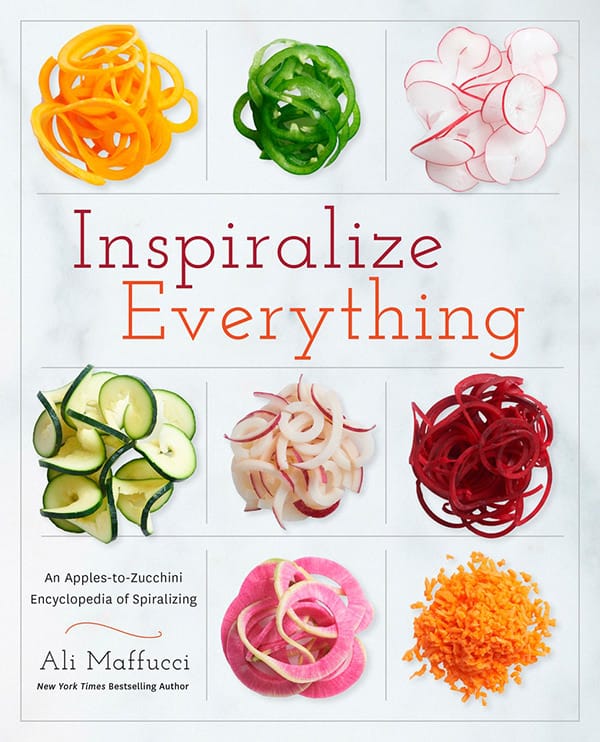 This recipe has it all: sweet and spicy Italian sausage, veggies, and an olive oil and garlic base that bring me back to my childhood days at my grandparents’ and their big bowl of sausage and peppers. It was usually accompanied by some crusty semolina sliced bread for dipping. Or, served with pre-sliced sub sandwich bread for the stuffing.

Regardless of how it was eaten, it was gone within seconds. Now, I’ve added zucchini noodles in there to soak up the juices from the cooked sausage, infuse some healthy fiber and nutrients, and add color!

And don’t be afraid to change up the noodle blade here – all Blades (A, B, C, and D) on the Inspiralizer work perfectly!

Hope you love this recipe from Inspiralize Everything and you support me and Inspiralized and pre-order. Here are the retailers you can currently pre-order from:

My second cookbook, Inspiralize Everything, is coming out August 16, 2016 and is currently available for pre-order through the following channels:

Thank you for all of your support!

Check out the latest post on my lifestyle blog, inspiralized ali: 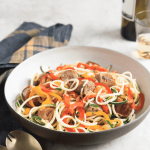 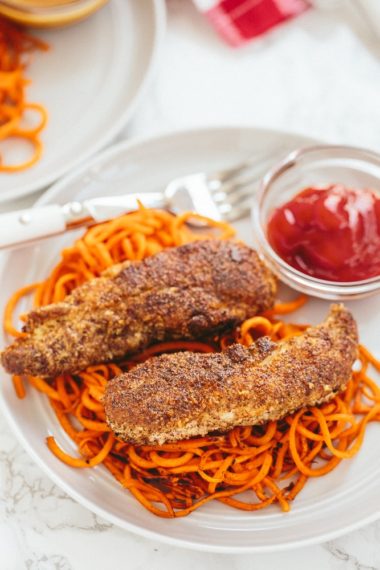 Spiralized Recipes To Make This Spring 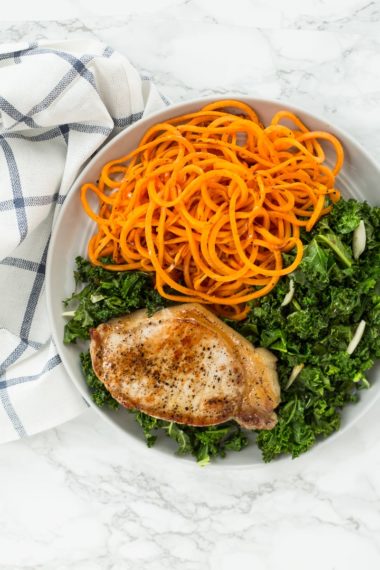 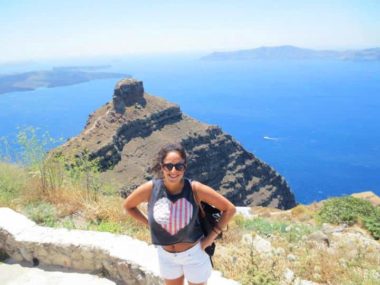 Open
the best part of these cookbook photoshoots (this

Open
day 2 of our cookbook photoshoot is underway, and

day 2 of our cookbook photoshoot is underway, and we're so overjoyed with how amazingly this book is coming together! 👏🏼 there isn't a recipe that hasn't been tasted and loved, every photo is absolutely stunning, and we're truly working with the dream team here @evansungnyc 📸 @carlaghart 🥣 @hadassmirnoff 👩🏻‍🍳⁣
⁣
I know it's a while until the book will be out and available, but trust me: IT'LL BE WORTH THE WAIT! right, @feedinglittles?