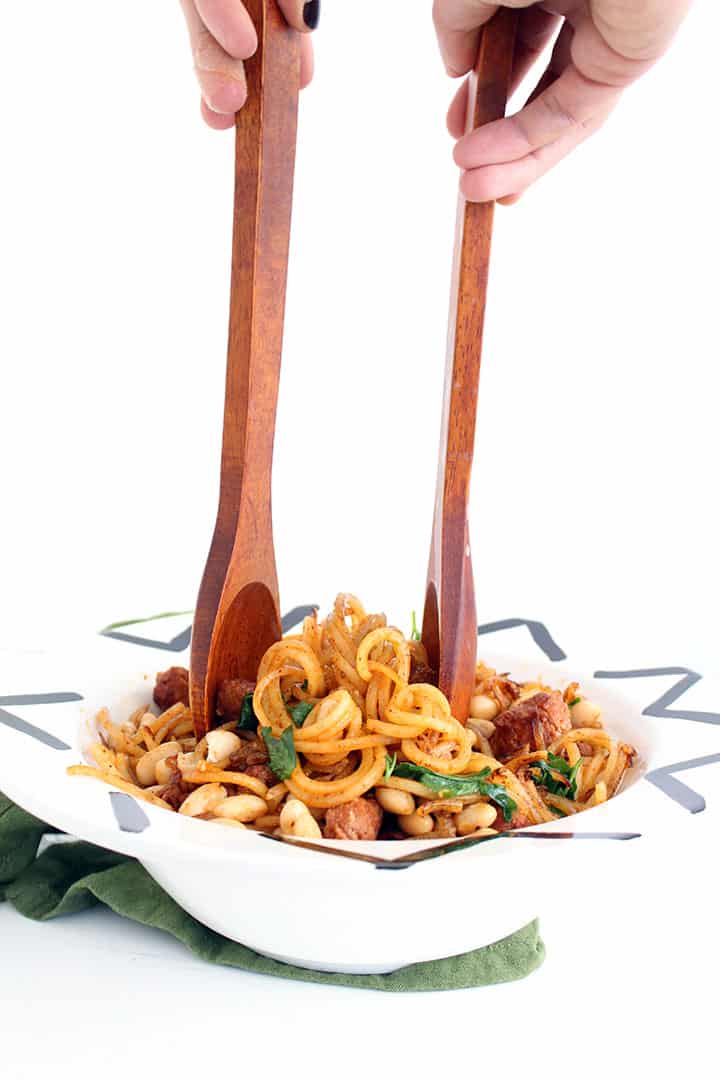 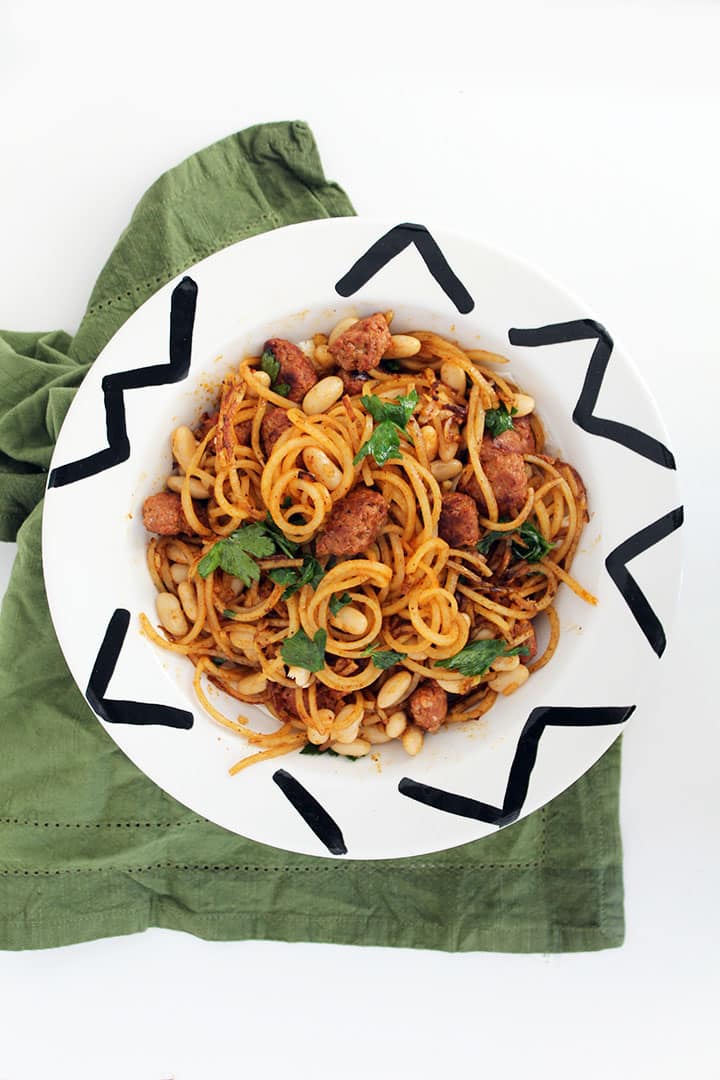 Last weekend, Lu and I drove to Storm King, NY and visited the Storm King Art Center, which is an outdoor sculpture “park.”

You basically walk around a park, looking at art installations. It was pretty cool – it’s different than something we’ve ever done together. While the art didn’t WOW me, it was interesting and pretty amazing that these artists got their sculptures up there.

Also, it was nice to take a road trip! Definitely a fall bucket list item checked off. 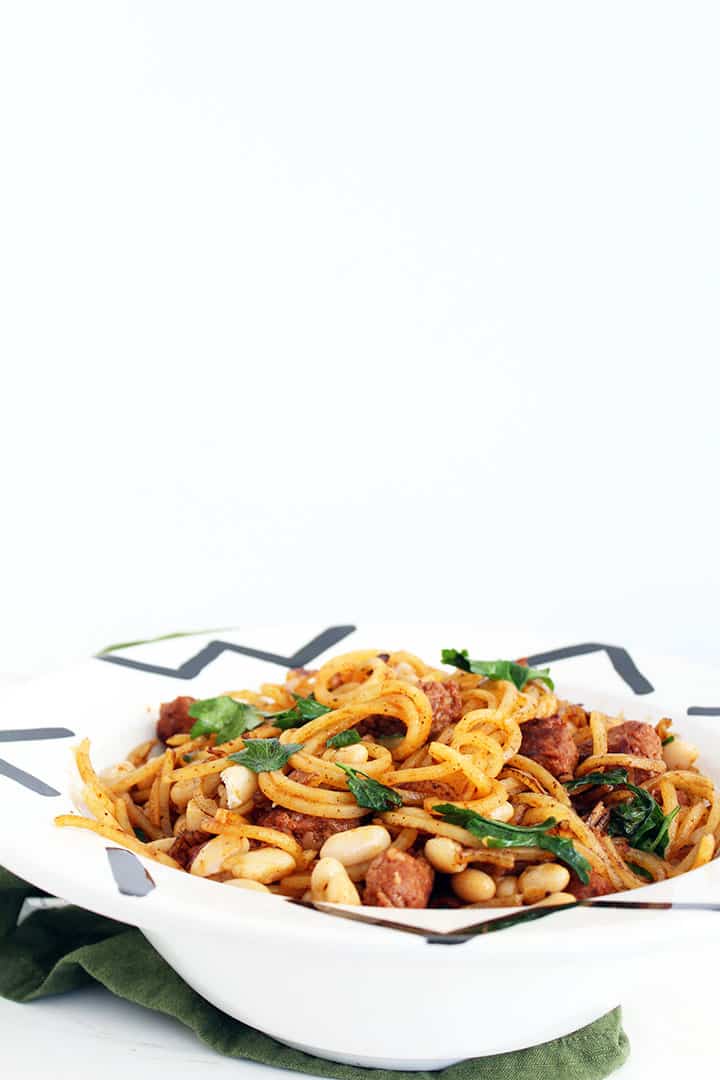 After we worked up an appetite walking around, we drove 15 minutes away to a town called Beacon, which we kind of fell in love with. It was adorable aesthetically – cute shops, restaurants and architecture.

We stopped at a restaurant that’s right next to a waterfall, which was so picturesque. We were just typical lovebirds, drinking wine, having a late lunch and — ya ya I know, I know, you’re all rolling your eyes. 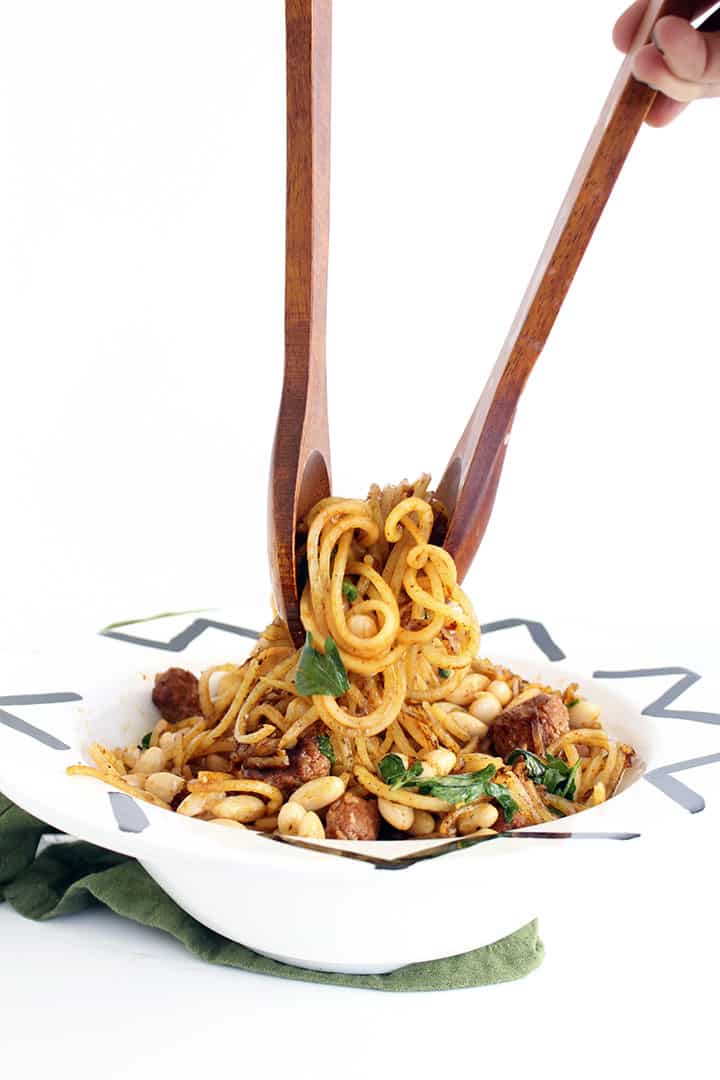 There’s a point to this story.

While we were at this waterfall restaurant (called The Roundhouse), we ordered Sauvignon Blancs and this incredible octopus, chorizo and white bean appetizer that was heavenly. 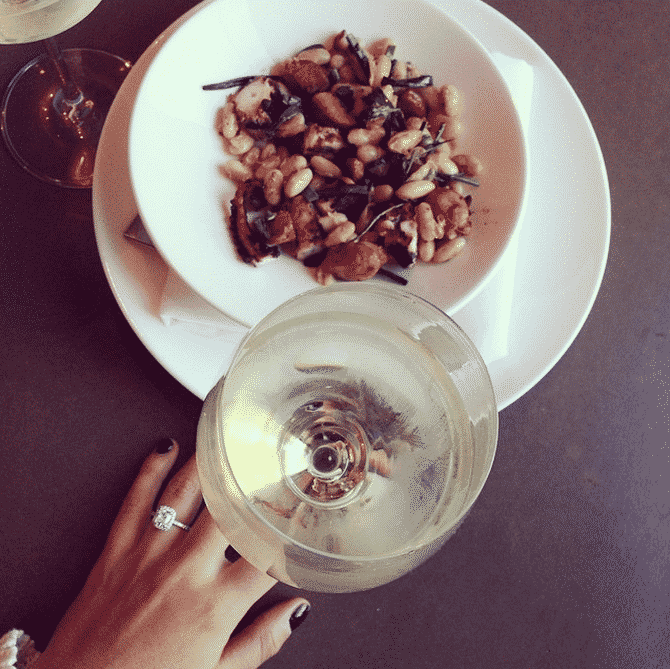 It was spicy, flavorful and had such amazing textures, I couldn’t stop thinking about it, especially when we were in bumper to bumper traffic getting back home.

In the end, Lu actually gave the suggestion that I make an Inspiralized version. Of course, you can’t spiralize octopus, chorizo or white beans, so I simply added in big parsley leaves and spiralized potatoes to turn this appetizer into a fulfilling main course or a heavy starter. 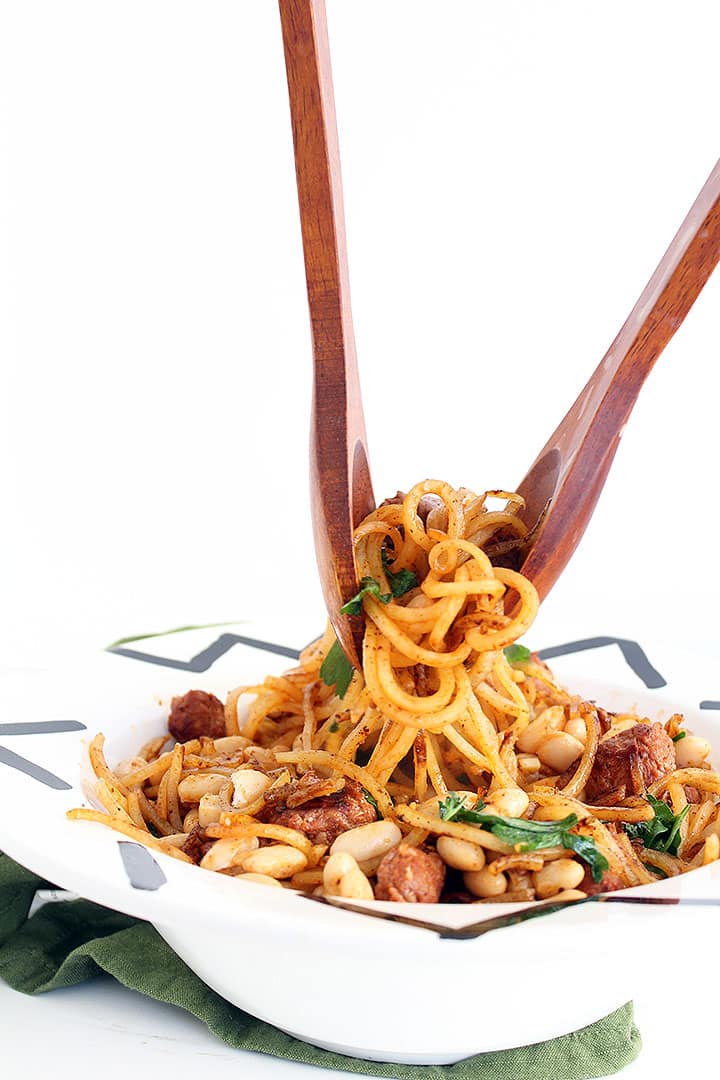 The spiciness can be kicked up a notch with a squirt of hot sauce or some crushed red chili pepper flakes, if you’re into spicy foods.

Also, don’t let the potatoes turn you off if you’re on a low-carb diet – just swap zucchini noodles in for potato noodles. You’ll fall in love with this dish, just as Lu and I did. 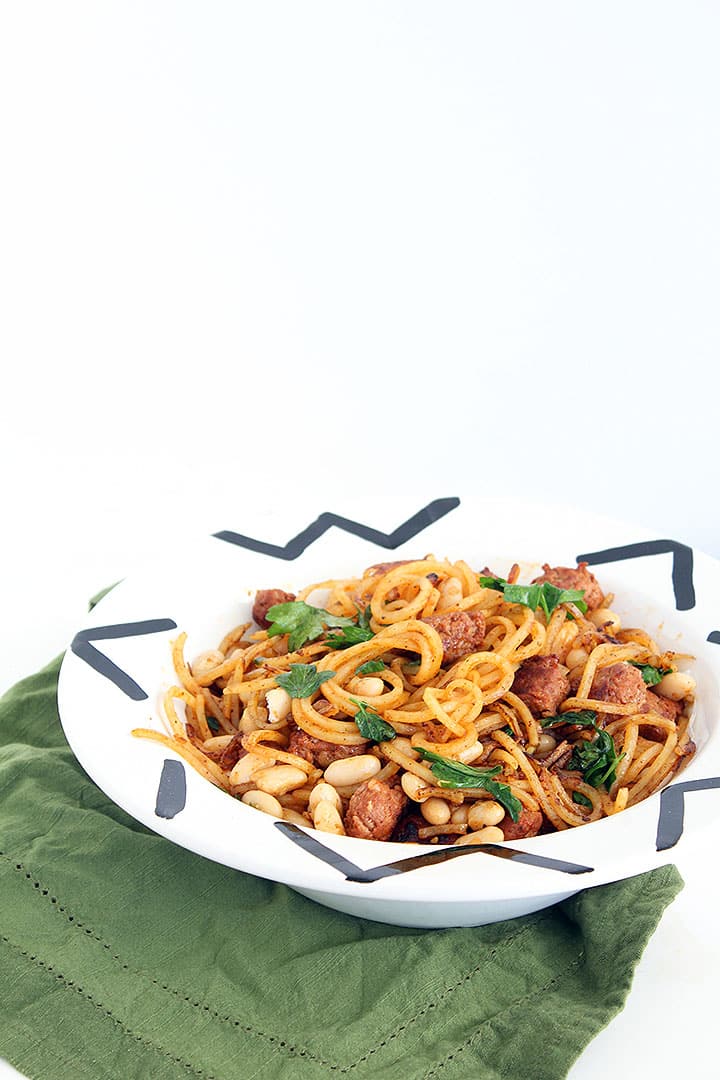 Here’s a picture of me and the birthday boy last weekend, in Beacon, right after stuffing our faces at that restaurant: 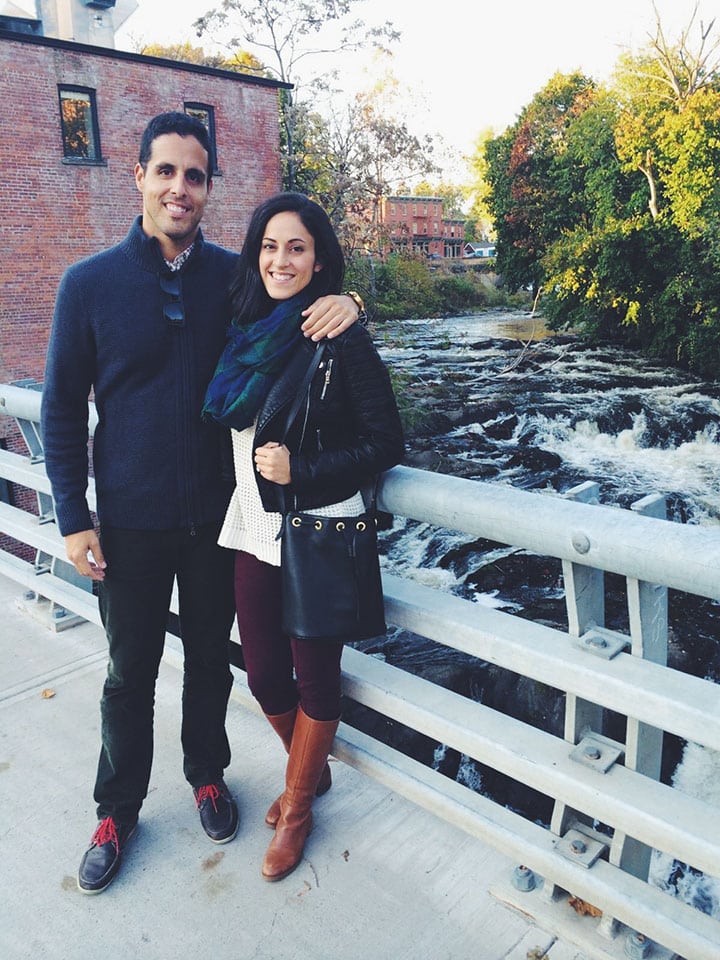 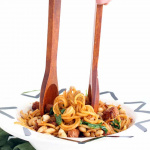 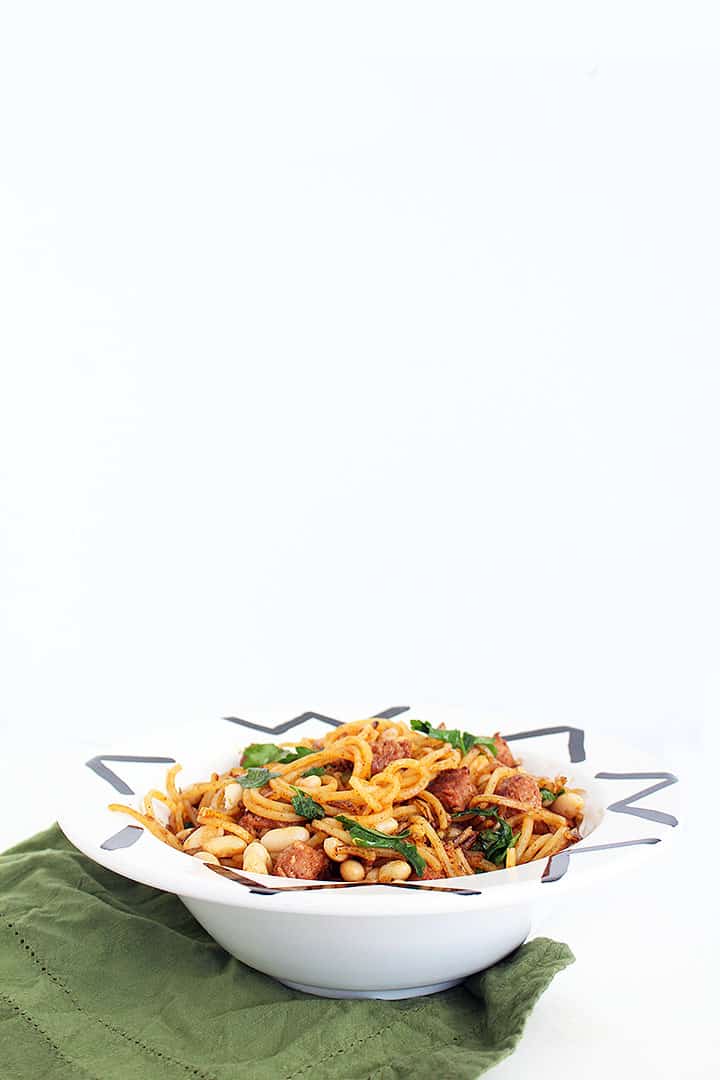 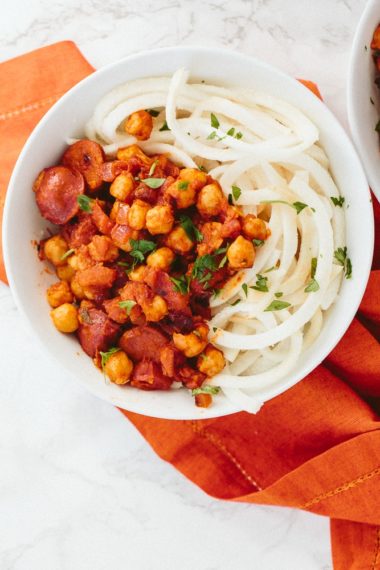 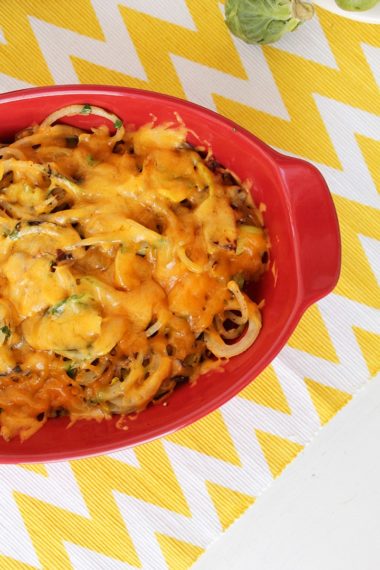 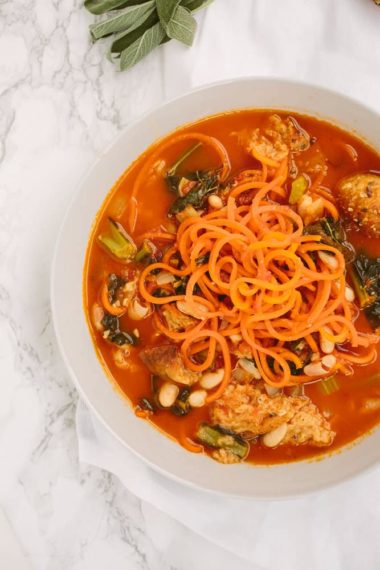 KarenW says:
October 30, 2014 at 1:07 pm
I would love to hear more about your journey! You are inspiring!
Reply
Karen says:
October 30, 2014 at 1:19 pm
I'm looking forward to hearing about your journey.
Reply
GBPL says:
October 30, 2014 at 1:21 pm
Inspiring! I need to utilize my spirializer seriously! Thanks for sharing your story!
Reply
Anonymous says:
October 30, 2014 at 2:00 pm
I need to get the gadget, I'm convinced. I have been receiving your emails for months, your inspiring
Reply
Nancy Dulaney says:
October 30, 2014 at 2:09 pm
Am loving these recipes! Have bought the machine, will try it for 1st time today. Exciting! My question is, do you see a way to use this approach with food not served immediately? In church outreach, I feed about 25 people -- the meal sits for a couple of hours till end of service, and I want to enjoy the service myself -- not fuss with food up to the last minute. Making ahead, freezing/ reheating also highly helpful. Congratulations on blessing the world with some terrific out-of-the-box thinking!
Reply
jesusan says:
October 30, 2014 at 2:11 pm
This dish sounds wonderful. I'm really glad you didn't put octopus in it, because that's something I'm not fond of… Happy birthday to Lu!
Reply
Anonymous says:
October 30, 2014 at 2:13 pm
What would I do differently if I wanted to use zucchini noodles? Where can I find your weight loss story?
Reply
Anne says:
October 30, 2014 at 2:34 pm
This looks so yummy and it's finally cooling off in SoCal this weekend so it's now on the menu!
Reply
Lindsay says:
October 30, 2014 at 2:53 pm
I would love a weekly blog post! I follow you on Instagram and love seeing your progress. Keep it up!
Reply
Lauren says:
October 30, 2014 at 3:34 pm
I can't wait to make this! Have you ever tried cooking with octopus? I'd love to try and make the original version, but have no experience with octopus and don't know how difficult it is to cook.
Reply
Lise Rousseau Silva says:
October 30, 2014 at 6:43 pm
Am enjoying lurking on your site and awaiting my own spiralizer! in the mean time, in more than one recipe you refer to chorizo...are you meaning the Portuguese sausage or the Mexican one? Thanks for the inspiration.
Reply
Alissandra Maffucci says:
October 31, 2014 at 1:19 pm
I use Spanish chorizo brand, but any type of spicy chorizo will work!
Reply
cindy rogers says:
October 30, 2014 at 7:07 pm
This looks delicious. I wonder how it would taste with sweet potatoes? I'm thinking it'd be divine.
Reply
Jennifer says:
October 31, 2014 at 1:30 am
Looks delicious! What is a substitute for the white beans? I'm not a fan of them.
Reply
Alissandra Maffucci says:
October 31, 2014 at 1:18 pm
You can use another type of bean or perhaps add corn!
Reply
Angie Bennett says:
October 31, 2014 at 3:14 am
I can't wait to try this one! Love that bag!
Reply
[email protected] says:
October 31, 2014 at 4:05 pm
lovely photo of you two! I also cannot wait to make this dish! Potatoes are my weakness- And chorizo yum. I am Portuguese and that dish with the octopus totally reminds me of something my family would make!
Reply
Kodomojanai says:
November 17, 2014 at 3:52 am
Hi. I've been trying your recipes and this is the first time I'm attempting this recipe. I'm not that great at cooking and so need a fair bit of extra guidance. How do I tell if the potatoes are cooked through? Are they not supposed to be crunchy anymore? I'm eating a few bit and even the smaller pieces are still crunchy after the 5-7 minutes prescribed above.
Reply
Diane R says:
December 4, 2014 at 6:53 pm
I just tried this tonight. Loved it, but next time I would use loose sausage and sweet potato. I found the white potato a bit bland with the white beans.
Reply
plasterer bristol says:
July 23, 2015 at 11:52 am
this is a great recipe. top marks, Thanks for sharing. Simon
Reply
Reeya says:
July 31, 2015 at 1:05 pm
I've made this twice now, and it is absolutely delicious! My only recommendation is to increase the number of potatoes to 2, as it does feel a bit more like a stir fry than a "noodle" dish
Reply
Woody Joyner says:
March 7, 2016 at 5:17 pm
Great recipe. Added 1 medium red bell pepper, spiralized and trimmed to the potato noodles for some added color. Looked awesome on the plate.
Reply