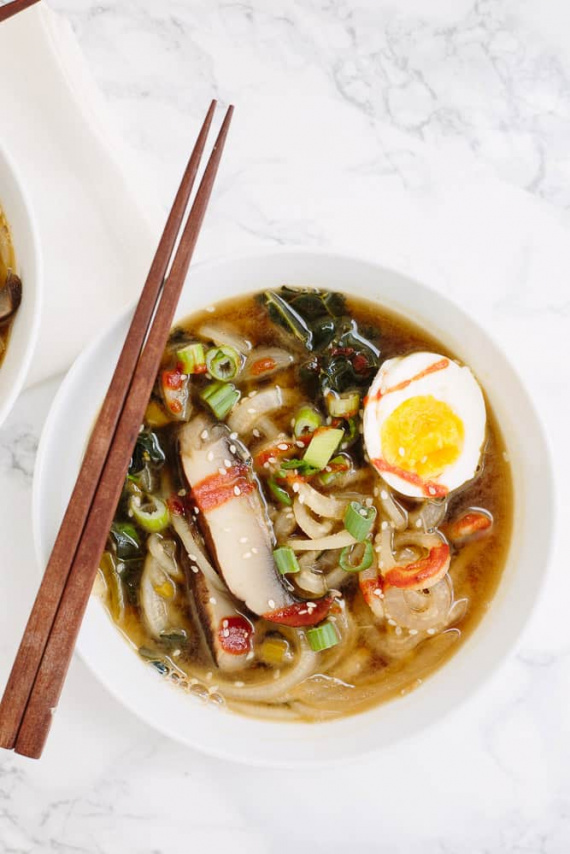 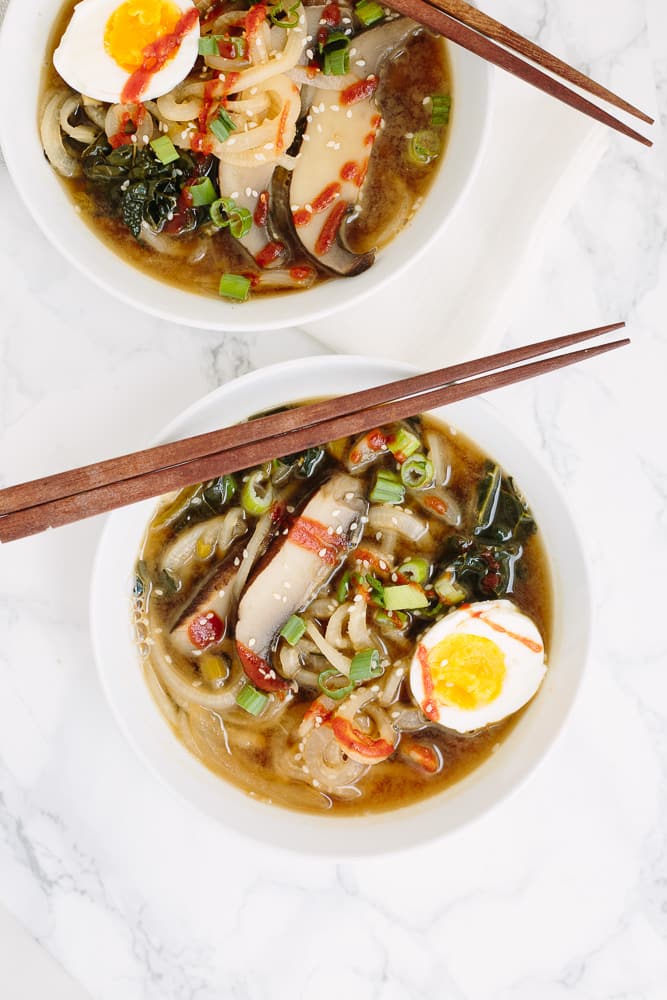 It’s my first non-vegan recipe in 31 days! Alas, our vegan month of March is over, and it’s back to an omnivorous Inspiralized blog.

Don’t fret, if you’re vegan, as you know, I often post vegan recipes. I’ll always lean more towards the veggie side than the meat side, so many of my recipes are vegan or easily modified to be vegan.

But for those of you who love meats and cheeses…. we’re back! 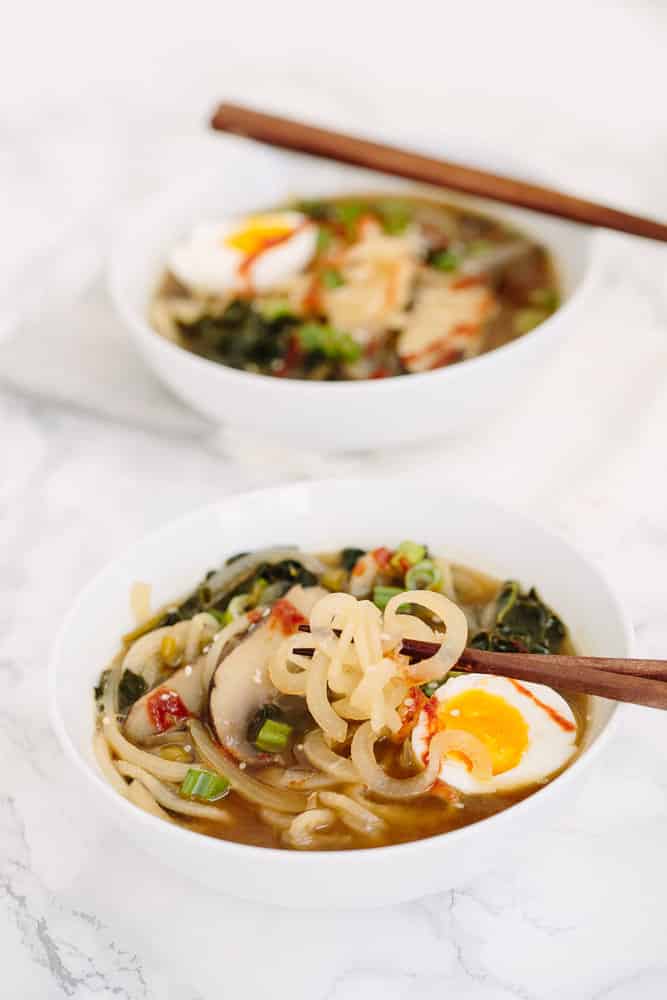 Real quick about this recipe: if you’ve never thick-sliced portobello mushroom caps and simmered them in a soup like this one, you haven’t lived. Okay, well maybe not that dramatic, but seriously – especially for my vegetarian friends, these mushroom slices are steak-like and so satisfying!

This ramen is made with daikon noodles which absorb every single flavor in the soup, so they’re the perfect noodle. They have a slight crunch, but you can cook them even longer to soften them up even more.

As for the broth, it’s simple – it’s flavored with garlic, ginger, and onions and then topped off with soy sauce for that salty, umami flavor. You don’t need much more than that – it’s kind of like my theory on olive oil, salt and pepper – it’s ALL you need. Seriously, so much flavor comes from allowing the ingredients (ie veggies) to speak for themselves, rather than smothering them in a sauce or thick condiments.

If you can’t find daikon, zucchini will work really well here. And if you’d like to thicken it up a bit more, add an extra egg and use potato noodles. You can also fully boil your egg, if you don’t like soft boiled.

Now, I wanted to talk briefly about my vegan month. Yes, this blog was vegan for the entire month of March. I was so excited to go vegan, because I had been toying around with the idea of going back to veganism (I was vegan for 2 years starting in 2008.) I was thinking about this, because I missed the guidelines. I missed being able to resists certain foods that wouldn’t make me feel good because I was “vegan.”

However, what I’ve realized is that now, later in my life, veganism just isn’t right for me. Now, before you vegans say, “Veganism is for everyone!” let me tell you that I’m living proof that veganism isn’t for everyone. 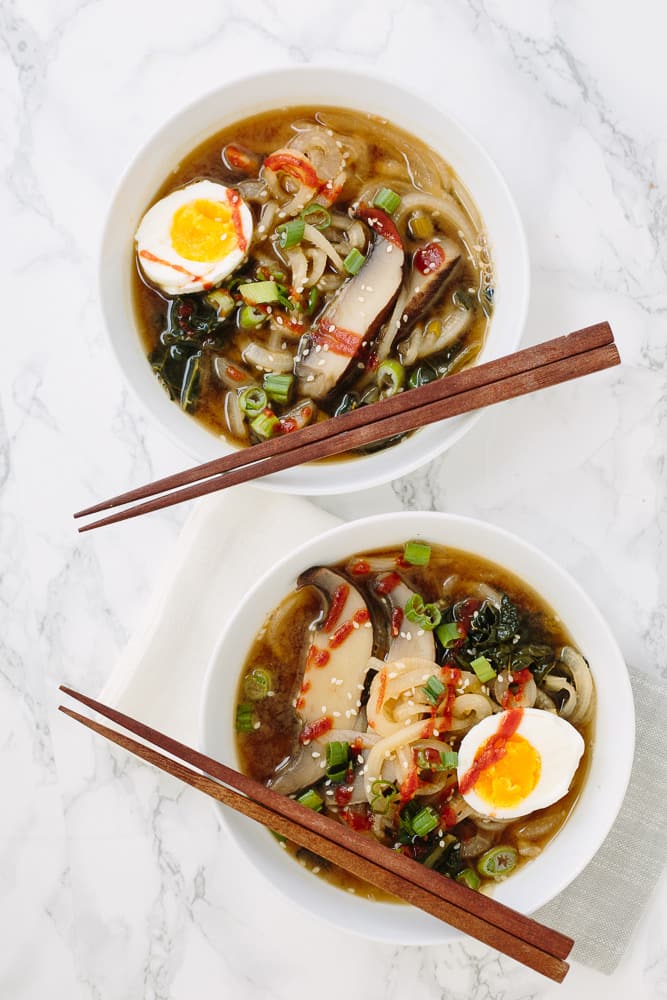 Why isn’t it for me anymore? Well, the issue for me with veganism, is that it forces me to restrict myself meaning, there are certain foods I “can’t” have. This isn’t a good mentality for me – it causes too much anxiety. It causes me to think way too much about what I’m going to eat and then, ultimately, I lose sight of what makes me happiest: food and cooking! I have to carefully plan out what I’m going to eat.

Along the same lines, it encourages that concept of “restriction” which to me, can lead to unhealthy eating habits and behaviors. For example, one night, I felt like I hadn’t had enough to eat that day (even though I probably ate near 1,800 calories that day that consisted of fruits and veggies, sweet potatoes, lentils, nuts, avocado, quinoa, cruciferous veggies, and whole grains) so I had to skip the gym – I just didn’t have enough energy and I felt consumed by my hunger. I ended up over-eating that night: almost a full tub of almond butter!

And yes, I know that, as time goes on, veganism becomes second nature (after all, I was once a vegan and I get it!).

Also, I’m constantly out for food events or occasions in New York City. I’m going to some of the most amazing restaurants in the world and I want to immerse myself in the experience. If I want to have wine with some dover sole, I shouldn’t have to overthink it. I love to taste the food of other chefs, it inspires me – and it’s something I enjoy and brings my happiness.

To be totally honest, I didn’t really feel much of a difference in my body on this vegan month. What I realized is that I eat vegan most of the time! There’s no need to get 100%, full-throttle vegan, when I can incorporate the principles of veganism into my balanced, omnivorous diet. Besides, everything that is NOT vegan isn’t “bad” for you, just like everything that IS vegan isn’t good for you. I mean, fried hush puppies are vegan but that doesn’t mean I’m going to eat them – I don’t like fried food and I don’t eat it. 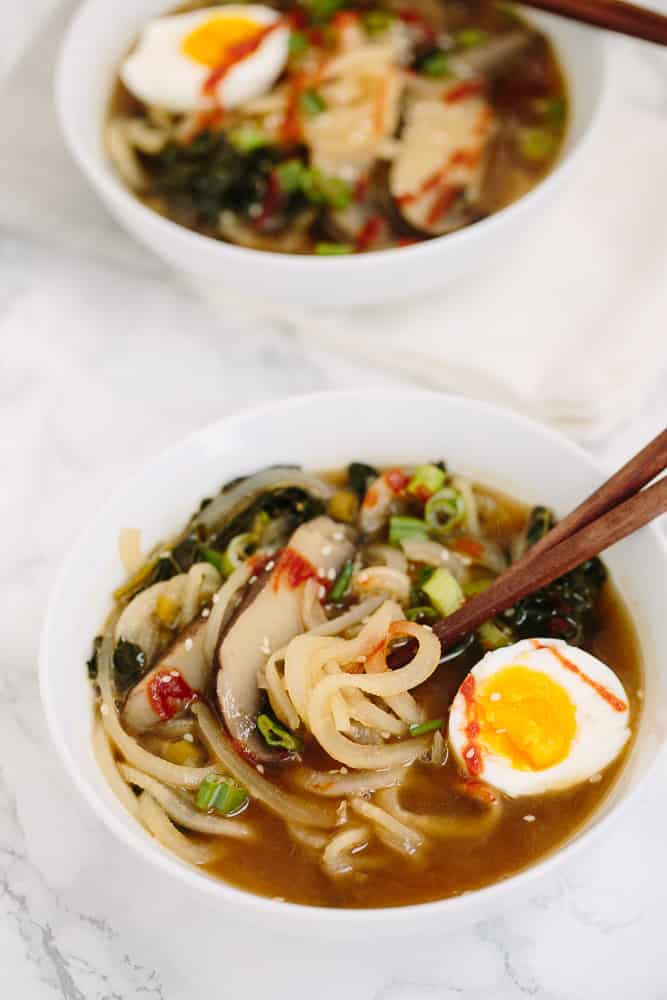 I just hate having to refer to “bad” and “good” when I eat. I just want to eat mainly whole grains and veggies, lean proteins, and have birthday cake with my friends, and if I’m at an amazing Italian restaurant, order the sausage rigatoni. Ya know? I want to live, but feel my best – and I’m happy to have found that place of balance and moderation.

I will tell you this: after going vegan again, I’m going to solely purchase organic, farm-raised, antibiotic and hormone free meats. And I am going to be much more conscious of my dairy intake. It’s always been pretty low, but the sweets are what get me – and make me feel lethargic and bloated afterwards.

At this point in my life, veganism isn’t for me. HOWEVER, that’s not to say that later in my life, when I’m not running . Actually, the other day, Lu asked me, “When you’re pregnant, are you going to be vegan?” Ha… getting a little ahead of ourselves, aren’t we? 😉

Who knows, but for now, I’m happy with my approach to healthy eating that works for me and nourishes my body. 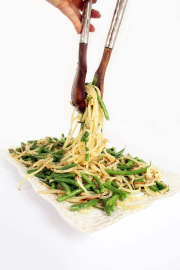