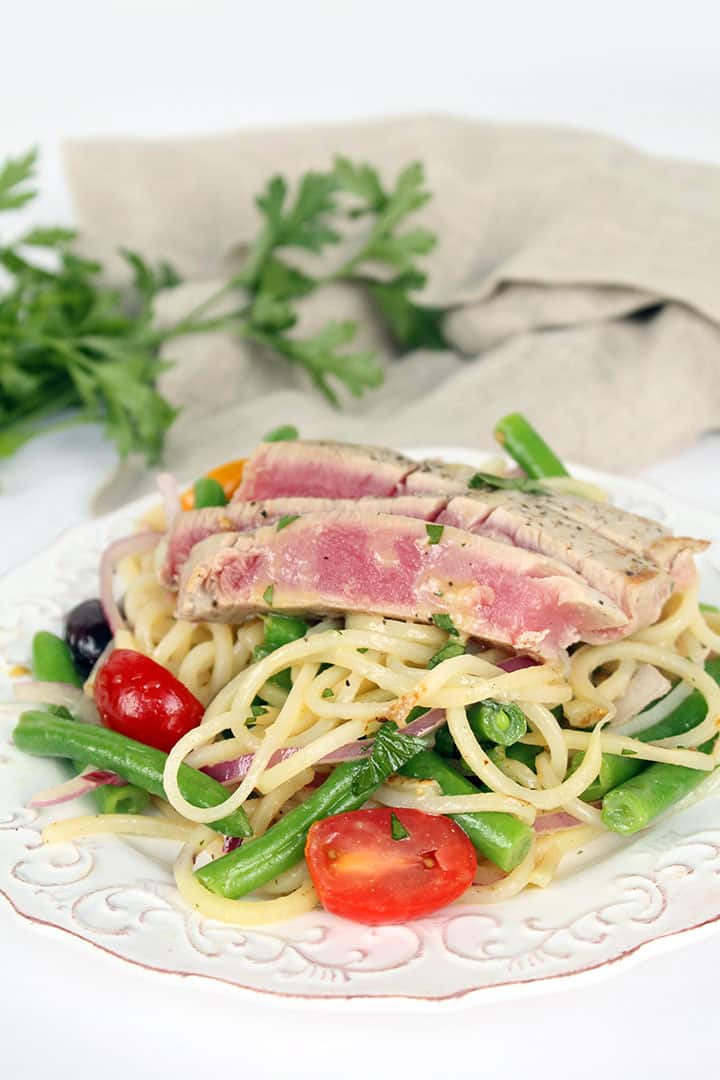 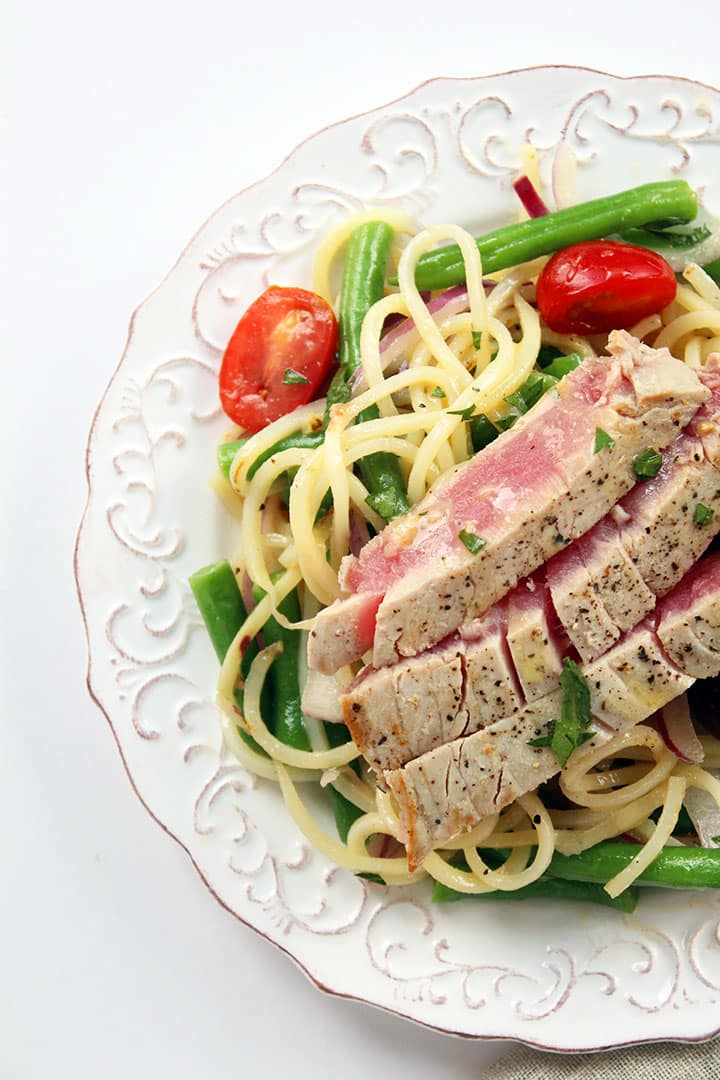 Funny story about this recipe. Besides being epically delicious, it’s missing one main component of a nicoise salad: a boiled egg.

ARGH! After I photographed this dish for the post, I realized I had forgotten to top the salad with the boiled egg. Once I realized it, I had already tucked it neatly away in the refrigerator in a glass container for leftovers.

So, today’s recipe is written with a hard boiled egg, BUT, there’s no egg in the pictures. You’ve got a good imagination, right?

I felt so silly, I even took a picture of the hard boiled egg afterwards: 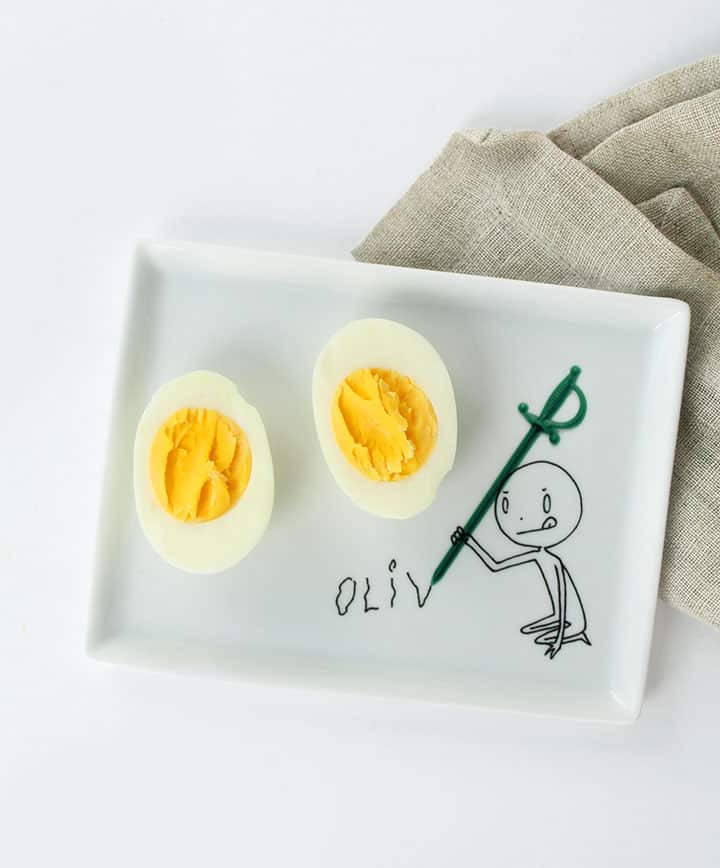 Ha! The silver lining? I have leftover boiled eggs for snacks this week! Boiled eggs are really versatile – you can throw them with some dijon mustard and Greek yogurt and make a quick egg salad. Or, you can mix chopped boiled eggs in a bowl with a little avocado, a drizzle of lime juice and some salt and pepper and enjoy it smeared over toast.

But today’s recipe isn’t about this missing boiled egg – it’s about eating creatively, yet healthily. I’ve always loved tuna nicoise salads – they just have so much to them – tuna, egg, green beans, salad, potatoes, olives. They’re really one of those “I’m in the mood for every flavor possible” dishes. And I’m always in that mood! 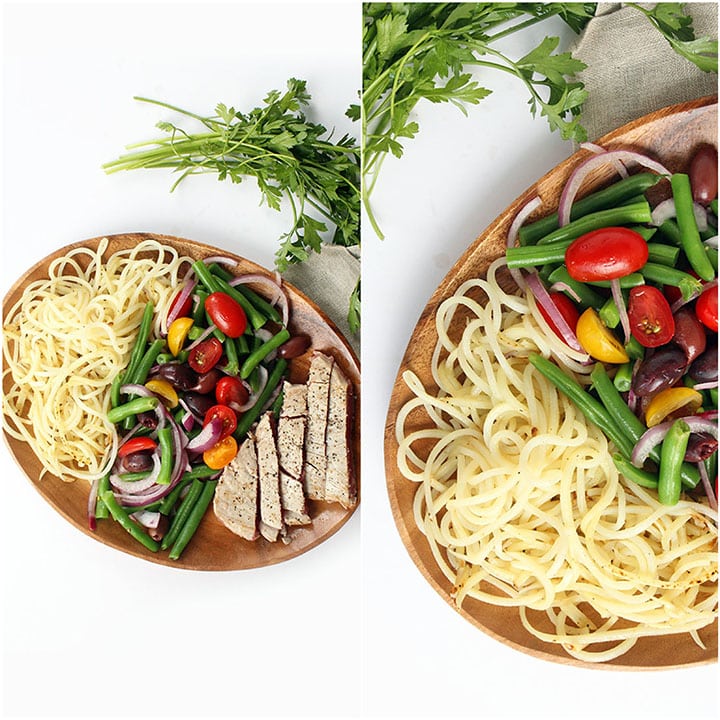 Typically, the potatoes in tuna nicoise salads are cubed and either boiled/steamed or roasted. BO-ring! We know better than that, here at Inspiralized. Gosh, I’ve been spinning too much, I sound like my spin instructor – “you can do better than thaaaaaaat!!”

Spiralizing the potatoes helps add extra flavor – I simply seasoned them with salt, pepper and garlic powder, but you could add any spices to the potatoes (like chili powder) to give them an extra oomph. 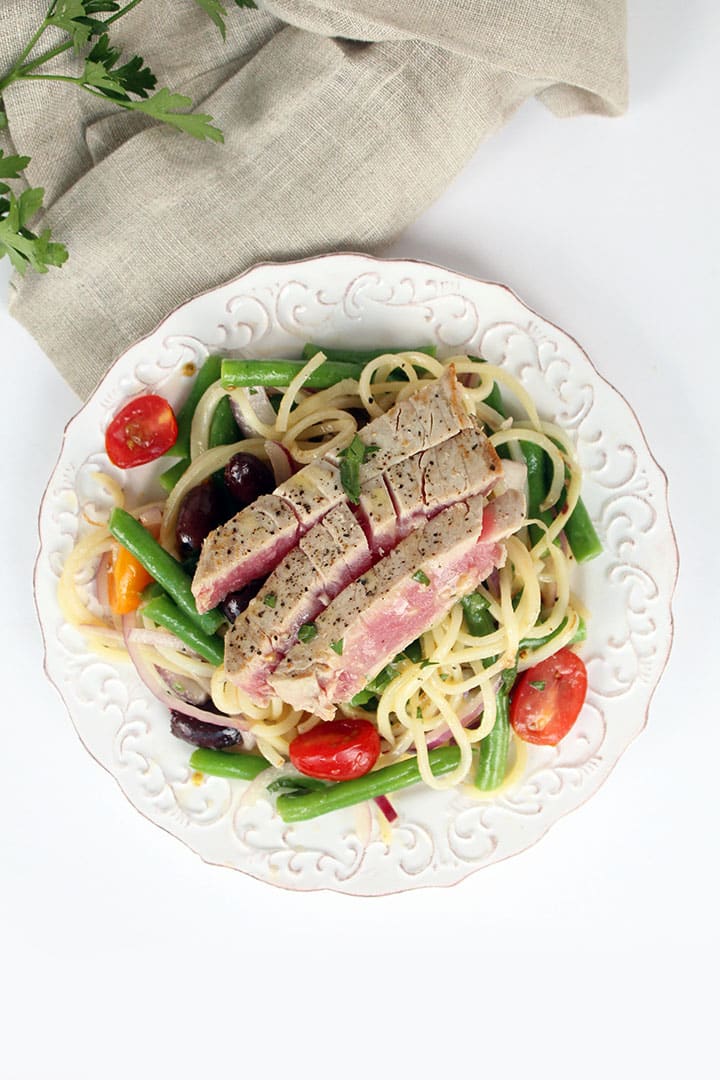 When you eat the potatoes as noodles, you eat them slower and not as much (a spiralized potato yields a lot more noodles than a cubed potato yields cubes, if that makes sense.) Plus, you’re eating a noodle salad, not a chopped salad, which, is WAY cooler. 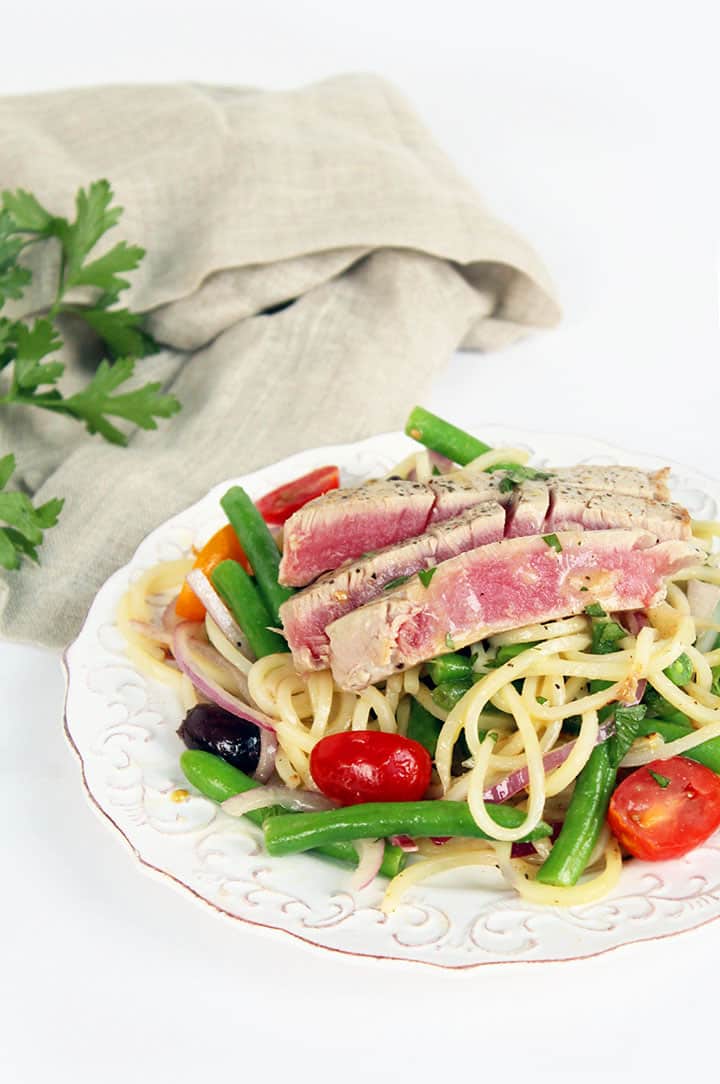 This tuna is shown as lightly seared, but if you’re not a fan of the rare stuff, just sear it an extra 2 minutes on each side to get a well-done tuna. If you don’t have access to fresh tuna at your local market, substitute in canned tuna instead – it does the trick.

Make sure you get white albacore tuna (it packs three times more omega-3s than light tuna!) A note about canned tuna (especially white albacore): eat it in moderation, it has higher levels of mercury, as albacore tunas are generally larger fish. I like Wild Planet Wild Albacore Tuna (in water.) 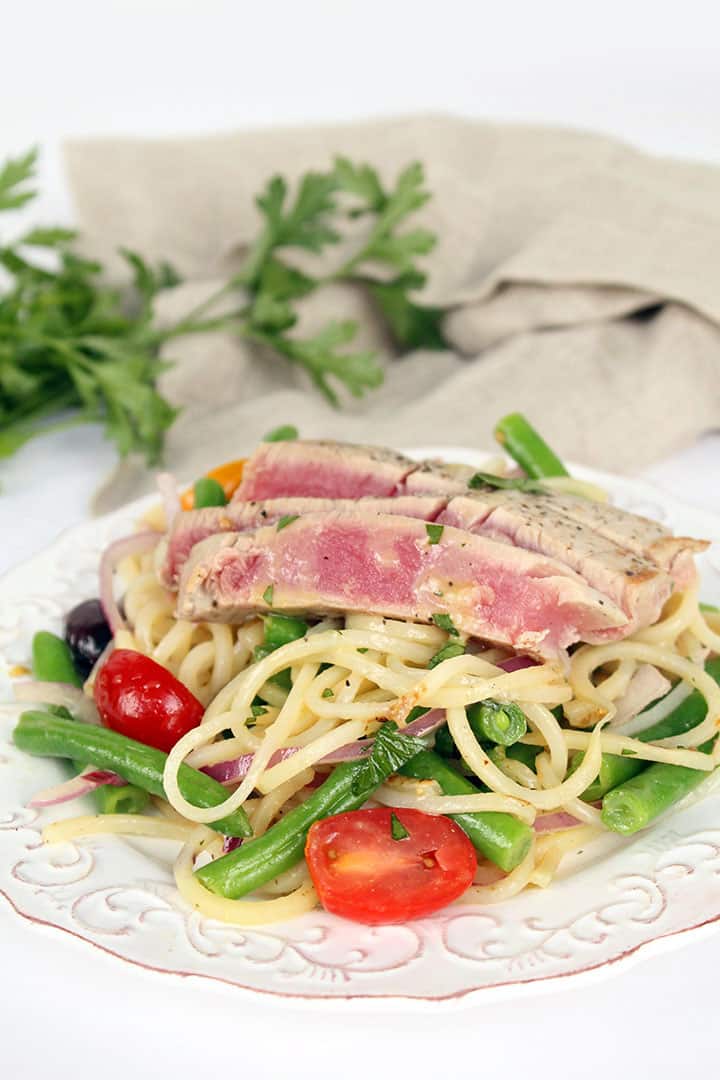 Plus, this salad originated in Nice, France and if you don’t know already, I’m obsessed with everything French. I took French for almost 10 years and I even went to Montreal for French immersion camp when I was younger. Nerd alert! 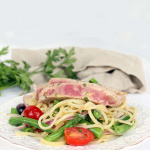 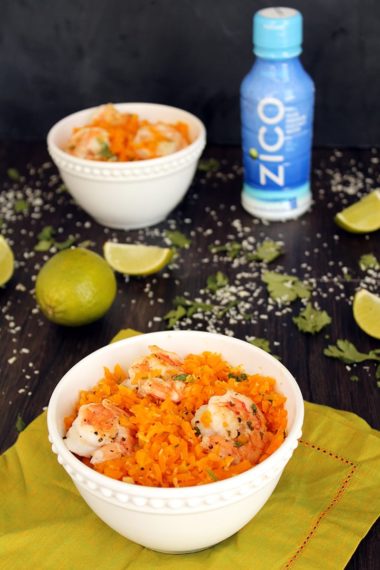 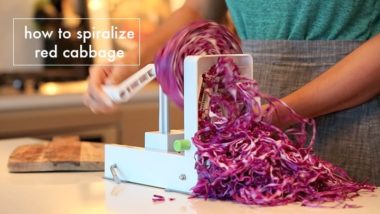 How to Spiralize Red Cabbage 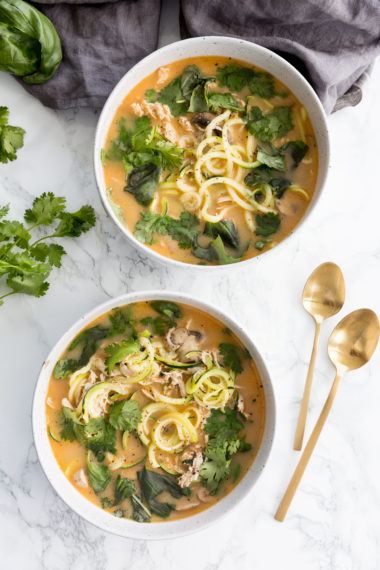 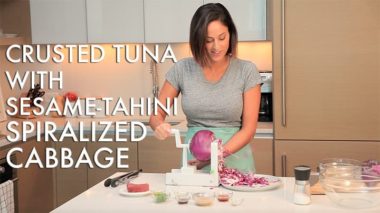