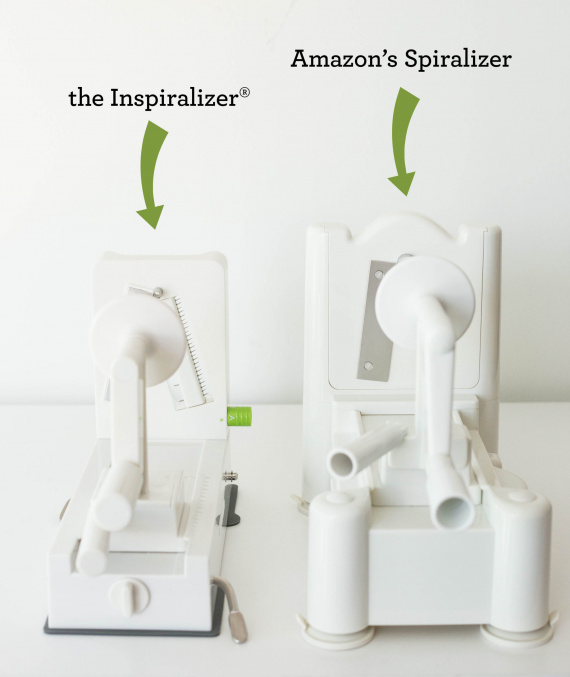 What Is The Difference Between the Inspiralizer and a Spiralizer?

Spiralizing Tips & Info
What is “the” spiralizer? First, let’s talk about the spiralizer. First off, the word...
share this post

What is “the” spiralizer?

First, let’s talk about the spiralizer.

The person/company that sells “The Spiralizer” on Amazon just was savvy, saw the trend, and trademarked the word “spiralizer” before it was well known (like the word blender) so that they could be a top seller on Amazon. Their entire business is on Amazon.

However, there is not one “Spiralizer.” The person who sells “the Spiralizer” on Amazon wasn’t even one of the original “brands” of spiralizers, they popped up about 1 year and 2 months ago. There are many spiralizers out there. On Amazon, there are a lot of individual sellers selling very cheaply made “knock-offs” of some of the original spiralizer brands, like Paderno and Benriner. Then, there are bigger brands, like Cuisinart, OXO, and KitchenAid, selling their own (which, are definitely better quality than what you’ll find on Amazon.)

As far as the Internet is concerned, back in 2013 when I started this blog, the spiralizer was originally used in the raw vegan circles. If you’ve ever heard me share my story about how I started Inspiralized, you know that when I looked online, I searched “spiralizer recipes” and only about 3 recipes popped up, and they were all raw vegan. There were 2 or 3 spiralizers on the marketplace, the Paderno and the Benriner.

Actually, when I first started Inspiralized, I was using the Paderno 3-blade spiralizer. A few months later, I realized that the Paderno wasn’t doing what I wanted it to do: suction well, spiralize tough veggies like butternut squash without issues, fit compactly in my cabinets, be safe, clean easily, and of course, be easier to change between blades (I hated those clunky changeable blade cartridges!)

So, I set off to design and create my own, which became the Inspiralizer. Since March 2015, this has been the spiralizer that I have been using – I created it to be my “perfect spiralizer,” making improvements on all of the issues I had with the spiralizer I used to use. I upgraded myself!

So what’s the confusion?

Many people go on Amazon to purchase the spiralizer and they type in “spiralizer” or “Inspiralizer” and because everything is white plastic, they all look the same, and one is literally called “The Spiralizer.” Tricky! Now, I’ve included my logo above my product in my product listing on Amazon so people will know that they’re buying the real-deal Inspiralizer.

Also, Amazon often pairs my cookbooks with another spiralizer listing on Amazon, which can be confusing, because it looks like that spiralizer is part of the Inspiralized brand. For example:

This is very, very wrong! The only product I sell is the Inspiralizer, Amazon’s algorithm just loads that way.

What’s the difference between the Inspiralizer and the Spiralizer?

I am so, so glad you asked!

I’m also so bummed when people decide to save $5-$10 only to buy a product that won’t spiralize very well, offers a dead-end “help line” and is just a company that isn’t a real brand and just wants your money. That’s NOT what Inspiralized is about.

The Inspiralizer is smaller and more compact

The difference between sizes is apparent. The Inspiralizer is sleek, compact, and designed to fit in even the smallest of cabinets! 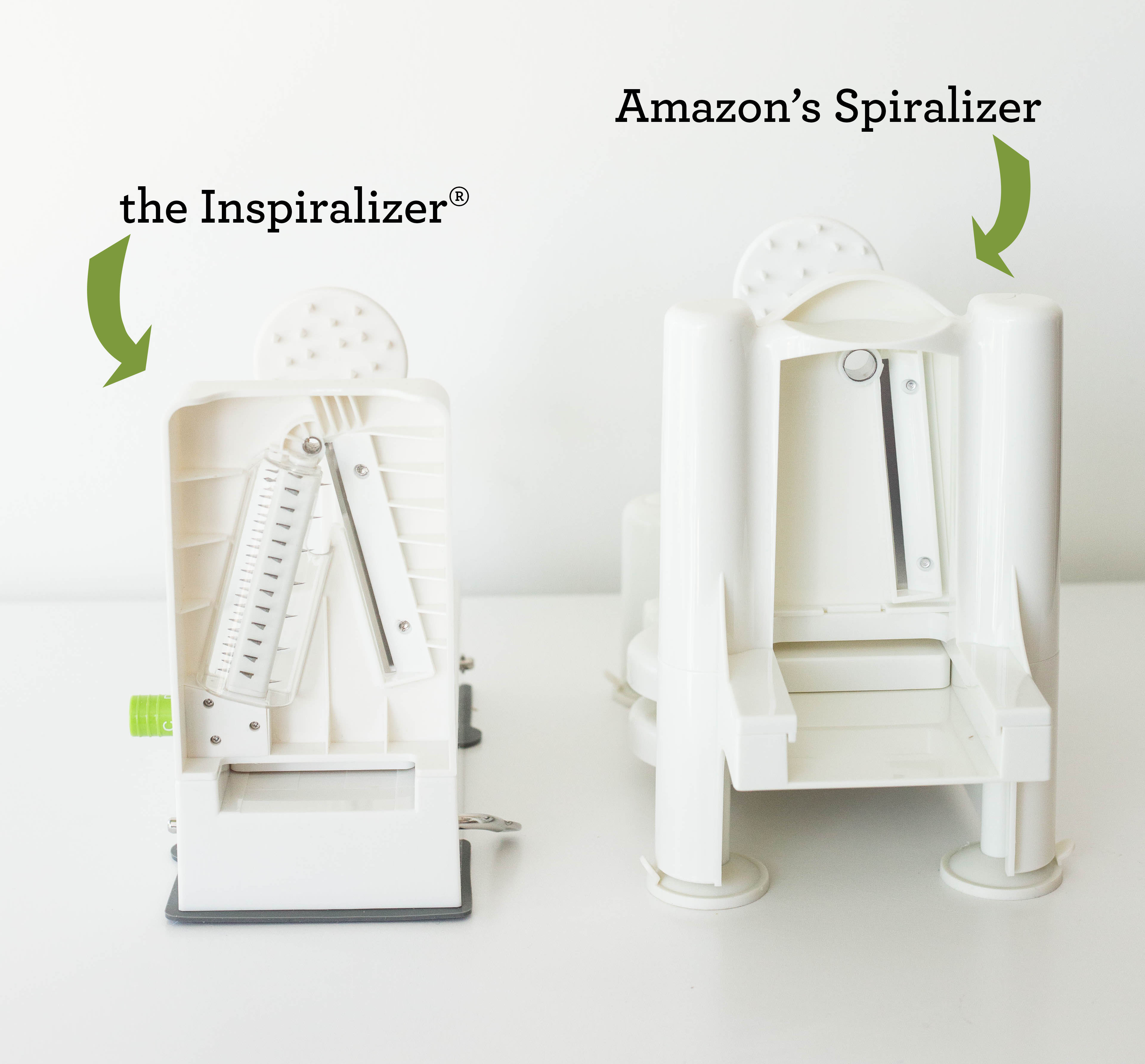 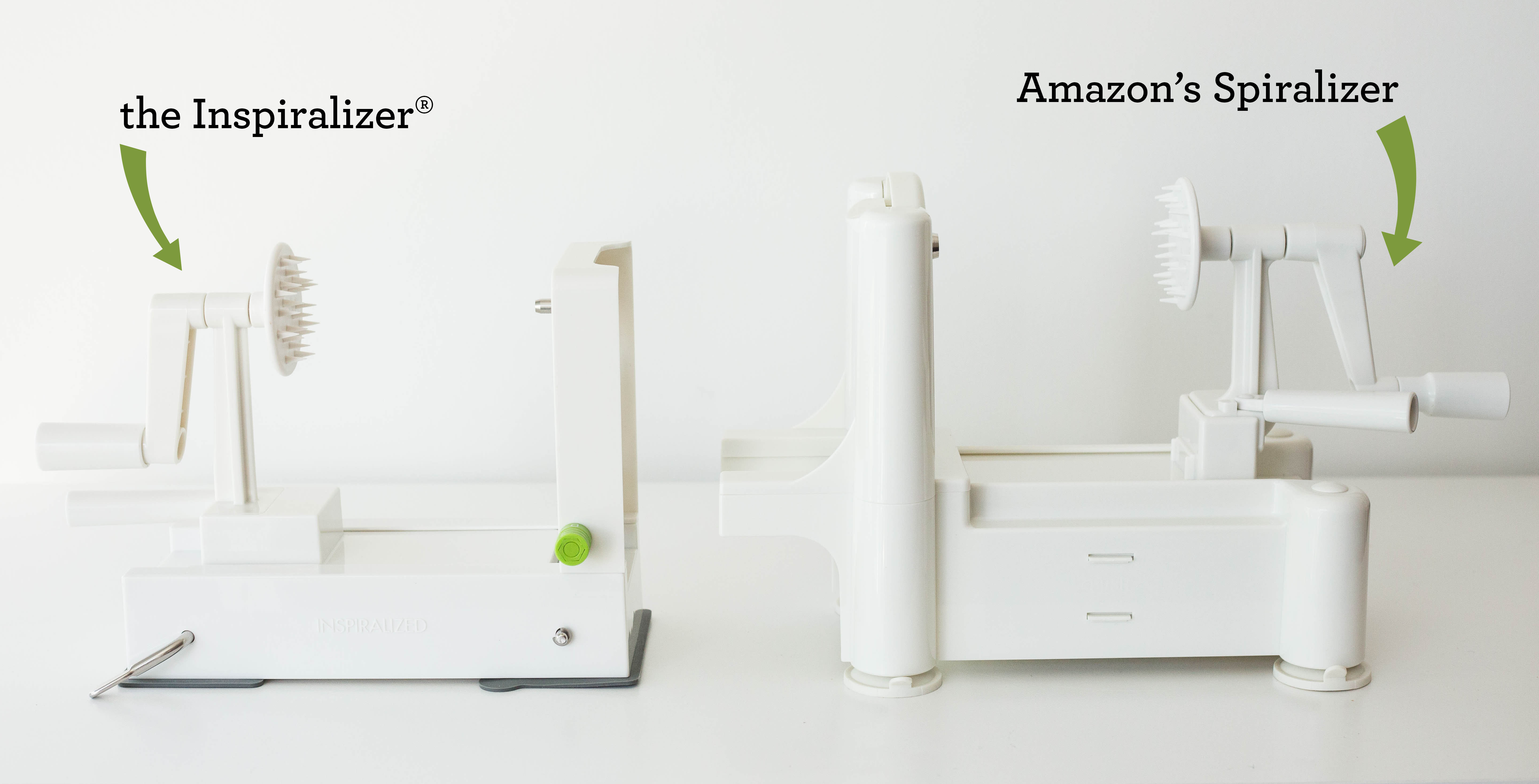 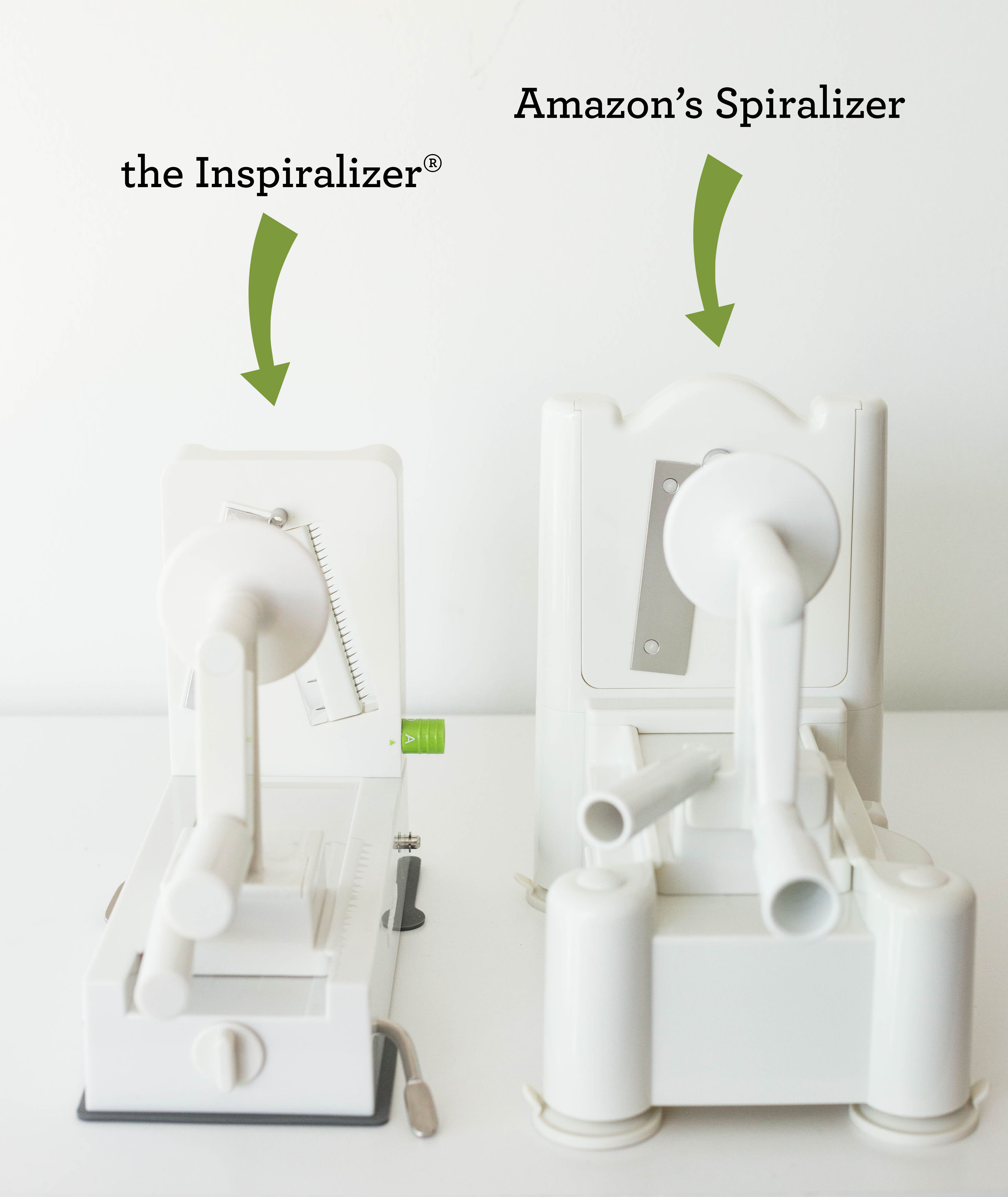 The Inspiralizer has superior vacuum based suction (no unreliable suction cups!)

Probably my biggest gripe with the first spiralizer I was using was the suction. It always came loose – those suction cups just can’t handle the pressure when spiralizing big root veggies, like rutabaga and sweet potatoes! The Inspiralizer slices effortlessly through tough veggies, thanks to the vacuum based suction levers on the bottom! 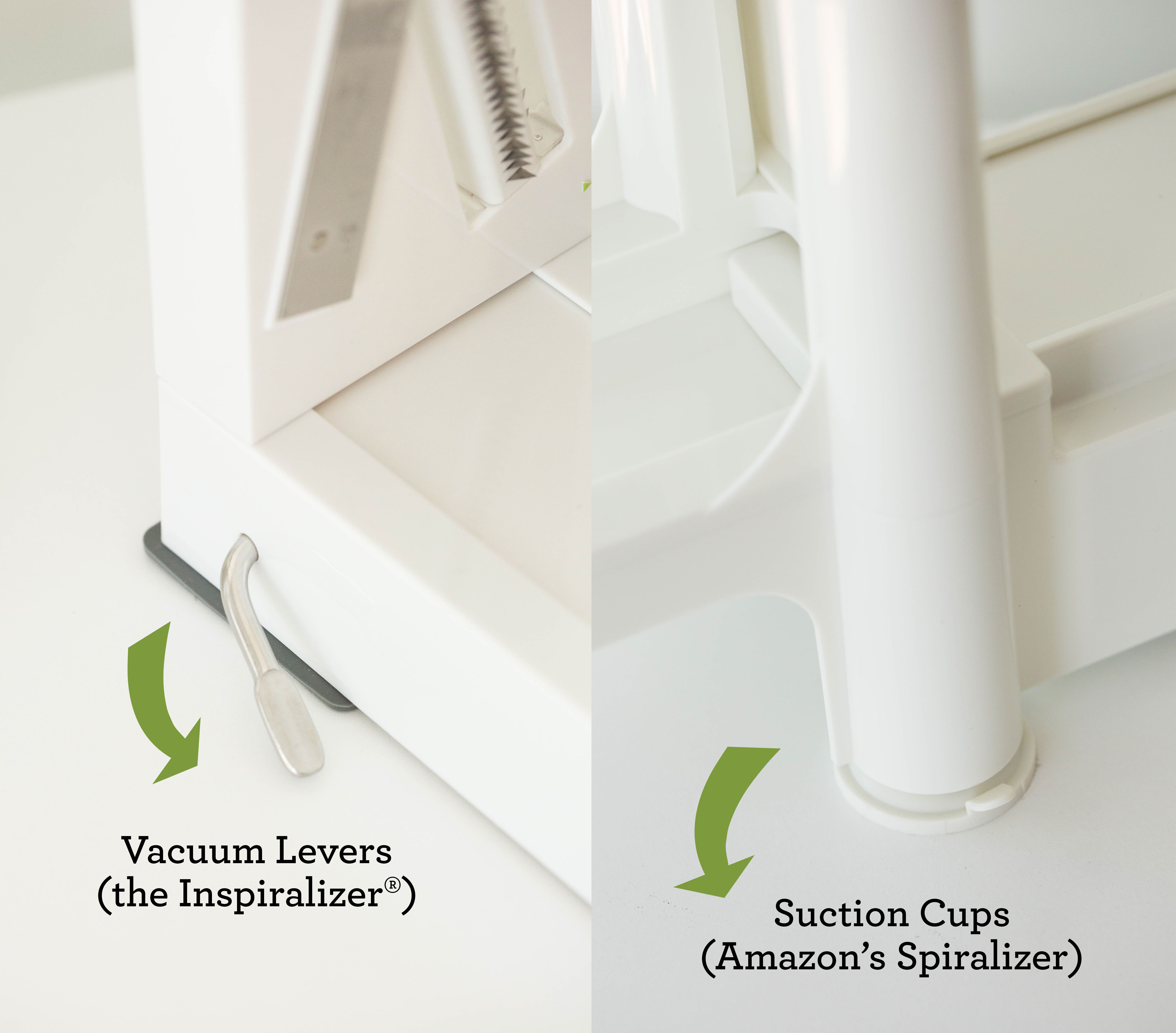 The Inspiralizer’s blades are changeable with a green knob, no need to change blades manually

There are no clunky blade “cartridges.” When you want to change your noodle shape, all you have to do is just twist a knob! Seriously. You’ll never lose a blade, because it’s impossible! They’re all neatly contained within the Inspiralizer, and conveniently labeled A, B, C, and D and correspond with the recipes here on the blog and in my cookbooks. 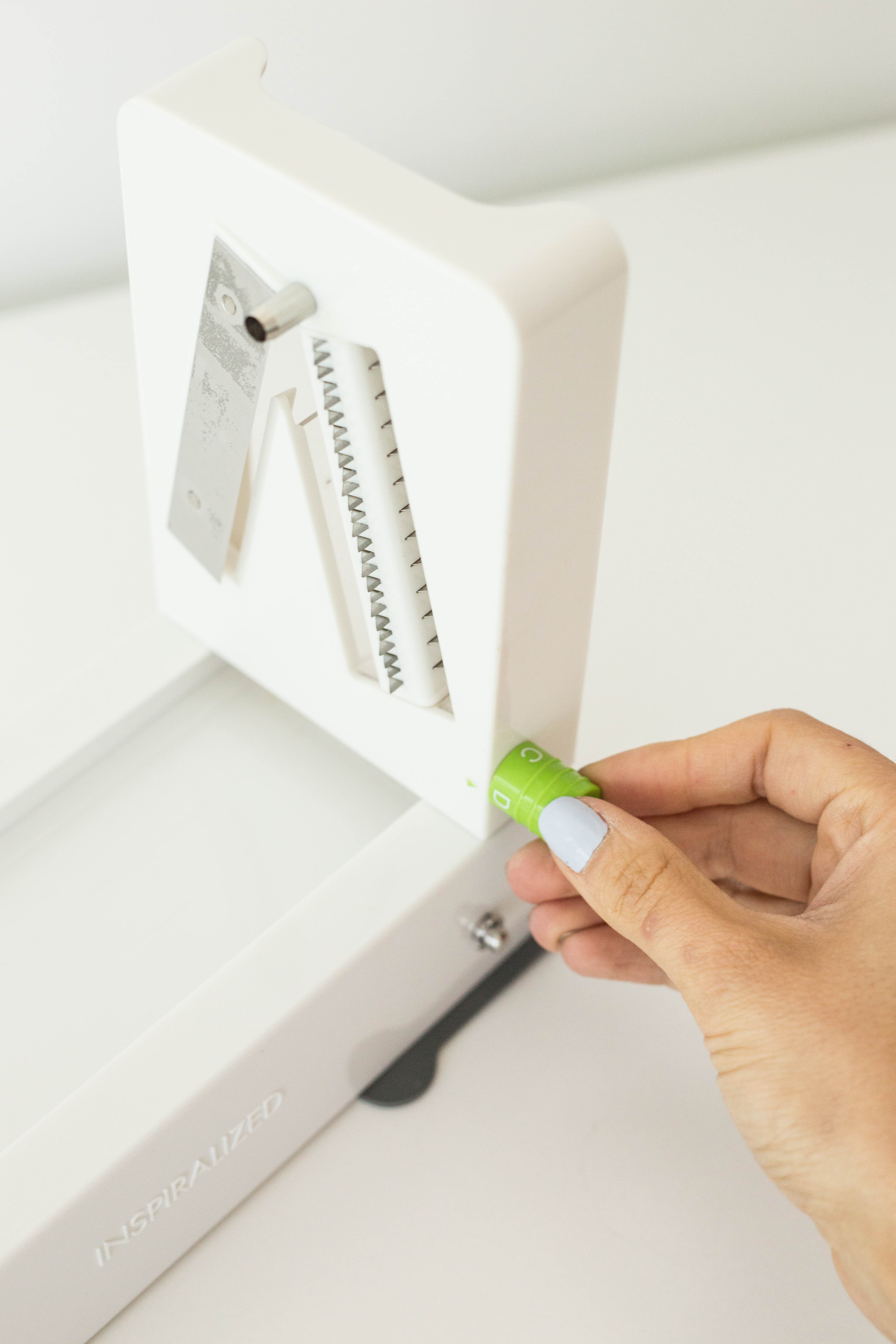 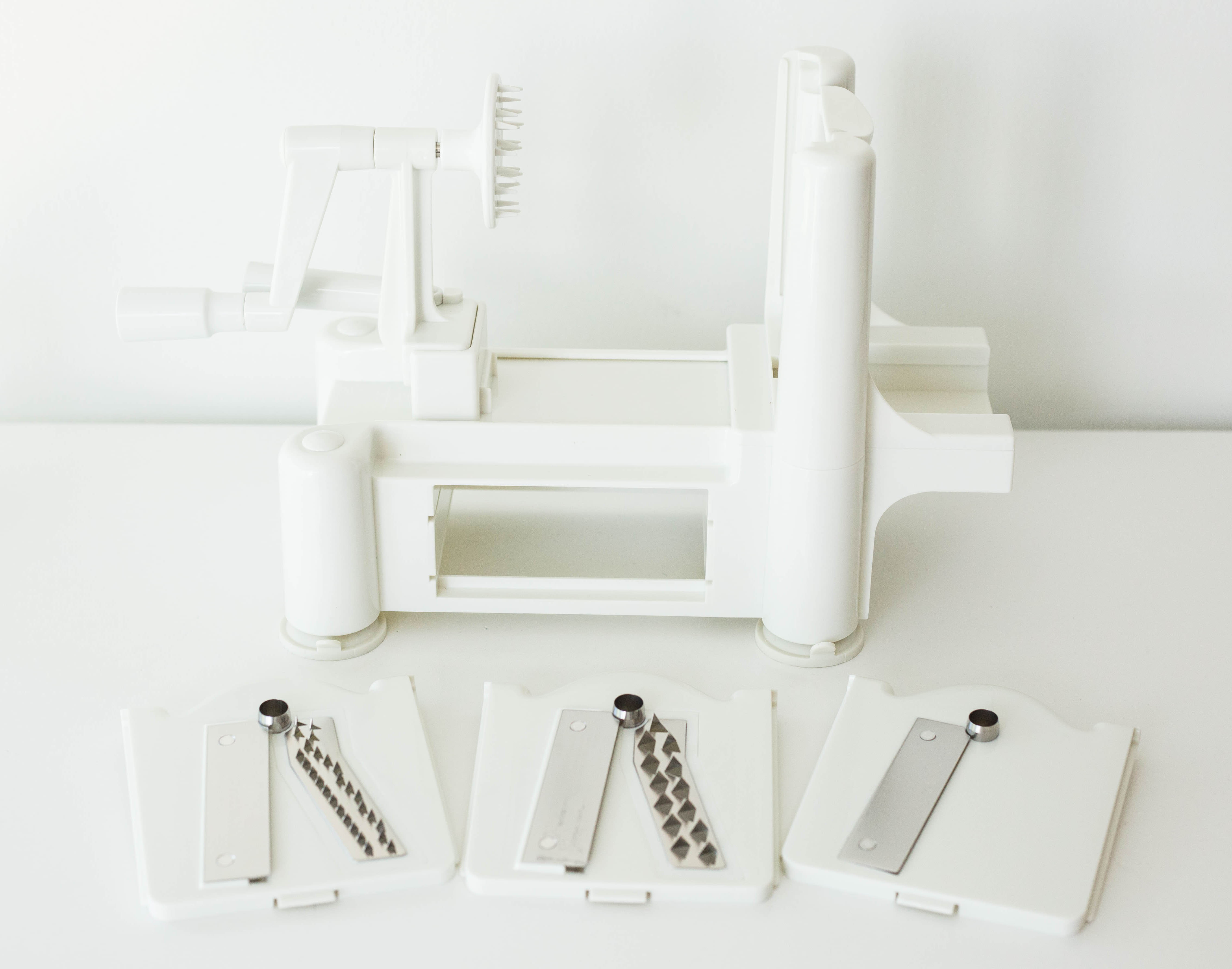 The Inspiralizer’s handle’s teeth are sharper, better for securing to tough veggies

I designed the teeth on the handle to come to a sharp point so that they’ll secure better into the vegetable you’re spiralizing and stay put! 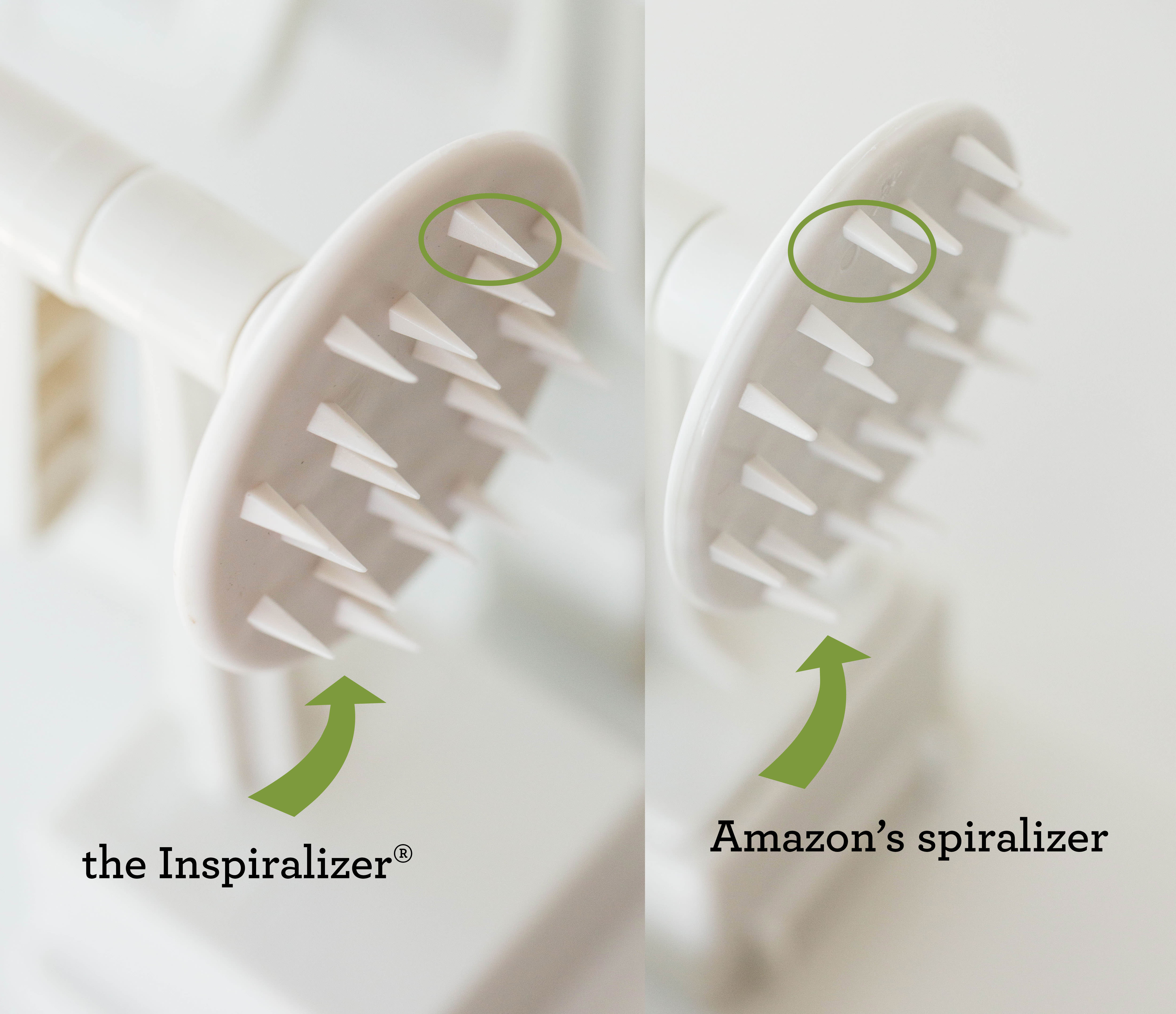 The Inspiralizer comes with a 12 page thorough manual

The Inspiralizer comes with a 12 page thorough manual in the box, but of course, it also comes with a full YouTube channel of tutorials and a welcome video with extra tips. The other spiralizer came with a one-sheeter with small instructions on how to use the product. Also, when we tested the e-mail address on the one sheeter, we never heard back. Also, when we called the “customer service line”, no one picked up and it rang forever. 🙁 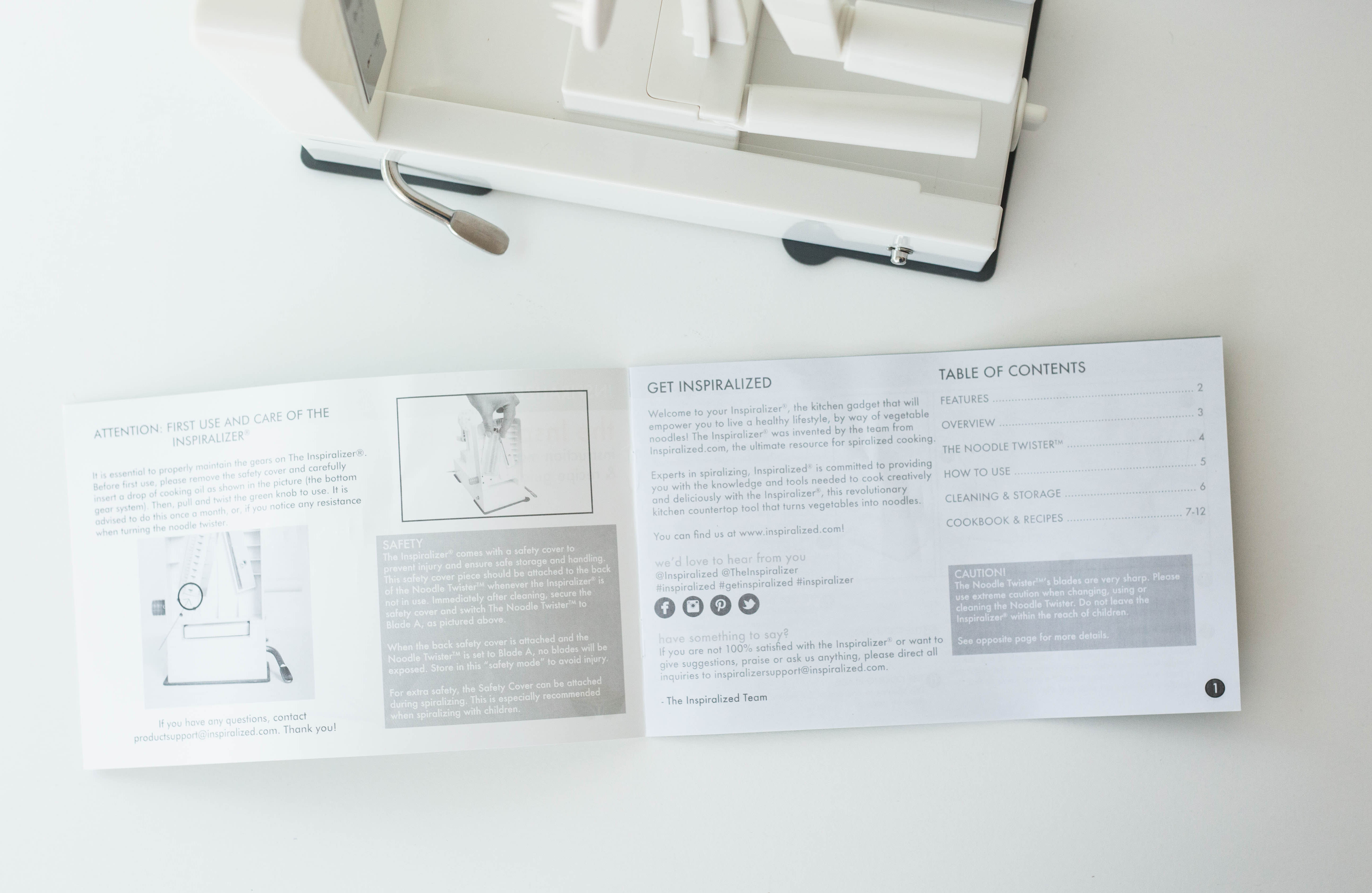 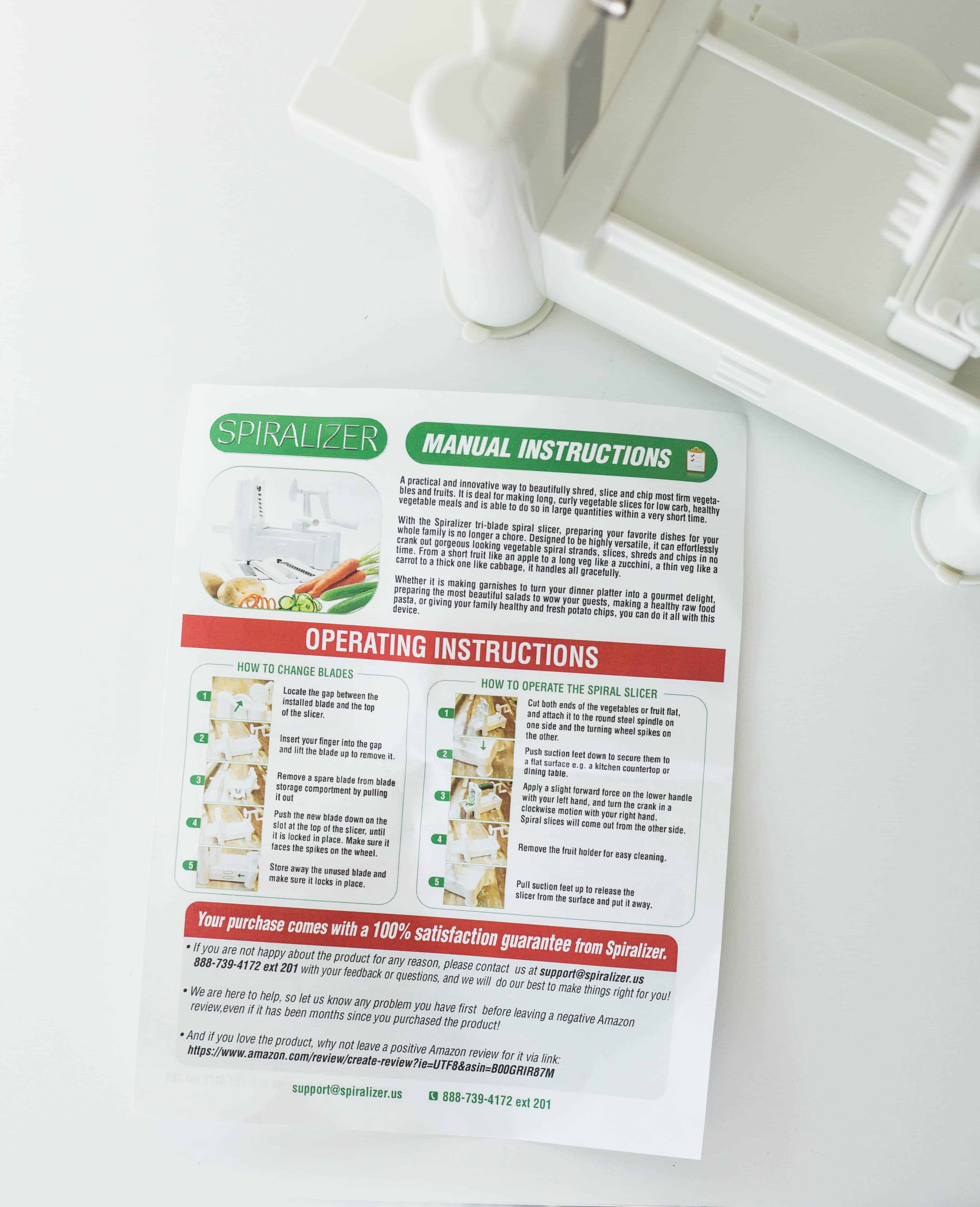 The Inspiralizer doesn’t make any fake promises or steal content

One of the most common emails I get is, “Where is my julienne peeler?!” because people think I’m the creator of Amazon’s “Spiralizer” brand. So, I’ve never tried to redeem my free julienne peeler, but based on the e-mails I get alone and the note at the bottom that it’s “based on the manufacturer’s discretion,” I’m guessing this is a cheap trick or gimmick.

ALSO, I emailed for my “Free Recipe E-Book” (advertised below) and upon downloading it, it was basically a PDF-ed word document with stolen recipes from some of my favorite food bloggers (including me!). I was shocked, disappointed, and frustrated for my fellow food bloggers. 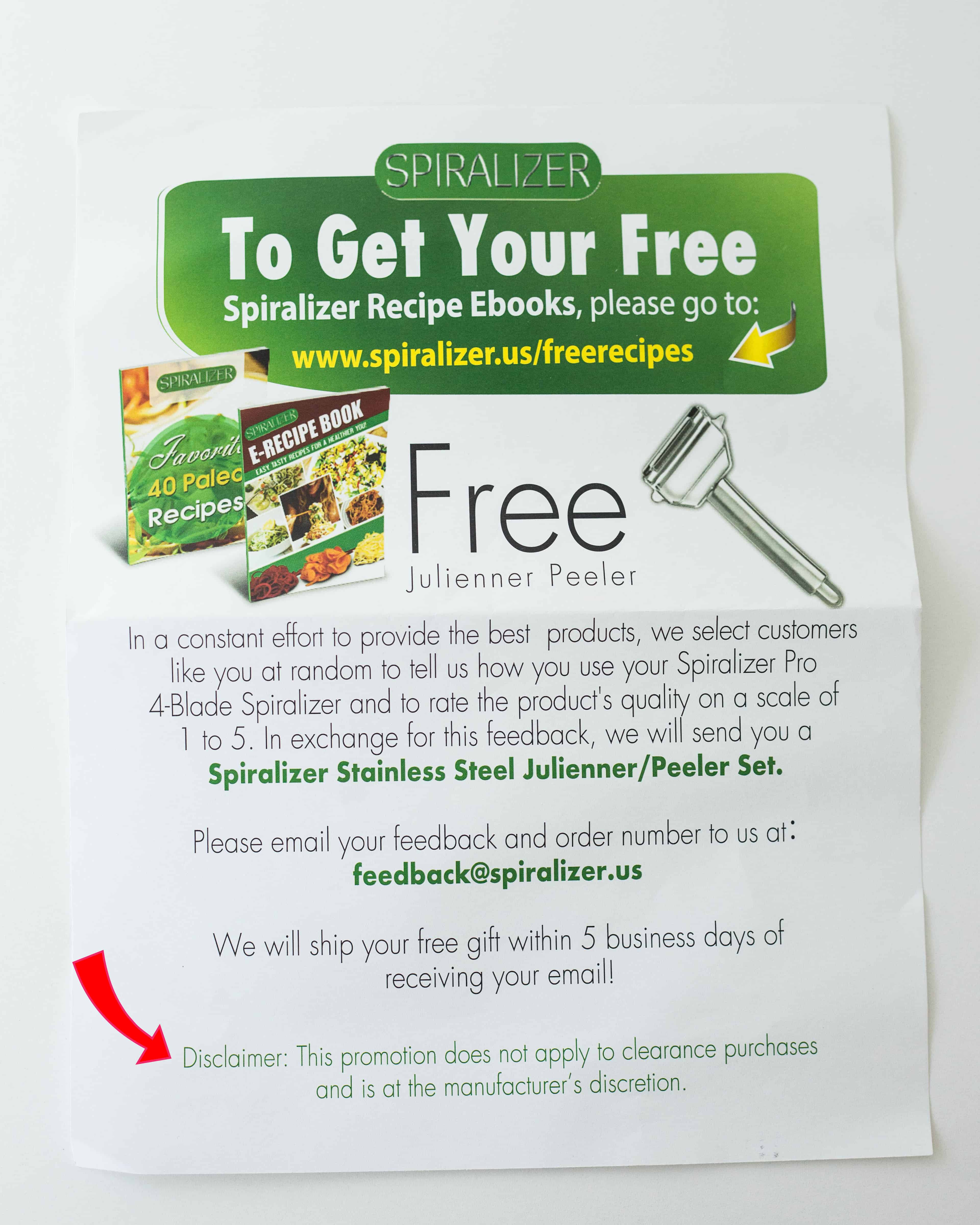 Better for securing to small veggies (like carrots) and for reducing veggie waste, I designed the Inspiralizer with a small central coring blade! 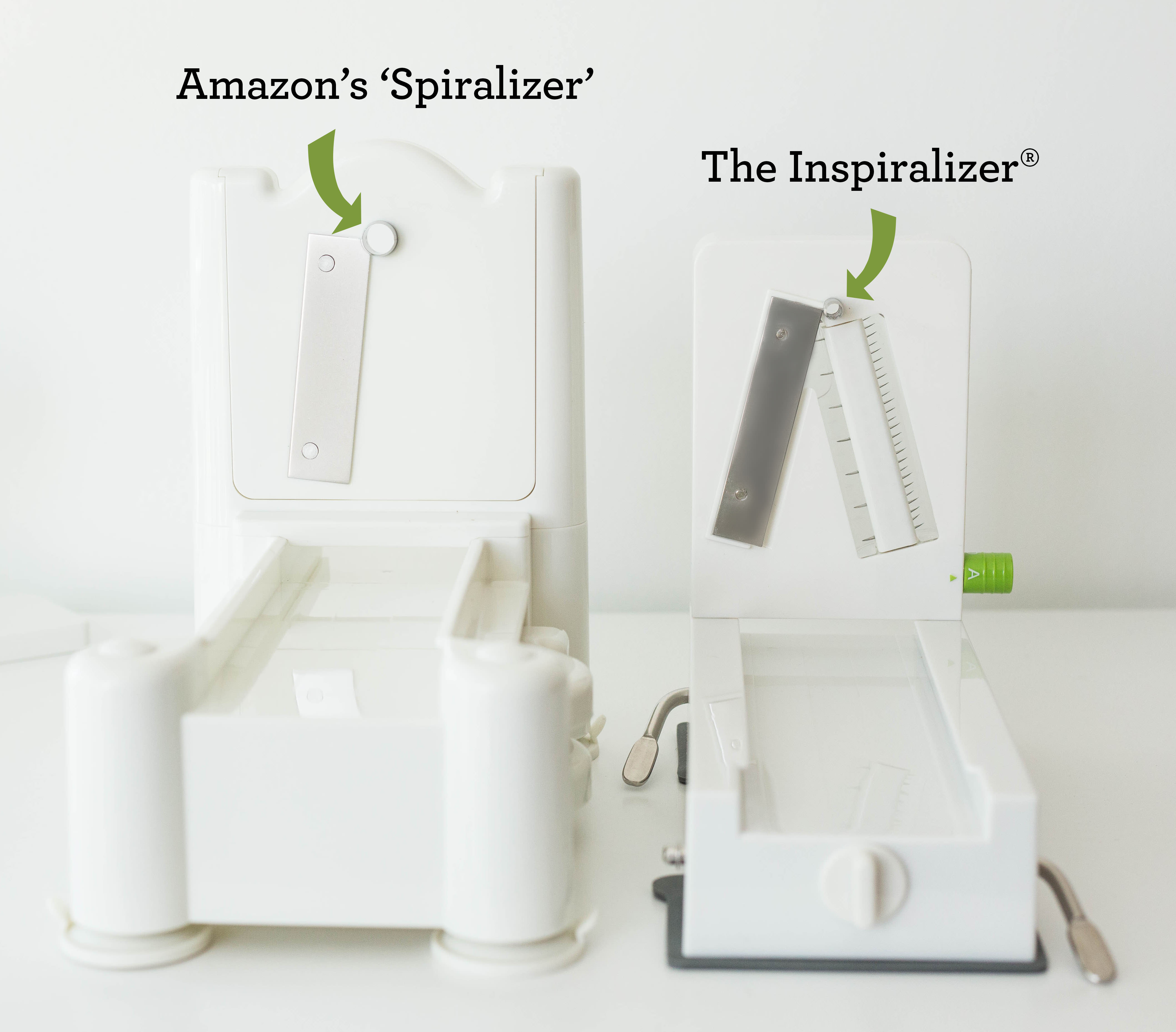 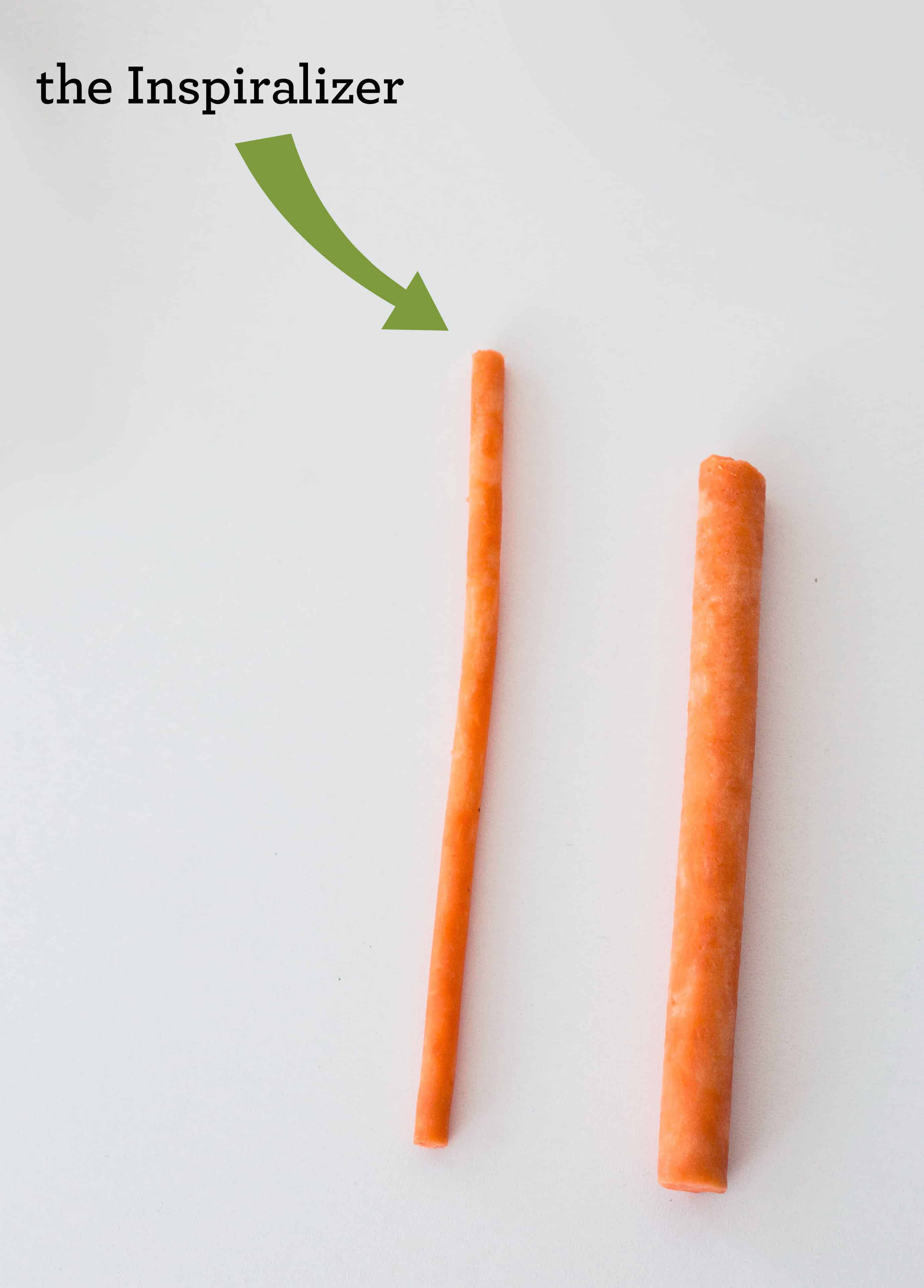 The Inspiralizer is much easier to clean

Aside from the smaller central coring blade, the Inspiralizer is designed so that food doesn’t get jammed up in the blades, thus, making it easier to clean! 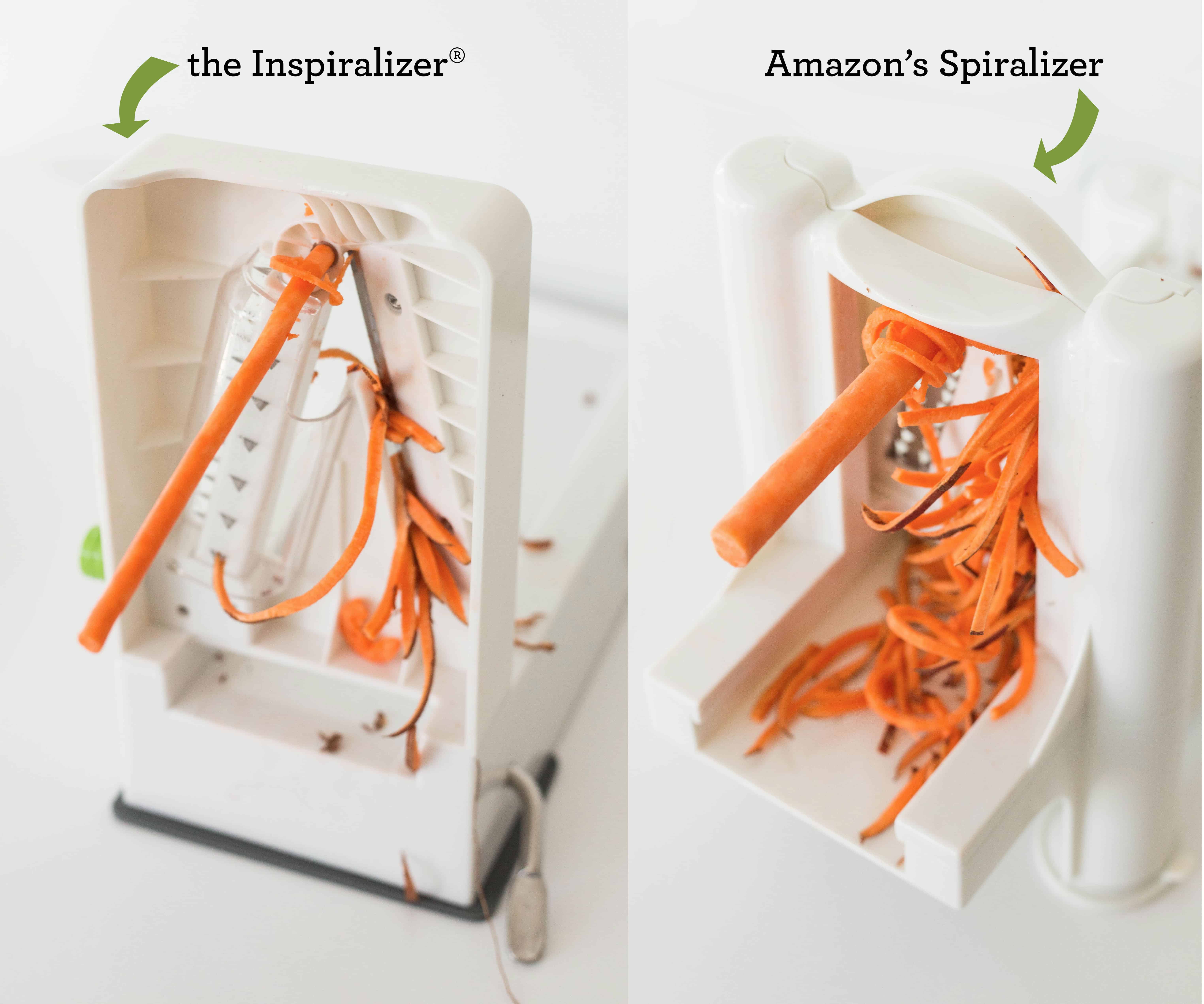 Do you have any other questions? Let me know and I’ll be happy to answer them in the comments below!

Where can I purchase the Inspiralizer?

Thank you for your support! You can purchase the Inspiralizer one of these ways:

If you decide that the Inspiralizer is not for you, that’s totally okay! All I want in the end is for you to have a satisfying spiralizing experience. You’re still part of the community, we just won’t be able to help you troubleshoot spiralizing issues related to your spiralizer. 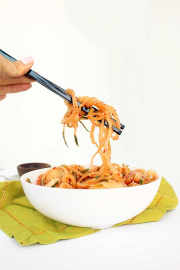