Spiralizing Tips & Info
Inspiralized was started out of a pure passion for eating healthy and helping others. When...
share this post

Inspiralized was started out of a pure passion for eating healthy and helping others. When Ali discovered the spiralizer and quickly learned how easily it could be used to make creative, delicious and nutritious meals, she immediately looked online and was sad to find that there was no community or resources available for those who spiralize. Committed to spreading the word about spiralizing and sharing her recipes, she started Inspiralized.com, the definitive resource for cooking with a spiralizer.

how ali first discovered the spiralizer

My mother is a Type 1 diabetic. Actually, she had gestational diabetes, so she became diabetic while pregnant. Perhaps, subconsciously, this is a reason why I eat clean, healthy, whole foods and resist sweets as much as I can (although, I’m not perfect- I’ll admit!)

While trying to regulate her blood sugar levels in 2012, she started seeing a health coach once a week, in Hoboken, NJ. Actually, this coach was Lu’s old roommate! He suggested she try raw veganism to help. While my mother’s diabetes is Type 1 and not “curable,” a vegan diet lowers cholesterol and reduces your consumption of saturated fats, which ultimately helps control blood glucose levels.

She was about to go to Florida for the winter and he suggested a restaurant near their place in Singer Island. The restaurant was Christopher’s Kitchen in Palm Beach Gardens.

So, she went. Not knowing about zucchini noodles or the spiralizer, she ordered the “Dragon Bowl.”

A few months later when she was back in NJ in 2013, we went to Pure Food and Wine in New York City, a raw organic restaurant. We had an incredible meal (I really suggest that restaurant if you live in NY – you’d never guess the food was raw!) and she was committed to eating more vegan and plant-based, so she bought their cookbook.

A couple more months went by and despite her insistence that I should try them (even my sister tried them and had the same reaction), I hadn’t given them a chance.

One Sunday night a few weeks later, I was visiting them at the house in NJ and she made me zucchini noodles. I was floored, incredulous, and fascinated. Most importantly, I regretted not trying it sooner! The consistency was unbelievably similar to the real deal. Always looking for new ways to eat healthy, I was totally impressed.

Literally, that night, I took the spiralizer from her and brought it back to my apartment. That Monday (the next evening), I made  Lu and I a simple tomato zucchini noodle pasta with artichokes, cannellini beans and shrimp for dinner.

His reaction was exactly the same as my mother’s, mine and my sister’s: absolutely stunned. He loved it! He put his fork down and jokingly said, “You should quit your job and build a community around this.”

Two months later, on June 25, 2013, after experimenting and having so much fun with the spiralizer and building up the courage, I quit my job and the next day, I started Inspiralized.com without a business plan, just a passion for spiralized cooking and a strong desire to help others learn to cook healthfully. 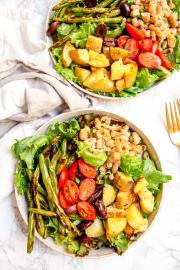