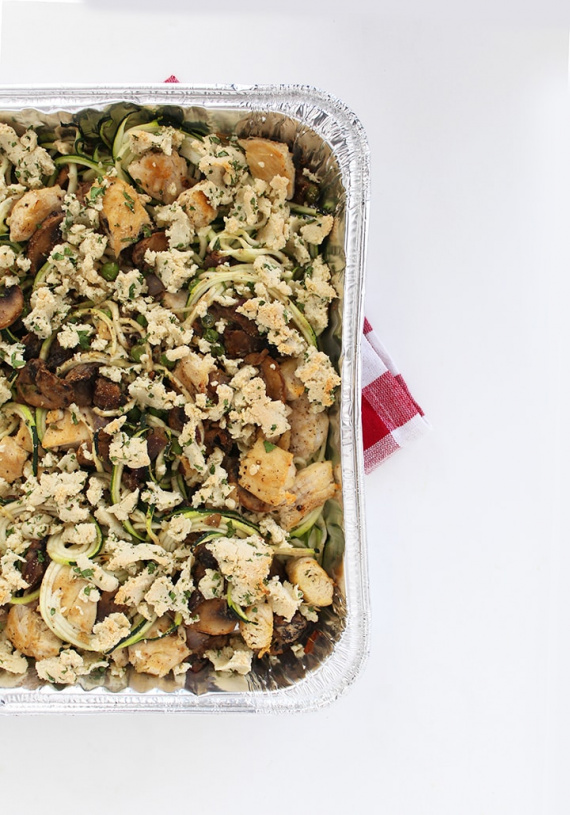 Recipe by Vegetables, Gluten Free, Paleo, Meat & Poultry, Pasta, Zucchini + Summer Squash
Ever since that recipe for my Zucchini Lasagna, I’ve wanted to do a series on “Italian...
jump to recipe
share this recipe 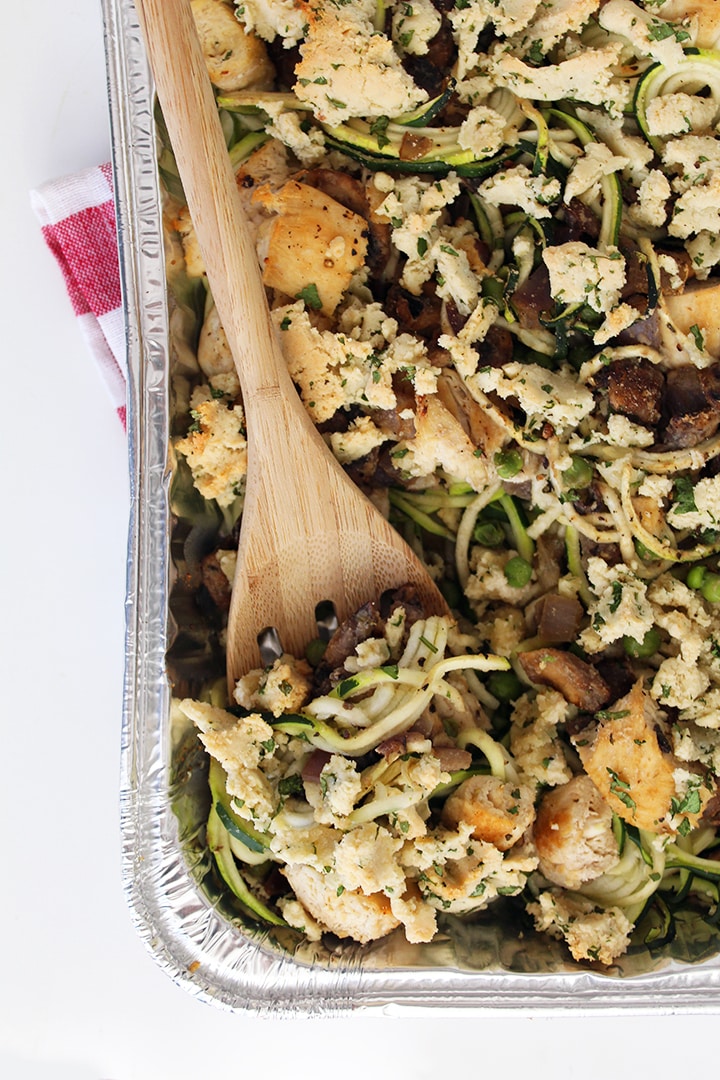 Ever since that recipe for my Zucchini Lasagna, I’ve wanted to do a series on “Italian casseroles.” I mean, can you go wrong with a skinny-fied version of “baked ziti”?

I’ll answer that: no.

So, instead of subjecting you all to a week of casseroles to please myself, I’m just bringing you a casserole with an Italian name: tetrazzini. 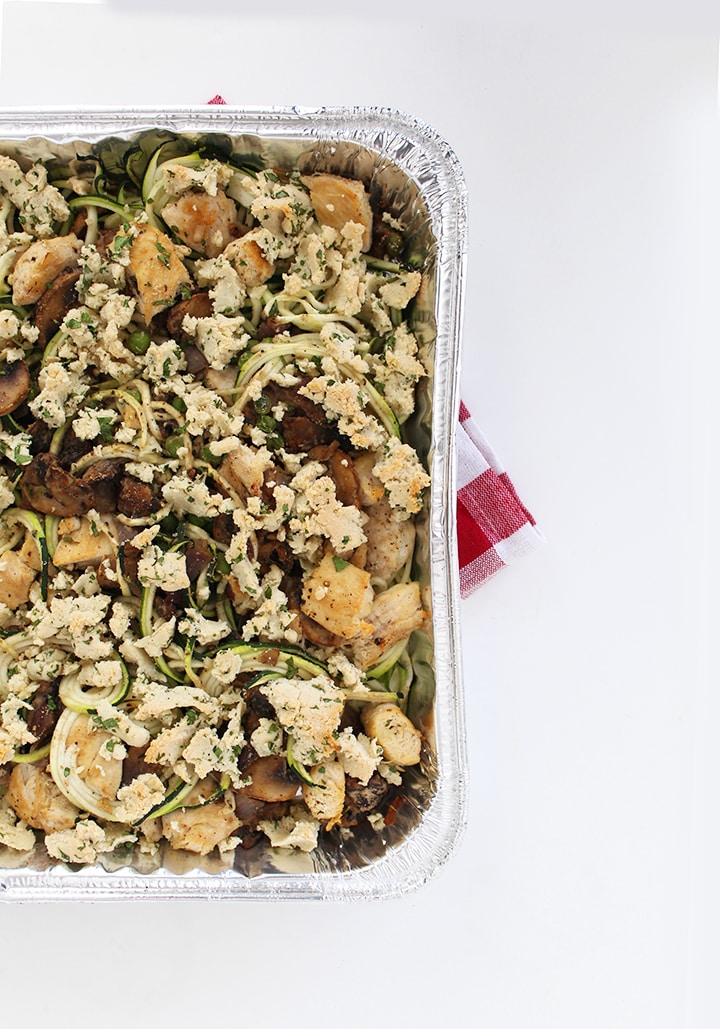 I did a little research and apparently, this casserole is named after an Italian opera singer and is rumored to have originated in San Francisco. Some also say it started in New York City.

Whenever I say I’m “Italian,” I usually say “Italian American.” That doesn’t make me any less in love with all things Italian. Us “Italians” tend to be proud of our roots. Actually, my grandfather can’t complete a sentence without giving an anectdote about Italy.

Pops: “My tomatoes are doing well. You know, Ali, the Italians grew their tomatoes……”

Typical. I love him with all of my heart, because he taught me to love food and to “live to eat,” not “eat to live.” Him and my grandma, of course. 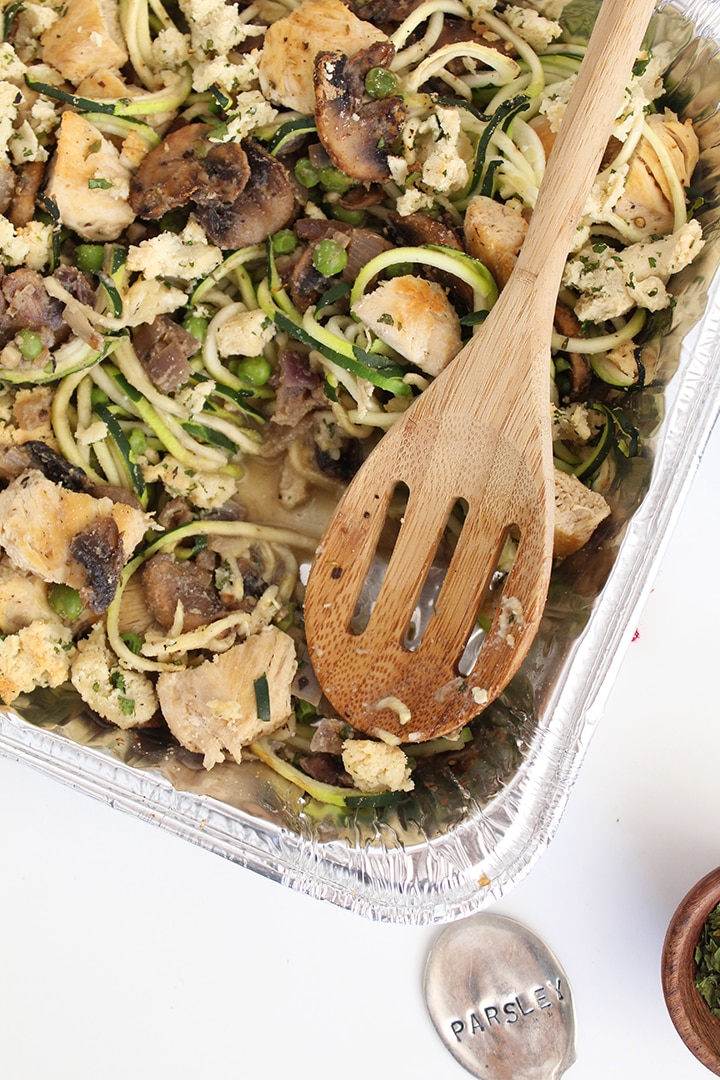 Sidebar – one of my recipes in my cookbook is going to be my grandfather’s meat sauce with my grandmother’s meatballs. You’re going to love it, as I have for 27 years.

Back to this recipe. A tetrazzini is basically a spaghetti casserole cooked with mushrooms, peas and typically turkey. It’s cooked in a gravy with a splash of white wine.

Well, we’re family-friendly here, so no wine. And of course, no butter or cream here. We’ve used coconut flour to create the gravy with a light chicken broth. Works like magic! 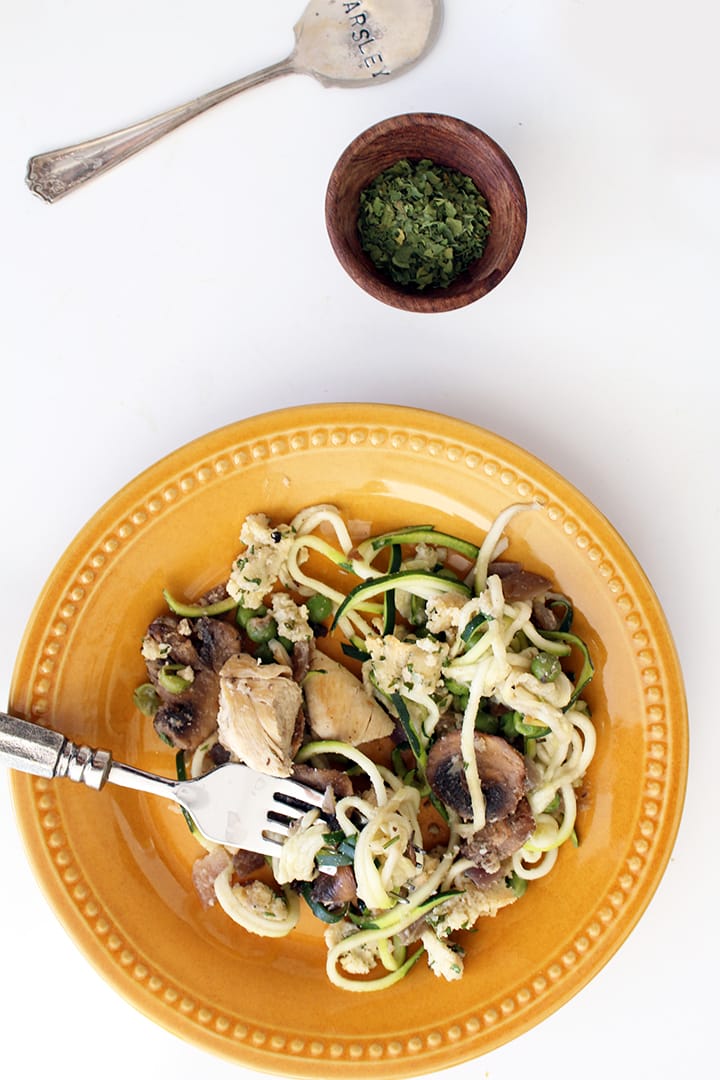 You’d think that this casserole would get runny and mushy, on account of the zucchini noodles. Au contraire! The proportions here are set so that you avoid any excess moisture: just creamy, deliciousness.

Don’t worry if your casserole appears dry when you put it into the oven – remember, the zucchini releases moisture. 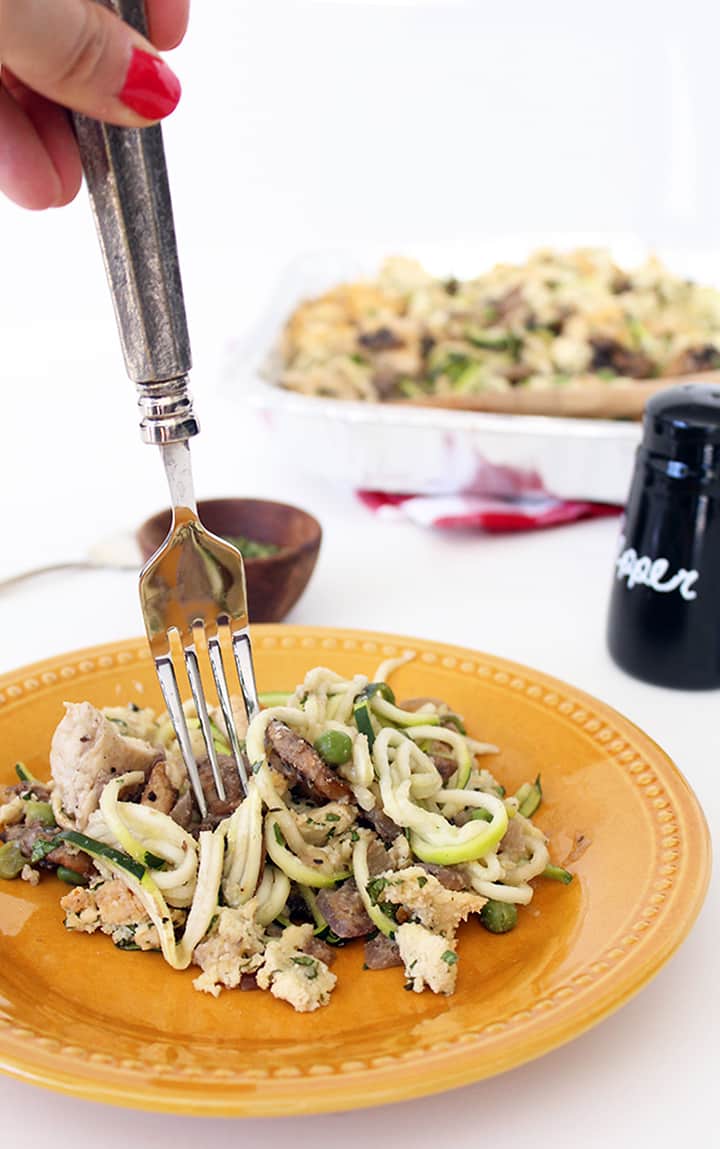 The “breadcrumbs” on top are actually made of seasoned almond meal with chicken broth… which I learned how to do after reading this – gosh, you Paleo peeps are geniuses! It’s important that you season beforehand – it adds much-needed flavor to the almond meal.

Altogether, this chicken tetrazzini with zucchini noodles is going to be your new favorite weeknight casserole meal. Minus the love handles! 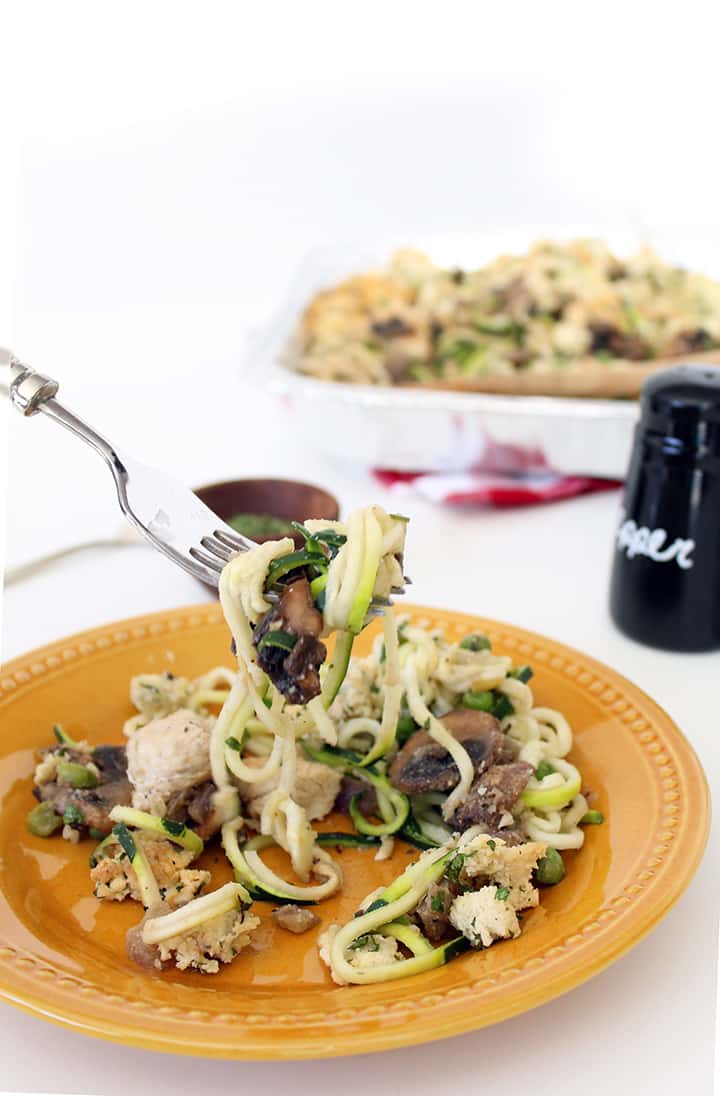 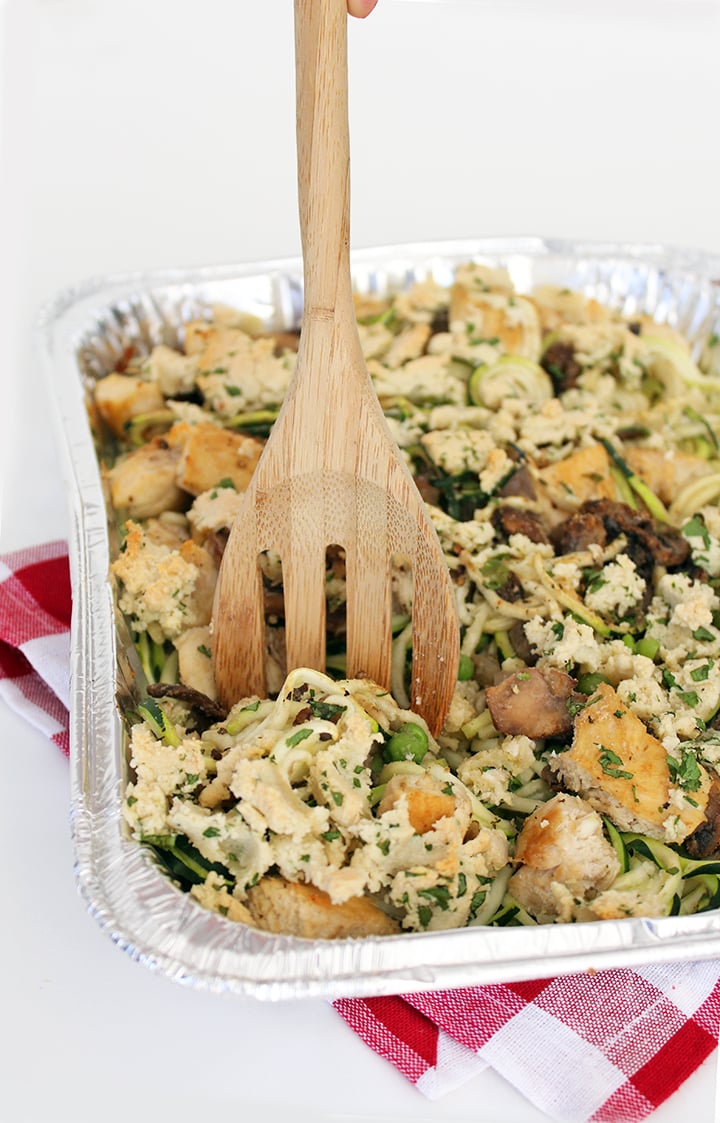 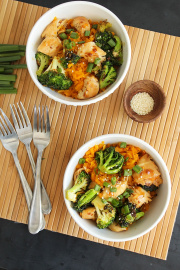