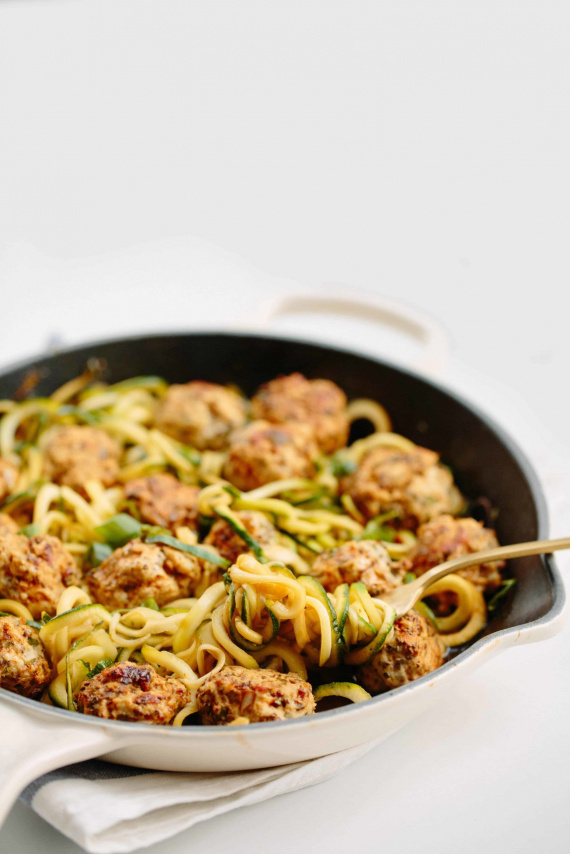 How to Avoid Watery and Soggy Zucchini Noodles

Spiralizing Tips & Info
Here is everything you need to know to avoid watery or soggy zucchini noodles. Now, your zoodles will be crisp, snappy and bright green every time!
share this post 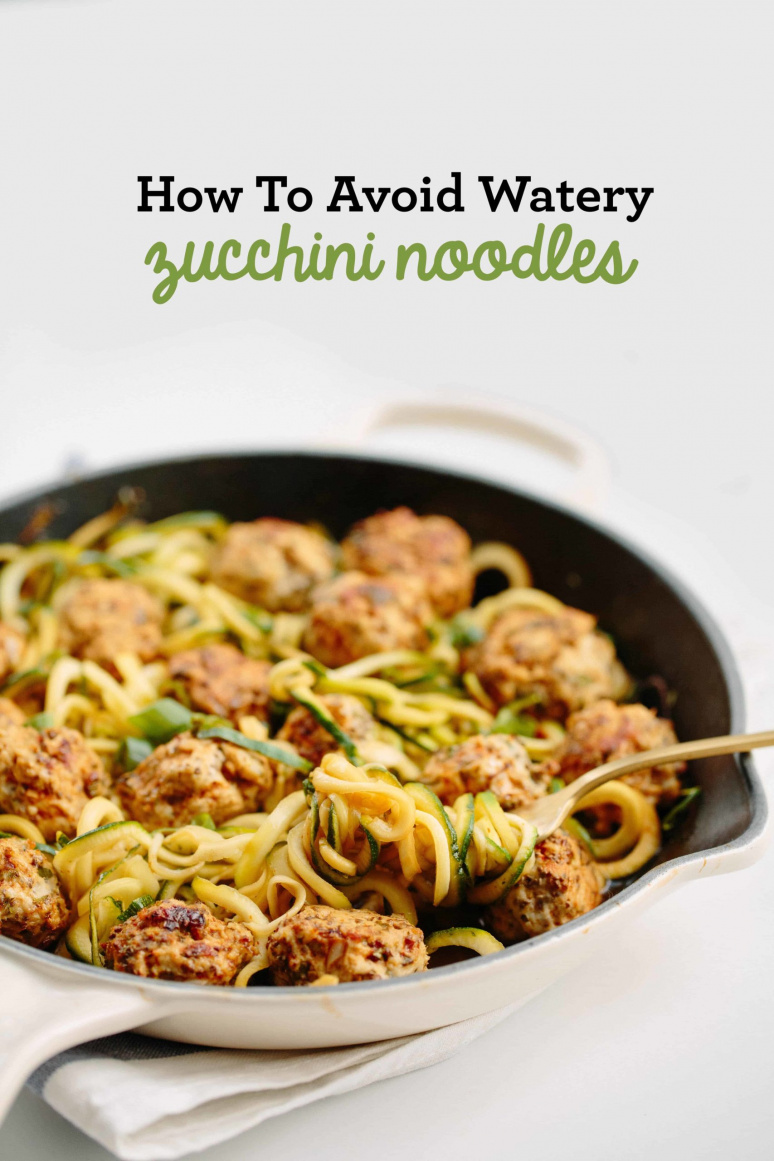 The question I hear most from new spiralizer users is, “How do I avoid soggy zucchini noodles?”

While zucchinis are over 90% water by weight, you can expect your cooked zucchini noodles to be a bit watery. However, there are a few simple steps you can take to avoid watery, limp or soggy cooked zoodles! Follow the tips and tricks below and you will always have crisp and fresh-tasting zucchini noodles for all of your favorite recipes.

After you spiralize a zucchini with a spiralizer, there are three best ways to cook the zucchini noodles so they are crisp, not soggy:

For more information on how to cook zucchini noodles, read this post.

First, if you’re serving raw zoodles (such as this tropical Coconut-Mango Zucchini Noodle dish), you won’t have to worry about sogginess. Cooking is what really makes zucchini release moisture. However, sometimes even uncooked zucchini can get a little limp after it’s cut. In this case, to reduce excess moisture, simply pat the spiralized noodles dry with paper towels or a thin kitchen rag.

If you’re cooking zucchini noodles in a soup such as this Chicken Zucchini Noodle Soup, you really don’t have to worry about excess water. Because of osmosis, the noodles will keep their moisture and stay mostly firm.

However, because the zucchini will release its water content into whatever soup you’re making, it may dilute the flavor. For example, if you’re making salty ramen, the ramen will have less umami flavor the longer the noodles sit in the broth. It’s easy to fix this by adding more seasonings if you store the soup. If you’re digging in right after cooking the ramen, this won’t be an issue.

Finally, if you’re cooking zucchini noodles in a skillet, you will notice immediately that the noodles release moisture in the pan. One spiralized zucchini releases barely a tablespoon of liquid. However, if you’re cooking multiple zucchinis, you can quickly end up with a lot of water in the skillet.

Here are our tips on how to avoid watery and soggy zucchini noodles.

This way, the zucchini water can evaporate before you add more liquid with the sauce.

The next tip to avoid soggy zucchini noodles is to drain them.

After you cook the noodles and before you add sauce, drain the zoodles in a colander. Shake off any excess moisture. Bonus points for patting dry with a paper towel or dish towel!

It’s hard to avoid extra moisture when there is nothing added to absorb the water. Why do we love dipping bread in our leftover pasta sauce? To sop up the flavor!

So, either serve your noodles with some good crusty bread and dab as you go, or cook with an ingredient that absorbs moisture, like:

Tip 4: Reduce or thicken your sauce

If your dish includes a hot sauce, remove liquid the old-fashioned way: by reduction or thickening.

Reducing your sauce simply means to simmer it until enough liquid has evaporated. Be sure to stir the sauce often while it simmers to prevent burning. You can reduce your sauce even more than normal to account for the added liquid from the zucchini when you add everything together.

Thickening sauce means to add a starchy thickener. This can be a simple slurry made my mixing equal parts (1 tablespoon each to start) cornstarch and water. Stir this into your sauce and watch it thicken up in minutes. You can also thicken sauces with puréed potato or cauliflower for extra veggies.

Just like a piece of meat will rest on a cutting board and continue cooking for a few minutes after you remove it from heat, so will zucchini noodles.

If you cook noodles too long in the skillet and they’re already looking limp and soggy, they’re going to be even soggier topped with sauce on your plate. To avoid soggy and limp noodles, I recommend cooking for only 3-5 minutes (5 if you’re cooking more than 1-2 spiralized zucchinis) and tossing frequently. You want a slightly al dente noodle.

Regardless of what you do to reduce the moisture in zucchini noodles, once the noodles sit in a hot sauce, water is going to drain out. So, plate your your meal just before you’re ready to eat it! Don’t let the noodles and sauce sit together for more than a minute before serving, because every second is precious!

We hope these tips help you have a more enjoyable zucchini noodle dinner with minimal sogginess!

Hungry? Now that you know how to avoid soggy zucchini noodles, put these tips to use with these popular zoodle recipes: 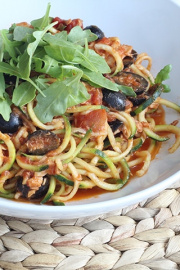