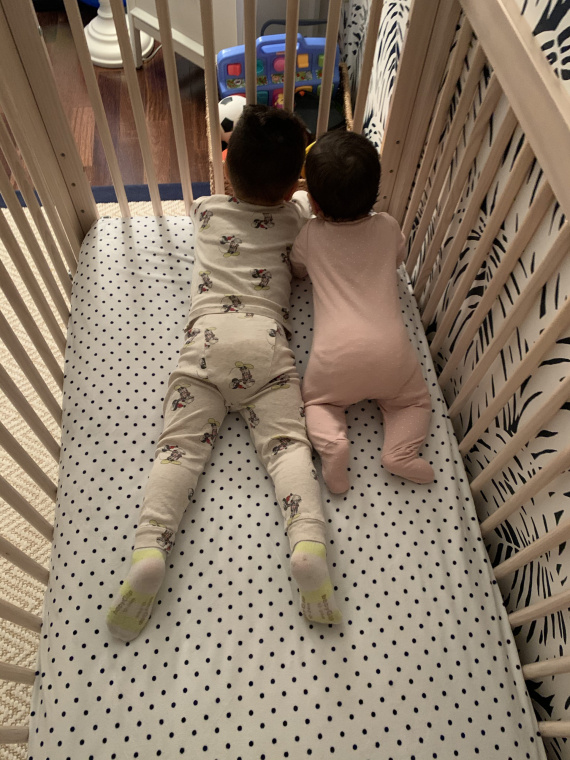 How I Do The Bedtime Routine Alone with Two Kids

Motherhood
While I was still pregnant with Roma, I spent many nights Googling how to do...
share this post

While I was still pregnant with Roma, I spent many nights Googling how to do the nighttime routine with two kids when you don’t have your partner to help you. I don’t know why it seemed so insurmountable to me, but I was so overwhelmed by the thought of it, that I’d not only ask my dear friend Mr. Google, but also my mom friends who had multiples and had been through it.

The general consensus was, “You’ll figure it out, it’s hard at first, but then you get into your groove and routine and it’s fine.”

That couldn’t be more accurate! But, I wanted to write this post in hopes that it will alleviate some of the stress-inducing uncertainty that I experienced as a soon to be mother of two. Plus, many of you ask me how I do it, so here we go!

When The Second Child Is a Newborn

First off, my kids are 21 months apart. I have an almost 2.5 year old and an almost 9 month old. In the beginning, when Roma was a newborn, I’d bathe Roma separately and put her down first and then do the routine with Luca. I’d bathe Roma in the sink, and I’d either put a TV show on and give him a snack or I’d have him help in some way, like get me a towel, or throw something in the garbage. He loves feeling useful, so I felt like giving him little tasks made things go more smoothly.

After bathing the baby, I’d nurse her on the couch while my son watched a television show and ate a snack. After that, I’d tell him to stay on the couch, because I needed to go put the baby down. When he was really little (like months 21-24) he wouldn’t let me leave him alone, he’d come into the nursery doing his usual crazy energetic screams and chatter and running around. Those nights were frustrating, because the baby couldn’t settle down and I literally couldn’t get him to leave me alone without holding my foot on the door and locking him out, which didn’t even work, because he’d yell so loudly, the baby would hear it. After 24 months, he matured and now, he gives me a couple of minutes as I put her in her sleep sack, rock her in my arms for a minute, and then put her in her crib and walk out.

After that, I grab the monitor and do the entire bath situation with Luca and then read him books and lights out, as always. 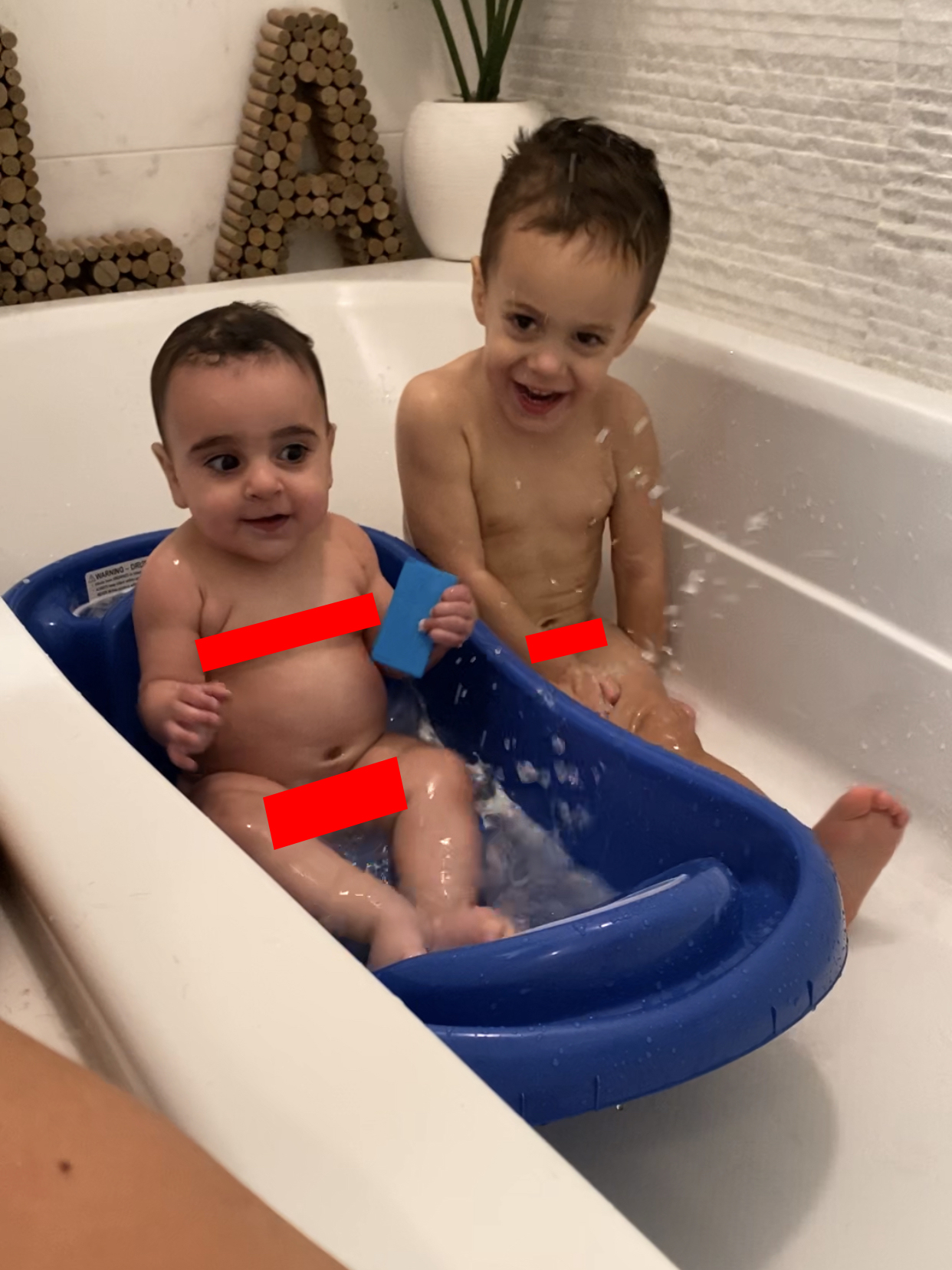 When The Two Kids Can Bathe Together

Once Roma was 5 months and sleeping routinely and starting to sit up unassisted and wasn’t so delicate, I began bathing them together. Ironically, this is HARDER than when Roma was a newborn. Sometimes, I still go back to the old way of dividing it up – getting Roma to sleep and then working on Luca. But, that means that Luca goes to bed later.

Here’s what I do: I prepare the bath by putting Roma’s tub (I’m still using this First Years tub) in the bathtub. I like this, because it separates them and Roma is still too young to just sit freely in the open bath, especially with Luca (he can be unknowingly rough.) I undress Roma and put her in the tub. Then, I put Luca in the tub. We have a lot of fun at bath time! First, I clean Roma and give her some toys to play with and then I clean Luca. Luca loves the bath, so he’s happy to stay in there. We play for a little bit afterwards, together – Roma and Luca love sitting next to each other while I splash them with water, it’s so cute.

Then, I take Roma out of the bath, wrap her in a towel, and do her post-bath ritual: body oil massage, diaper, face cream (she has dryness in the wintertime), and pajamas. I can see the bath from her changing table, so I can still check on Luca. However, when I first started doing the joint bath, I’d bring over the DockaTot and put that down next to the bath so that I could just change Roma right next to Luca in the tub. He didn’t like me leaving him, so that worked until he became comfortable with it.

After Roma is in her jammies, I give her a pacifier and put her in her crib. Then, I get Luca out of the tub, dry him off, and then I pick up Roma, bring her into Luca’s room and put her on the floor with a toy or in his crib (she loves to be in his crib, she giggles!) I get Luca in his pajamas (he’s still wearing a diaper at night) and then, we go into the living room, I put on a TV show or movie, give Luca a snack and his water, and I nurse Roma (this is usually 7pm.) Then, I tell Luca I’m going to go put the baby down for sleep and I walk into our bedroom (she still is in our room), put her in her sleep sack, give her the pacifier, rock her and sing a quick little song and then put her in the crib for the night.

I grab the monitor, brush Luca’s teeth, and then we do his usual bedtime – we read books, say our goodnights to those we love (it’s a thing), and then I put him in his crib and walk out. I keep the monitor with me while I’m reading books, too.

And that’s it! It’s actually a breeze now, and I don’t mind doing it. Lu has a lot of client entertainment that he does, so I’m often left with the kids for dinner and bedtime routine. But like I found what works for me, you’ll find what works for you. My one piece of advice is this – it’s okay if it’s not perfect. It’s okay if your lullaby music doesn’t get played or your baby massage can’t happen. It’s okay if you have to extend bedtime. They’ll get to sleep. They’ll be happy and warm and safe. 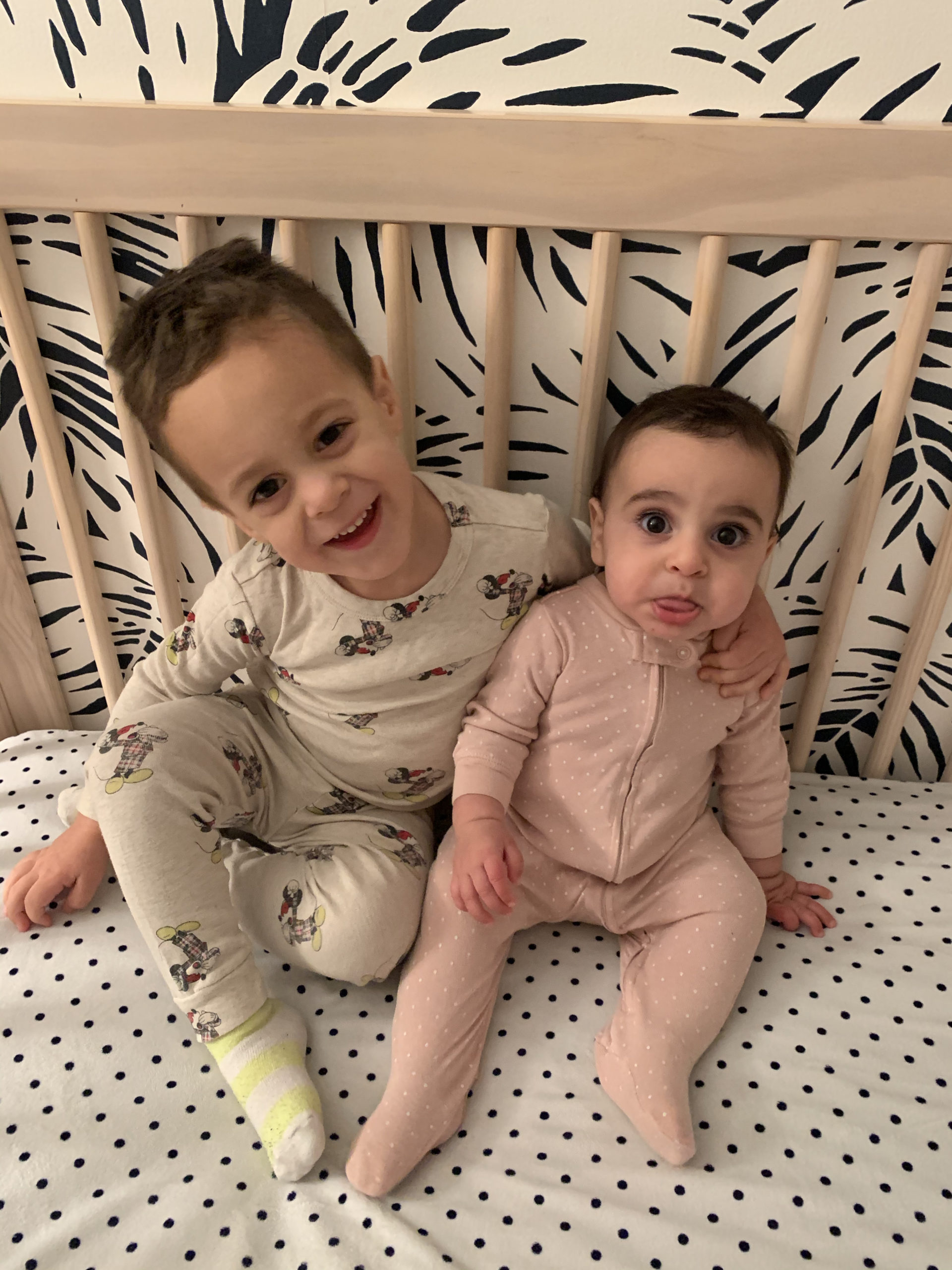 Love to all the mamas (especially the single mamas!) out there doing their thing! And to the soon-to-be mamas of two, I hope this post made you feel less overwhelmed! 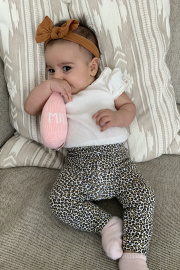