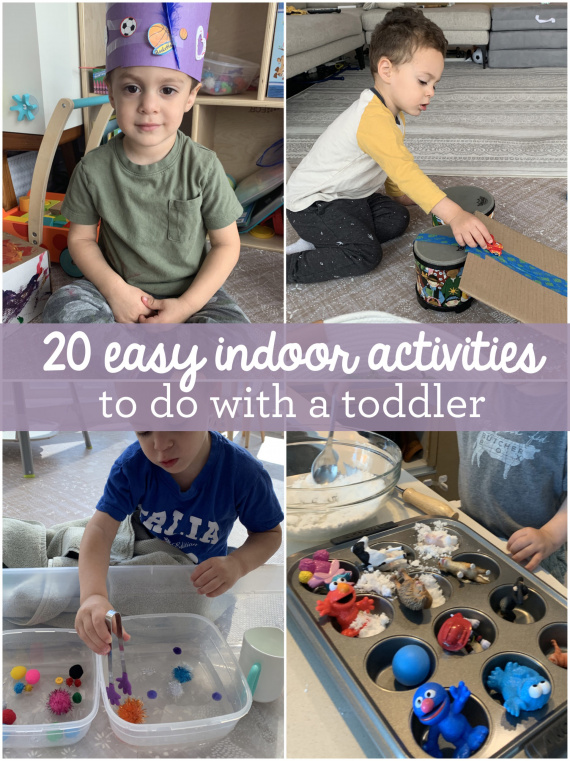 Spiralizing
Before I dive into all the indoor activities I’ve been doing with my 2.5 year...
share this post

Before I dive into all the indoor activities I’ve been doing with my 2.5 year old son, Luca, while we’re social distancing, let me just say this: I have the most energetic and active toddler. Luca usually spends his days running endlessly, kicking balls, playing basketball, running up and down stairs, and he is not the “sit down and do an activity” kind of child. Also, he loves cars and balls.

I’m sharing all of the activities that he actually spent more than 10 minutes with! Some were slam dunks (entertainment for an hour!) and some just gave me that 15-20 minute break I needed. I hope they do the same for you and your family!

A lot of these activities have been inspired by Pinterest and leaders in the at-home activity space like Busy Toddler and Days with Grey.

Sensory bins are amazing. I have a super active toddler and he loves sensory bins. We’ve done a few, like painting (just put some paint in a bin and give them a brush, haha!) and rice. Luca loves covering his cars or Sesame Street figurines with rice and using various scoopers, bowls, etc. 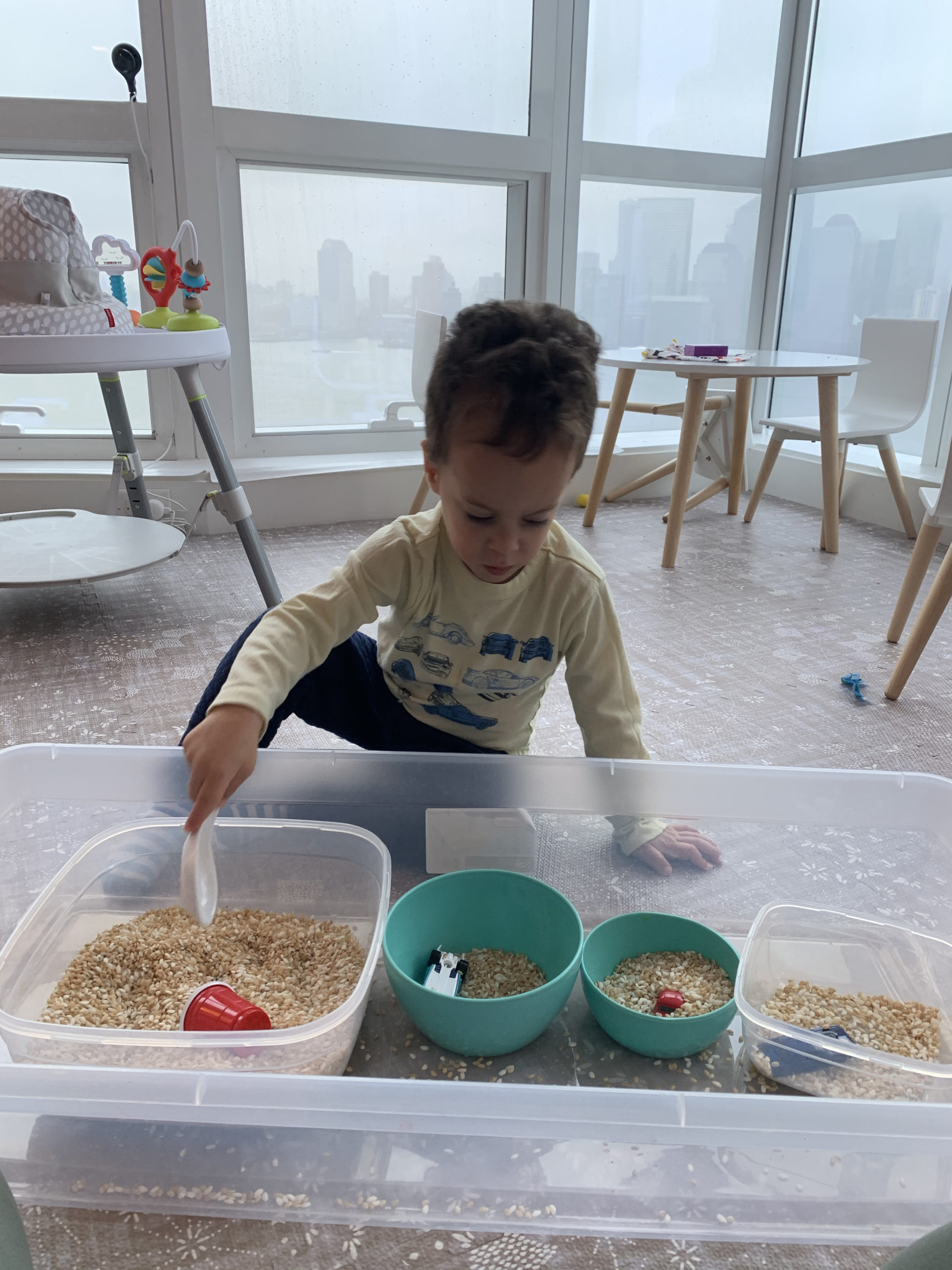 Luca is obsessed with this! In the morning, we use a large ice cube tray, fill it with Pom Poms or small figurines or cars, pour water over it (Luca does all of this) and pop it in the freezer. Later that afternoon or the next day, I set up a sensory bin with two bowls – one to put the ice cubes in and to pour water over and melt and one to place all the melted goodies in. I give Luca tongs or a wide slotted spatula and let him scoop out what melts out of the ice cubes. I use boiling water and pour a little bit in a toddler sized pouring cup. You could also use warm water and salt to do the same thing.

Luca really loves this and it is about a 45 minute to hour long activity! 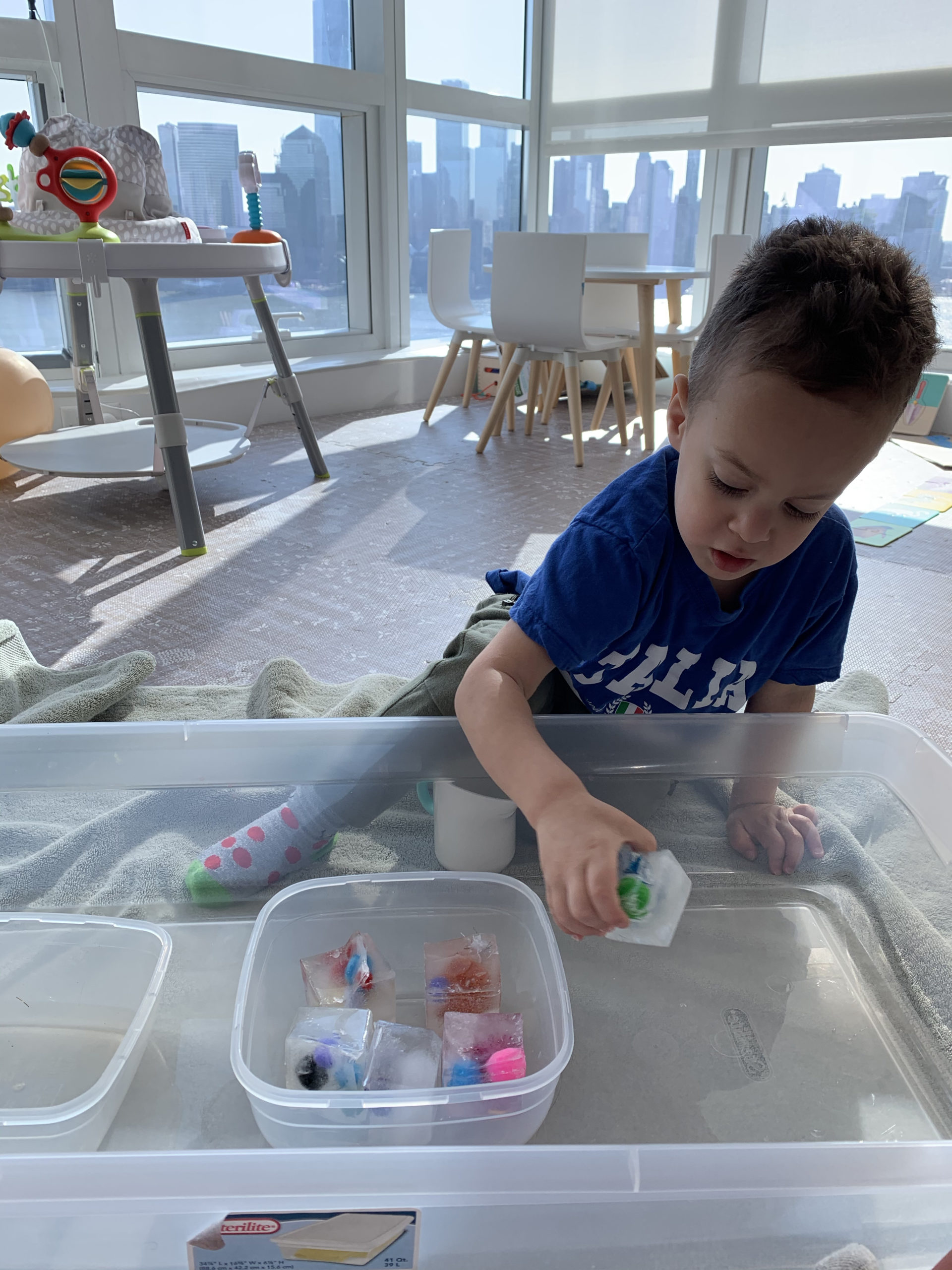 Another sensory bin activity Luca loves is making sandcastles. I combine 2 cups of flour and about 1/2 cup of oil (I used grapeseed oil) in a large bowl and mix together (knead with my hands) until dough like. I like a very moldable dough (almost like Play Doh) so we can better build sandcastles. We build sandcastles, cover his cars, etc. It’s great playtime! 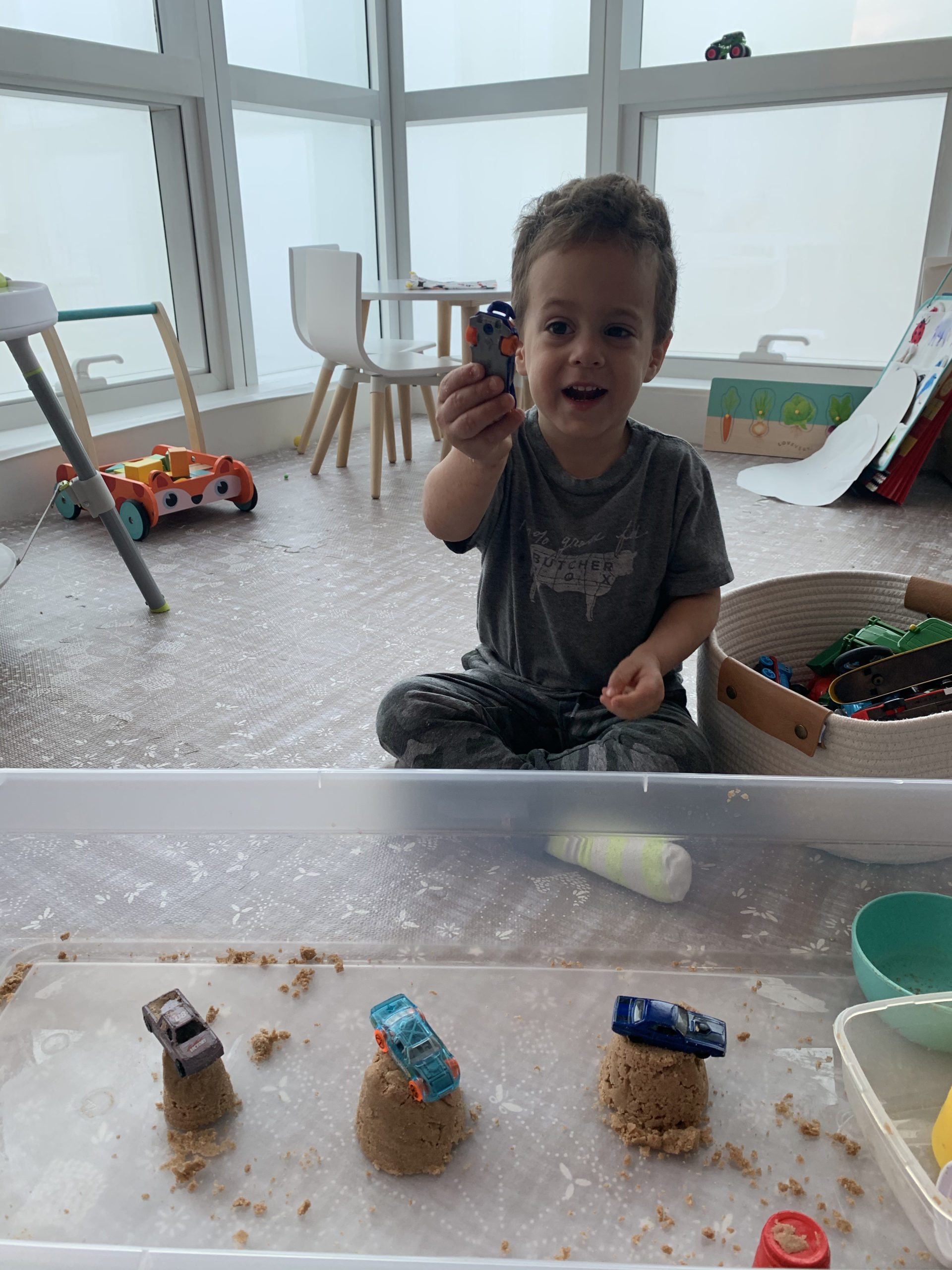 My son isn’t super into arts and crafts (he’s barely into coloring), but this excites him. You need:

Basically, you adhere the sticker paper to a piece of construction paper and then when you’re ready to use it, pull back the sticky part and then go! Luca loves making these and we’ve done them for holidays like Mother’s Day and Valentine’s Day – it’s so easy. 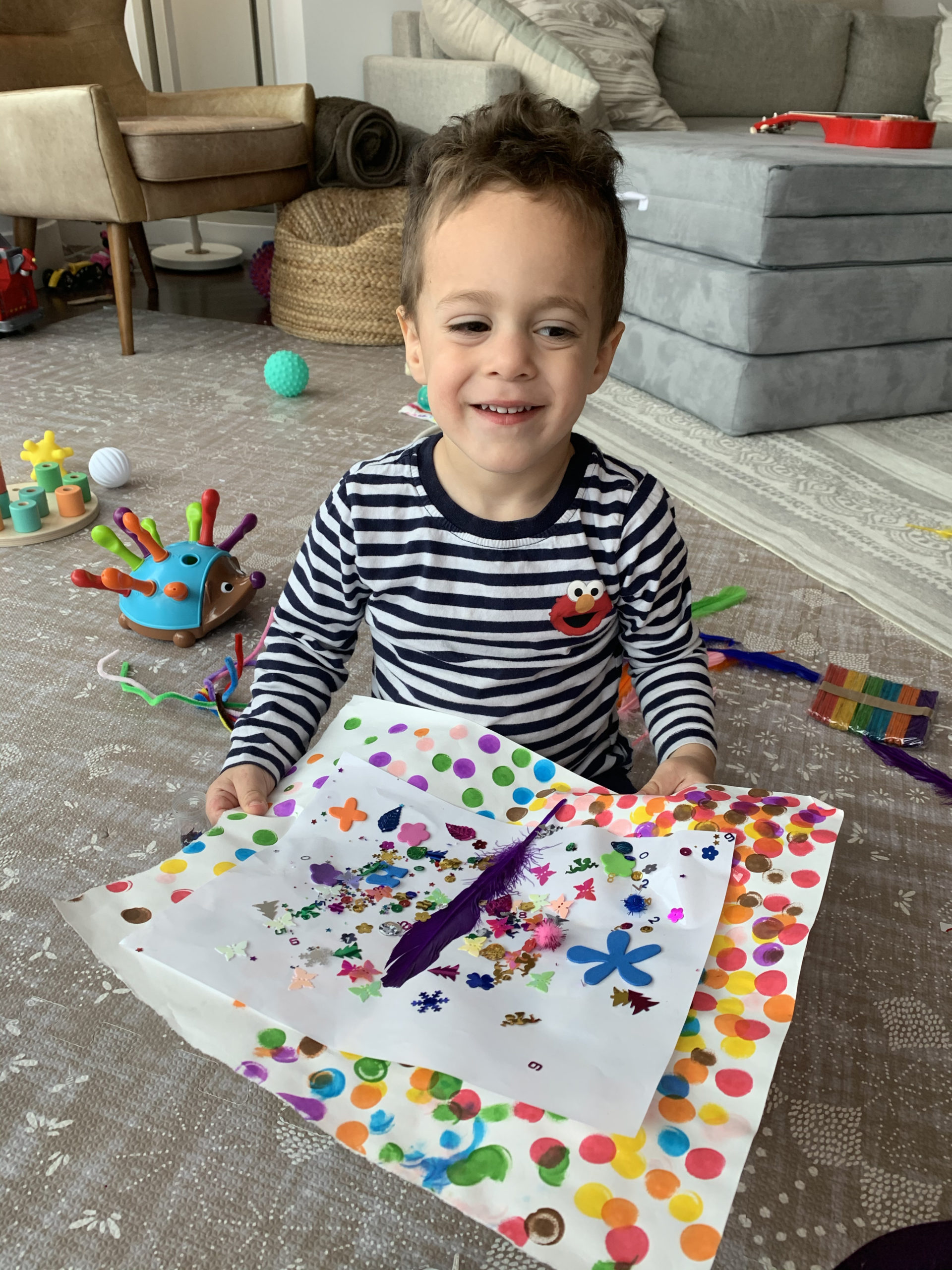 Every once in a while, I’ll whip this out. It’s a pretty basic activity, but if I can catch Luca in the right concentration mood, he loves it. We usually try to make something special about it, like turn it into a scary spider, etc. 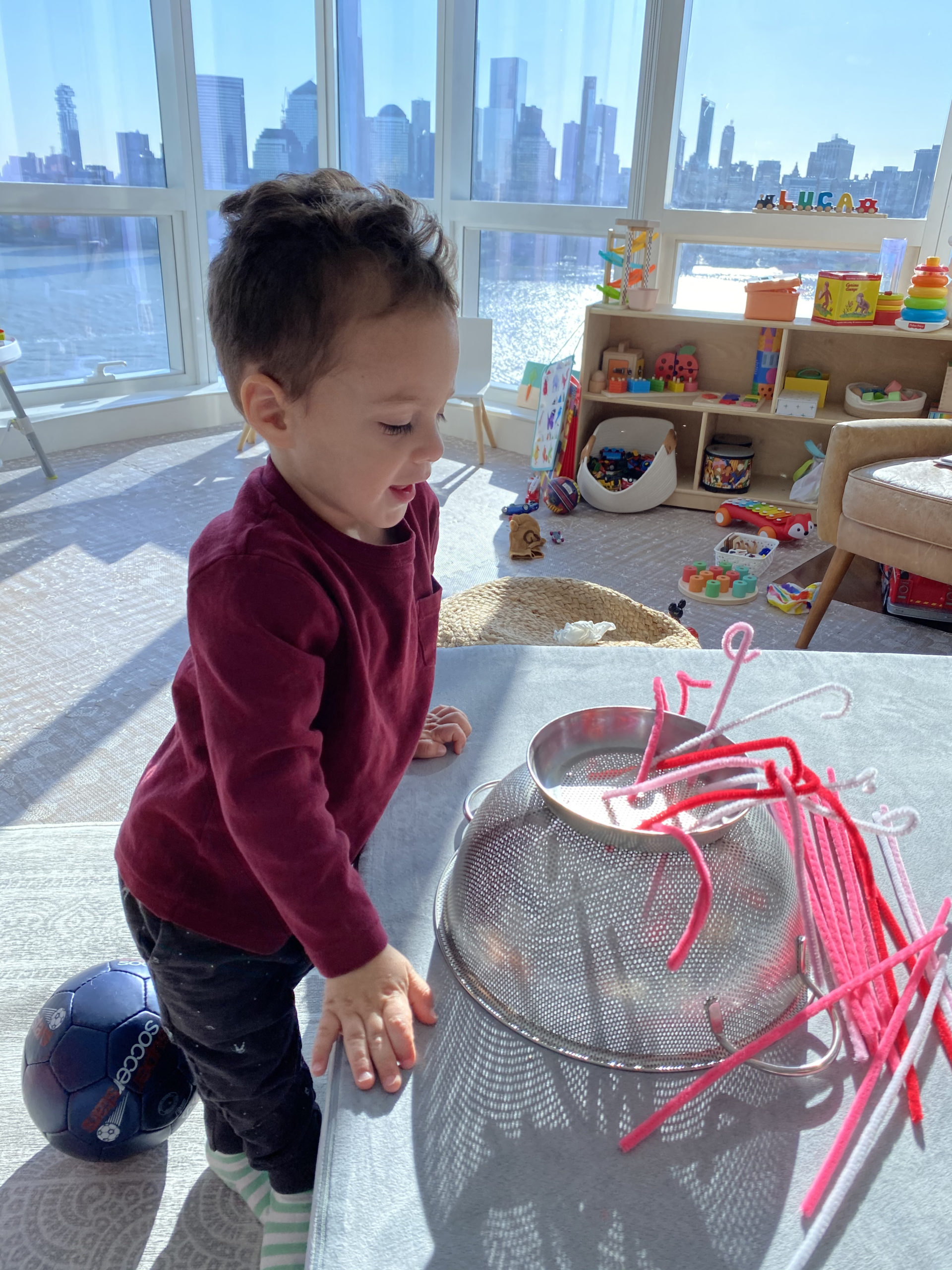 Another classic kids activity! Save your paper towel and toilet paper rolls, tape them to the wall using painter’s tape, and place them so that your toddler can drop pom pom balls in and watch them fall through. 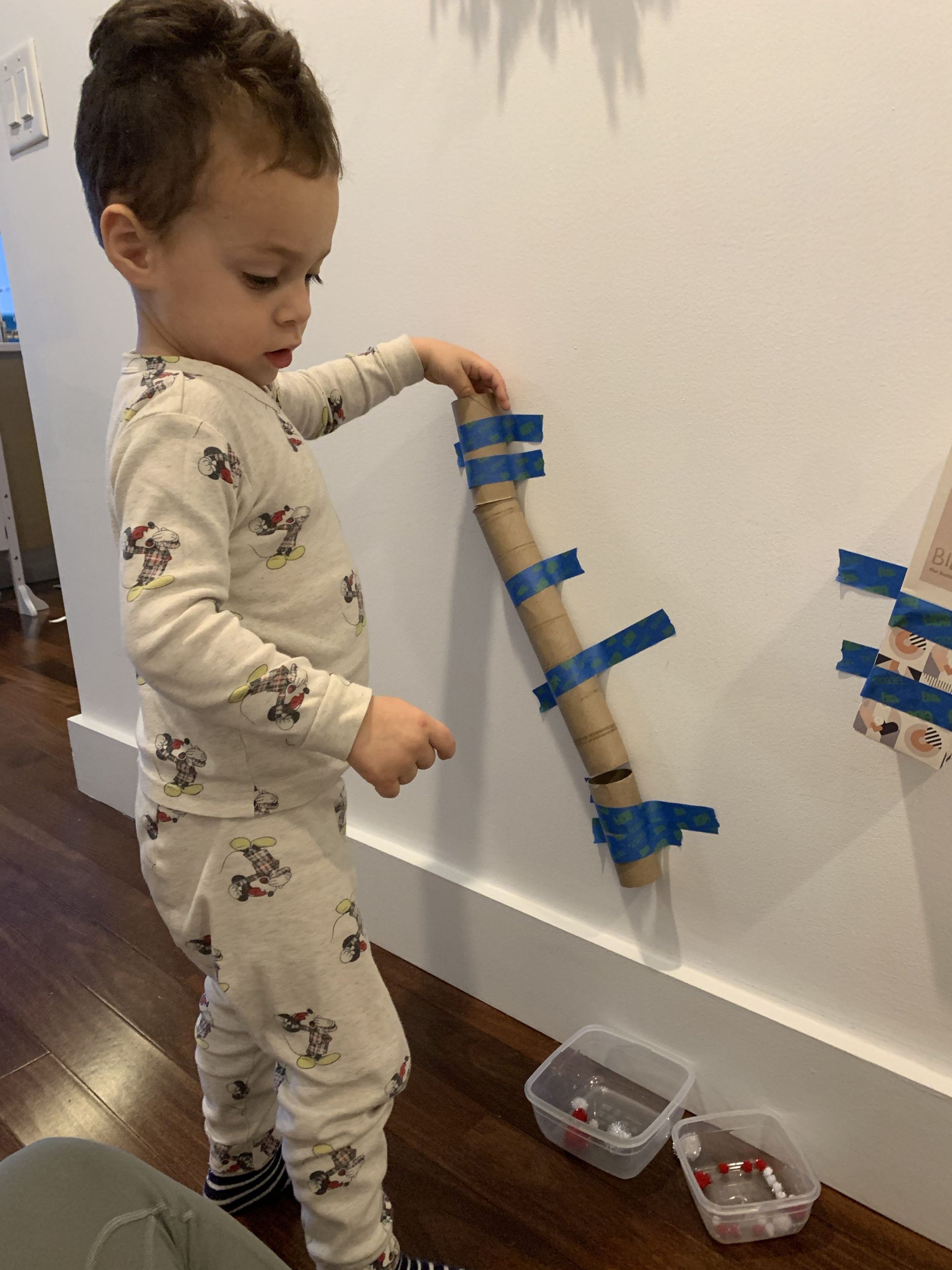 This worked very well on our first day of quarantine, he was very excited to do this activity. Find a container that you can drop and collect popsicle sticks into and then cut a slit in the top so they can easily drop them in. We used a plastic bottle, made a makeshift cardboard top and taped it on with painter’s tape. 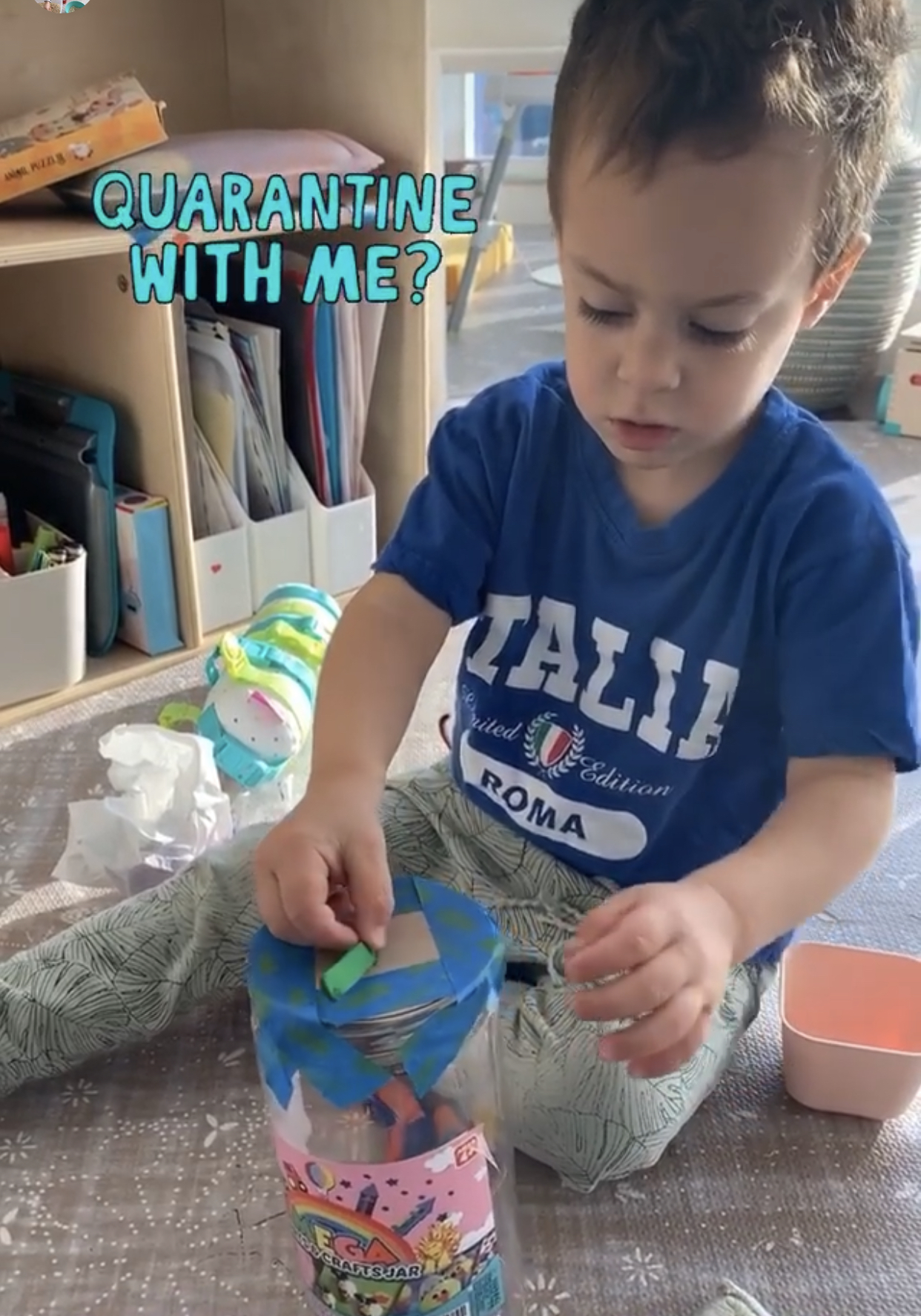 This came out of pure boredom, but it was a fun little mini activity while Luca ate his snack. I put a straw into a Play Doh container and gave Luca beads to drop on the straw. It definitely gave me some time while he ate his snack. 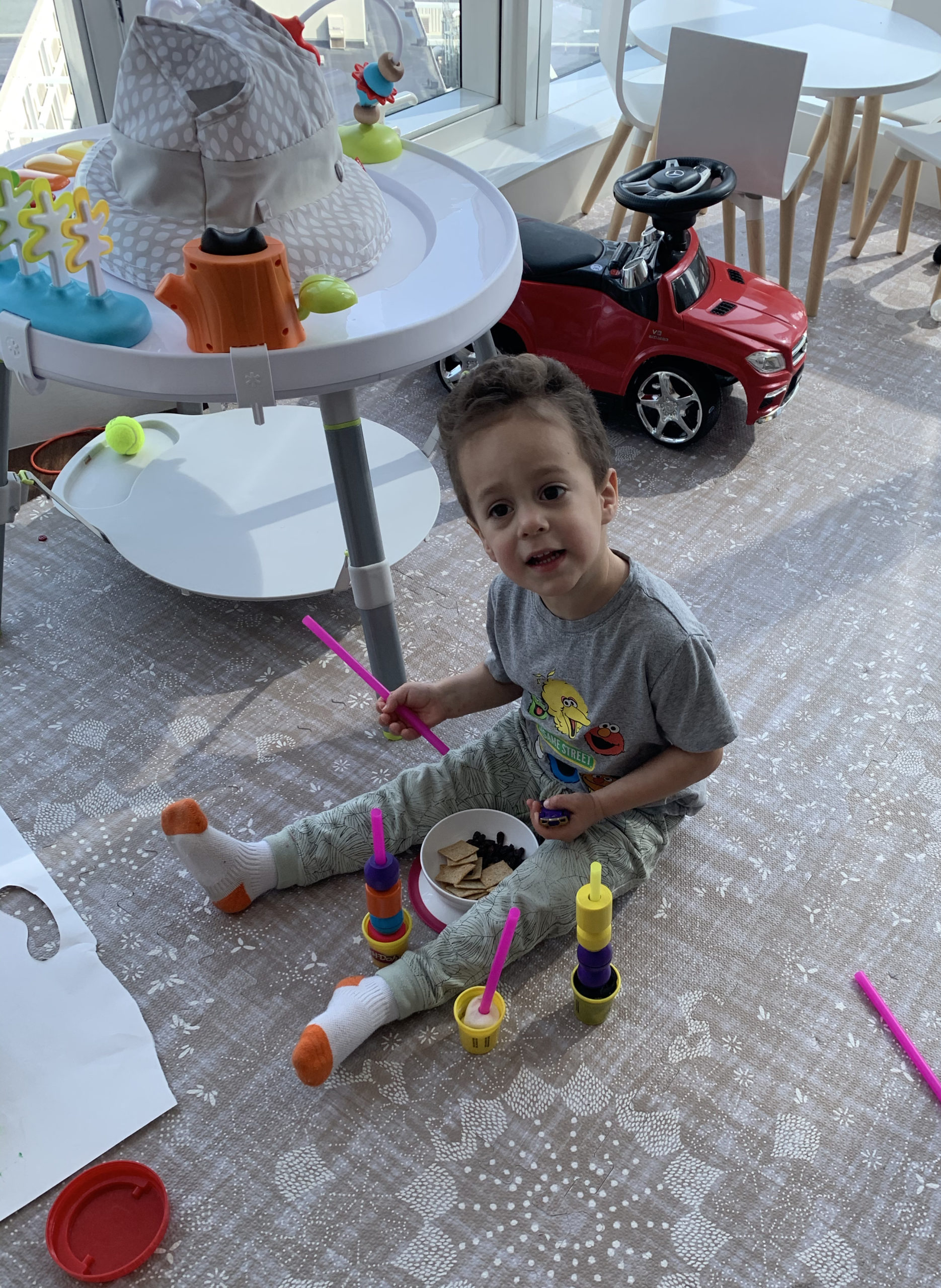 Make a hat out of construction paper 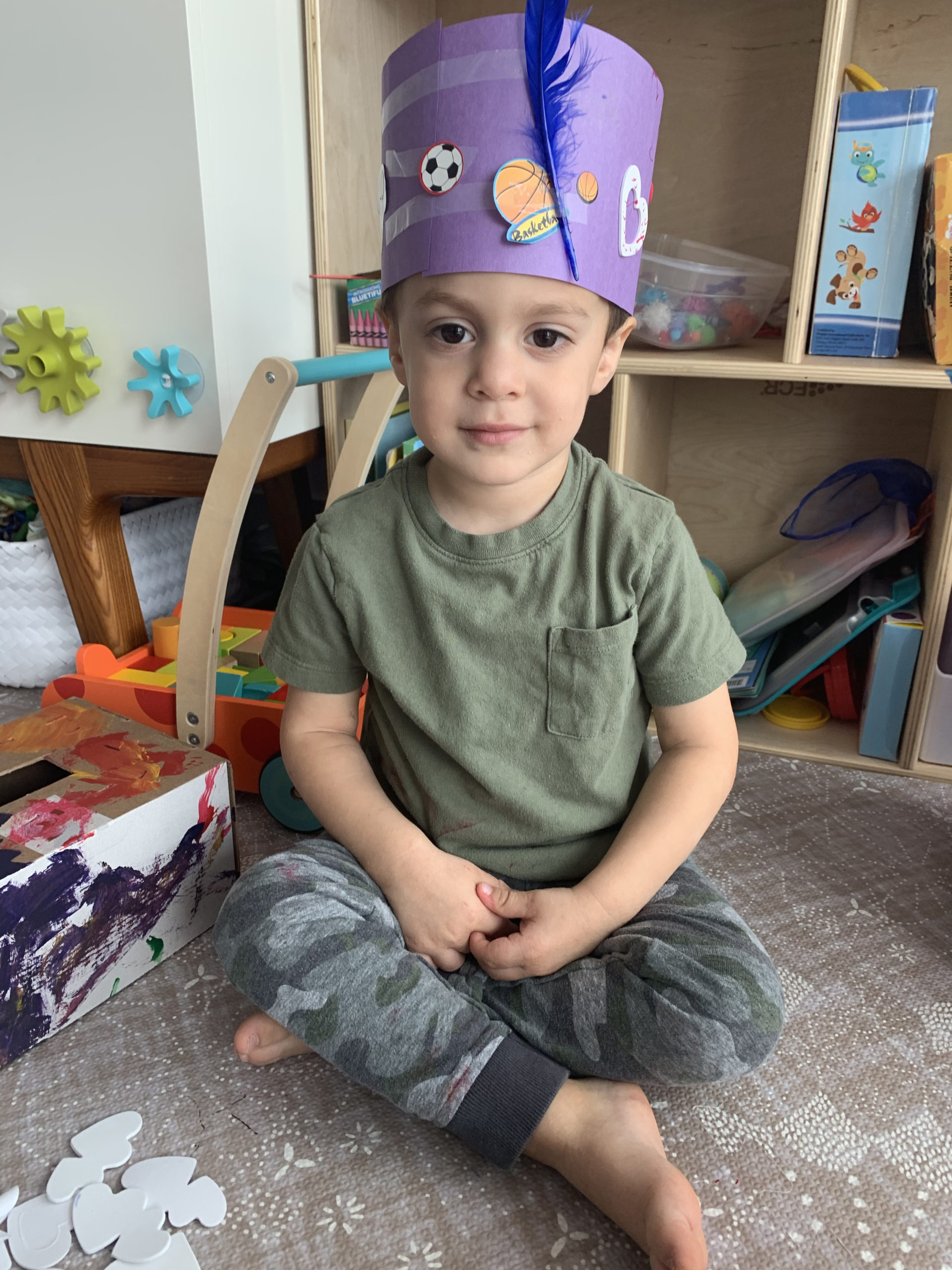 My son loves anything to do with cars, so I cut strips of construction paper, bent them to make a “tunnel” and taped them down. Luca raced his cars through the tunnels on the floor. 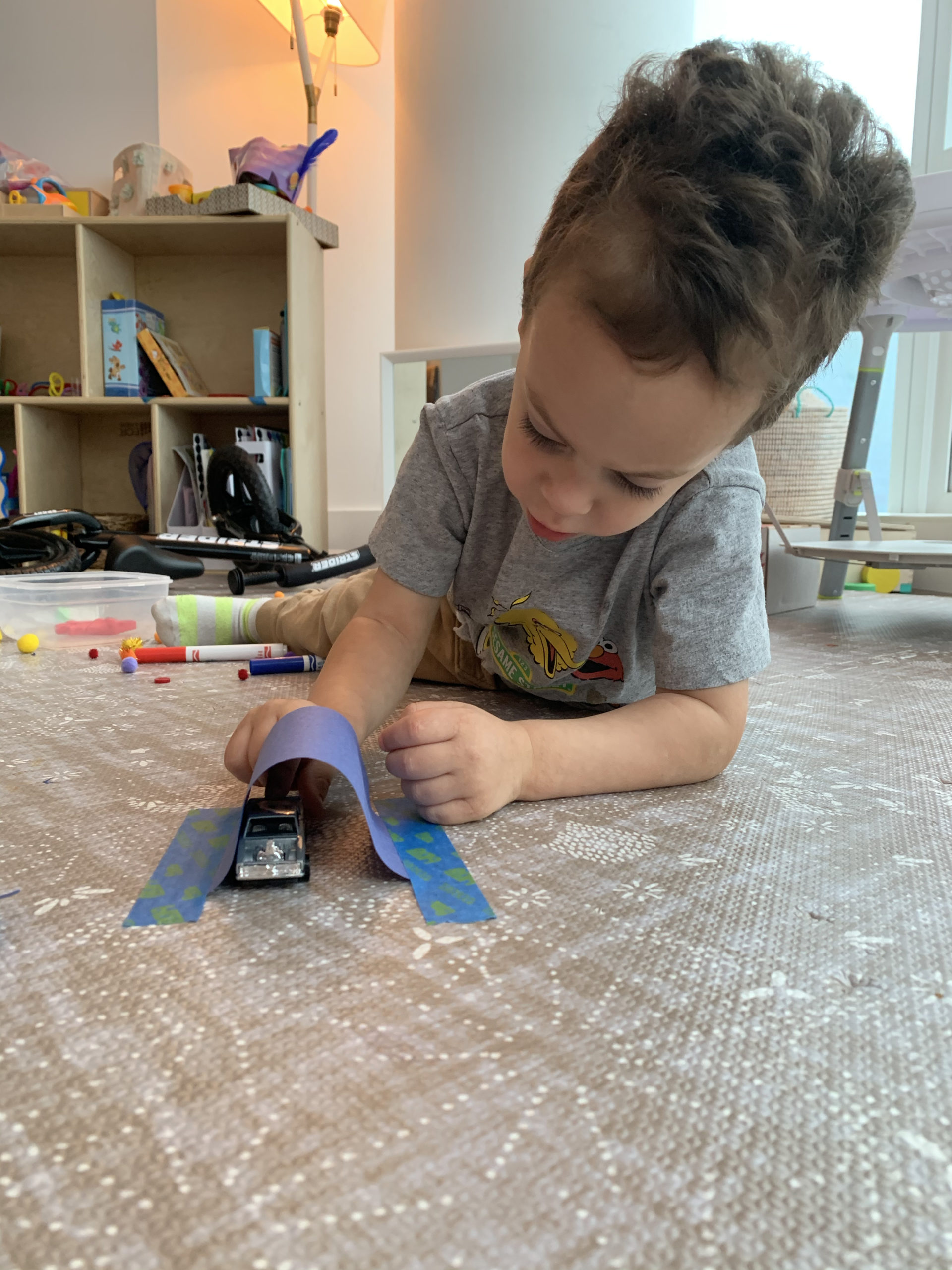 Cut 2-3″ segments of a paper towel or toilet paper roll and tape them to a table or floor with painter’s tape – another car tunnel, yay! 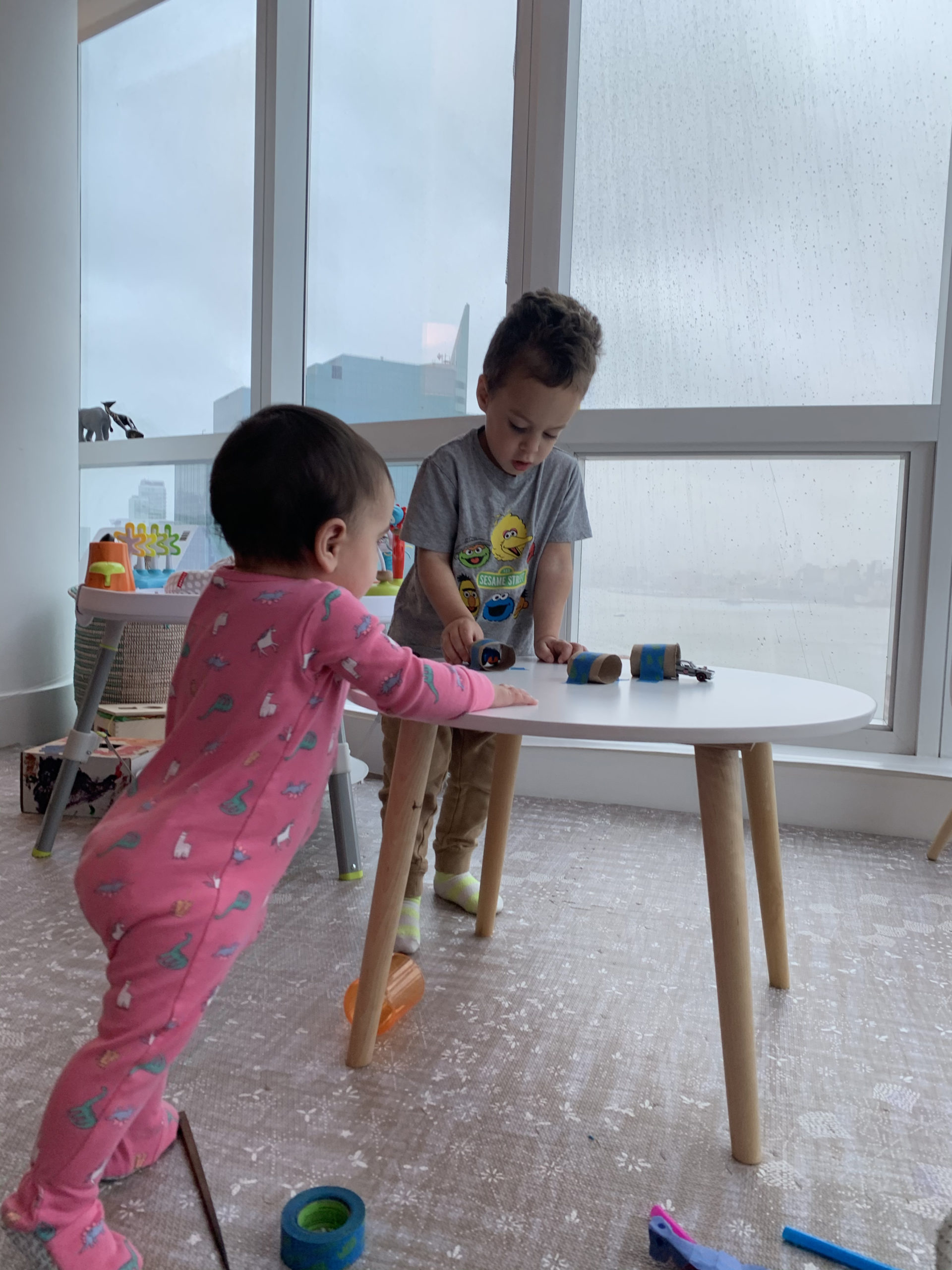 This has been Luca’s favorite activity lately. He actually plays independently with it, which is a brand new thing for him – he usually needs an adult or other toddler nearby while he plays or he loses interest. We’re working on it!

Basically, we took a cardboard box, unfolded it, cut the sides off and made one long track. We propped up one side to make a “ramp” and then taped it to the floor with painter’s tape. Using a Sharpie pen, I drew a racetrack/road. Luca lines up the cars and shoots them down the racetrack. He can play like this for an hour, it’s awesome! 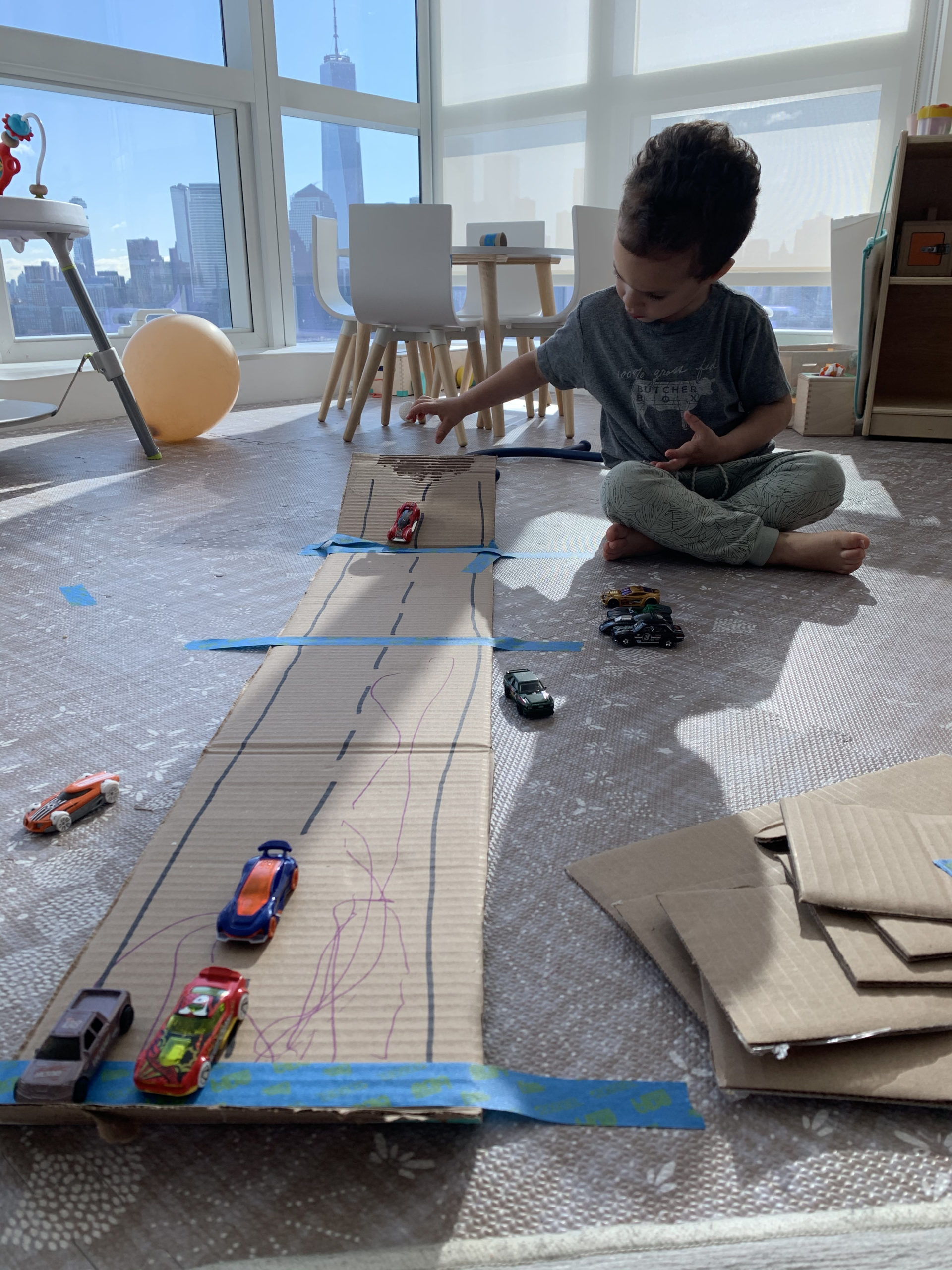 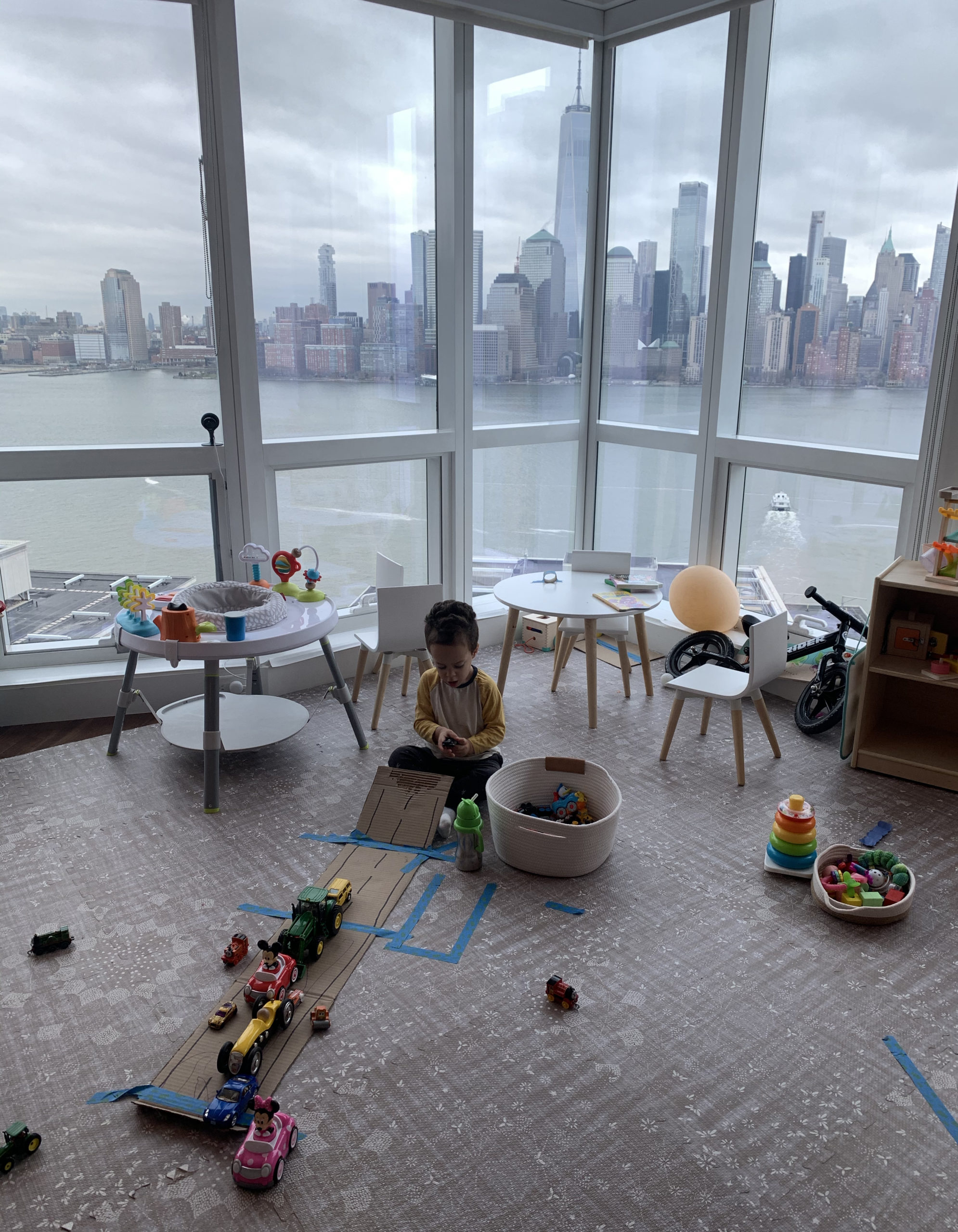 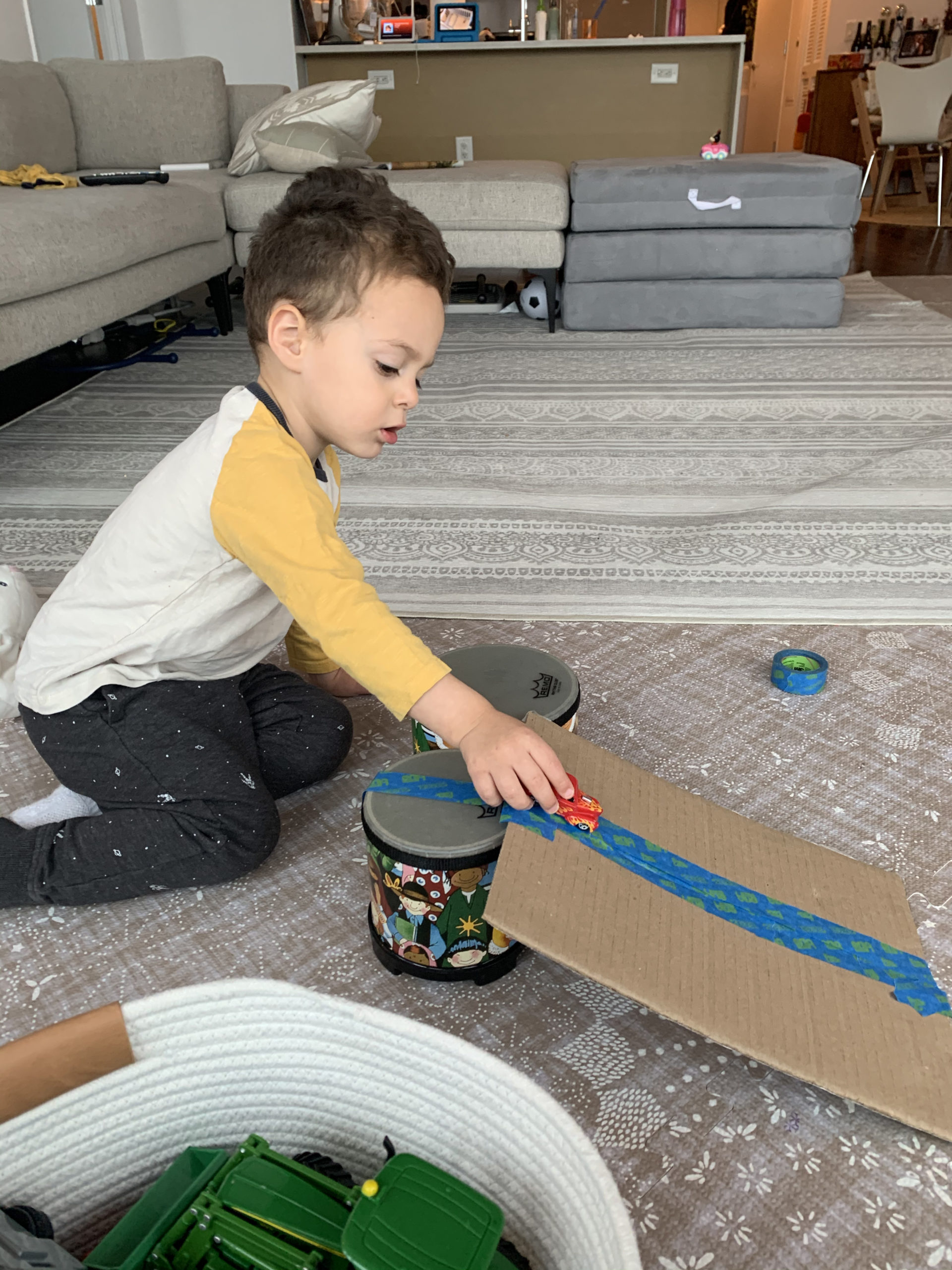 Cover the animals in snow

Take a cup of baking soda and about 2-3 tablespoons of water and stir with a fork until snow-like. Pop some animals or figurines or cars into a muffin tin and let your toddler scoop the snow and cover the animals. Added bonus: make a bath for the animals in a sensory bin afterwards and let him clean all the animals! 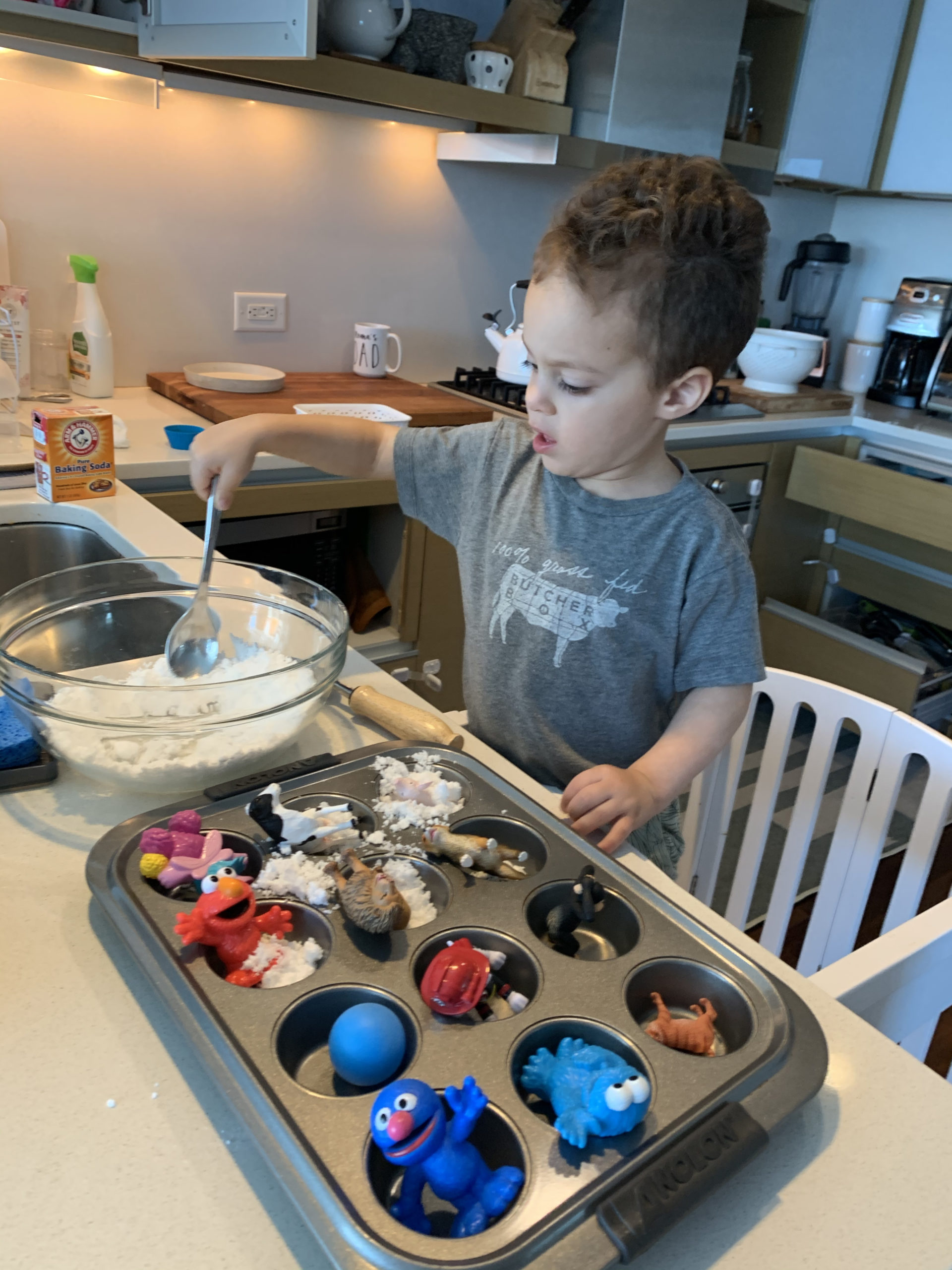 Toy wash in a sensory bin

Every time we do a messy activity with his toys (toy cars, animals, figurines, etc), Luca loves to wash them. I put a bowl of soapy water next to a bowl of soapless water (like, just water) and give him a rag or paper towels and let him clean his toys. He loves it and it keeps him busy (alone), so I can have time to myself to clean up the activity that necessitated the toy wash, haha. 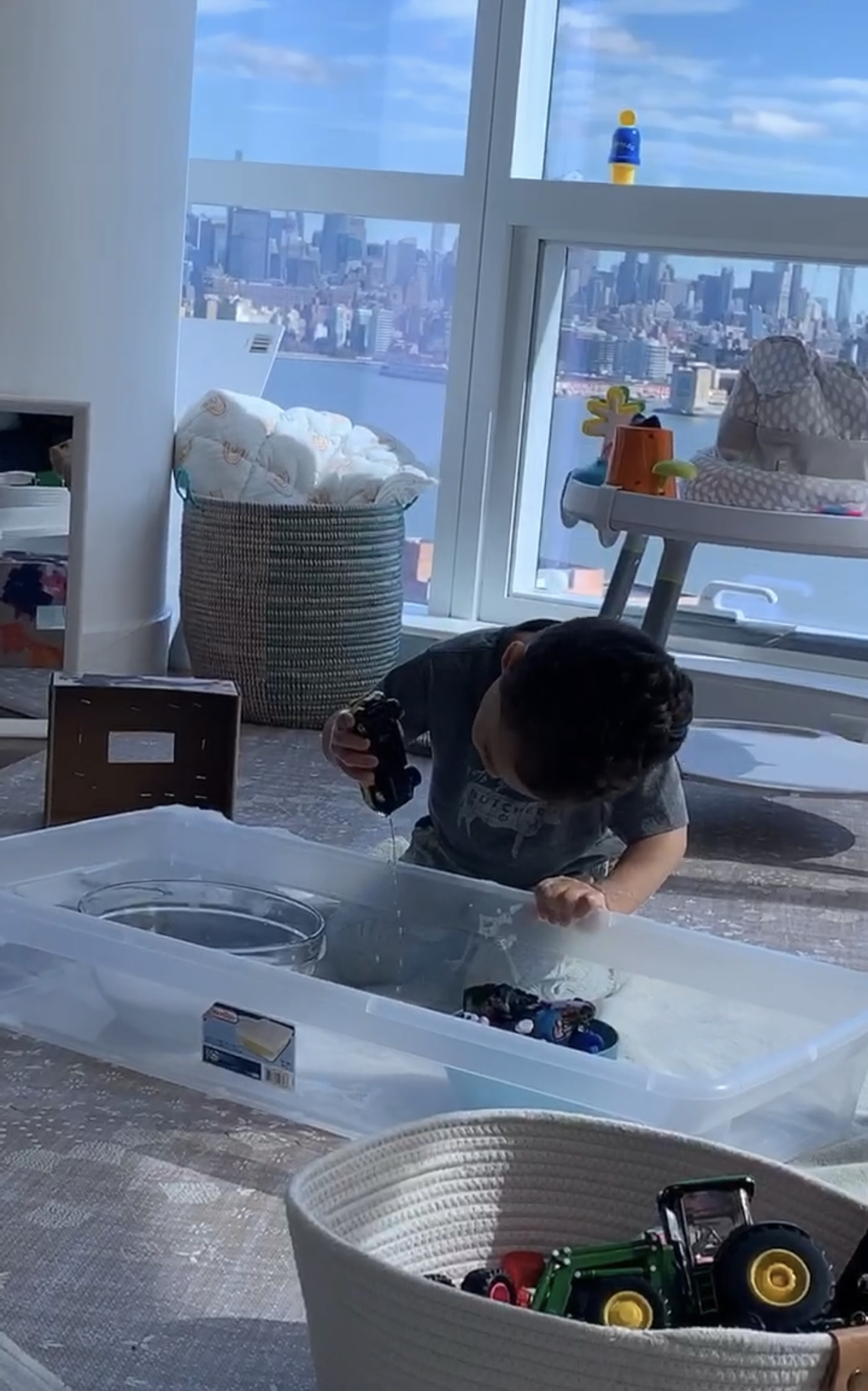 Part snack, part activity, this is great to calm your toddler down, after a lot of physical activity. Whenever Luca has been running around and get rambunctious, I find that settling him down a focus-based activity is best, because he usually wants that calm and structure. I love this, nbecause he loves snacks, so he gets immediately interested.

You don’t need to use a cardboard box, but we happened to do so here. Place Play-Doh down and smush it so it’s kind of like a log. Put a couple toothpicks in it and give your toddler Cheerios or some type of O’s (we love Power O’s!) and let them stack them. 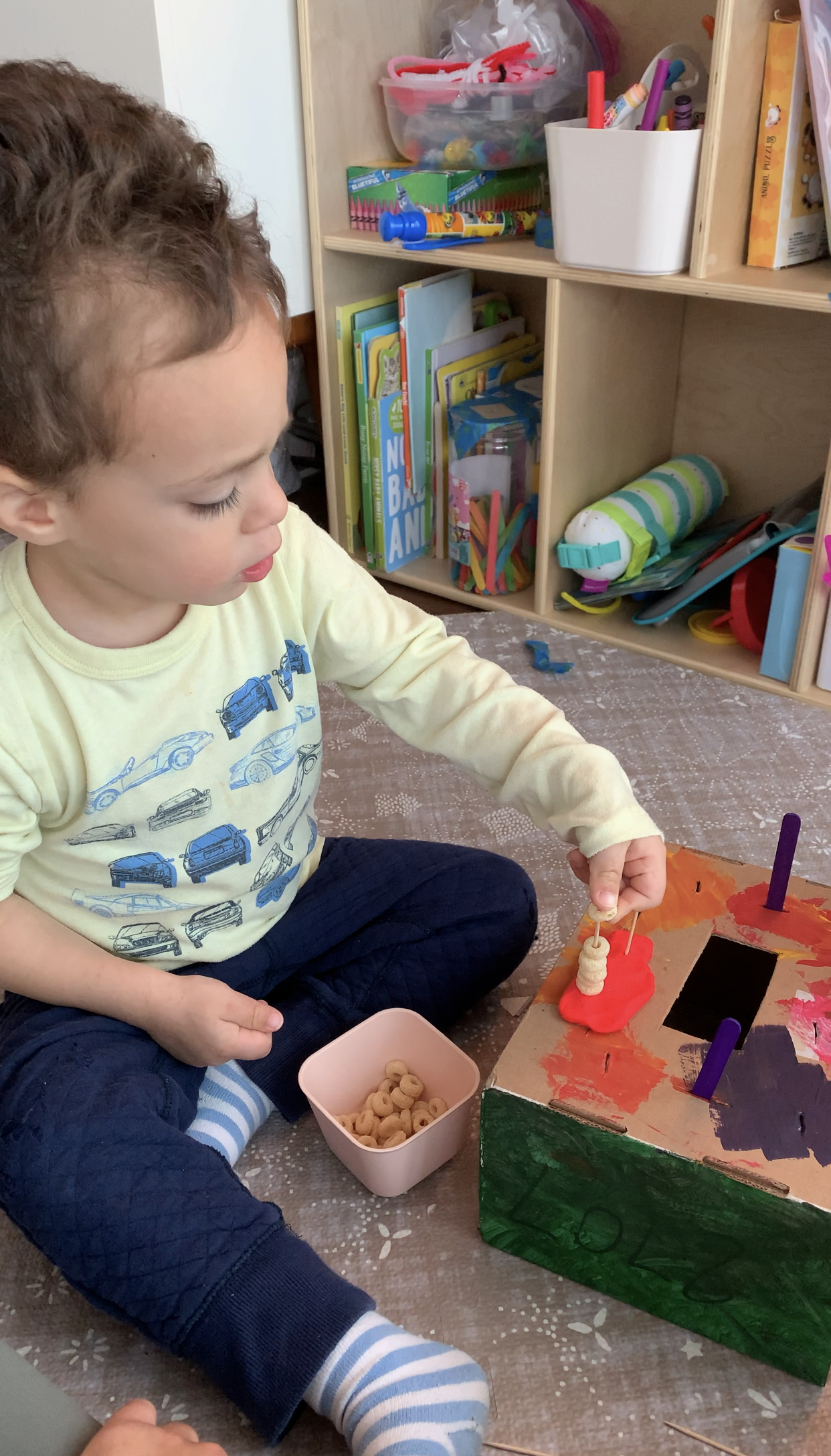 If you know me, you know I don’t like to bake (I prefer to cook!) Whenever I do bake, it’s usually from a box – and Luca helps! I find the Simple Mills baking mixes are great for this, because they are simple, easy, and healthy. I love baking around snack time so that once the food is done, we can have it as a snack together (their Pumpkin Muffins are insane!) Plus, this has helped him learn how to crack his own eggs! 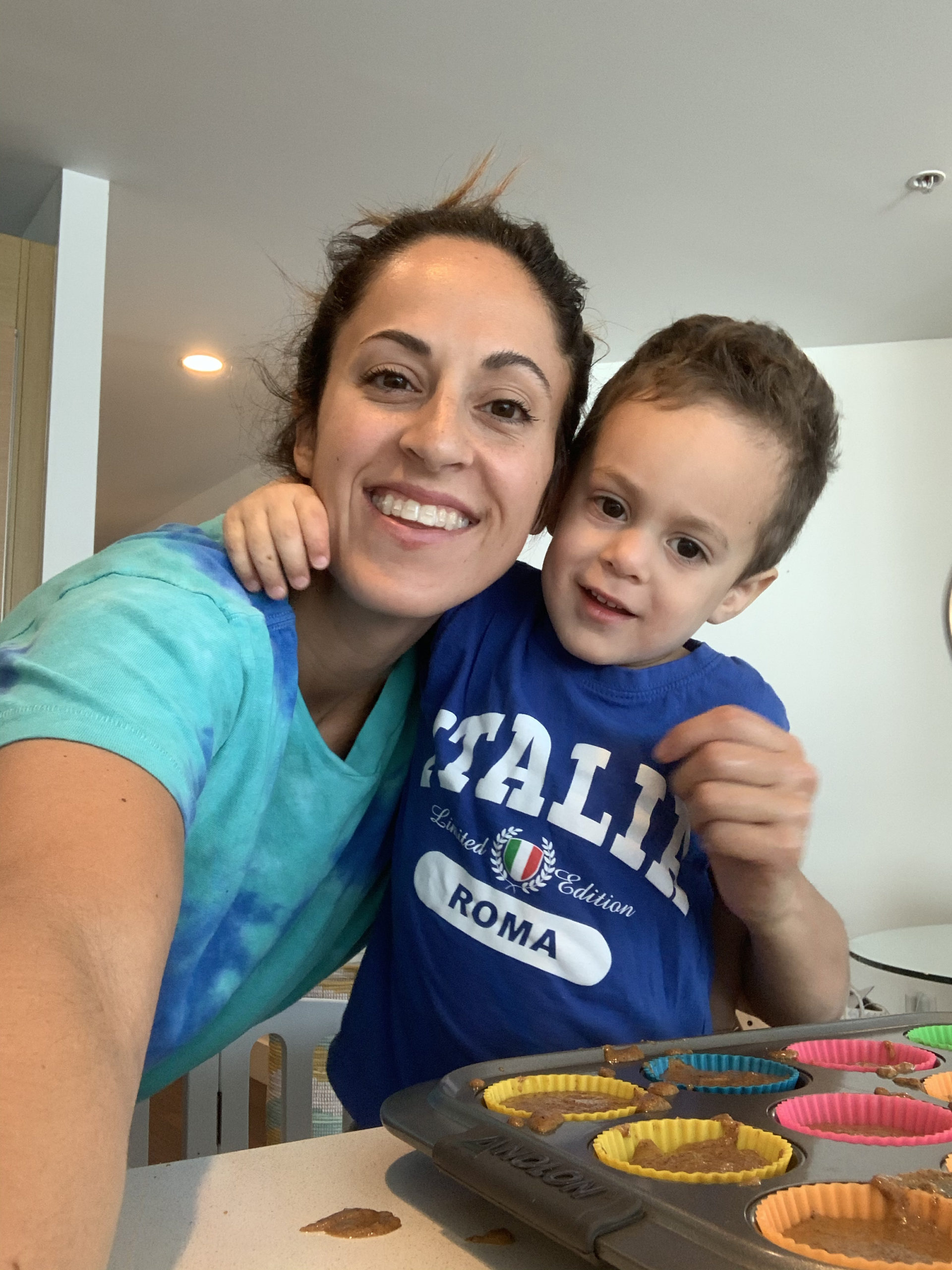 This is sort of a mini activity, usually done around naptime or lunchtime. I have him peel a clementine himself (either I peel the clementine and give him the fruit to separate into segments OR he does the whole thing himself) and then I give him his toddler knife and let him chop up a half banana. We toss the clementine with the banana in a bowl and enjoy as a snack! 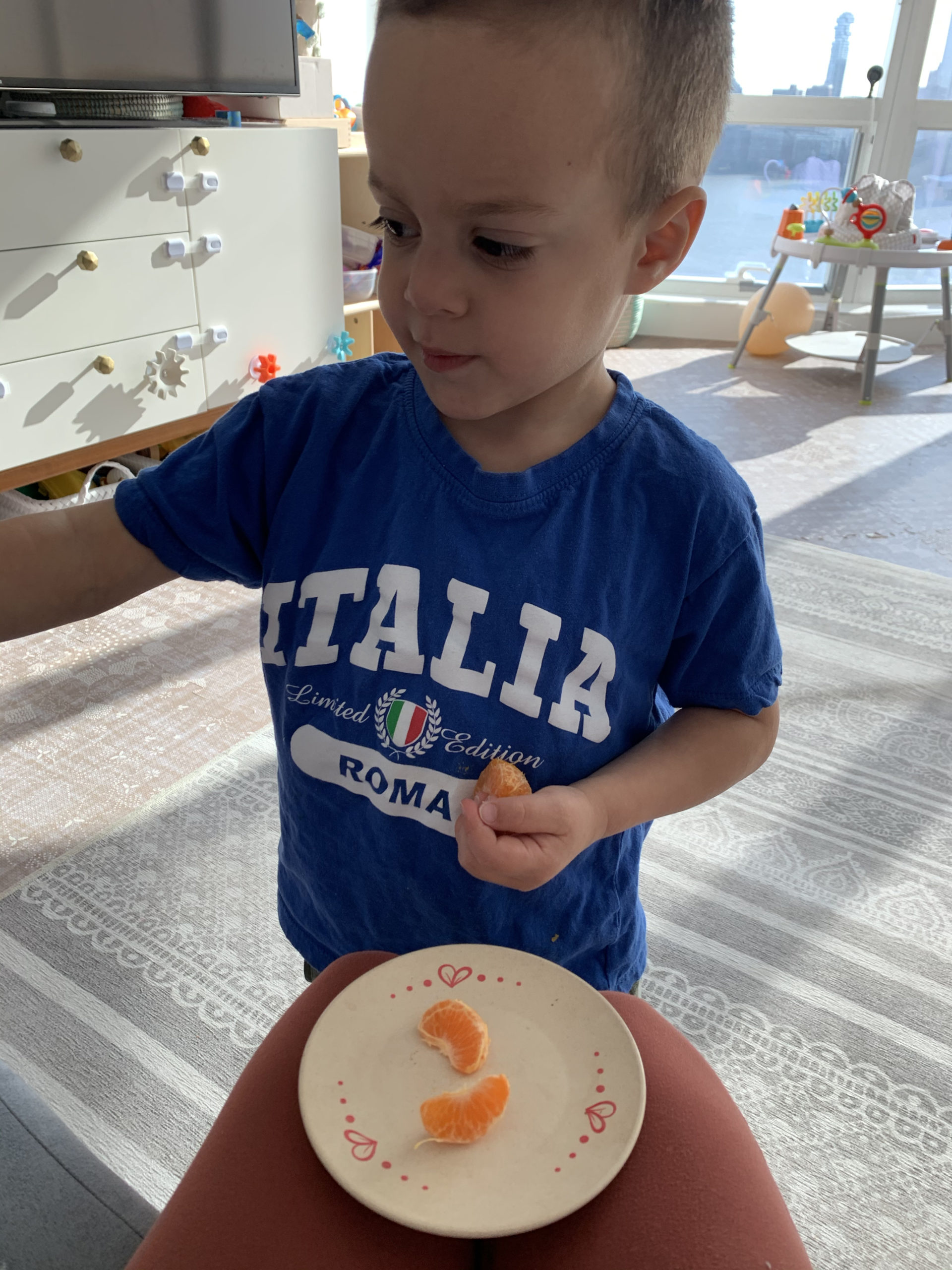 So, this is “screen time”, but when you can’t make it to an actual class, put this YouTube music class on and it will entertain your kids! Have some noisemakers ready (little shakers) to get them really interacting!

Luca loves exercise! Sometimes I’ll just literally do jumping jacks with him or he loves stretching. But if I want to not have to lead a fitness class, I’ll put on Cosmic Kids Yoga – he follows it well and loves the stories. 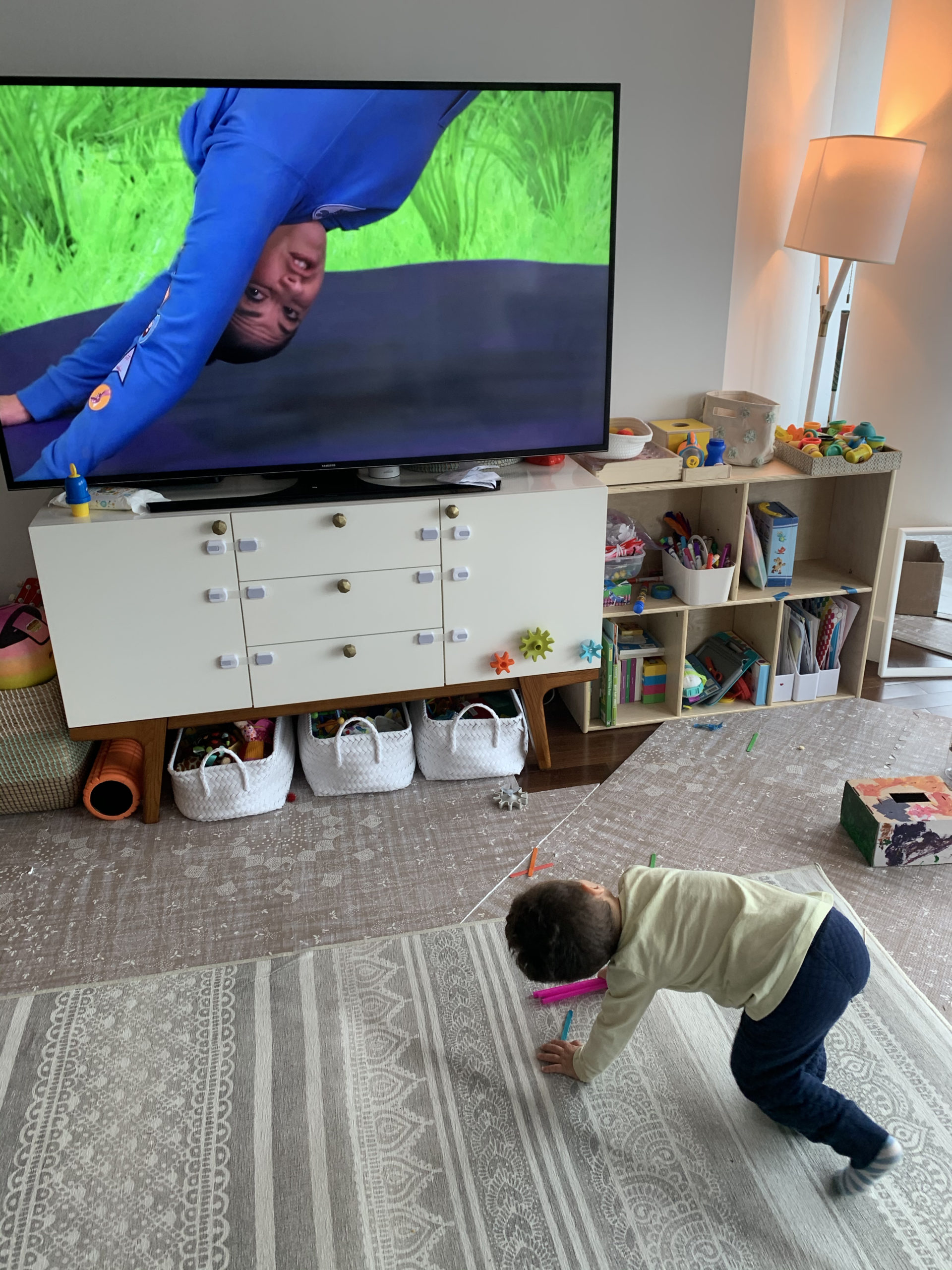 Honestly, I never considered this an activity, but toddlers love feeling useful. We use non toxic cleaners in our home, so I feel comfortable having Luca help. I figured out that he LOVES spraying disinfectant spray and wiping, so I will literally have him spray for me and I’ll wipe. It kills two birds with one stone, and especially in areas that I have to bend down to get, it’s nice.

Also, if you’re mopping the floors, put two pieces of paper towels down (or two rags) and under each of your toddler’s feet and let them “dry” the floor. Luca also loves cleaning and drying dishes, so I’ll have him help me with that.

He will spent 10-15 minutes cleaning his scooter (which we do every time we come home from the outside, since he loves to ride the scooter outside.)

And that’s it! What kind of activities are you doing with your toddlers? 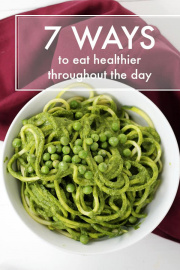