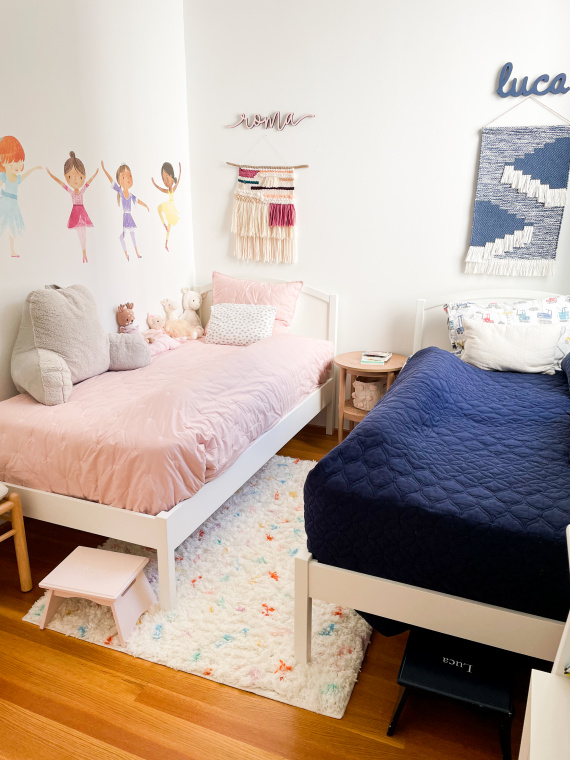 Family
This summer, we transitioned our toddlers (aged 2 and almost 4) into the same room, so that we could free up a room for their baby brothers arriving later in the summer! It was a transition to say the least and here's how we did it, how it went, and what we learned in the process.
share this post

When we found out we were pregnant again, we decided we’d just keep our baby in our room and not deal with putting our toddlers in the same room, as we did with our daughter Roma, in our old apartment. Then, we found out we were having twins (!!) and knew that there’d be no way to make it work without putting the toddlers in the same room together.

There was a lot of anxiety leading up to the transition, but also excitement. I never room shared growing up, but I always thought it was sweet when siblings shared a room (especially bunk beds – something about bunk beds were so thrilling to me!) I knew there would be a transitional period, but I knew it would only strengthen Luca and Roma’s relationship.

Preparing for the transition

For months, I started telling Luca and Roma that they were going to be sharing a room. They never seemed upset or concerned, they only felt excited. I just kept telling them that we were going to do it soon, just so it would be on their radar. I always feel like with any toddler transition, the best thing you can do is mentally prepare the toddler by telling them exactly what’s going to happen so that when it does happen, they’re like, “Oh ya, I knew this would happen, no big deal!”

Aside from telling them, we got Luca a new bed (he had been sleeping on an old daybed) that fit perfectly in the new room. Along with that, we got both of them their own wall decals, which we put up the day before the transition happened, to give them something to look forward to and to create two separate little spaces for them. We got ballerina decals for my daughter and construction vehicles for my son.

At this point, Roma was still in a crib, so we didn’t buy her anything new, aside from the decals. 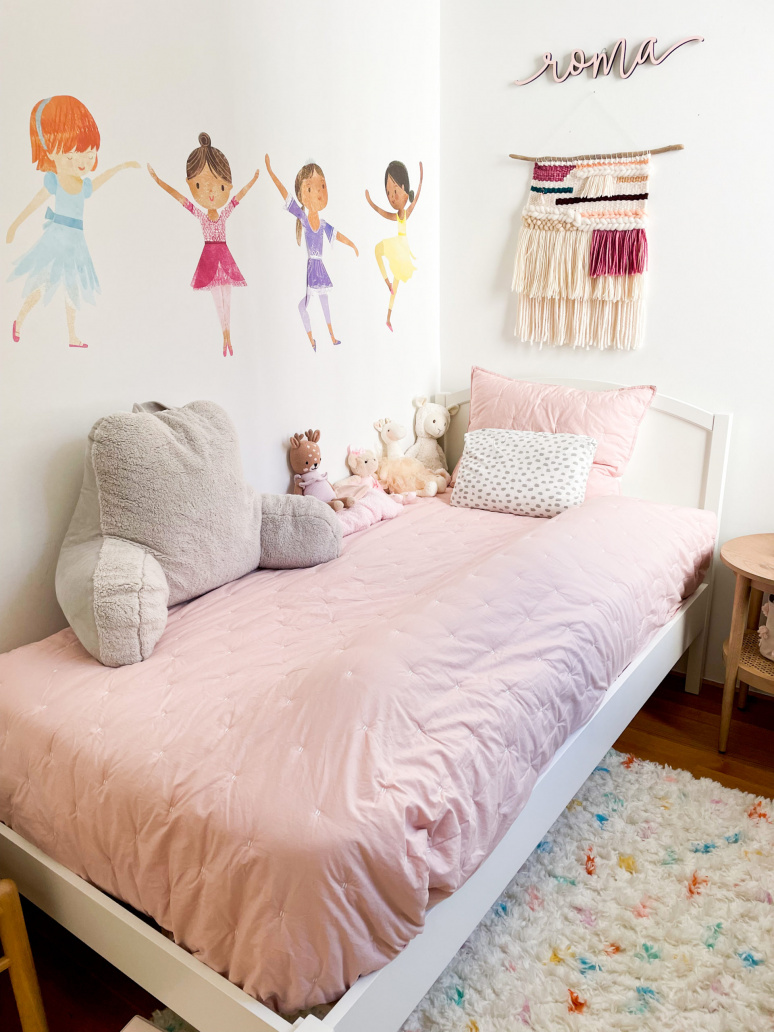 So the day after Roma turned 2 (June 15th), we took away her pacifier. We were over-ambitious with the transitions (potty training, room transition, and a new nanny all within weeks) and we should have never taken away her pacifier. We thought she was okay without it (she was falling asleep on her own without the pacifier for about a week and a half before we did the room sharing transition.) I think the room sharing put her over the edge and it resulted in a total sleep disaster for about 5 weeks.

She didn’t have her pacifier during the room sharing (we transitioned them July 4th weekend, so she only had a few weeks under her belt of pacifier-free sleep.) In hindsight, I wish we had skipped the pacifier removal and just gone straight into the room sharing transition. But alas, we gave in to pressures from our pediatrician and ignored our own parental instincts. It is what it is! You live and you learn.

So the night of the transition (it happened on July 4th weekend), we had everything set up and ready to go. We ended up reading books in Luca’s bed together. Once books were done, we put Roma in her crib, tucked Luca in, turned on their white noise machine and walked out. It actually went really well….. for Luca. Luca fell right asleep, within 15 minutes. And Roma was quiet. We thought we were parents of the year!

Then, right after Luca fell asleep, Roma started crying hysterically, jumping up and down in her crib. She would lay down after we’d come in to pacify her and then she’d be back up screaming. Miraculously and incredibly, Luca never woke up during any of this. However, we couldn’t obviously sleep through it. The first night, she fell asleep just short of midnight, after we just let her cry for 15 minutes straight. 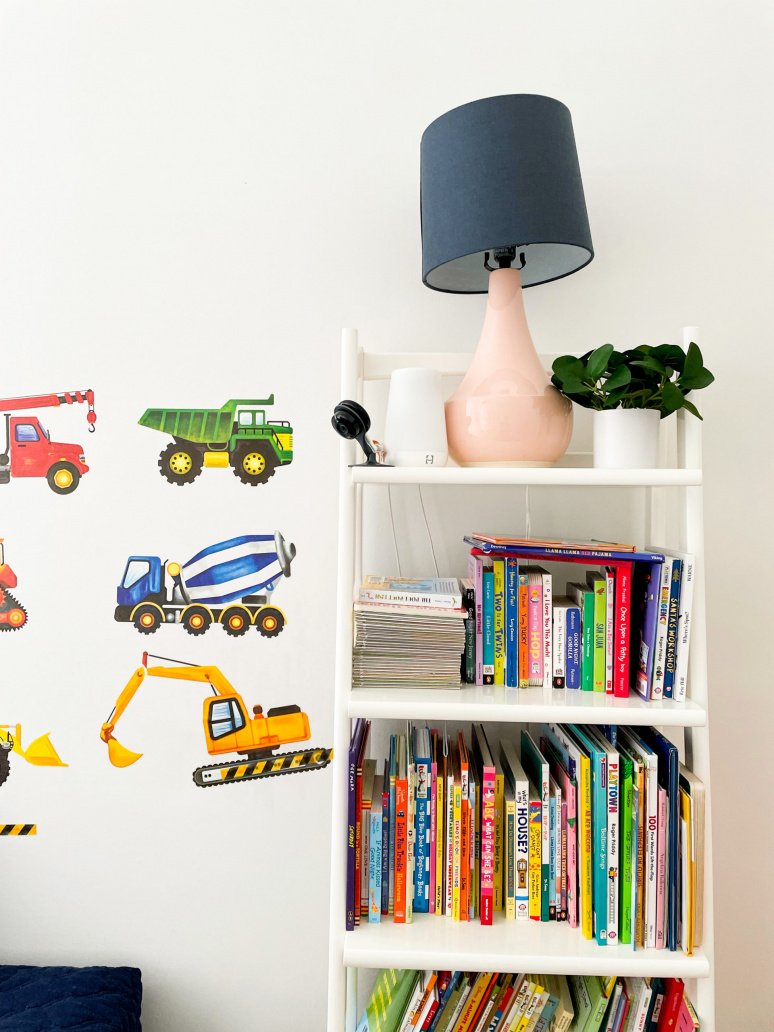 Then Roma jumped out of her crib

Needles to say, the first night was awful. And frankly, for the next week, it was awful. She was either screaming hysterically after Luca fell asleep (he always fell asleep quickly, as he doesn’t nap anymore and was always exhausted by bedtime) or she was sitting up in her bed playing for hours and then would start to cry again. Her bed times were between 9 and 10pm, by the time she’d fall asleep.

And then, she did it. Roma jumped out of her crib! She was actually pretty graceful about it, and if you want to see it all go down, I have a highlight on Instagram where I captured it on our Nest cam. Then, Lu slept on the floor next to Roma until she fell asleep that night, to make sure she was okay.

The next day, we went through the same issue – she climbed right out of the crib. So, we transitioned her crib to a toddler bed at around 9:30pm by taking off one of the sides and putting up the transitional bed piece (like a little side rail.) Apparently we could’ve dropped her crib to the floor, but since we were having such issues with her sleeping, we just figured it was either time for a big girl bed or not, we weren’t going to delay the inevitable any longer. Miraculously, at around 10:15pm, she fell asleep, after a little coaxing from Luca. 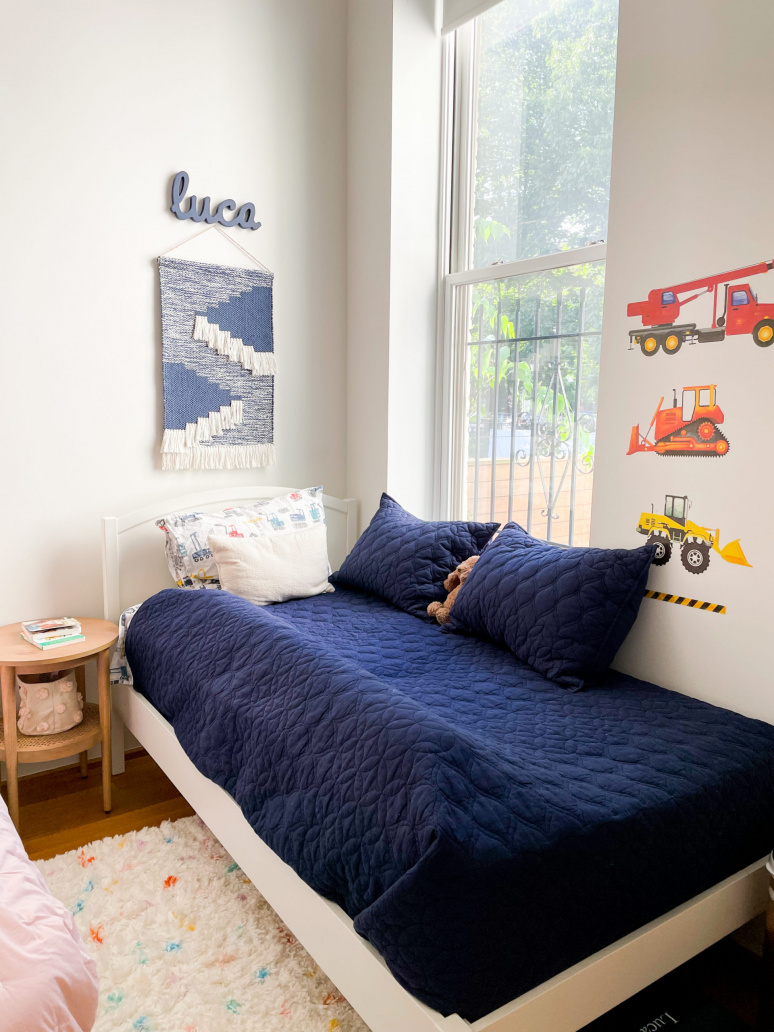 The next stage: nighttime wakeups and no naps

Once she could get out of her crib, it was just a mess. Nothing worked. She was coming out of her bed and into the hallway or she was touching and playing with everything in the room (she was even turning the lights on, while Luca was sleeping!) We tried everything, every gentle training method. We let her cry, too. She just was persistent. And it was tough, because she would start to get into Luca’s bed or start to annoy him and wake him up and we didn’t want to deal with two awake toddlers (and Luca especially needs his sleep, since he was in active camp all day and didn’t nap!)

She was up late (until 10 or 11pm) and then the worst started happening: she started falling asleep and then she’d wake up hysterical either at 12am or 3am and be up for 2 to 2.5 hours. She was averaging 7-8 hours a sleep a night and then she started having a hard time with naps, not napping, or taking 2 hours to fall asleep at nap time and then we’d have to wake her up, in fear of ruining her nighttime nap.

Finally, we gave back her pacifier and the rest is history

One day, I started hallucinating in the middle of the day. I literally was talking to our nanny in the kitchen and I saw her face divide into two – I was seeing double! At 8 months pregnant with twins and about to be even more sleep deprived, I knew I couldn’t let this go on.

I also had one last “trick up my sleeve,” which was putting her in a big girl bed just like Luca’s (the same bed) in hopes that it would make her feel equal to him and she’d act like a big girl and go to bed! Well, the day before the bed came was the day I hallucinated and in desperation, I called a sleep consultant and she told me that we either commit to continuing along with sleep training and it’ll be a brutal 2-3 weeks OR we take one step back with the pacifier and give it back to her so she can soothe herself to sleep.

So the night before her big girl bed came, after finishing our bedtime routine (bath, books, and songs), I gave her the pacifier and told her that I know she’s having a hard time falling asleep, so I’m going to give her the pacifier back to use “just for sleep.” And I told her that when she wakes up, we’re going to put it back in her “paci bin” and she can’t have it until the next time she sleeps. I also told her that if she gets out of her room, we have to take the paci back.

She fell asleep within 5 minutes of us leaving the room. I almost cried.

She slept through the night and generally speaking, she has stayed in her bed and slept through the night ever since (it has been about 3 weeks!) There have been a few nights where she has come into our room in the middle of the night and we just walk her back to her room, find her the paci (it either falls on the ground or gets caught in her blankets) and she goes right back to sleep, no problem. She also goes to bed with no fuss every night.

I’m curious how the transition would have gone if we had never taken the pacifier away. Maybe it would’ve been brutal and the pacifier coming back into her life is what made everything, in he end, work. We’ll never know, but all I know is that we’re finally in a great place and everyone is sleeping well. The twins are due in 2 weeks (aka any day!) and I’m just thankful we’ve made it through these transitions. 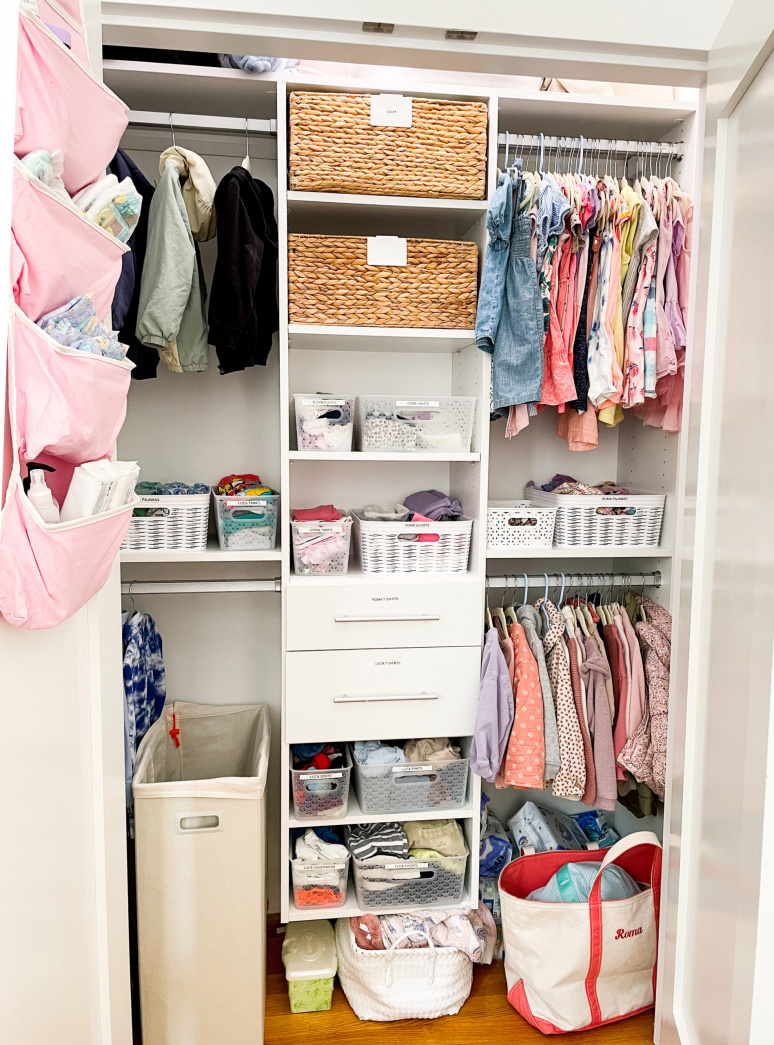 And now, Roma and Luca love their room together! With some creative storage and organization, I was able to easily fit all of their clothes together in the same closet. I decided to remove any “entertainment” outside of books and whatever toys they bring to bed (Luca always sleeps with about 10 assorted toys and trinkets.) I did this because I made a little play area right outside their room, in the hallway, and I wanted their room to be a place that they just sleep in. I wanted to really zen it out and I wanted them both to associate their bedroom with bedtime.

And of course, I wanted to eliminate any temptation to play in the middle of the night or to delay bedtime with toys.

Here’s how it all went down:

And that’s it! That’s how it all went down. Let me know if you have any question about how the transition went. 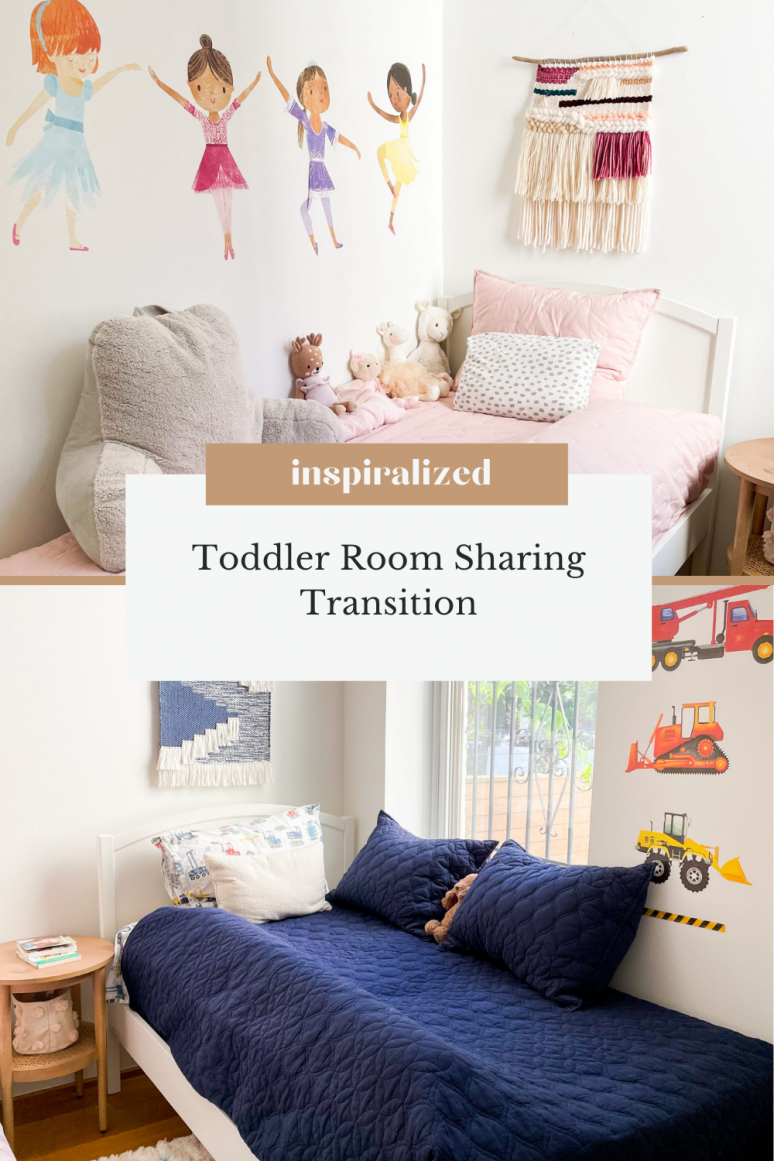 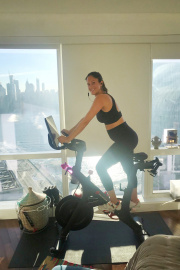