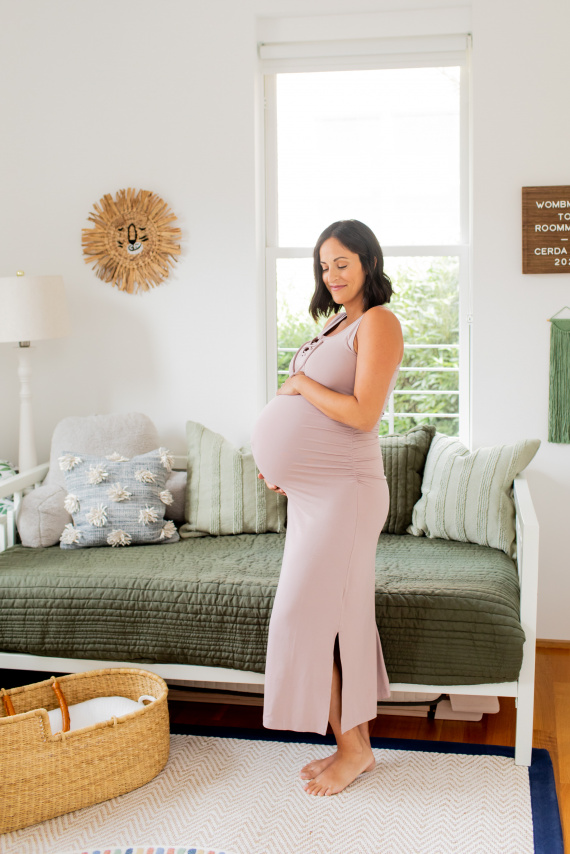 Today I'm sharing our twins' nursery, with a sage safari theme, incorporating lots of neutrals and sage colors with a hint of safari animals for whimsical baby fun.
share this post

Since this will be my last and final nursery, I wanted to create a space that I really loved. With Luca, our first, I went with a “zen palm” theme, meaning, something relaxing with a bit of palm inspiration with neutrals and palm leave wallpaper. With Roma, we had to put her in our room for a year so she never had a proper nursery, but we did our best to make the space feminine and cozy. 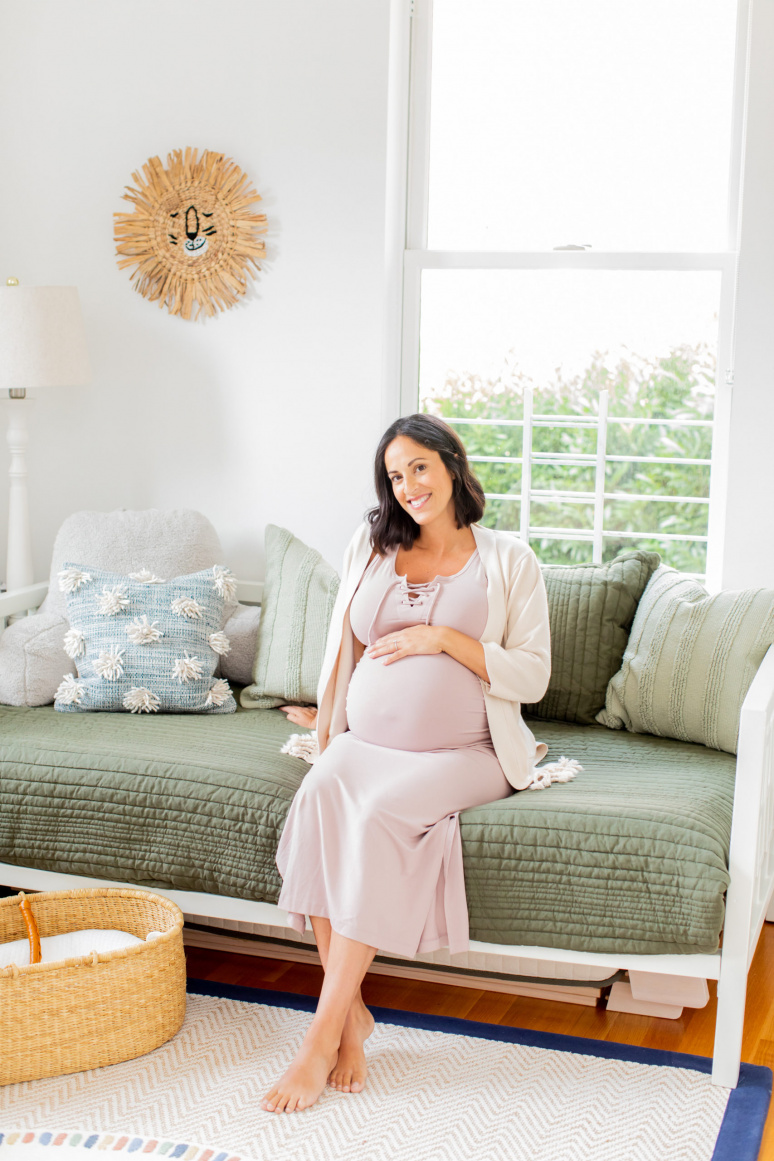 I’ve really been loving neutrals and greens (our new branding will reflect these same colors, ironically!) over the past year, so I wanted to incorporate those colors in the twins’ room. As I started mood boarding, I realized the sage neutral colors I was seeing reminded me of a safari outfit (you know the look – a green utility jacket, khaki cargo shorts, etc.) Then, I started to lean into that with some small accents that brought that theme to light, such as a cheetah lamp, lion wall hanging, and safari animal rug. I also wanted to pull in the navy from the rug, so we went with these wallpaper decals.

This room used to be Luca’s room, but then we had to combine Luca and Roma in the same room to accommodate everything we needed in the twins nursery (changing table, daybed, glider, and two cribs at the very minimum.) From Luca’s original nursery, I included his changing table with topper, which I covered in green wallpaper to change the look and go with the theme. I also included his original nursery rug (the navy trim color is no longer available.) 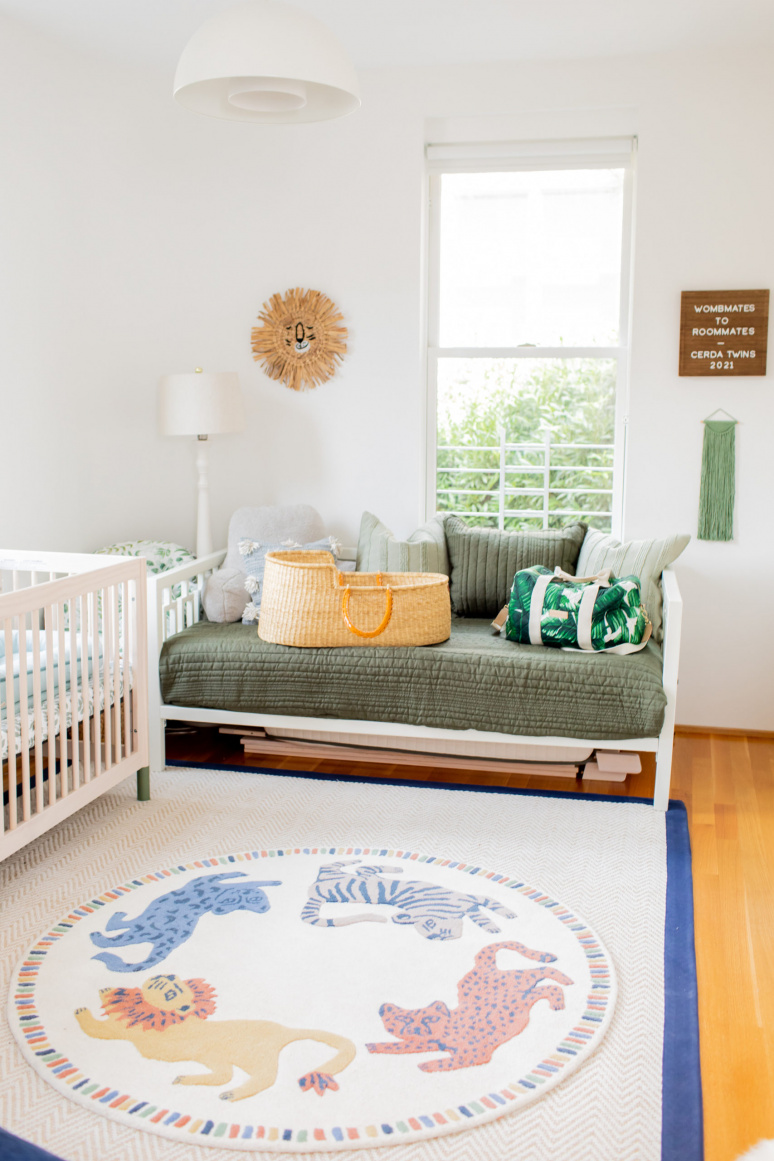 So why a daybed? This daybed was in Luca’s room as well and serves so many purposes, I knew I wanted the twins to have one in their nursery. We use the daybed for:

The daybed is old from West Elm (literally 4+ years old) and no longer in-stock, but the bedding is new:

It’s still surreal to look in the nursery and see two cribs. I don’t know when I’ll get over that! We’ve been using Babyletto cribs since the beginning! I love the quality, look, and feel of their cribs. This time around, not only are we using their Gelato 4-in-1 Mini Crib (in Natural/White), we’re using their Pure Core Mini Crib Mattresses as well. The only change we made aesthetically to the mattress was adding more of that same green wallpaper from the changing dresser to the feet of the crib. 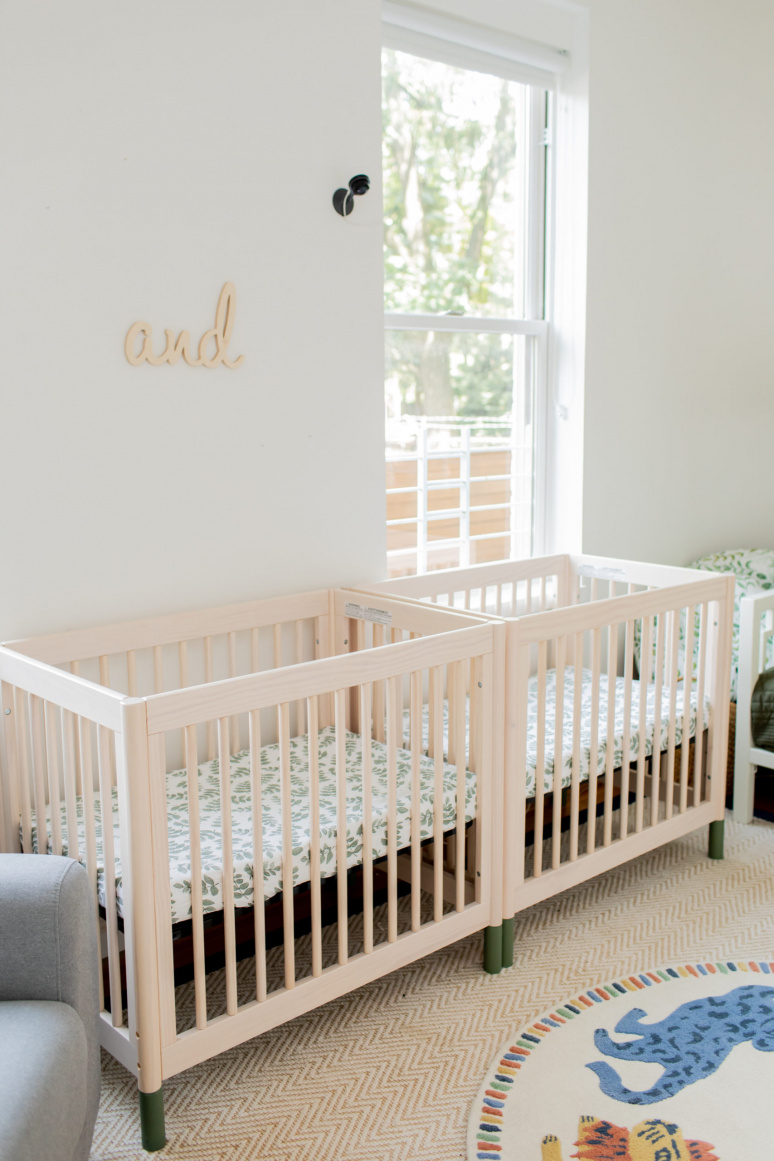 We put the cribs side-by-side along the wall and windows for now, but depending on how that affects their sleep (with one being directly under the window), we may switch them to stick outwards, laying perpendicular. We’ll see! We won’t know until we’re in it, of course.

For crib sheets, I found this cute fern pattern from Spearmint Love.

And above their cribs, you’ll see a wooden “and” sign. At the time that we took these photos, the twins are not born yet, and we haven’t revealed the names to friends or family (or anyone!) yet, so I haven’t put up their names but both of their names will be above and below the “and”, of course. We purchased the signs from this Etsy shop. 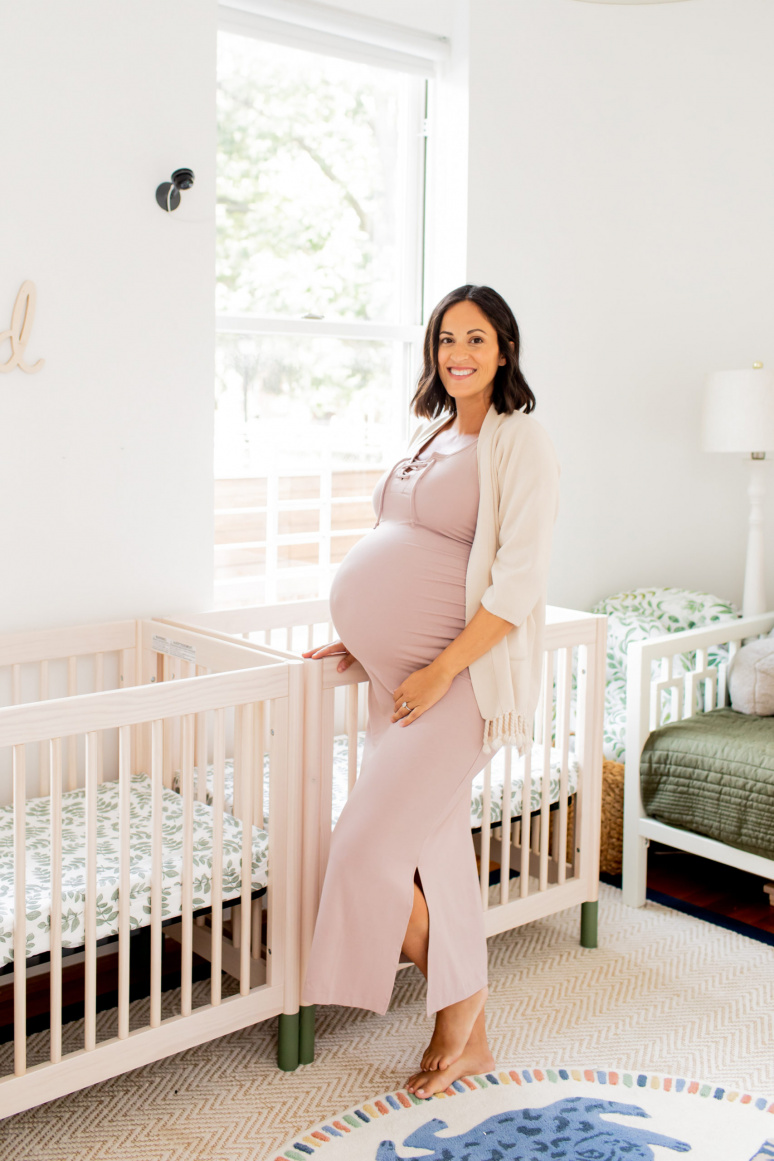 This is the same bookshelf that has been in Luca’s room since he was born. It’s such a beautiful bookshelf. I love the bottom drawer for storage, as well (right now I have bibs and quick grab-able nursing items and pacifiers in there.) I placed this bookshelf next to the glider chair, because I figure it’ll be kind of like a giant nightstand to keep everything I need while nursing or rocking the babes. 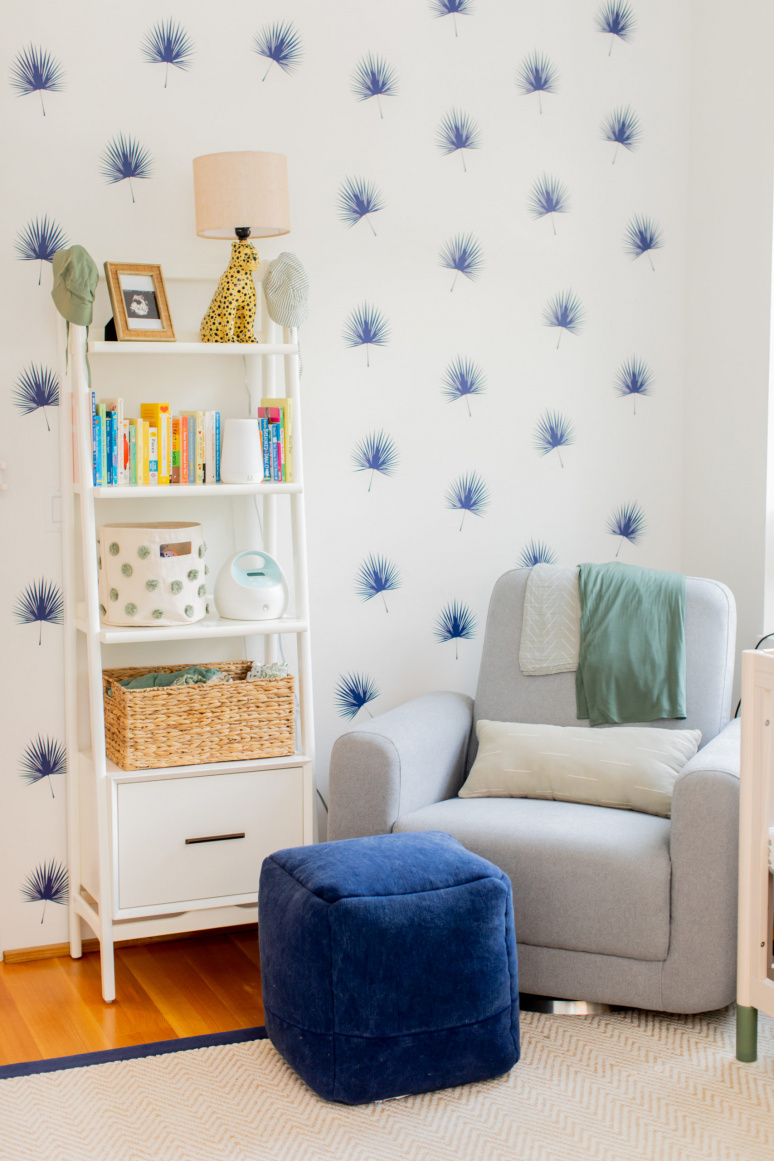 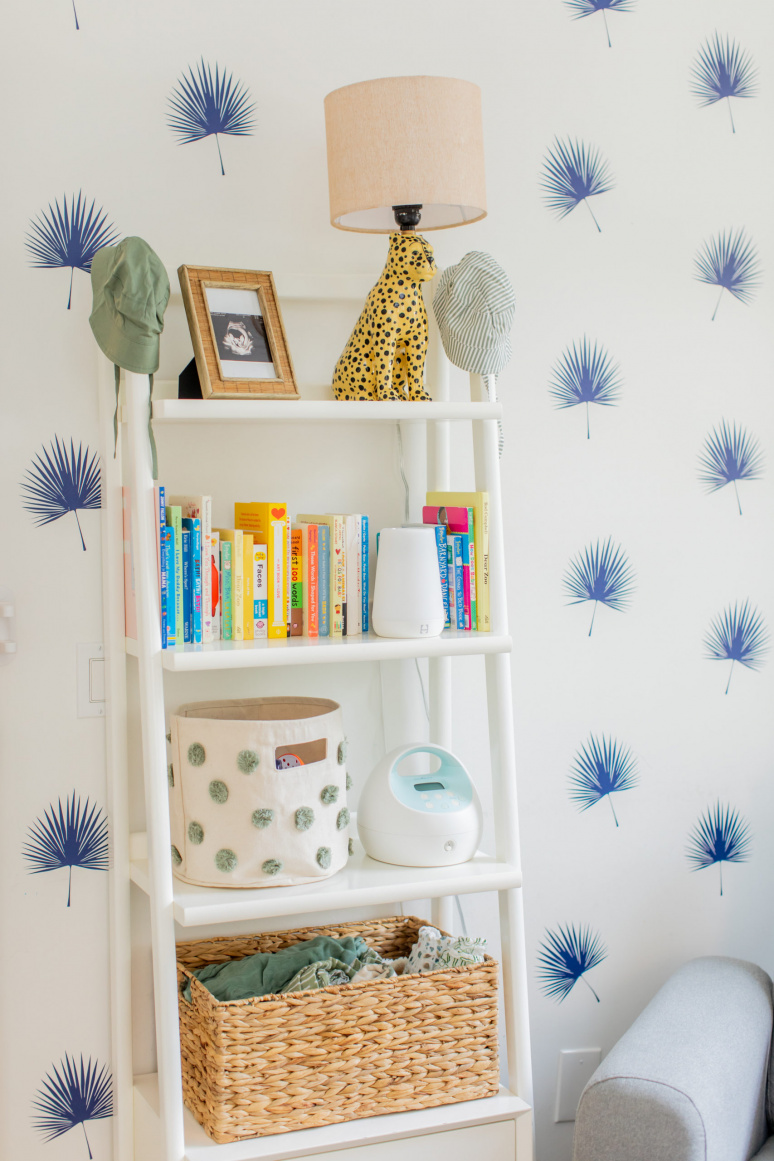 I debated over whether or not I should just get a reclining glider just to rock the twins to sleep and nurse elsewhere (I always told myself after Roma that if I ever had another child, I’d get a recliner for comfort) OR to get a glider large enough for nursing. Clearly, I went with a glider large enough for nursing – I hope! This is the Babyletto Tuba Swivel Glider, which is definitely much wider than a traditional glider. I put the twin nursing pillow around me and there’s room for two babies! 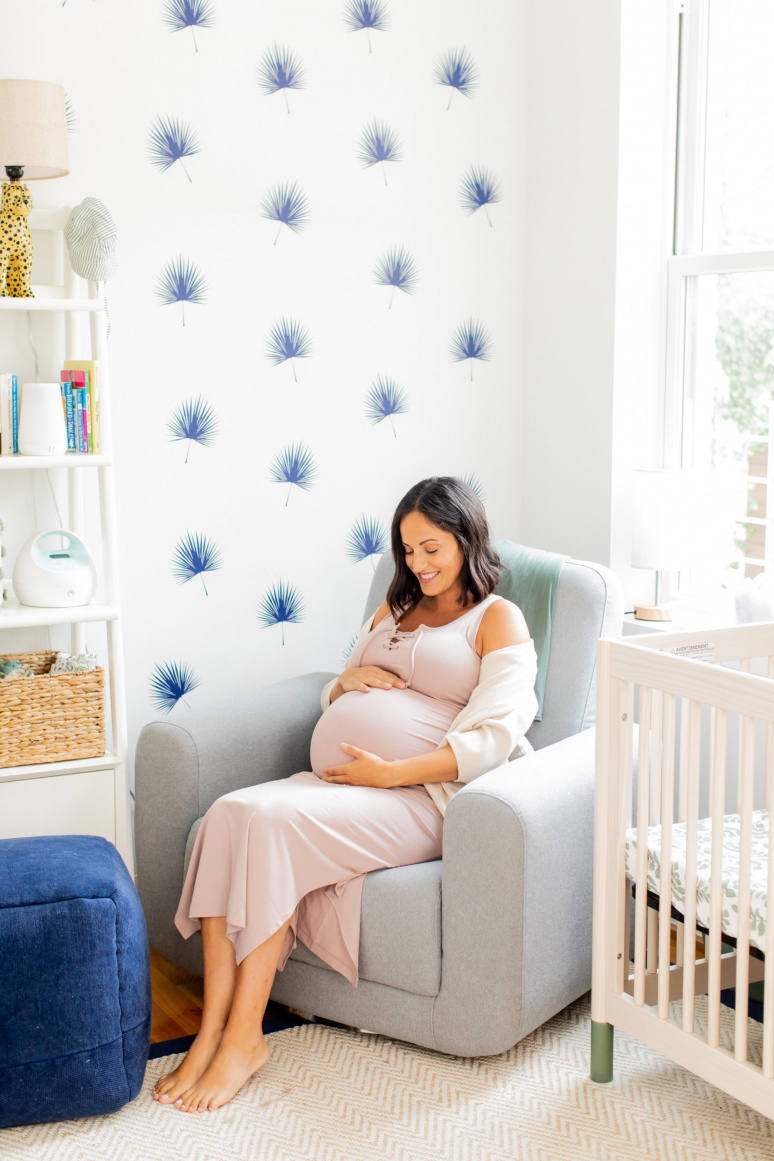 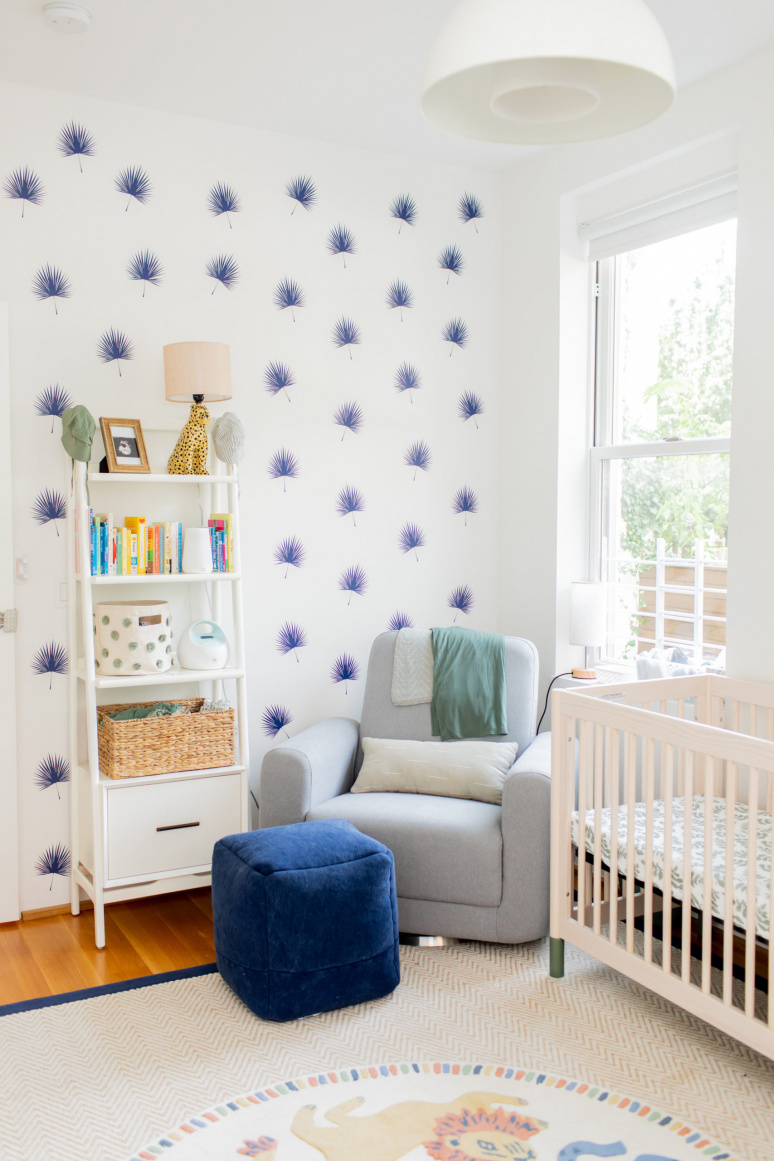 This area is pretty self explanatory! This is where we’ll change the babies (it still is surreal to say babies, plural!) We kept our changing table with topper from when Luca was a baby and I just wrapped it in green wallpaper (took a few hours!) The changing pad cover is by Caden Lane and it’s so soft. 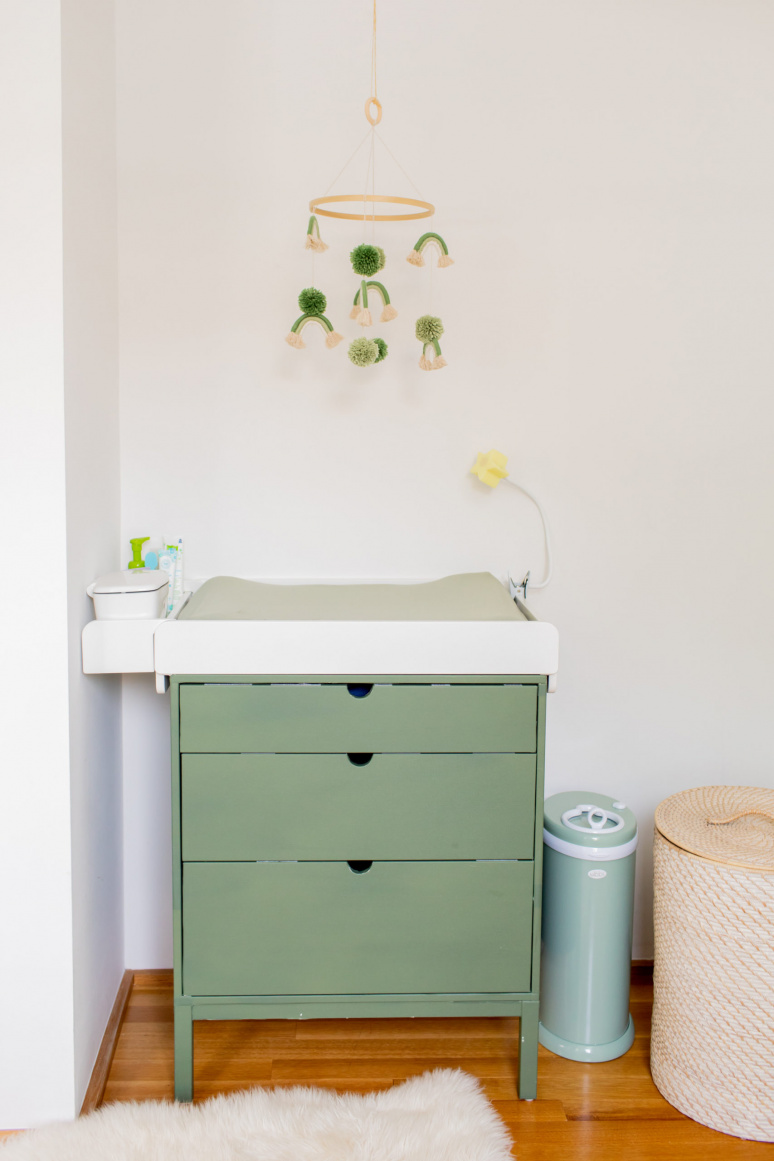 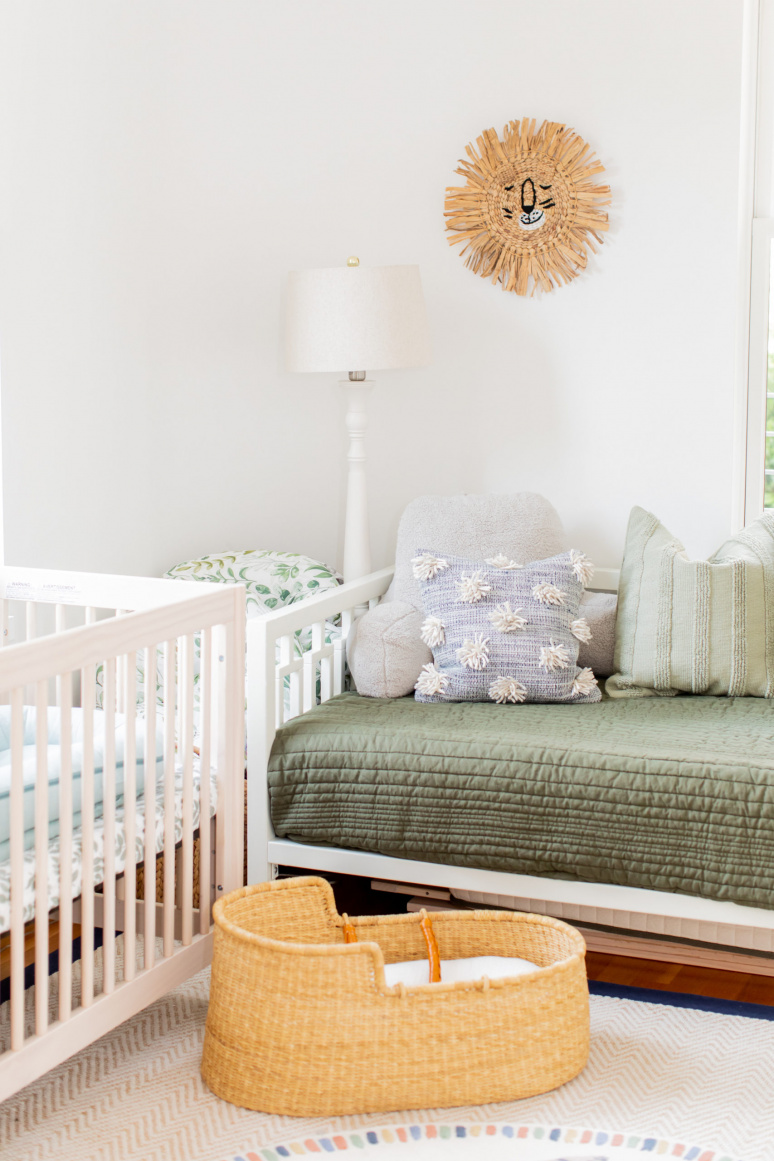 And that’s it! That’s the tour! If you’re designing your own nursery right now, I hope it gave you some inspiration. Thanks for the love and kindness – only a few more weeks until we get to meet the twins! 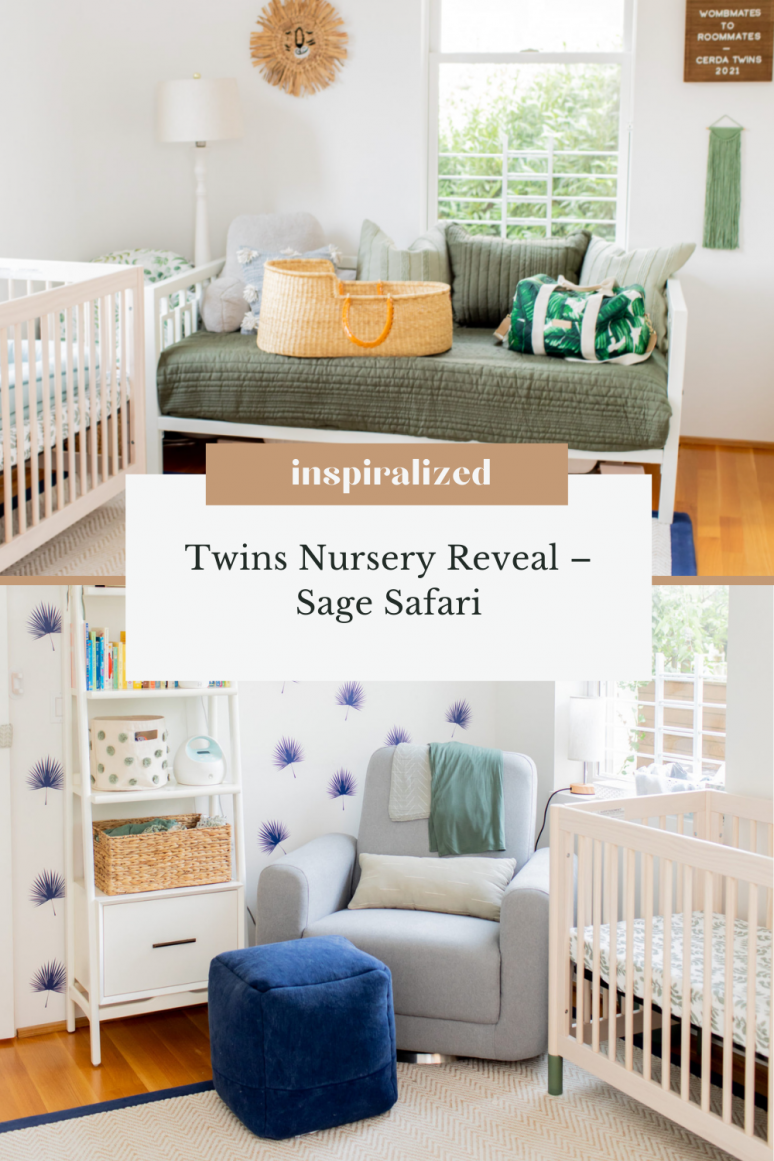