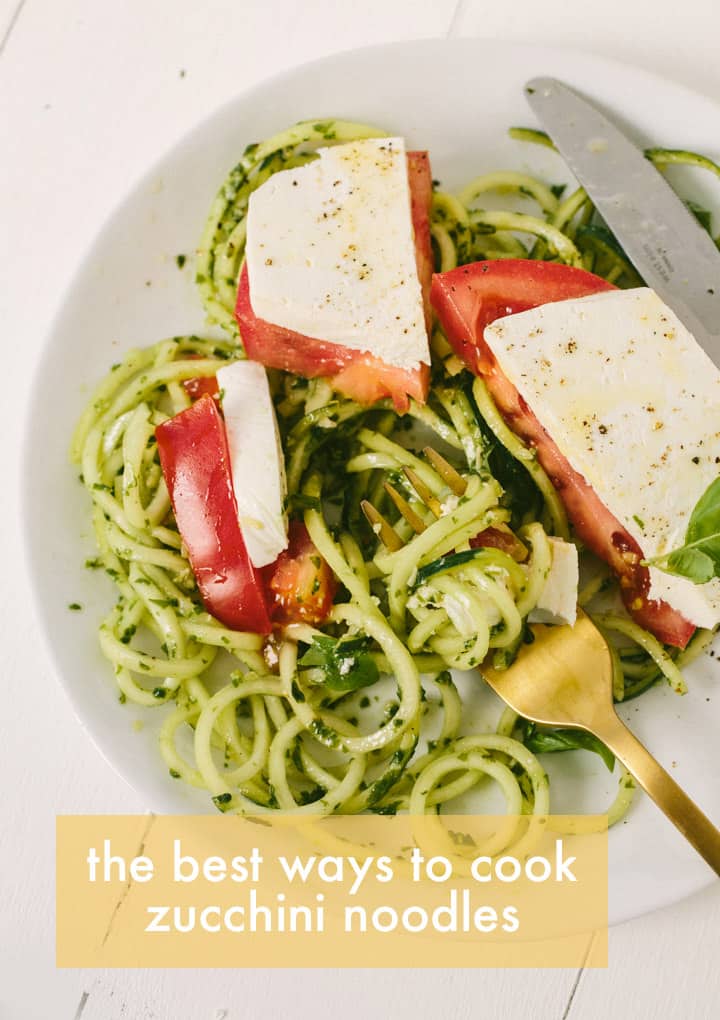 One of the questions I’m asked most frequently is, “What’s the best way to cook zucchini noodles?”

Zucchini can be tricky, because it’s made up of over 95% water and therefore, can get mushy and lifeless real quick.

With these tips and three best ways to cook spiralized zucchini, you’ll never have a soggy zucchini noodle again. Grab your Inspiralizer and start spiralizing!

Before I go over the three best ways to cook zucchini noodles (after you’ve spiralized them with a spiralizer), here are some “best practices” for cooking those green noodles:

Now that you know best practices, here are the best ways that I recommend cooking zucchini: 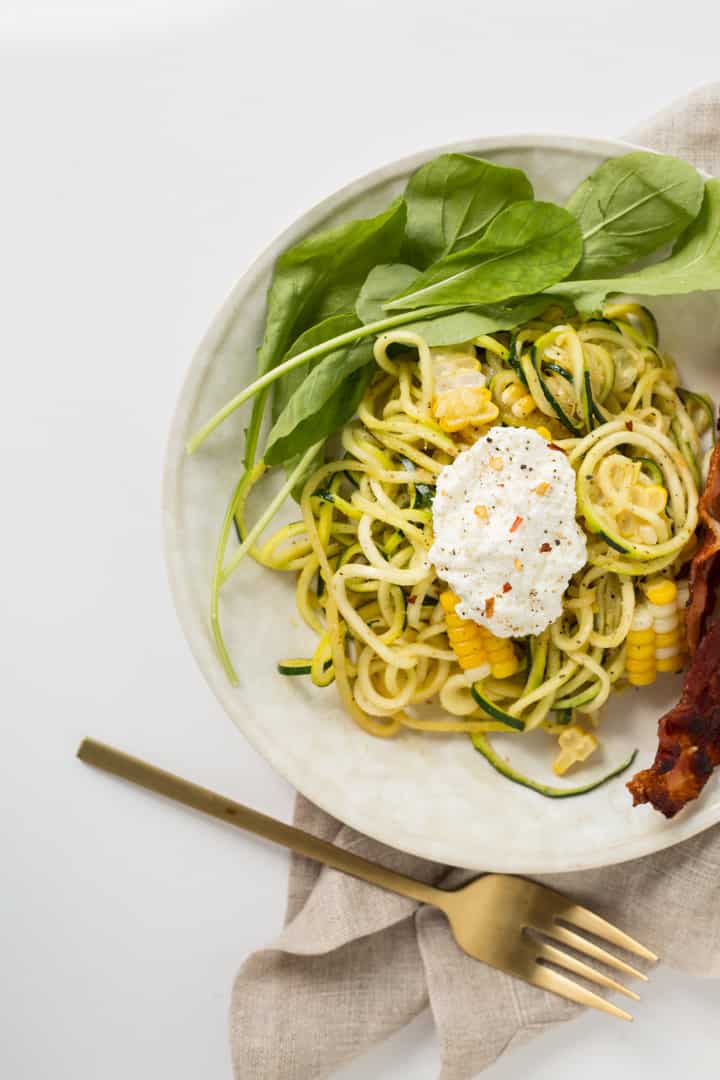 This is my favorite way to prepare zucchini noodles. Place a skillet over medium-high heat, add in some olive oil or cooking spray and once the skillet is hot (flick water in, it should sizzle), add in the zucchini noodles. Toss the zucchini noodles lightly with pasta tongs and cook for for 3-5 minutes or until al dente – don’t let the noodles cook for longer or else they’ll wilt and look lifeless. Embrace the crunch! If you’re cooking more than 1 spiralized zucchini, it may take up to 5-7 minutes to cook the zucchini thoroughly. Just keep tossing so that all zucchini noodles hit the bottom of the hot skillet and cook through.

Simmer in a broth 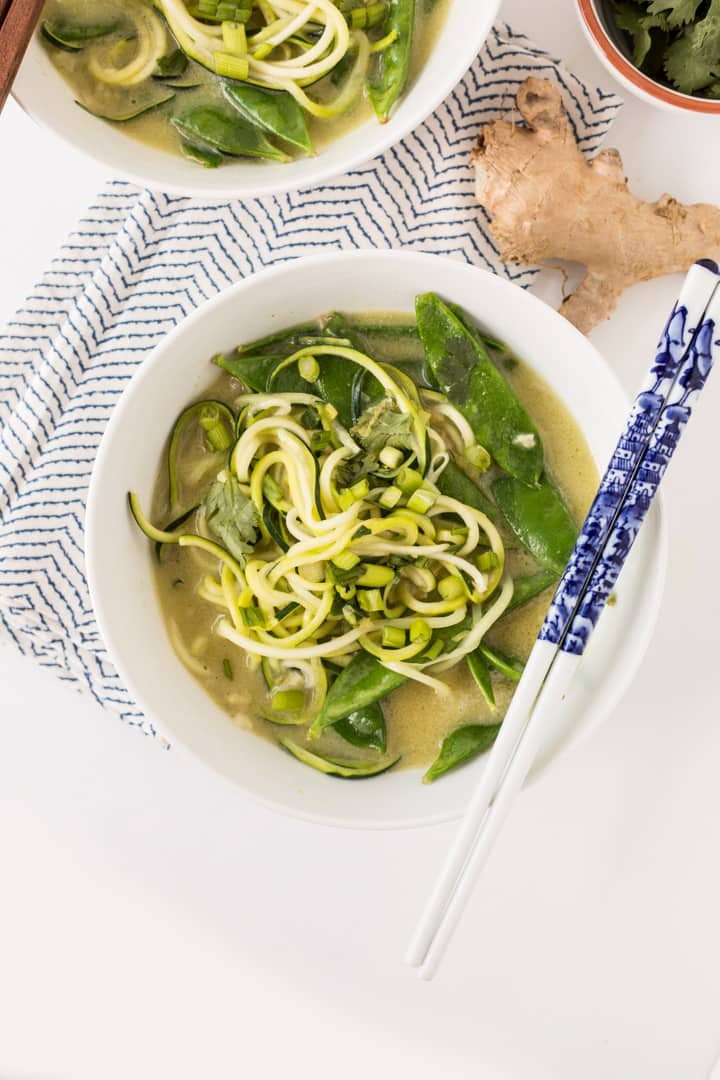 While you would think that adding zucchini noodles to liquid would make them mushier, it’s the exact opposite. Thanks to science (ya, osmosis!), when you add zucchini to liquid, the zucchini doesn’t release as much moisture, because it’s floating in moisture! Without getting too technical, the broth or soup liquid will keep the zucchini firm. However, moisture release is inevitable and does happen, so it will thin out the broth, diluting it with water. To combat this, add extra flavor to your broths, in anticipation of this dilution. For example, add an extra couple teaspoons of soy sauce to your ramen to counteract the few quarter cup of water that the zucchini will release over time. If you’re making a zucchini noodle soup and eating it immediately, you don’t need to do this, but if you’re letting the soup sit out for a while or saving it for the next day, it’s a good idea to add those extra seasonings.

Never boil your noodles to use them! If you’re keeping them in the liquid, that’s fine (like with ramens and the above curry noodle soup), but if you’re trying to boil them to then toss them into a pasta, I don’t recommend that at all – your dish will turn soggy and watery in seconds. 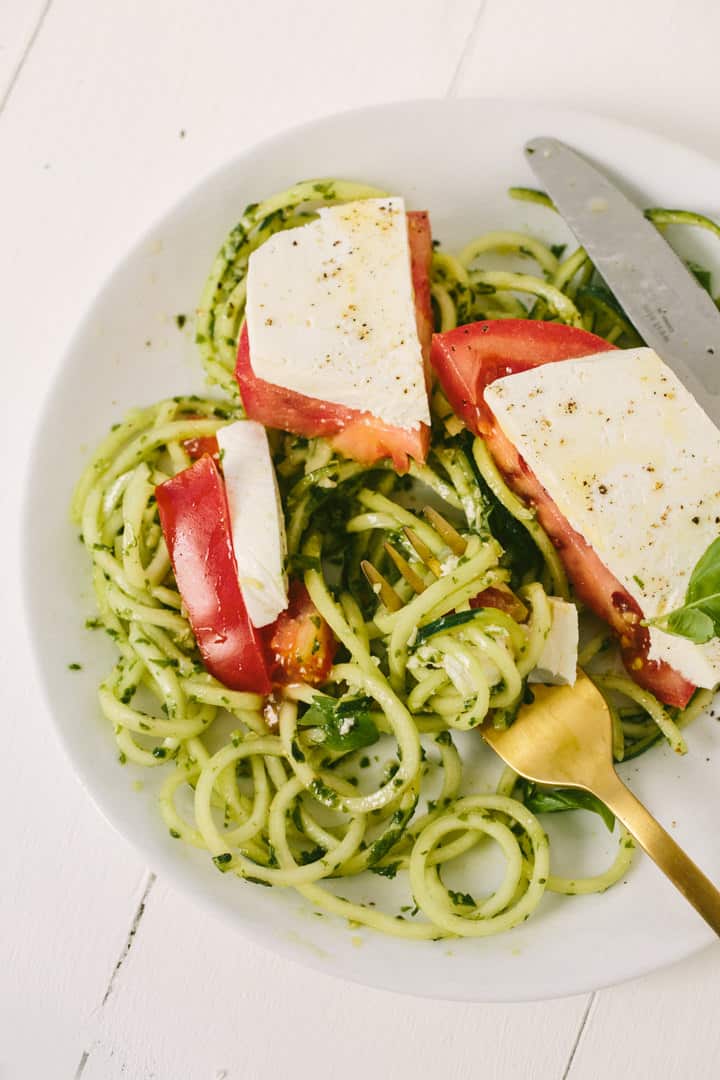 One of the most beautiful things about spiralizing is that it makes raw veggies into edible pasta! Save yourself the headache of cooking and toss them in a dressing or sauce raw! The best way to enjoy zucchini noodles raw is in a pesto, in my humble opinion. The pesto is creamy, flavorful, and coats the zucchini well. Aside from pesto, I love nut butter-based sauces (like my Thai Zucchini Noodle Salad, using almond butter.) It’s thick and creamy and the acids in the sauce “cook” the zucchini and naturally wilt it. However, a simple vinegar-based dressing will work wonders too – like my very popular Italian Zucchini Pasta Salad. With these types of dishes, the longer they sit, the more the noodles soften to the perfect consistency. Bonus points: they save well in the fridge for leftovers!

When I’m in a rush, I’ll heat up a sauce and toss the zucchini noodles with the hot sauce and as the noodles sit in the heat, they’ll soften slightly. The noodle will still mostly be crunchy, but it’s an easy way to prepare pasta without the worry of overcooking them.

Roasting zucchini is totally doable, just don’t roast the noodles alone! Roasting is time-consuming and not the best use of your zucchini! It will wilt it and it’s easy to over-cook the zucchini this way. If you do want to roast the zucchini, I recommend you do it in a casserole, like here: Chicken Tetrazzini with Zucchini Noodles.

If all else fails, if you’ve never seen my video on How to Avoid a Watery Sauce with Zucchini Noodles, check it out here: 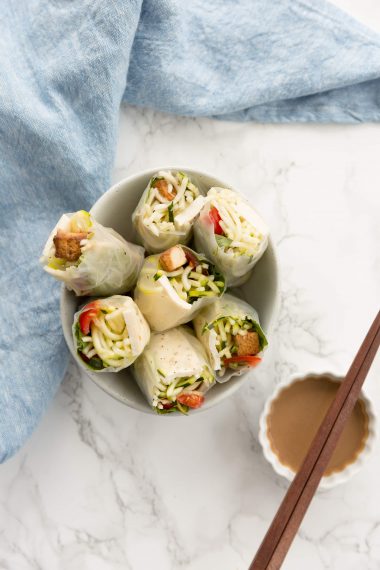 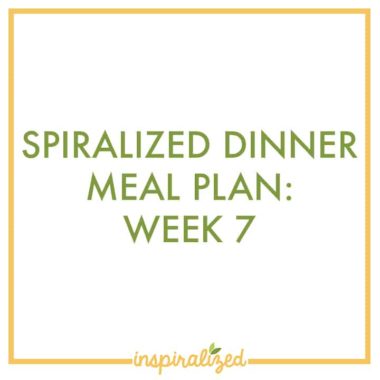 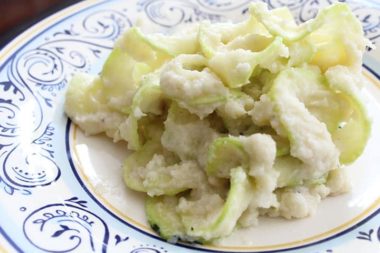 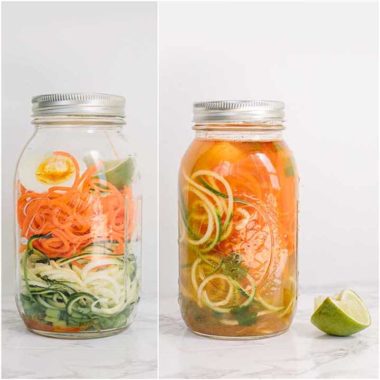 Pingback: Healthy Chicken Meatballs in Red Wine Sauce | Healthy Heart RD | Eat Chic Chicago
Pingback: Chicken and Spinach Alfredo | Health and Care
Pingback: Chicken and Spinach Alfredo | Health ,Beauty and Lifestyle
đánh giá Chevrolet spark says:
October 4, 2017 at 5:59 am
Thank you so much to the authors, these are the ways we can cook more delicious food is looking forward to receiving the author's writings.
Reply
Pingback: Seven easy ways to add vegetables to your family meals - Feeding Bytes
Pingback: Zoodles with Creamy Avocado Basil Pesto » She Lives Wholly
Donna Erickson says:
March 7, 2018 at 12:31 pm
Thanks for all the info on zoodles, about to try it today. Will let you know how it went.
Reply
Meaghan says:
March 7, 2018 at 4:47 pm
Yes! Please do!
Reply
Pingback: Zucchini Noodles With Blackened Chicken Recipe
Pingback: WHOLE 30: WHAT I LEARNED. WHY I QUIT. AND WHY YOU NEED TO TRY IT. - DemelerDemeler
Pingback: 17 Simple Food Swaps For Healthier Living
Pingback: How to Avoid Watery and Soggy Zucchini Noodles - Inspiralized
Vicki Steevensz says:
November 5, 2018 at 11:43 am
I LOVE spiralized vegetables! I saute them with chopped onions in a bit of olive oil. Before serving I add some lemon flavored olive oil (or a few lemon juice squeezes), salt, and black pepper. Fantastic!
Reply
Sue Ryze says:
August 22, 2019 at 12:29 pm
Never did I think zucchini noodles would be delicious. These are the best ways to cook them for sure!
Reply
laser chopsticks says:
May 18, 2020 at 7:42 am
Interesting blog and recipe! I will try it. Also, the tricks you shared are extremely helpful. I hope this will do wonder for me, too. Thanks for sharing.
Reply
Meaghan says:
May 18, 2020 at 10:50 am
We're so glad you found this helpful!
Reply