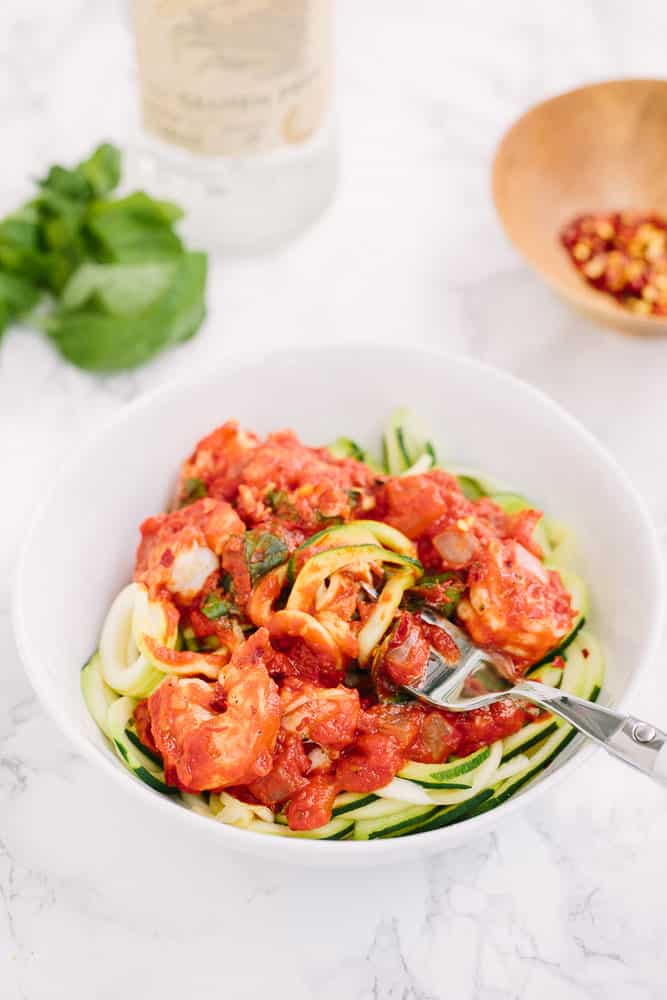 Summertime means a lot of things to me. And the meaning of summertime has changed as I’ve gotten older.

For instance, when I was a little girl, summer meant more arts and crafts and day camp. In high school, it meant summer reading and sports camps. In college, it meant internships and spending time with friends that were home from school.

Post college, it meant (and still means) spending as much time outside, outdoor BBQs, sun dresses, and enjoying great cocktails (outside). 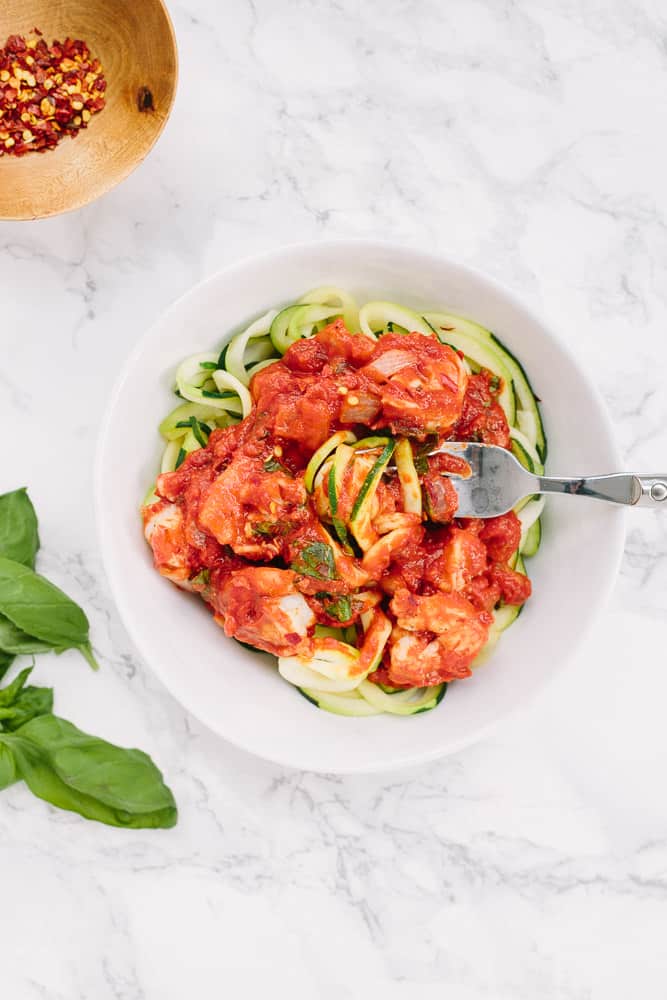 Now that I’m #inspiralized, I get to add one more thing to my meaning of summer: zucchini noodles.

I’ve been dreaming of making a spicy vodka sauce with zucchini noodles for awhile, and I’ve been saving it until it was a bit closer to true summertime.

For those of you who have celiac’s, avoid gluten for dietary preferences, or are simply trying to cut down on their gluten intake, this recipe is 100% gluten-free. And yes, it has vodka in it! For this recipe, I used Stoli Gluten Free vodka to add that vodka sauce kick. Stoli Gluten Free is made with naturally gluten free ingredients, 88 percent corn and 12 percent buckwheat. Pretty cool! 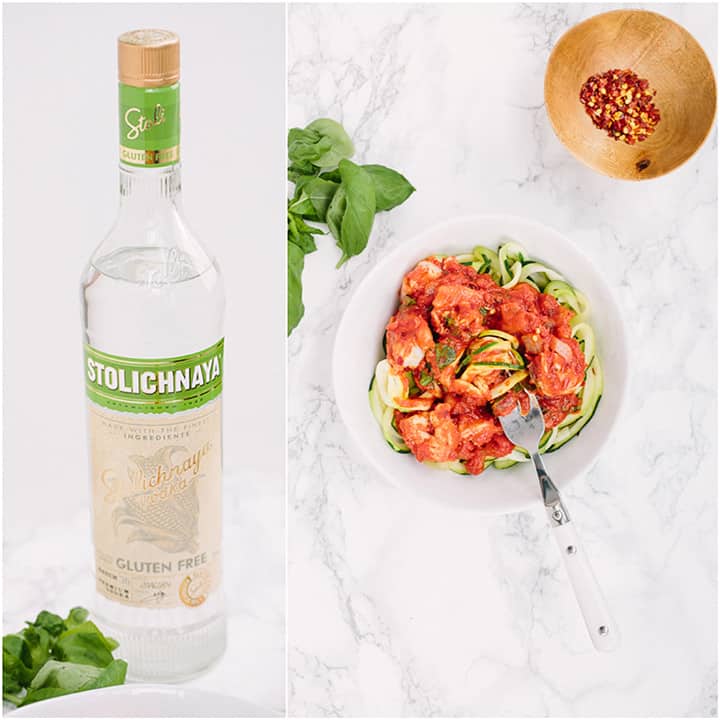 And I have to say, this vodka is so smooth! There are very few vodkas I like, because usually they’re way too alcohol-tasting, but this Stoli doesn’t disappoint. So, those of you who are gluten-free can now enjoy vodka sauces – you’ll just have to make them yourself! But it’s easy, because all you’ll need is a few simple ingredients and the Inspiralizer!

The basil is key here – so don’t skimp on it! It adds a freshness to this spiked pasta sauce and complements the flavors of the shrimp. If you can’t have shellfish, chicken will work just fine and if animal protein isn’t your jam, have it as is, or toss some cannellini beans for protein.

Note: This is a sponsored conversation written by me on behalf of Stoli. The opinions and text are all mine. 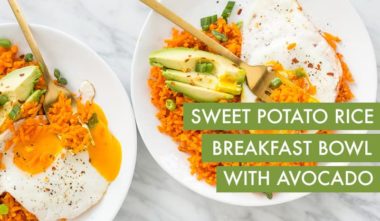 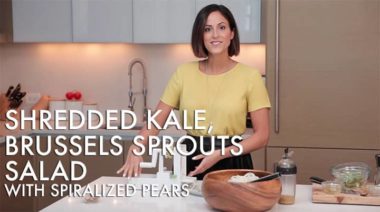 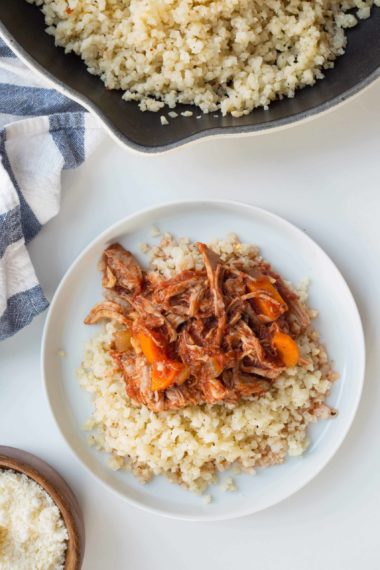 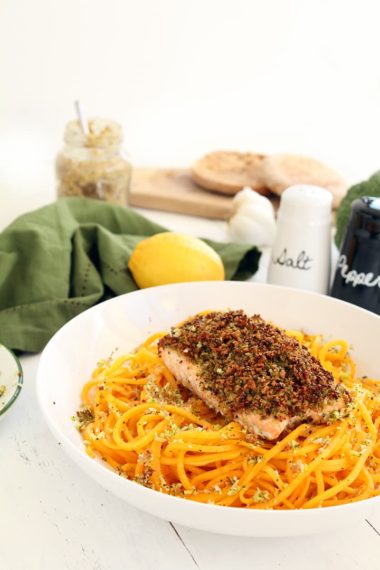 Hillary says:
May 23, 2016 at 10:07 am
I don't drink and try not to cook with alcohol... should I add something without the vodka?
Reply
Ali Maffucci says:
May 23, 2016 at 10:15 am
You can omit it!
Reply
Mary Beth says:
May 23, 2016 at 10:36 am
The WW Smart Points number is missing. I'm sure you calculated it. If so, can you add it, please? This looks delicious, and I can't wait to make it...maybe tonight! I just bought shrimp. I must have been reading your mind! Ha!
Reply
Ali Maffucci says:
May 23, 2016 at 12:21 pm
The post has been updated with WW points, sorry for the inconvenience!
Reply
Kim says:
May 23, 2016 at 11:41 am
Hi Ali sounds yummy I will omit alcohol as we have kiddos.
Reply
Jo-Lynne says:
May 23, 2016 at 4:40 pm
Where's the recipe. Photos look yummy
Reply
Ali Maffucci says:
May 23, 2016 at 6:30 pm
The recipe is here in the post!
Reply
Cassie Autumn Tran says:
May 24, 2016 at 10:20 pm
I eat zucchini noodles all year round! They're just way too irresistible to confine to one season. Anyways, I love the flavors that are combined in this recipe! The tomatoes and coconut together sound so incredible!
Reply
Linda S. says:
May 25, 2016 at 12:18 pm
Hi Ali, What can I use in place of the coconut milk?
Reply
Foodie says:
June 8, 2016 at 8:18 am
This meal sounds and looks so delicious! Will taste it this weekend :)
Reply
Cindy says:
June 21, 2016 at 5:18 am
Hi, looks yummy!http://www.probobble.com
Reply
Michelle says:
July 10, 2016 at 7:44 pm
I received my spiralizer yesterday and this was the first recipe I tried. All I can say is Yumm-o! Hubby and I both absolutely loved it! Thank you for an easy to follow delicious recipe that is packed with amazing flavor. The coconut milk made me a bit weary but I am sooo glad I used it. I was a little intimidated at first with how to cut and cook the "zoodles" but I watched your videos and you made it look so easy and foolproof! I can not wait to try more of your recipes. Thank you so much!
Reply
Meaghan says:
July 11, 2016 at 1:31 pm
Michelle! This is fabulous to hear. Thank you for sharing!
Reply
Pingback: List of Hitha Palepu's Favorite Items August 2016
Pingback: Luxury Real Estate for sale Marbella
Rachel says:
December 2, 2017 at 10:04 pm
This recipe is fabulous-great job hitting all these flavorful notes! Even my boyfriend found himself enjoying zucchini noodles once again to his surprise! I must say, I am a sauce addict and so I doubled everything in the sauce recipe except for the shrimp. I would definitely do it again, I would just reduce the red pepper flakes to about half the amount for my palate's comfort level. For those who like it hot, like my man, you are gonna love this!
Reply
Meaghan says:
December 4, 2017 at 11:19 am
Thanks, Rachel! We're so glad you all enjoyed this dish so much.
Reply