Baked Salmon & Sesame Butternut Squash “Soba” Noodles with Broccoli (at Against All Grain!) 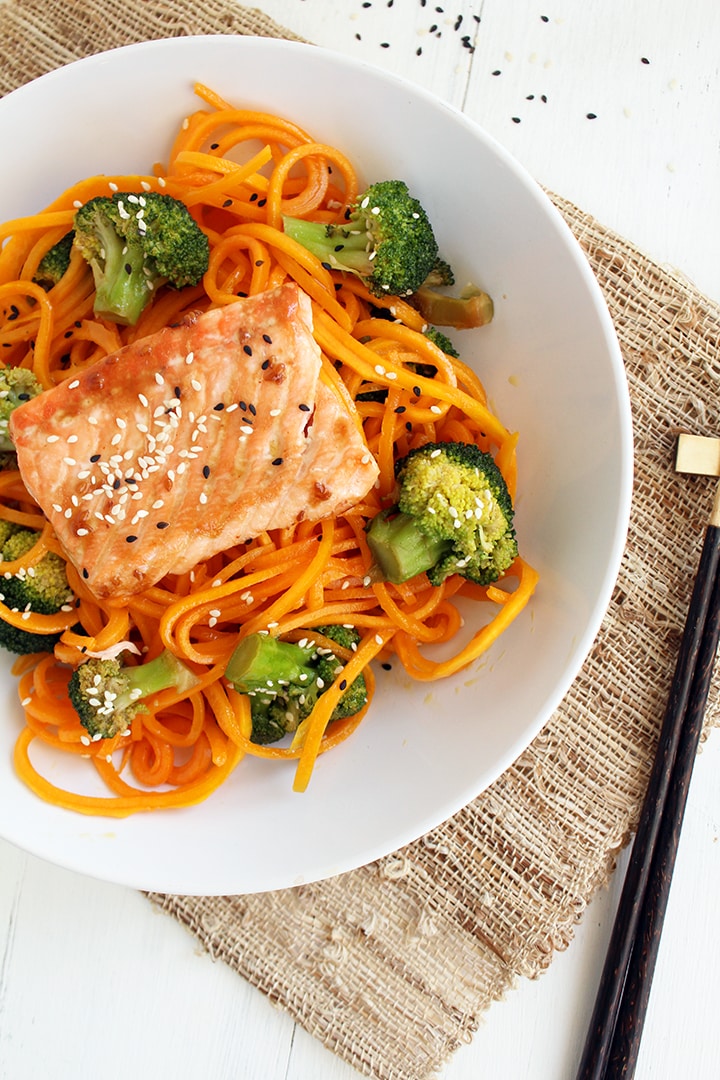 I’m a big fan of Danielle Walker’s cookbook and food blog, Against All Grain. Not only does she whip up some incredibly healthy Paleo and gluten-free recipes, she’s a mother and wife. Plus, she lives in the San Francisco Bay Area (uhm, totally jealous about that). Her health story is inspirational, so make sure you check that out on her blog. It’s no wonder she’s on the New York Times Bestsellers List!

Obviously, when she reached out to me and invited me to guest post on her blog, I was all sorts of giddy. I’m happy to make a recipe for her loyal readers but also, I’m excited to introduce her to my readers (in case you don’t know of her already!) 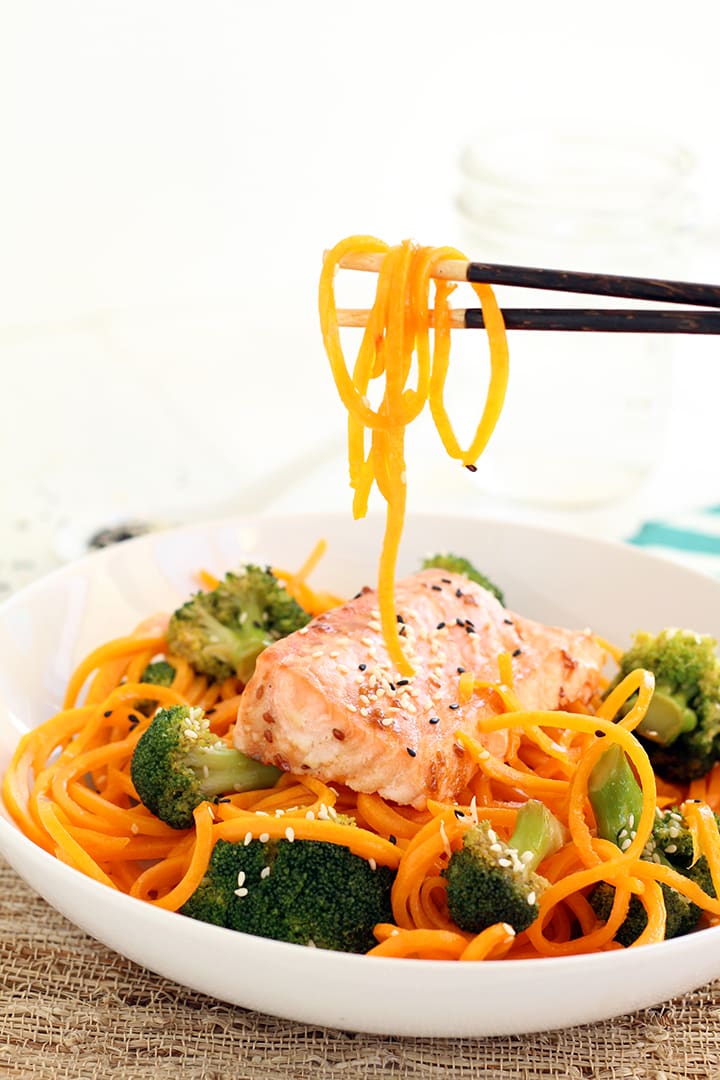 Before I forget, check out my recipe on her blog, posted Wednesday!

Like me, Danielle’s a self-taught cook. When I decided to pursue Inspiralized, I thought to myself, “hmm.. should I go to culinary school?” Then I immediately thought, “well, what would that do for me?” Since I’m not currently in school, you can guess that I came to the conclusion that being a great cook doesn’t require going to school. I think that some people are born with a creativity and a determination when it comes to food. If you don’t really like cooking the same thing twice, you can relate. 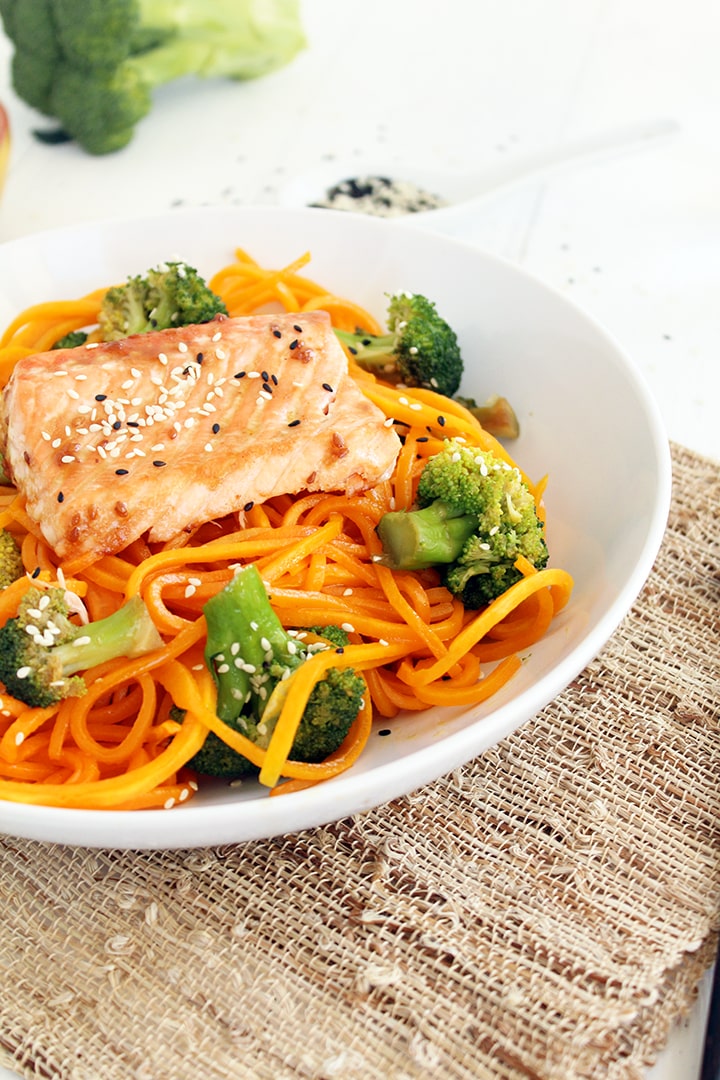 Actually, Lu jokes around with me about my disinterest in leftovers. I rather finish a double portion than put it in the refrigerator for “next time.” He manages to bring it up when we’re out with friends, teasing me. In the end, he wins – he eats something new most nights! 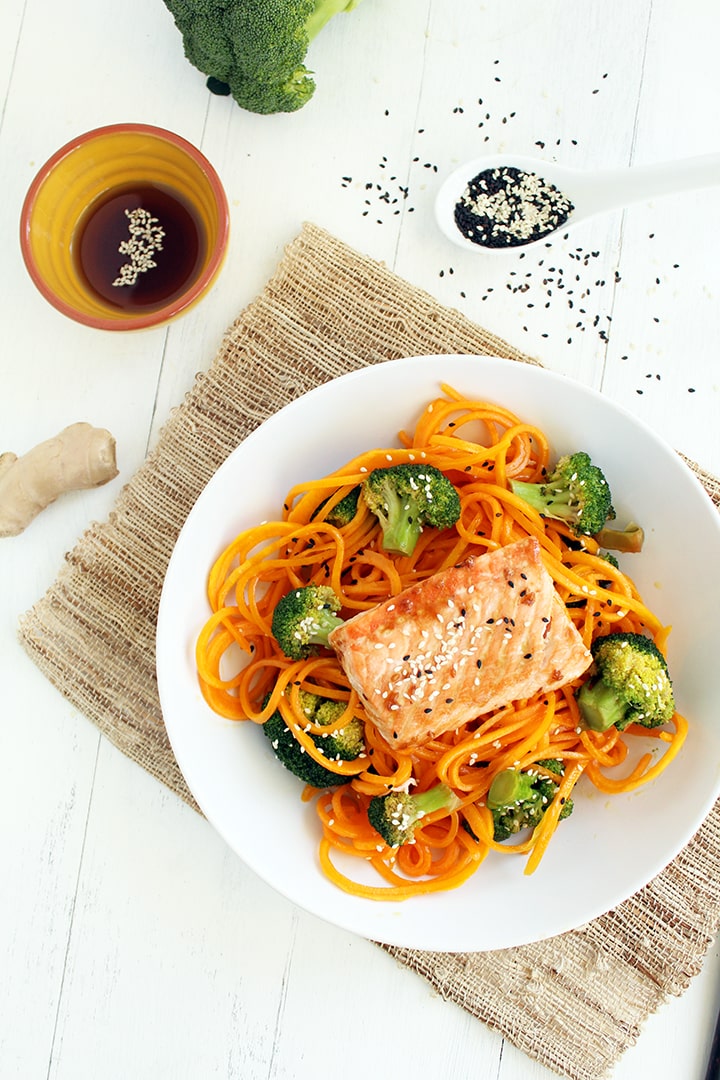 Don’t get me wrong, I’m definitely a “go to” dish sort of gal. I just tweak it each time – kale instead of spinach, shrimp instead of tofu, tomato sauce instead of pesto. 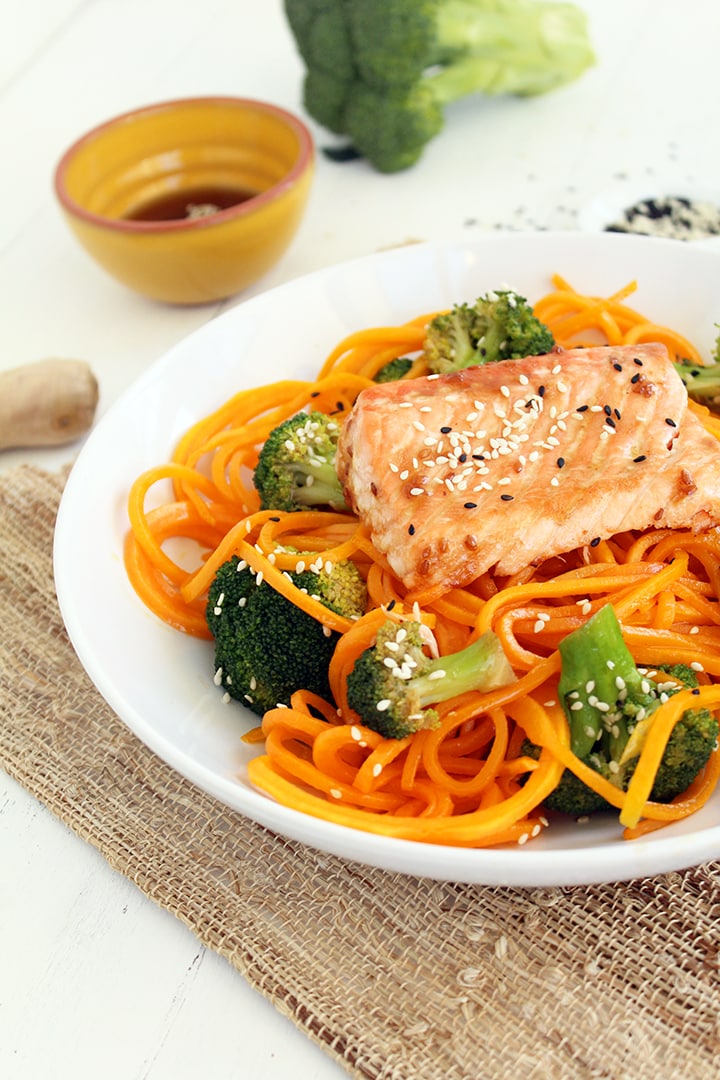 And that’s my schpeel. Back to the recipe… seriously, read all about it on Against All Grain today. Butternut squash noodles are quickly becoming a new favorite – I’m going to be sad to see them go once zucchinis are back!

Here’s a video tutorial for how to spiralize butternut squashes (they’re a bit tricky!) 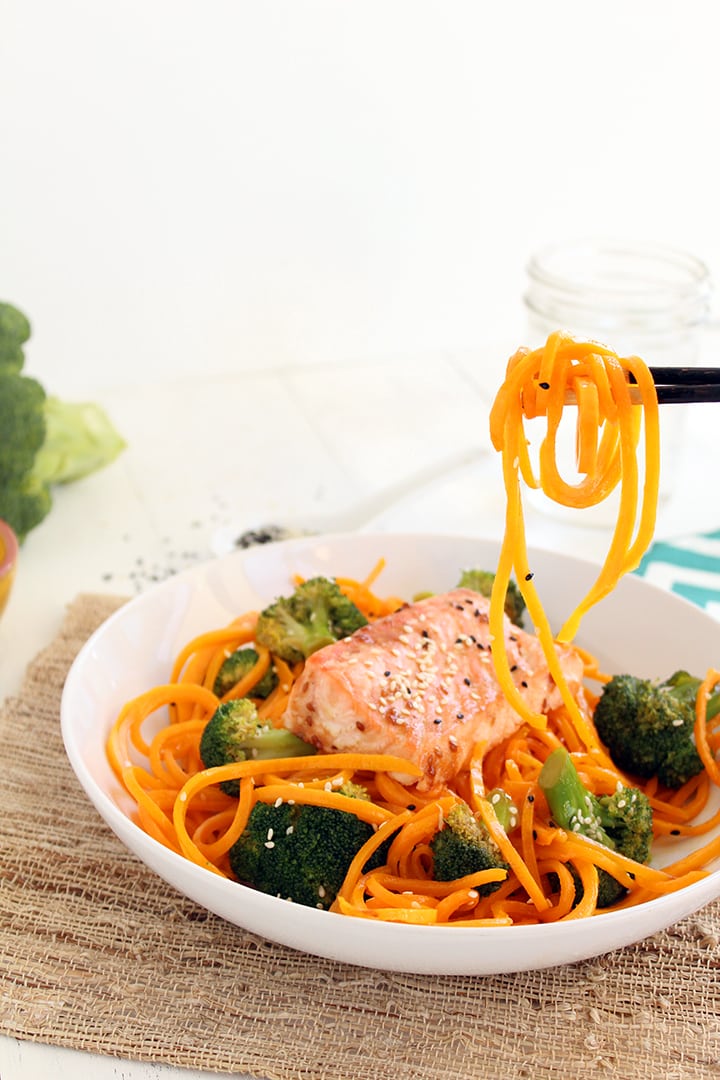 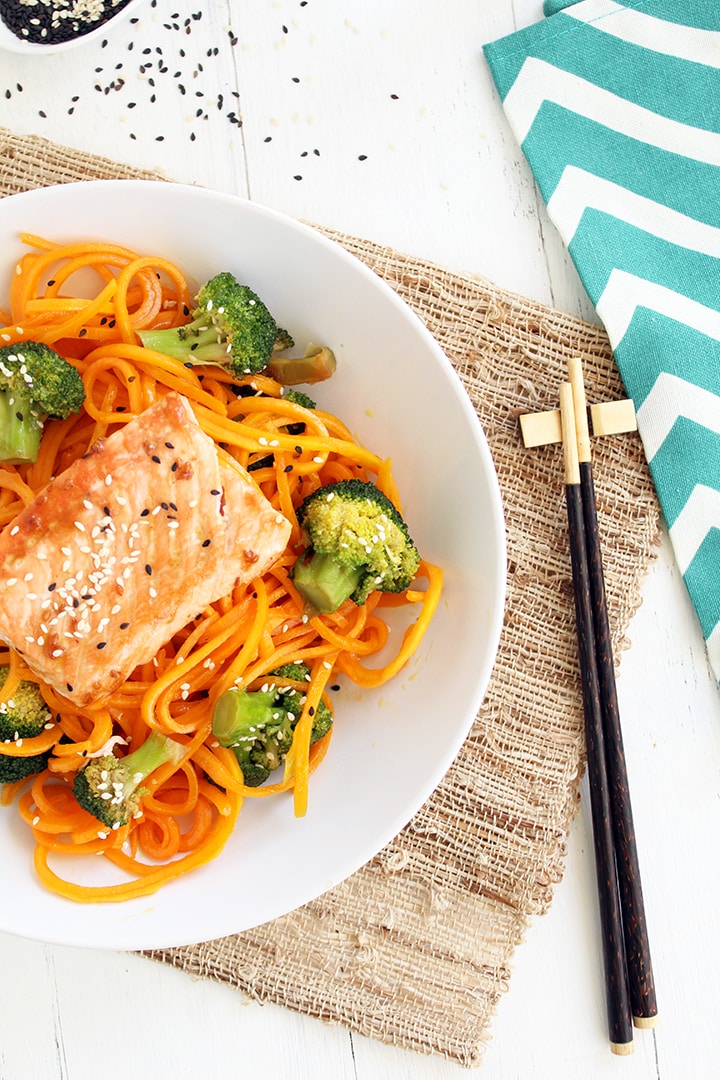 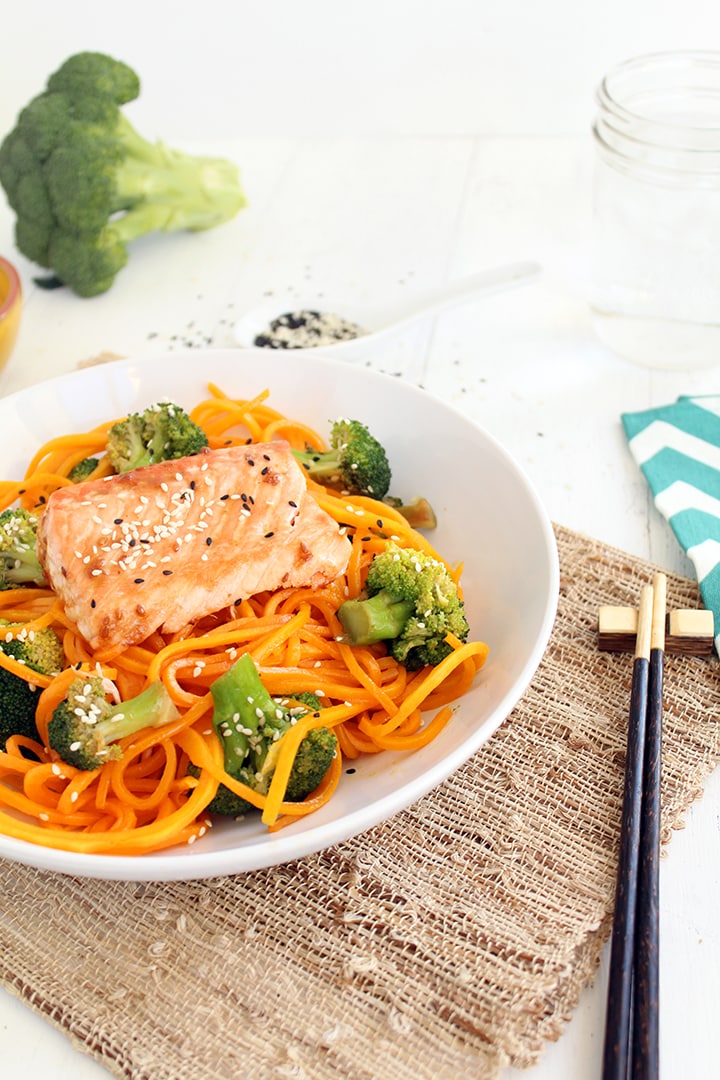 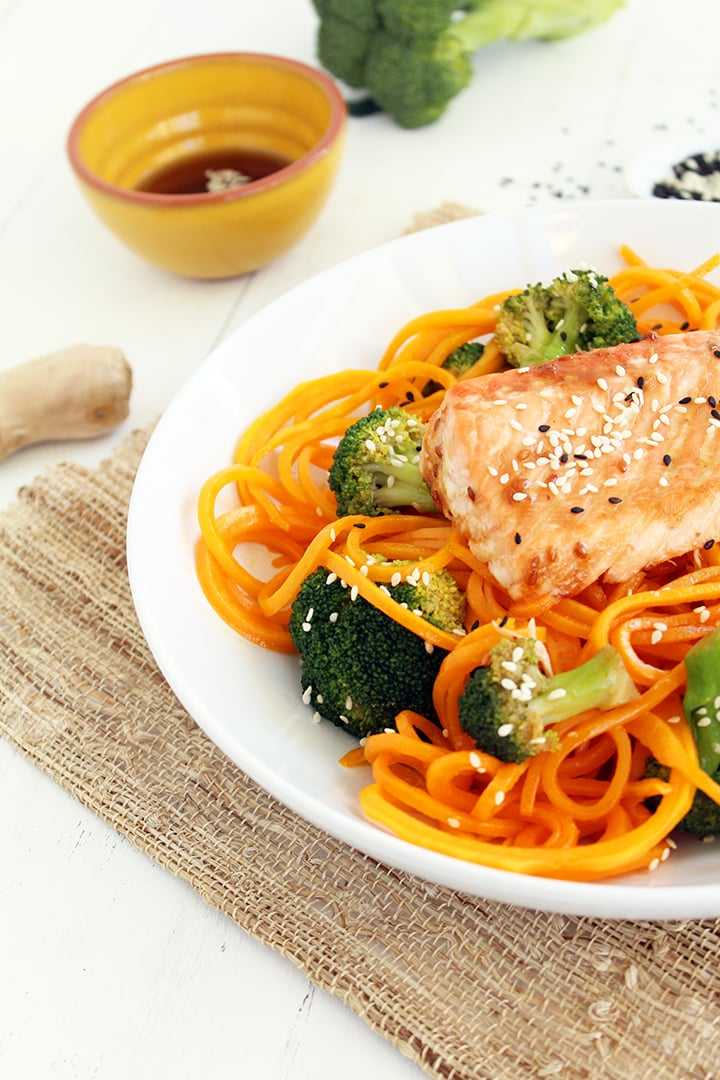 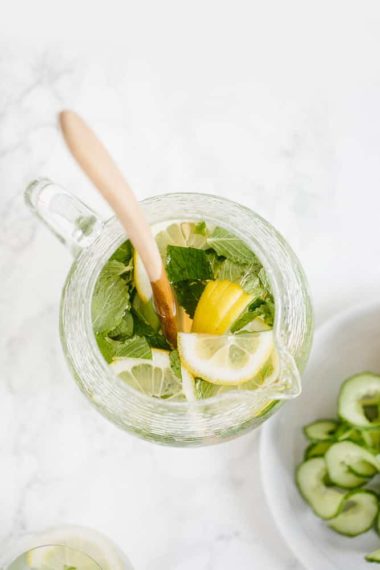 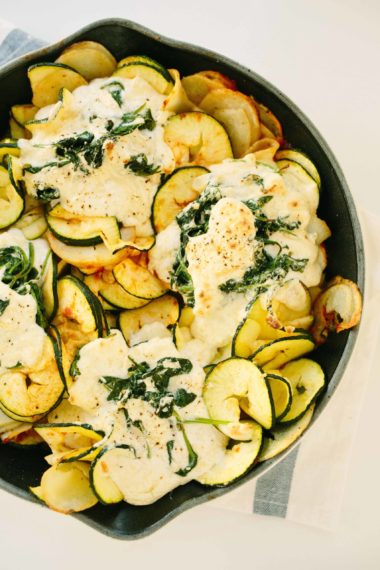 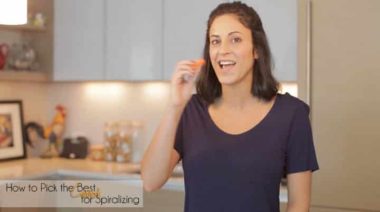 Video: How to Pick the Best Carrot for Spiralizing + 3 Healthy Thanksgiving Tips 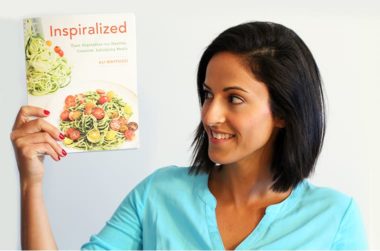 The Inspiralized Cookbook is On-Sale + My (Other) Big News!

Emily H says:
December 20, 2013 at 3:53 pm
I just found your blog through the Lean Green Bean's blog. I love it!! We've actually been recently trying veggie noodles at home using a julienne peeler and they are so delicious. We've been trying to find more recipes, and I can't wait to try some of yours! Beautiful pictures as well!
Reply
Alissandra Maffucci says:
December 20, 2013 at 5:37 pm
Thanks Emily! You are so sweet - make the leap to a spiralizer and you'll never look back!
Reply
BrunchTimeBaker says:
December 20, 2013 at 8:12 pm
This is such a beautiful and healthy dish! I love the vibrant colors. Looks so good that I would feel bad eating it!
Reply
Alissandra Maffucci says:
December 20, 2013 at 10:55 pm
Thanks!! It is very pretty - but worth ruining to eat! :)
Reply
Tea says:
January 2, 2014 at 1:45 am
I love your blog! I recently picked up the spiralizer and while it works great with zukes, I couldn't get it to work with the butternut squash. I followed your instructions (and video) and it doesnt seem to want to slice the squash into strands. I just get large round slices. Any idea what I'm doing wrong? Thank you!
Reply
Alissandra Maffucci says:
January 2, 2014 at 1:33 pm
Perhaps your butternut squash pieces are too large? Sometimes putting in a lot of elbow grease can make all the difference! Some noodles will stick together, you just have to pull them apart. Happy spiralizing !
Reply
Pingback: Sweet Potato Noodle Shrimp Puttanesca | Inspiralized
Anonymous says:
August 21, 2019 at 8:21 pm
where is the actual recipe?
Reply